The Pitch: Life Day hits television screens for the first time since 1978! In a streaming special inspired by the infamous original, this time it’s the Sequel Trilogy characters who join together for some holiday cheer on the Wookiees’ home planet. Rey aims to teach Finn the ways of The Force. Poe tries to (nigh-literally) cook up the best Life Day ever. And Rose, Chewie, and a gaggle of droids try to keep the whole thing from going off the rails.

But wait! Discouraged over her pupil’s lack of progress, Rey leaves the celebration early to seek out a special key, one that can only be used on Life Day, which she hopes will show her how to become a worthy teacher. Instead, it sends her careening through a rush of familiar moments from Star Wars history. As she meets friends new and old along the way, the budding Jedi Master must learn the wisdom of other mentors and students past and set the timeline right again.

A Remix of Bricks: The most fun choice that the special’s creative team makes is to match their approach to how kids play with LEGOs in real life. Unbound by canon and continuity — in direct contrast to us persnickety curmudgeons — children mix and match different eras and characters, going with whatever combinations seem cool or amusing rather than limiting themselves to what makes sense.

Rey’s mystical key allows the special to take the same tack on the screen. She traipses through recognizable landing spots from the Prequel Trilogy, the Original Trilogy, the Sequel Trilogy, and even The Mandalorian on her journey. The twists and detours might feature an old Han Solo blasting rival bounty hunters alongside his younger counterpart, or three eras’ worth of Obi Wans meeting and greeting each other, or even some Vader-on-Vader combat. Following in the brick-imprinted footsteps of The Yoda Chronicles, the various time portals in play allow the special to cross-pollinate good guys and bad guys from different points in the timeline, adding a fanciful “dream match” flair to the proceedings. 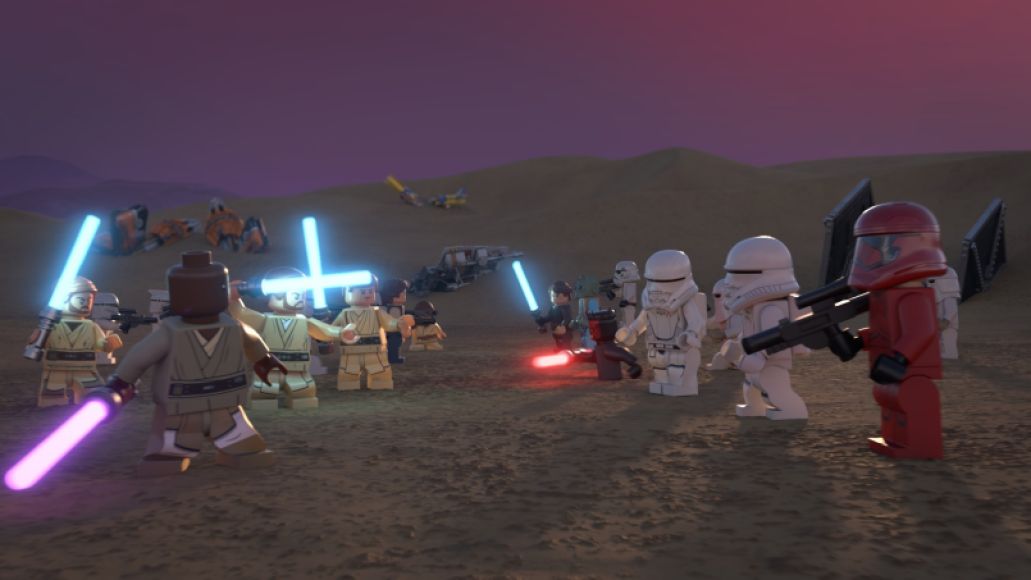 It’s also a mash-up of voice actors from different parts of the franchise. The special brings back Anthony Daniels as C-3P0, Billy Dee Williams as Lando Calrissian, and Kelly Marie Tran as Rose Tico from the live action films. (None of them has much to do, but by gum, they’re there!) It also features a number of The Clone Wars alums like Matt Lanter as Anakin Skywalker, James Arnold Taylor as Obi Wan Kenobi, Tom Kane as Yoda, and Dee Bradley Baker as the Clone Troopers. And, naturally, a number of performers from past LEGO Star Wars projects reprise their roles as well, like Matt Sloan (of Chad Vader: Day Shift Manager fame) as Darth Vader, Eric Bauza as Luke Skywalker, Trevor Devall as Emperor Palpatine, and Helen Sadler as Rey.

In truth, not all of these mix-em-ups work, and many of them are too glancing to elicit much in the way of thrills, awws, or yuks. But if nothing else, the special’s premise aligns nicely with how its younger viewers imagine and combine these worlds on their own.

Laugh It Up, Fuzzball: The special’s humor is cute and gentle, if not exactly uproarious. Writer David Shayne (who has LEGO Star Wars experience with credits on The Freemaker Adventures and LEGO Star Wars: All-Stars) definitely takes a lighter, sillier approach to the franchise, which fits the loose, “anything goes” tone of the brick-centered corner of the Galaxy Far Far Away.

That said, there are more chuckles than belly laughs here. In truth, there’s not much left to poke fun at from the pre-Disney era of Star Wars that hasn’t already been joked about to death by now. Rest assured, there’s a “Han Shot First” bit, a “Do or do not; there is no try” riff, and a gag about how many Star Wars characters end up falling down long shafts. Shayne and company also return to a dynamic between Palpatine and Vader — akin to Michael Scott and Dwight Schrute — that’s been present in most prior LEGO Star Wars projects. 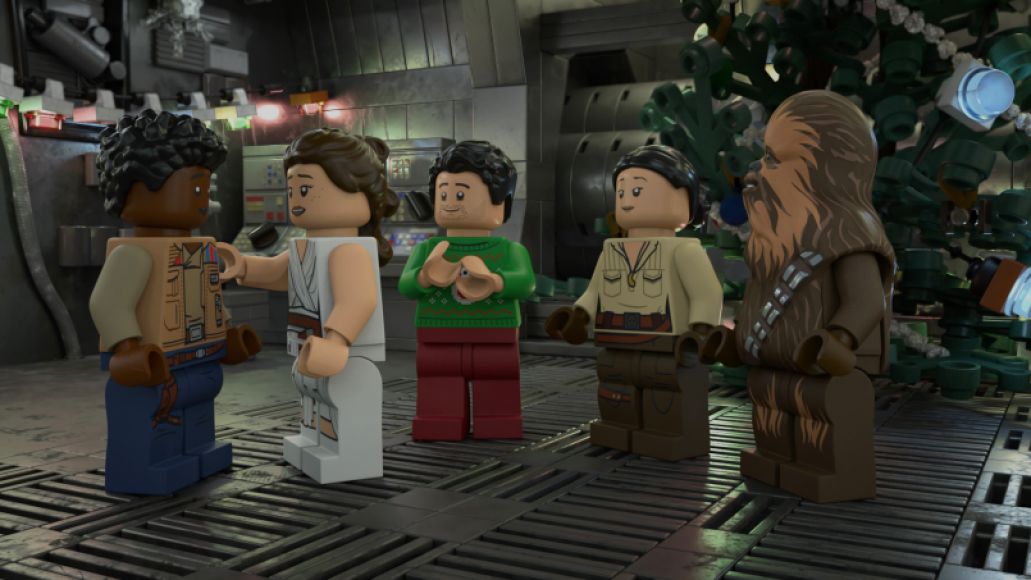 Still, the team gets the most mileage out of jokes about the newer, less-picked over material: from shirtless Kylo Ren, to the impermanence of the Emperor’s demise, to Kylo’s propensity to betray his various masters and paternal figures. Despite the presence of Chewbacca’s family and a disco ball, there’s more homages to Disney’s theme park outpost than to the special’s 1978 originator. Even then, many of the references here are ones the Internet has already digested for longer than a sarlacc. Obi Wan says “Hello there.” Greedo says “Macklunkey.” And people coo over how cute Baby Yoda is.

The LEGO Star Wars Holiday Special still largely works as a light-hearted “greatest hits” from the Star Wars Galaxy, but doesn’t offer much in the way of new comic takes on the franchise’s shaggier elements.

And May All Your Force-Users Be Light: The 1970s Star Wars Holiday Special, disaster that it was, still anchored itself around laudable notions of family, compassion, and joy that George Lucas viewed as the most worthwhile ideals for the holiday season. Its 2020 equivalent commendably follows the same path in its themes (albeit thankfully not in execution). The new special builds its narrative around Rey learning the value of the connections she’s forged with her found family, beyond just the skills and knowledge she’s acquired. The moral is simple and age-appropriate (and tastefully ignores how many of the past friendships the special praises ended in fiery disaster), but it’s a good one nonetheless.

That notion also extends to the other characters’ efforts to put together the perfect Life Day celebration, which only comes together when a host of familiar faces from The Rise of Skywalker and other franchise installments show up to prove the old adage of “the more, the merrier.” The lessons here are basic, but work for a kid-friendly audience and, more to the point, track with Lucas’s original goals for Life Day and a holiday special celebrating it, however garbled both may have been back in the Seventies.

What’s Streaming on Disney+ in November 2020

The Verdict: Despite a charming shoutout to Rudolph the Red-Nosed Reindeer, this LEGO Star Wars Holiday Special is unlikely to become the same sort of perennial holiday season fixture. Its intentions are good; its premise is fun and creative, and its jokes are amusing enough. But the special never quite finds the magic that elevates both festive T.V. classics and Star Wars’ most memorable tales.

Still, it’s a pleasant, if not overwhelming, way to dip back into the Star Wars Galaxy at the holidays, especially if you’re hoping to watch some of your favorite characters alongside your favorite younger Star Wars fans. The special never hits the glorious highs of the franchise’s best outings or the comically bad lows of its notorious predecessor. Instead, it occupies a mild but amiable middle, not quite achieving the balance of The Force, but thankfully not provoking 20 minutes of agitated Wookiee growls either.