This review originally ran in September 2020 as part of our coverage of the 2020 New York Film Festival.

The Pitch: In 1968, Notting Hill was a slowly-growing hub of Black culture in London, filled with West Indian immigrants of various stripes who congregated at Frank Crichlow’s (Shaun Parkes) Mangrove Restaurant for spicy food, pumping beats, and a sense of community. But when sustained police interference with the restaurant — constant raids, fines and charges for prostitution and drug possession — led to a protest that turned violent, Crichlow and eight other defendants were brought in front of the Old Bailey on charges of incitement to riot.

But this trial wouldn’t be like Black Power trials of the past: the Mangrove Nine, including Crichlow, Black Panther activist Altheia Jones-LeCointe (Letitia Wright), Darcus Howe (Malachi Kirby) and the rest, along with young lawyer Ian McDonald (Jack Lowden), would use unusual tactics and incredible preparation to vie for their innocence. And in so doing, they’d fight one of the earliest, most vital battles in the war for racial equality in Great Britain. 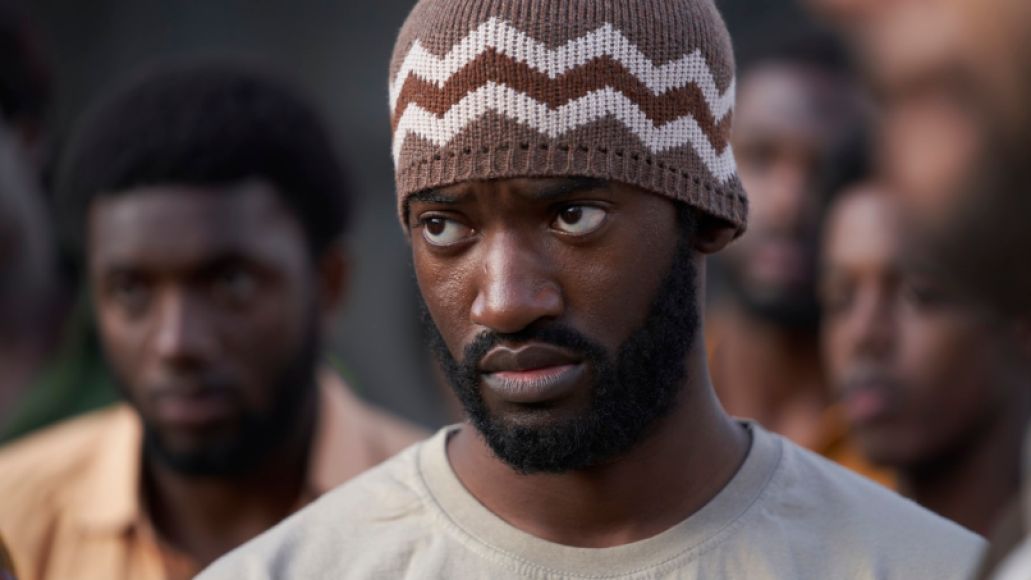 You Are the Big Tree: Like NYFF opener Lovers Rock before it, Mangrove is just one part of director Steve McQueen‘s Small Axe anthology, a series of five films chronicling the history and flavor of the Black West Indian community in London in the 1960s through the 1980s. But where Lovers Rock is a kaleidoscopic portrait of Black joy with no direct tie to specific historical events, Mangrove, and presumably the others in the anthology, are hard-hitting docudramas about important victories in Black British history.

In its opening act, McQueen and co-writer Alistair Siddons situate us in the tentative joy of ’68 Notting Hill, where the Mangrove hums with vibrant energy and joy. But from the start, all is not well; happiness is fraught with tension, as coppers (led by Sam Spruell’s unapologetically racist PC Pulley) delight in raiding the place, and even play card games where whomever draws the ace of spades has to go out and “clap the first Black bastard they set their eyes on.” The community they’re terrorizing bubbles with tension; Notting Hill is a powder keg, one egged on by the police so they can crack skulls once the community voices their displeasure in the form of protest. Sound familiar?

Trial of the Mangrove Nine: It’s fitting that Mangrove reviews are coming out at the same time as Aaron Sorkin’s The Trial of the Chicago 7, another courtroom drama about police brutality that at least gestures toward racial injustice in its portrayal of Bobby Seale. But for all of Sorkin’s writerly dexterity, there’s something more immediate, alive, and visceral about Mangrove on a filmmaking level that elevates it beyond the TV-level dramatics of his Netflix film. DP Shabier Kirchner (who shoots all of the Small Axe films) soaks the Notting Hill and Old Bailey settings with stark, affecting 35mm, the grain and desaturated lighting immersing us in the historicity of the proceedings. 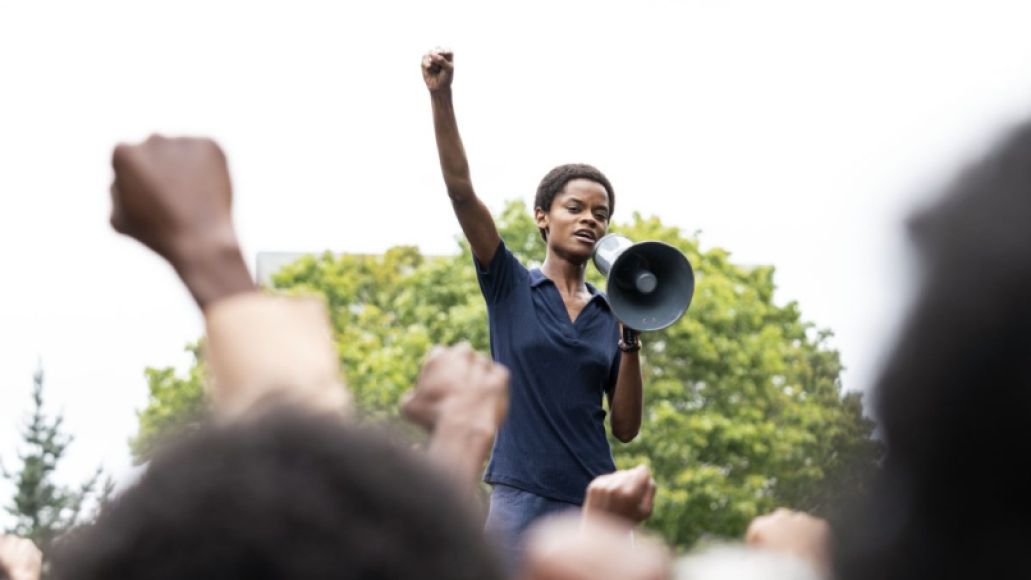 Mangrove is a film told in textures — the turtlenecks and wide-lapeled jackets of Lisa Duncan’s period-appropriate costumes, the silhouette of Wright’s character reflected in a rain-dappled windshield, the creaks and groans of chair legs as they move across the floor of conference rooms. Kirchner recognizes when to keep his shots held in close-up on an actor’s face, when to go for documentary immediacy and when to film the imperious Judge Edward Clarke (Alex Jennings) from a low angle to capture every whit of his foppish dismissiveness. All told, Mangrove is visceral, immediate filmmaking, which only serves to give McQueen and Siddons’ incredible script added import.

We Must Be the Protagonists of Our Own Stories: Underpinning all of Mangrove‘s formal mastery is a great ensemble of English actors, many of whom are relatively unknown outside of British character roles. Spruell glowers with barely-restrained menace as the main copper we follow, a case study in the ways white police officers absorb and reinforce racist systems in ways they take as gospel. Lowden fills MacDonald with enough youthful piss and vinegar that every glower he can eke out of the Jennings’ stuffy judge feels like a victory itself.

But the soul of McQueen’s film rests on Wright, Parkes, and Kirby, who hold great swathes of Mangrove on their mighty shoulders, both inside and outside the courtroom. Kirby’s Darcus Howe gets some of the most potent exchanges in the courtroom, cross-examining his witnesses and charming the jury with a passion borne of desperation. Wright is fantastic as usual, her firebrand activist fueling many of the film’s most passionate exchanges (including a scorcher of a confrontation in a courtroom about whether to plead out and give up: “We are the example, and we must bear this responsibility!”). It’s awards-worthy stuff, her voice filled with the ache of an entire community that’s never seen justice in its lifetime. 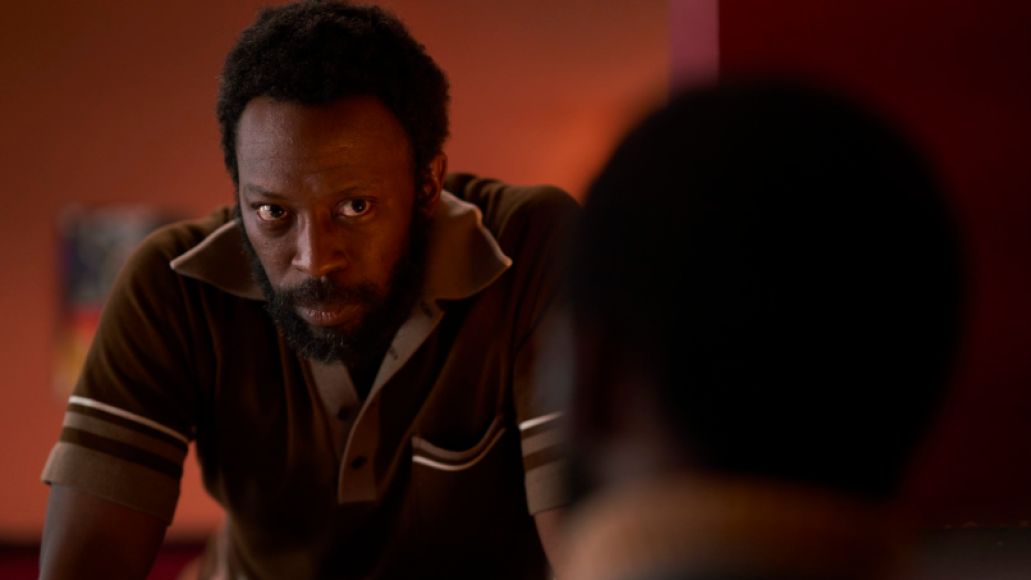 But it’s Parkes who hums with quiet dignity and intensity as Crichlow, a man who only ever wanted to open a restaurant and inherited a revolution. He’s someone as frustrated by the racism he experiences on the daily as the responsibility that comes with merely existing as a Black businessman in Notting Hill. He’s far from a revolutionary — that’s Jones-LaCointe’s role — but circumstances thrust him into the role of unwitting symbol. Parkes and McQueen never elevate him past that, and play with that tension to striking effect. He’s Atlas, holding an entire world on his shoulders, even though he never asked to. And when he occasionally buckles under the weight, it’s the others who keep him afloat. It’s a testament to the power and solidarity of the Black community, one which celebrates each other’s victories and laments one person’s defeat as if it’s their own.

The Verdict: Mangrove elevates the oft-creaky genre of the courtroom drama with striking, evocative compositions, stunning performances, and a real sense of place. If the rest of the Small Axe anthology is as good as the two we’ve seen thus far, then McQueen can lay claim to one of cinema’s greatest flexes — crafting five stunning masterpieces in the same year.