The Foo Fighters Re-Emerge: “2020 was gonna be the best year ever!” Dave Grohl said, his fists clenched. “We had plans, man!” The last time the Foo Fighters played a full set together, they were closing down the Supernova stage of the Intersect Music Festival last December. Eleven months and several decades later, the COVID-19 pandemic upended each and every one of the Foo Fighters’ carefully laid schemes for the year, including multiple tours, a band-curated festival, and the release of their 10th studio album, Medicine at Midnight. In order to reclaim some of 2020’s promise and build momentum for 2021, the band returned Saturday night with a livestream show emanating from venerable Los Angeles rock club the Roxy. In addition to giving the band a chance to shake off some rust and reconnect with fans, the show also benefited the Sweet Relief Musicians Fund, a non-profit charity that “provides financial assistance to all types of career musicians and music industry workers who are struggling to make ends meet while facing illness, disability, or age-related problems.” 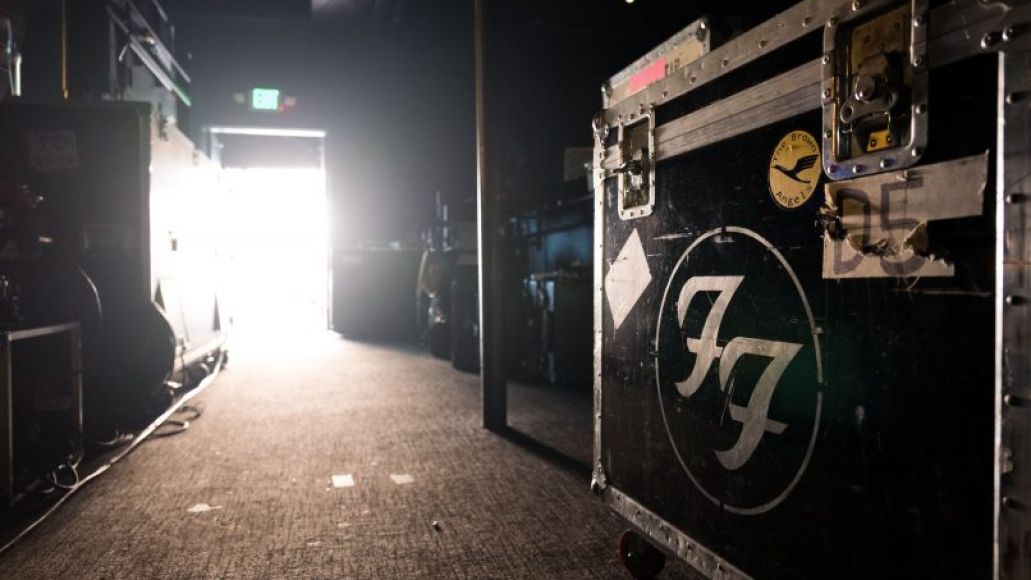 A One-Show Tour: About those plans: like everyone else in the world, the Foo Fighters had prepared for a much busier 2020 before COVID-19. In celebration of their 25th anniversary, the band was set to recreate the itinerary of their first-ever tour from 1995, a trek that would’ve taken them from Ontario all the way to Phoenix in a diagonal cut across the United States and Canada. The Foos were also set to rock the capital with a band-curated Fourth of July celebration called DCJam and hit Europe for a string of summer festival dates. Circumstances reduced that ambitious schedule to last night’s livestream, a fact of the times cheekily alluded to on the “tour” t-shirt for the event; sporting a logo inspired by event sponsor Coors Light on the front, the shirt’s back featured just one date in the space usually reserved for a long list of appearances.

Beer Can Cam: Speaking of Coors Light: viewers who logged on early were treated to shots from the brand’s POV-style Beer Can Cam, which followed one Silver Bullet from the Roxy’s neon-splashed facade, through the temperature check (reading: LO), and into areas of the club usually reserved for artists and crew. As product placements go, it was pretty harmless; the floating disembodied can mostly felt borrowed from a GoldenEye level set at a frat party. The actual behind-the-scenes footage was more valuable, if only to remind everyone at home about the sound and lighting engineers, security personnel, and guitar techs whose hard work makes events like this possible, and whose livelihood is at equal to or greater risk than their artists’ during this year’s touring shutdown. 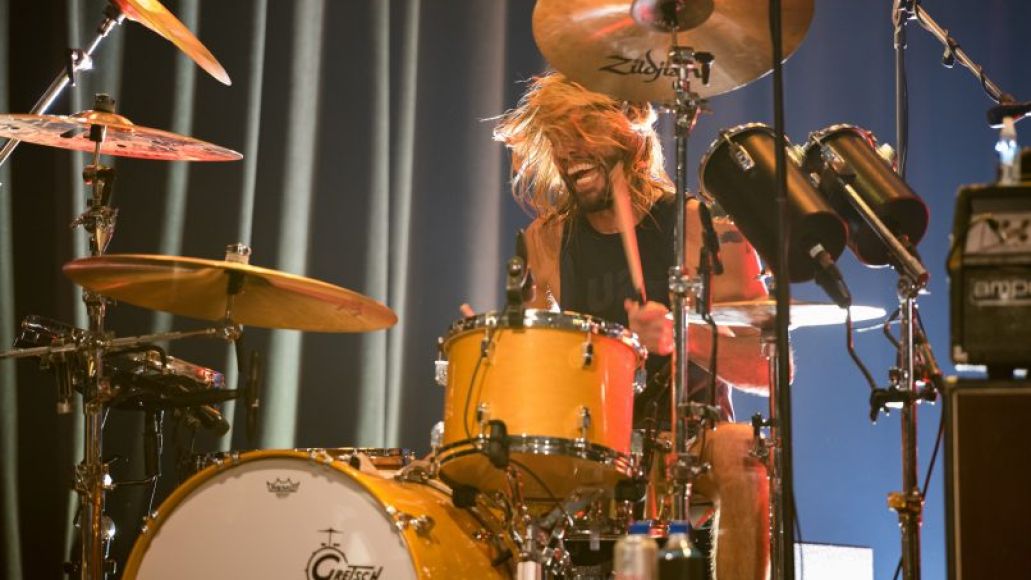 A Hit of the New Stuff: Last night’s show was billed, in part, as a celebration of the Foo Fighters’ new single, “Shame, Shame”, which made its debut during the band’s appearance on Saturday Night Live in late October. Consensus from the stream’s live chat indicated that the Roxy performance topped its predecessor. Darker and more restrained than most of the night’s stadium anthems, the new single opened up room in the night’s spotlight for guitarist Chris Shiflett (whose careful plucking packed the strength of an entire string section into a single acoustic guitar) and the band’s back-up singers (whose bluesy intonations included an appearance by Grohl’s own daughter, Violet).

Will the rest of Medicine at Midnight chart such a noir course? Well, Grohl also warned fans that they might hear a few unfamiliar things. That turned out to be teasers to three dramatic new songs off the upcoming album. The concert began with a preview of “Making a Fire” before the band launched into “All My Life”. They also ended “Learn to Fly” and “This Is a Call” with outros teasing “Holding Poison” and “No Son of Mine”, respectively.

Foo Fighters Debut “Shame Shame”, Dust Off “Times Like These” on SNL: Watch

The Setlist: Apart from “Shame, Shame”, the show’s relatively tight 90-minute runtime left little room for surprises. Instead, the Foo Fighters showed up with the kind of oops-all-hits comfort food required in the middle of a sick, worried autumn. Eleven tracks from the show’s 12-song setlist were released as singles, and half of the show came from just three albums: the band’s most recent (2017’s Concrete and Gold), best-loved (1997’s The Colour and the Shape), and most controversial (2002’s One by One). The biggest deep cut, relatively speaking, might’ve been “This Is a Call”, the band’s debut single played here in honor of the Foo Fighters’ 25th anniversary. While there were scattered calls in the live chat for a little more obscure material, the decision to lean heavily on sing-along-ready fare like “My Hero”, “Learn to Fly”, and “Everlong” was understandable; eight months into a live music shutdown, these big-tent rock anthems offer the kind of beltable release that everyone (band and fan alike) is looking for. 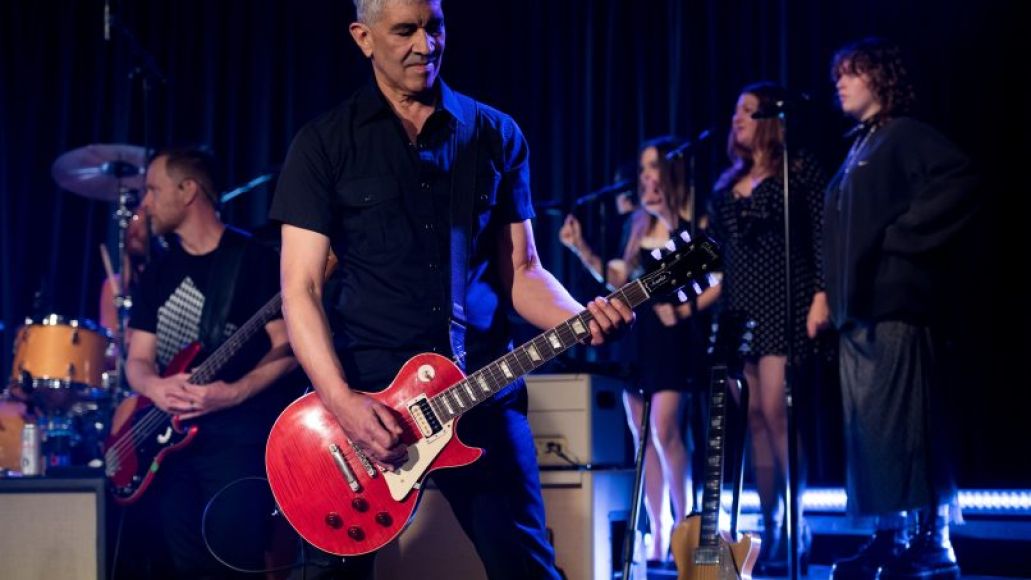 The Tech Side: As with all of our increasingly Zoom-based existence, last night’s show was also a test for the production team’s ability to recreate the vibe of an in-person concert. Despite the eerie cheer-free silence that dropped in at the end of each song and a vocal mic for Taylor Hawkins that could’ve used a boost of gain, the show felt like the genuine Foo Fighters article, with solid, unshowy camera work that gave viewers plenty of well-framed close-ups of Hawkins’ open-mouthed Animal drumming, Pat Smear’s zenned-out guitar work, and Grohl’s still-luscious locks (which, per the man himself, haven’t been cut since quarantine started). Perhaps the most impressive technical feat was also a personnel issue: stuck across a closed border due to the pandemic, the band’s monitor engineer, Ian Beveridge, worked remotely, viewing the proceedings from a large flat-screen setup just off camera. With that, the Foo Fighters singlehandedly expanded the definition of “essential worker.”

The Quotable Grohl: After some early-set tightness, the band’s energy loosened up; what began as a standard set quickly morphed into something more intimate and informal, with Grohl holding court with both his bandmates and those assembled at home. Amid the banter, there were some revealing tidbits (during lockdown, the Foos went six months without seeing one another), some trivia (Pat Smear’s first band the Germs was the only band cut from the battle of the bands scene in Cheech and Chong’s Up in Smoke), and some seemingly unintentional comedy (during band intros, Grohl appeared to accidentally skip Taylor Hawkins… before jokingly rectifying the situation by introducing himself instead). That increased comfort (as well as a couple whiskeys) helped the band transcend the barrier between stage and living room, something that even Grohl himself seemed to feel by the end.

“The only thing that makes this different than a Foo Fighters practice,” Grohl said, “is that there are cameras, lights, and we played more than three songs.” 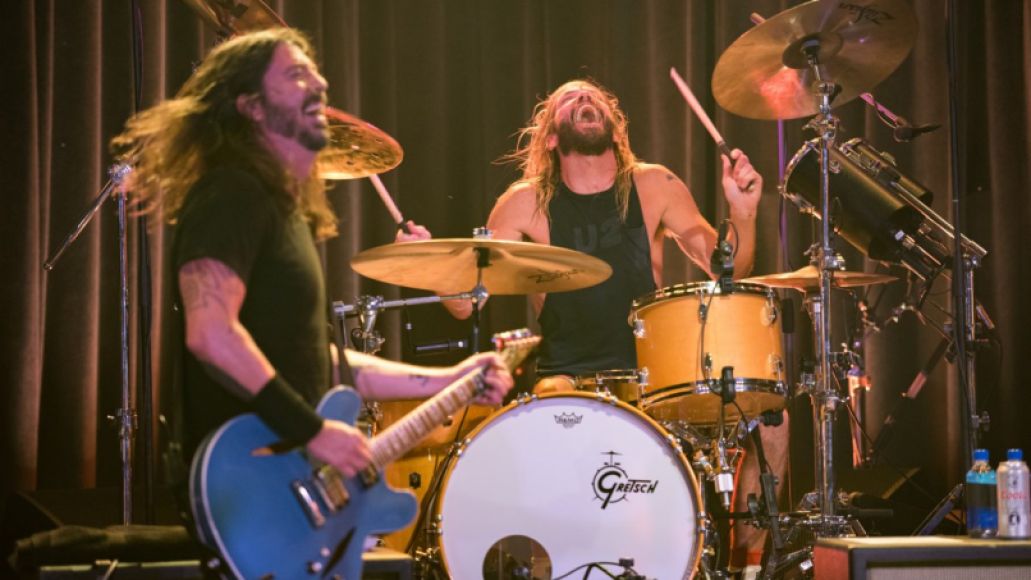 That One Song, Part One: This section in our live review is generally reserved for the most memorable song of a given concert. However, during the Foo Fighters’ set on Saturday night, two moments stood out, with the first coming during a late chorus in “My Hero,” when Dave addressed the strangeness of the situation. “This is usually the moment in the songs where everybody sings along. But that requires people to actually be here. So, if you hate your fucking neighbors and you hate your fucking roommates, I want everybody to sing ‘My Hero’ by yourself in front of your fuckin iPad,” Grohl instructed. “I know it seems embarrassing, but you can only imagine what it’s like being on the stage pretending like there’s people here. Let’s share a little bit of this awkward energy together. Because, someday? Someday, we’re gonna be doing this face to face, motherfuckers. You know that! It’s not long (I hope!) until we get to do this together. So, sing it loud for your fuckin’ neighbors right now.”

With that, Grohl’s mic went silent, and the band played a few bars for all of the fans assembled around the world. Those voices were quickly joined by those of the Foo Fighters’ road crew, who took their own turn with the chorus as the camera panned over a handful of masked faces who were louder than their number would suggest.

That One Song, Part 2: The second moment hit in the middle of the band’s performance of 2005 single “Best of You”. For as earnest and bighearted as that song is, it’s also easily dunked on; the repetitive chorus alone has been providing ammo for Foo Fighters skeptics since the song’s release. Whether it was just the pent-up energy from a year of canceled shows or a rallying desire to light up a world going increasingly dark, Saturday night’s performance found the band transcending all possible criticisms. Dynamic and emotive and appropriately jammy, the song offered the most nakedly cathartic moment of the night, a sentiment echoed by those in the chat.

“This song got me through a tough time in Iraq!!!!!” one viewer said. “This reminds me of how much I miss my person. She’s been gone for 5 years, but I feel her here with me tonight!!” said another. In a year that’s gotten the best of just about everybody, this song gave us 10 minutes of victory when we needed it most. 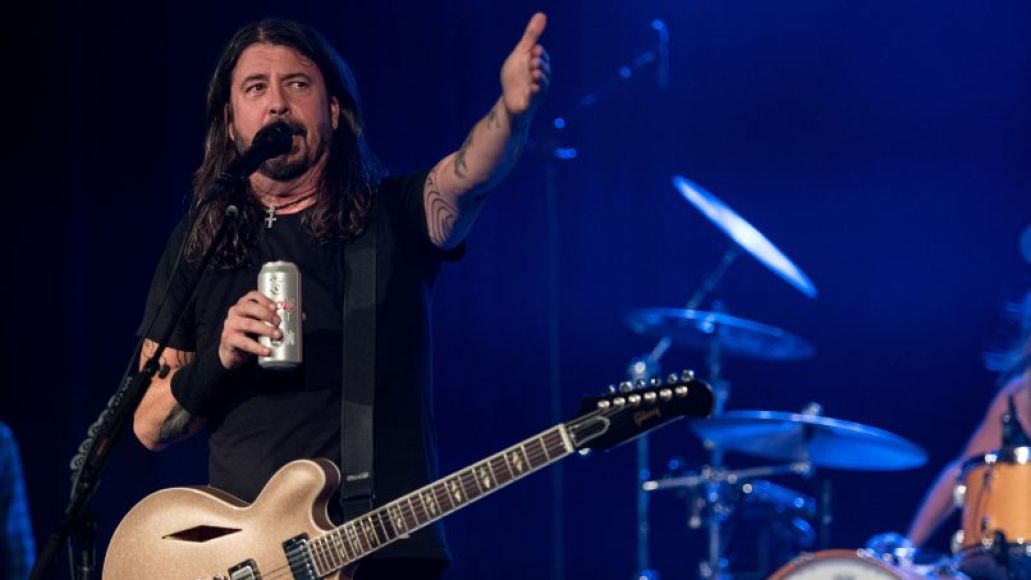 It wasn’t all teary confessionals in the chat on Saturday night. Below, here are a few of our other favorite comments worth preserving for posterity:

muzicfan: NO LINE AT THE BATHROOM

Paulien: Finally … a venue where you can smoke during the show… 😉

Uli Security Advice: Before stage diving, remember what floor you live on 🤣

emily: I just threw my bra at the TV 🙂

Offers: Get Dave some water! Don’t want him smelling of cat piss with a screwed-up liver. Long live the Foos!

Allison – Winnipeg: So … has anyone told them they need to do this weekly yet?

BostonFooFan: You guys all rock! Let’s go see a show when the world gets its shit together

Setlist:
All My Life (included Making a Fire teaser intro)
The Pretender
The Sky Is a Neighborhood
Times Like These
Shame Shame
My Hero
These Days
Learn to Fly” (included Holding Poison teaser outro)
This Is a Call (included No Son of Mine teaser outro)
Make It Right
Best of You
Everlong