The rivalry between erstwhile Van Halen singers David Lee Roth and Sammy Hagar has taken on a new art form … and a morbid one, at that. Diamond Dave has created a new piece of artwork that makes several references to the Red Rocker’s future passing and afterlife.

Roth’s art piece comes just a few days after Hagar said in an interview that he would have loved to take part in an all-inclusive Van Halen farewell tour featuring all three of the band’s singers (including Gary Cherone), despite a “not user friendly” DLR. The “kitchen-sink” tour, as Wolfgang Van Halen referred to it, was being planned by Eddie Van Halen before his passing in October.

While the timing of Roth’s artwork seems to be in direct response to Hagar’s harsh words, the subject matter apparently references quotes that Hagar made back in June. At the time, the Red Rocker said he was willing to “get sick and even die” to resume touring amidst the pandemic, if that meant getting the concert industry going again.

“We have to save the world and this country from this economic thing that’s going to kill more people in the long run,” said Hagar. “I would rather see everyone go back to work. If some of us have to sacrifice on that, OK. I will die for my children and my grandchildren to have a life anywhere close to the life that I had in this wonderful country.”

As part of an artwork series that features illustrations on the front page of a fictional newspaper called “The Daily Catastrophe”, Roth depicts a “red rocker” flying an airplane, with a number of headlines that reference Hagar’s above quotes. The headlines read as follows:

“Sam the Man Will Be Giving His Life for Rock and Roll, But Plans to Be Buried in His Recently Acquired Jet”

The above headlines also reference Hagar’s ridiculous wealth, after he sold most of his stake in his Cabo Wabo tequila company for $80 million. There’s also a shout-out to Hagar’s signature solo song, “I Can’t Drive 55”.

All of this pettiness between the two legendary singers comes less that two months since Eddie Van Halen passed away on October 6th after a long battle with cancer. While both vocalists have paid tribute to the fallen guitarist, it appears there’s no end to the pair’s long-running feud.

In the early 2000s, the two singers embarked on a co-headlining tour, but squabbled throughout. By the time it wrapped up, Hagar vowed to never tour with Roth again. 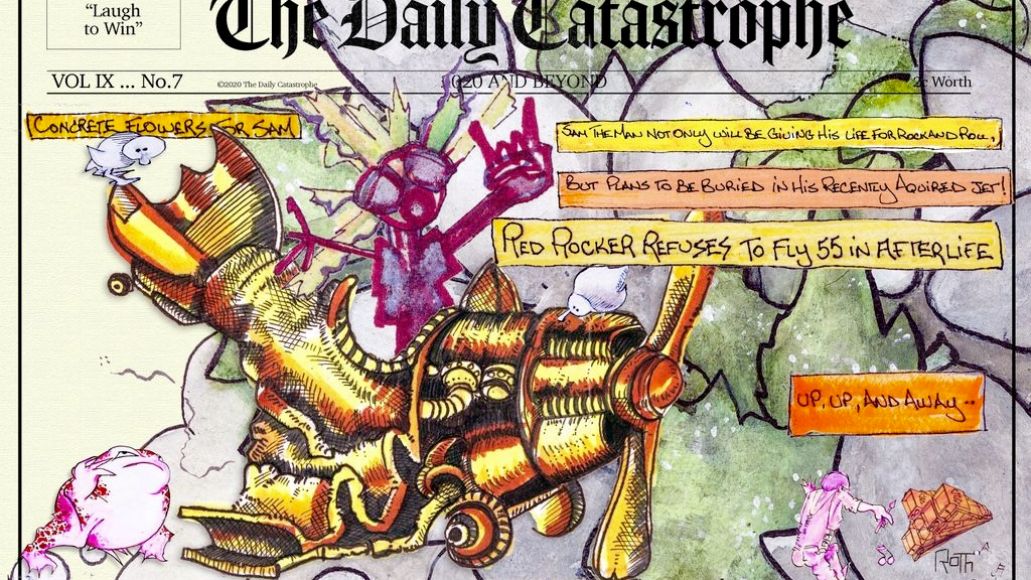