The Pitch: Mads Mikkelsen goes all-in for alcohol consumption in Thomas Vinterberg’s Another Round (Druk), arguably the most generous film about drinking in recent memory.

Sure, it’s a far-flung premise: Four academic buds decide to take a sip of Norwegian psychiatrist Finn Skårderud’s real-life hypothesis that human beings are born with a blood alcohol level that is 0.05 percent too low. In the US, a .08 is considered too drunk to drive. But .02, or a variable amount of alcohol based on individual physiology, can lead to lost focus and skill, he postulates. Skårderud’s big idea? When you’re a bit tipsy, you’re also on top. That’s to say you’re looser, more spontaneous, even inspired. Obviously he’s never binged, ignores addiction, and has likely never admitted to an excruciating hangover. Also, maybe now’s a good time to say that neither this film nor this review are necessarily pro-booze PSAs.

Anyway, the four – soccer coach Tommy (Thomas Bo Larsen), family man Nikolaj (Magnus Millang), single loner Peter (Lars Ranthie), and mid-life crisis exemplar Martin (Mikkelsen) – put Skårderud to the test. For science, of course. Or perhaps it’s malaise. The latter has certainly been Martin’s go-to of late, but frankly, they’re all in a rut. So the empirical question becomes: Why not? The gents stumble, staving off depression with all-day buzzing. Vodka in water canteens, hidden liquor bottles. But it’s not entirely a desperate thing; it’s a game uninterested in the probable worsts that could happen. Another Round poses a plausible-enough, “What’s the best that could happen?” What initially feels like a risky cry for attention becomes a cocktail odyssey, a nasty, funny, and achingly honest cheers to too many beers. 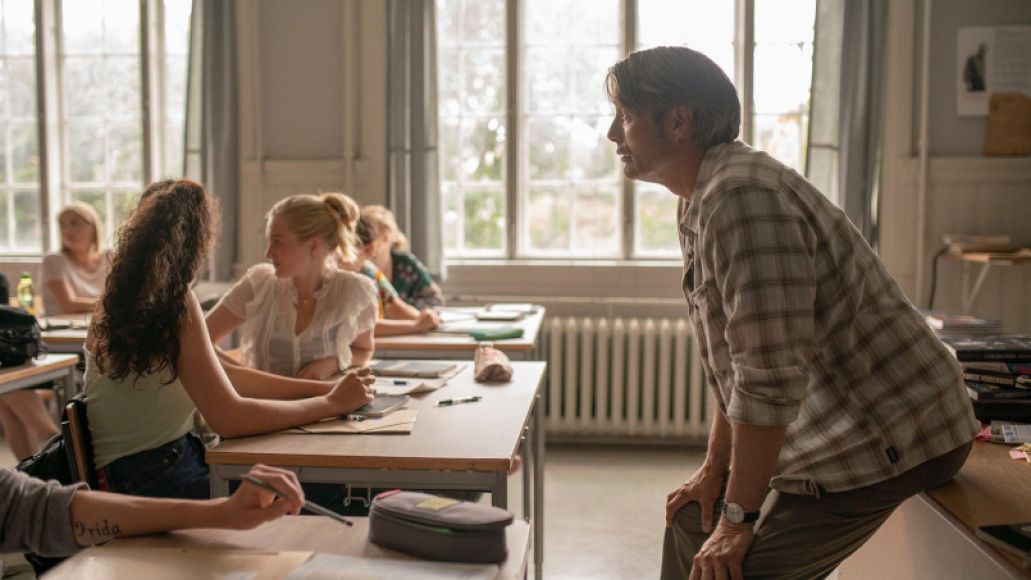 Another Round (Nordisk Film)

Three Sheets to the Win: This isn’t a Budweiser commercial. Vinterberg ironically cracks the film open with Danish teens drinking themselves into oblivion as pop music plays. They dance, they loiter, they puke. Hard cut to “DRUK (Another Round)”, to almost sobering ends. The film offers shot after shot of comic stuff, with a casually nervous energy and balance of light and dark comedy. It’s hard to explain, but in short, Another Round excels on its impressively nimble tone and laugh count.

Vinterberg gives off beautifully guilt-ridden images of Martin and his compatriots toasting to vodkas, wines, and other spirits. Should they be drinking around minors? Hell no. The movie is framed with both a sense of after-school danger and vodka ad ribaldry. It’s a perverse sense of curiosity – Will they get away with this? – in which Another Round imbibes, but always with a twist of eye-rolling self-awareness.

Try not scoffing at the men intellectualizing their pact before embracing it, as they delight in their exploits. Martin, while toasted and with his words chopped, lectures on the personal virtues of Hitler versus Churchill, and his students find him more entertaining than ever. Tommy, while slightly aggressive on vodka, actually manages to provoke his soccer team into a big win. On paper this sounds awful, but in the hands of the leads and Vinterberg’s loose hand, the film rides. All legal ramifications and worries subside for a time. These guys actually start getting away with this crap and start having a good time. It’s insane.

And sure, there are the full-on benders. Shirtless piano interludes, party boy stuff. We won’t say who but someone actually manages to boost a Jager machine from a crowded bar. It’s jolly broad comedy. But of course, one can only drink so long before the hangover. Without pouring the whole finale down the drain, Another Round does respect the danger of one too many. And simply put, the last round of the film is handled fairly, frankly, and with forgiveness.

What makes this stand out from a million “message” or mid-life crisis films? Vinterberg has a keen understanding of the complicated relationships people might have with drinking. He allows for the good time, even if it can’t be all the time. It almost feels transgressive in its way. The closest a film will ever get to being okay with binge drinking, perhaps. And the movie flows like fine wine, if you’ll pardon the expression. The old Simpsons classic about alcohol being the cause of and solution to all our problems is the maxim to remember. 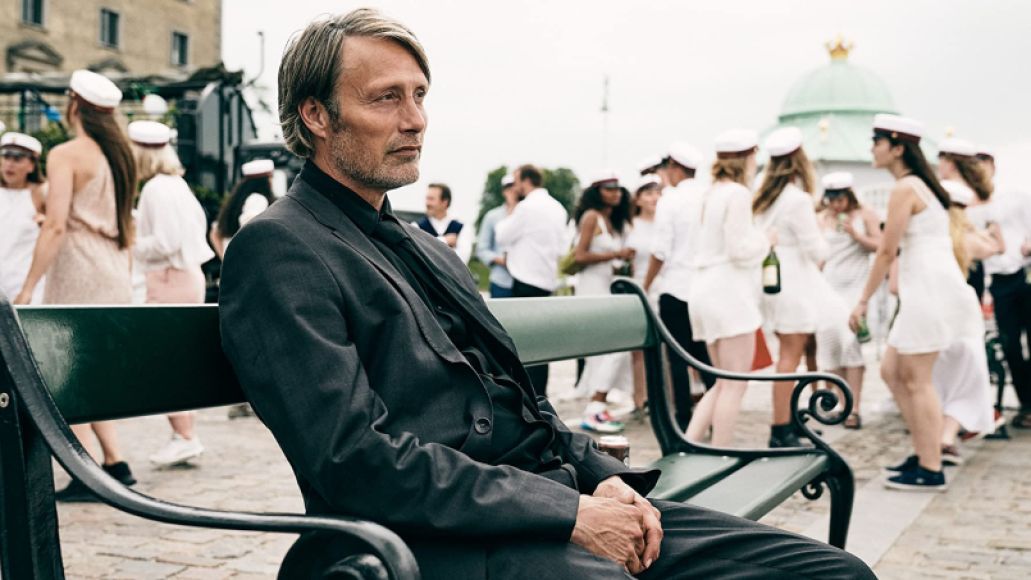 Another Round (Nordisk Film)

Pickeled Mikkelsen: There are mean drunks. Then there’s Mads Mikkelsen. That’s not to say he’s the exception to the rule here, but Mikkelsen embodies something unique. Jack Lemmon, Nicolas Cage, Paul Giammatti, Ray Milland have all dealt with drinking’s deadly grip onscreen. Mikkelsen is the first portrayal of this kind where you’d almost actually want to hang with the guy. Martin’s thoughtful, warm, a bit sad, and very fascinating. He’s not obvious, and that’s kind of a cool trait.

Martin is stiffening with age. He used to dance, he used to take camping trips with family, and then…life. The lithe man froze up into his 40s and 50s, becoming a dead-tired teacher. Martin’s so wound up, he’s going to start drinking to cut loose. Vinterberg and Mikkelsen seem to agree that this approach is preferable to so many mid-life crises, and two, Another Round is not wholly a work of despair. It’s fun, truly.

Mikkelsen is the driving force, working through a full arc of easy wit and whimsy. The handsome vet distinguishes the role from cliché. Mikkelsen knows when to evoke pity and a pained looked of stupidity when he’s wrong. He also has a poetic grace, a contemplative quality that shows a man actually in thought, not just acting like he’s in thought. And when Mads drinks down, he’s a bon vivant of the highest order. Mikkelsen’s the whole bar and then some, a showboat and a broken heart.

Verdict: In a word, Another Round is intoxicating. Vinterberg elevates what could have been a mope-fest with a magnificently defiant tone and a powerhouse performance from Mikkelsen. Another Round is a balanced and not-wholly-punitive take on one of our most socially acceptable addictions. Here’s a film that’s hilarious, preposterous, heart-breaking, and most importantly, self-aware. Cheers to that.

Where’s It Playing? Considering the fact that everything is fluid at present, there’s a tentative February 5 release date in the US. If you’d like a taste of what Mikkelsen offers sooner, it’s currently streaming on Premium Video On-Demand.

Mads Mikkelsen Is Intoxicating In Another Round: Review