The Premise: Emma Nolan (Jo Ellen Pellman) is just like any other girl her age. She wants to attend her high school’s prom with her date, and have the most magical night any teen could ask for. The problem? Emma is the only out and proud lesbian at her school, and the uber-conservative PTA isn’t having that. So, when her tiny Indiana town’s high school catches wind that she was planning on attending, they cancel the prom altogether. Complicating the situation further is the issue that Emma’s girlfriend and would-be prom date Alyssa (Ariana DeBose) is not only still in the closet, but the daughter of PTA president Mrs. Greene (Kerry Washington)..

Now a social pariah among her peers — not only because she’s gay, but also because she inadvertently got the prom canceled — Emma seems all out of options. That is, until a gaggle of self-obsessed Broadway stars catch wind of her predicament via social media, and come to her aide. The Broadway vets Barry (James Corden), Dee Dee (Meryl Streep), Angie (Nicole Kidman), and Trent (Andrew Rannells) intend on waltzing in, using their star power to get Emma’s prom back on track, and leaving with their disgraced reputations restored. But when they face resistance from Mrs. Greene, they realize rural Indiana isn’t as impressed by show tunes as New York is, and if they want to make a lasting change, they’ll need to rethink their approach.

Murphy Takes Broadway: The Prom is one of the few film endeavors of frequent Netflix collaborator/Glee creator Ryan Murphy, who can usually be found dreaming up television shows with snippy dialogue and grotesque violence. His past projects make him an interesting choice of director, to say the least, and he brings along quite a few of his Murphy-isms to this Broadway adaption — namely, the wink-wink, “did you understand that reference?” dialogue; the shoddy pacing; and the ensemble of characters who feel more like walking jumbles of cliches and one-liners than actual human beings.

Any stage show is an admittedly tricky translation to screen, especially when one is tasked with navigating how to work around a would-be intermission and fit frequently three-hour-long productions into a runtime that film audiences are willing to stick around for. But when you combine that already enviable task with a director notorious for his inability to properly structure a story, what results is a film far too long than it has any right to be. For starters, the central conflict of the film — that the school has banned the prom — is resolved before the one-hour mark.  Granted, this traditionally wouldn’t be a problem, but then again, films that go this route often propose a second, more significant problem. 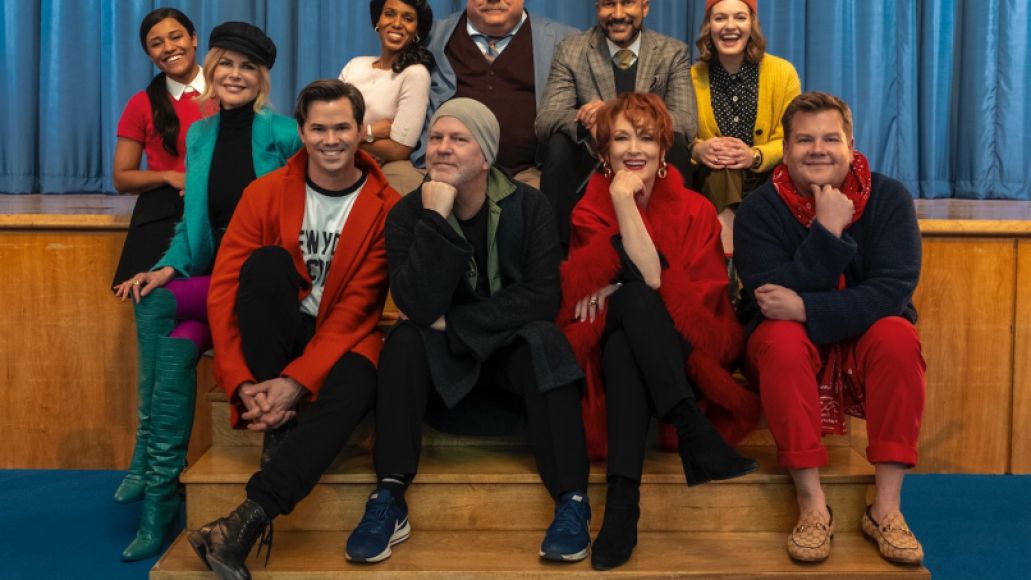 Admittedly, the film’s single attempt at a twist does work. As a workaround to banning Emma altogether, the school board and student council work together to hold a second, separate prom for the students at a nearby hotel — the “actual” prom — all while Emma is given her own “inclusive” prom where she is told to celebrate in solitude. It’s unspeakably cruel, just the type of petty thing that one might expect from such a cartoonishly homophobic town, and to Pellman’s credit, it’s heart-wrenching to watch Emma realize what’s going on.

But after that reveal has come and gone, we still have nearly an hour and a half left to go, with no solid goal or development to build towards. What follows is an hour and 15 minute’s worth of filler and meaningless fluff where each of the film’s top-billed stars gets their turn to prance around with a sparkly musical number, none of which bear any real relevance to the plot. Sure, the musical numbers are glitzy and pleasing to the eye with their saccharine costumes and acrobatics-filled choreography from Broadway legend Casey Nicholaw, but at a certain point, one starts to wonder: Where is all of this going?

The answer is nowhere — and The Prom takes a loooong time to get there. 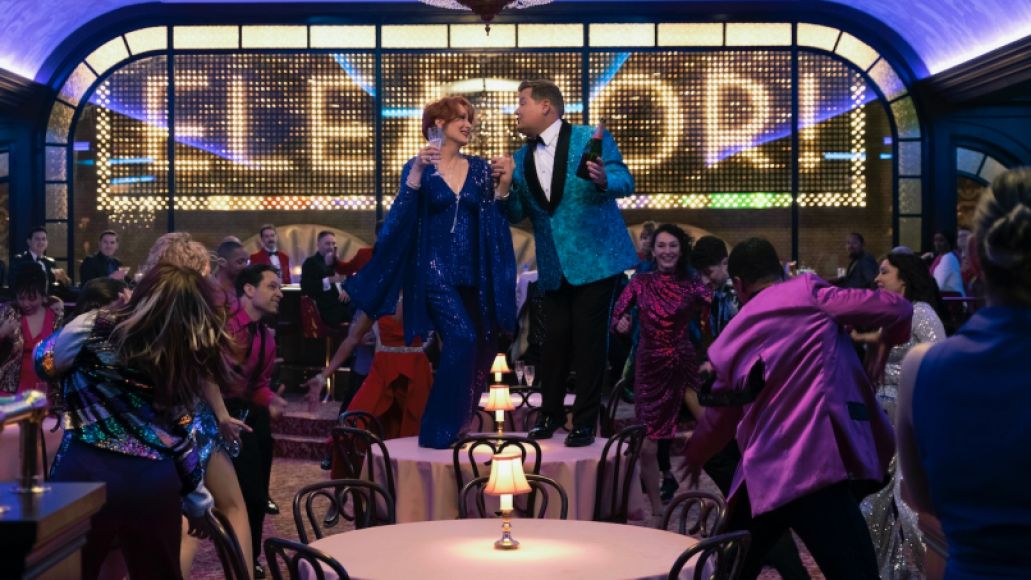 Much Ado About Corden – But admittedly, the average moviegoer isn’t tuning in to The Prom because they’re enraptured by the story. Unless you’re a Broadway buff, the real draw of the film is its lineup of A-list talent who, for the most part, do justice to their roles. Meryl Streep is solid. Her energy doesn’t quite match the enthusiasm or apparent joy that she carried in Mamma Mia, but her turn here is about on par with her role as the Witch in another Broadway adaption co-starring James Corden: Into the Woods. Her character Dee Dee is a very obvious Patti LuPone stand-in, who waltzes about the town as if she expects everyone to fall down and worship at her feet.

Funnily enough, the only person in Emma’s rural town that’s willing to give Dee Dee the attention she so desires is high school principal Mr. Hawkins, played by Keegan-Michael Key. Though on paper Key seems like the odd man out for this genre of film, he fits in remarkably well, giving one of the film’s more endearing performances, even with the bizarre romance he kindles with Streep’s character. Needless to say, I didn’t have “Keegan-Michael Key/Meryl Streep makeout session” on my 2020 bingo card.

Rounding out the gaggle of Broadway performers coming to Emma’s aide are Nicole Kidman and Andrew Rannells, both of whom are the most likable characters in the film, even though they could both be removed entirely with no change in the narrative whatsoever. Kidman, in particular, feels particularly useless, and although she attempts to fumble her way through a Fosse-number, something just doesn’t click, despite her inherent charm. To his credit, Rannells is very clearly the only cast member with actual Broadway chops, because he sings and dances circles around the rest of his co-stars. 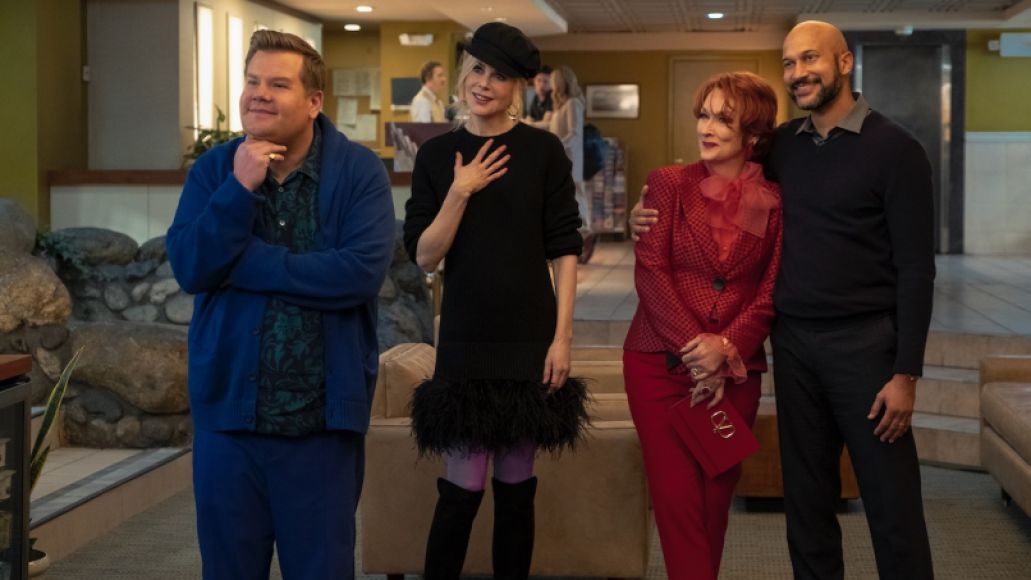 Kerry Washington is serviceable as Alyssa’s uptight mother (and president of the PTA) Mrs. Greene, although her role isn’t a very significant one. The only person with a more thankless role than Washington, though, is Kevin Chamberlain as Dee Dee’s publicist. It’s a shame to see a Broadway veteran quite literally standing by the wayside while Hollywood performers flounder their way through musical number after musical number.

The two young lovers at the center of it all are perhaps the film’s brightest stars. DeBose and Pellman have natural chemistry, and the kind of believable youthful joy and wonder that a film like The Prom needs to truly work. The pair of them are criminally underused, but I’ll touch on that later, because, first, we need to talk about James Corden…

Look, I have no personal vendetta against James Corden, but why Hollywood seems insistent on casting him in movie musical after movie musical is beyond me. His American accent is shoddy (at best), he can’t really dance, and his singing voice is nothing to write home about. What’s more, he can’t really act, either. Although he’s serviceable in small doses as the comedic sidekick in a film like Trolls, it feels particularly cruel to saddle him with the lead in a film like The Prom.

General flaws aside, Corden’s performance here is so embarrassingly cliched and hokey it almost feels insulting. There’s no reason that a straight actor shouldn’t be able to play a gay man, but Corden’s turn as flamboyant Broadway star Barry is so insincere that it actively lowers my enjoyment of the film whenever he’s onscreen which is, unfortunately, more than any other character. 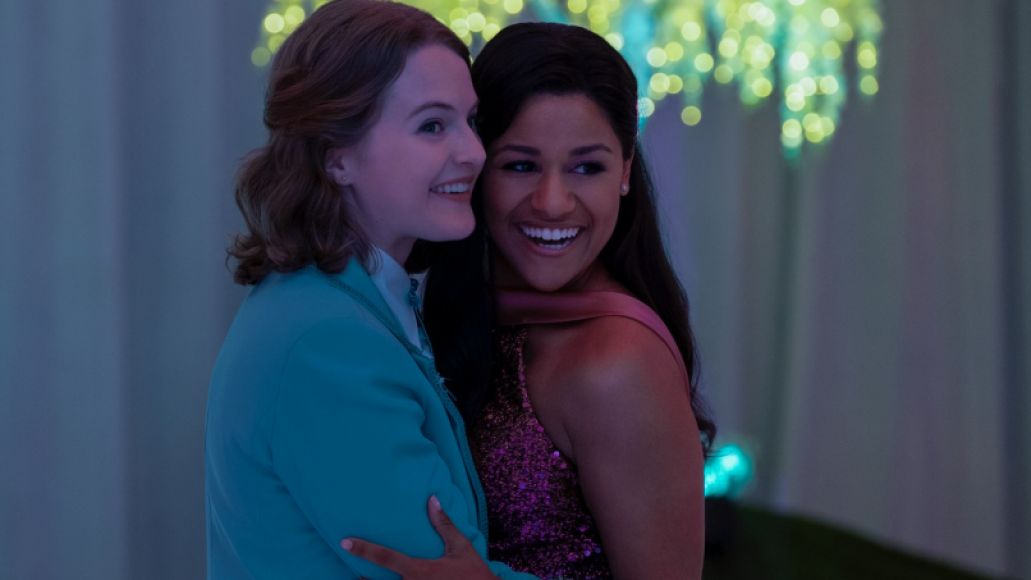 The Worst Kind of Meta: What makes Corden’s caricature worse, though, is that the film fails to take its own lesson to heart in how to portray Barry. It’s made incredibly clear from the get-go that Barry and his fellow Broadway compatriots are only coming to Emma’s aide because they believe it will salvage their tarnished reputations. The film (rightfully) paints this as wrong — that they shouldn’t be making it about themselves, and that they should instead be trying to uplift Emma and her story.

The Prom needs to take a page out of its own book, though, because the film makes the same mistake its characters do. Barry and Dee Dee are propped up as the protagonists with the juicy emotional arcs, all while Alyssa and Emma are thrown to the wayside. Their young love is only a step on Barry and Dee Dee’s paths to redemption.

It’s mind-boggling that a film can so crucially miss its own message, and even more disheartening to see young, queer stories shoved aside in favor of giving A-listers a chance to strut around in colorful costumes singing old Broadway standards. What’s frustrating is how easy it is to envision a version of The Prom in which Emma and Alyssa get to fulfill their arcs: Alyssa’s unwillingness to come out should be explored; Emma’s relationship with her family should be given time to shine.

Alas, that’s not the film we get, and The Prom suffers for it.

What’s Streaming on Netflix in December 2020

The Verdict: The Prom would be glitzy, high energy, and for the most part, harmless — if not for James Corden’s laughably cliched performance, and the film’s inability to figure out which narrative should take priority. It devastatingly underserves Alyssa and Emma where it should’ve highlighted them the most. So if you’re looking for a fun musical romp this Christmas, look elsewhere.

Where’s It Streaming? Head to your high school gym and stream The Prom when it hits Netflix on December 4th.

Netflix's The Prom Has a Ryan Murphy and James Corden Problem: Review