The Pitch: Alice Hughes (Meryl Streep) is an accomplished author with a chip on her shoulder and a looming deadline for her latest manuscript. Her new literary agent, Karen (Gemma Chan), is desperate to find out what it’s about — is it a sequel to her most commercially successful work? Or a follow-up to the lesser-known book she boasts as her personal masterpiece?

Under the auspices of a trip to the UK to accept a fictional literary award, Karen books the flight-averse Alice a seven-day trip on the Queen Mary 2 so she can spy on her and tease out some details about the new book. Also in tow are Alice’s formerly-close friends Susan (Dianne Wiest) and Roberta (Candace Bergen), along with her young nephew Tyler (Lucas Hedges), all of whom while away the days at sea with Alice, straining against old wounds and vibrating with frustrated purpose.

You Always/You Never: At times, it seems as if Steven Soderbergh‘s endless sense of experimentation stems from a desire to make things easier for himself than harder. Innovations aren’t challenges as much as shortcuts — ways to sidestep the normal difficulties of filmmaking to see if easier isn’t sometimes better. He’s used digital iPhone photography, pared-down crews, nonprofessional actors, and now, in Let Them All Talk, a largely dialogue-free script treatment (courtesy of author Deborah Eisenberg) that allowed the actors to improvise much of their own dialogue. As the title implies, the actors on screen aren’t reciting lines fed to them; they’re talking, and we’re a fly on the wall.

To an extent, one has to admire the chutzpah Soderbergh engages in here: just throw Meryl Streep and four other accomplished actors on the literal Queen Mary 2, have them make up their dialogue, film it on a wheelchair for a week, and voila, cinema. When Soderbergh brings his friends on a cruise and films a movie around the vacation they’re having, we call it a major work of film by a master of his craft; when Adam Sandler does it, we call it Jack & Jill.

Let Them All Talk (HBO Max)

The Fugue State: The results are inviting, if as meandering as a structureless week-long cruise might imply. Still, within the sleepy warmth of the lead performances and Thomas Newman‘s lounge-band scoring lies a cautionary tale about the pitfalls of mining your life (and the lives of those around you) for artistic material. Alice, Susan, and Roberta’s reunion is far from warm; the three haven’t spoken in years, particularly after Alice not-so-secretly aired their personal and professional dirty laundry in the pages of her novels. Now, they wonder why she invited them on this boat, whether to bury the hatchet or extract more stories from them.

Streep, for her part, is a tantalizing enigma, her Alice vacillating between disarming warmth and the cold calculation of Miranda Priestly on a good day. Contrast that with Bergen, who’s riotously droll and expressive as a down-on-her-luck lingerie saleswoman desperate to save money and find a rich man on the boat. Wiest is the more passive of the three friends, often acting as an intermediary proffering some much-needed perspective (“We have, in this time, lived most of our lives”).

In the periphery is Hedges, offering his second “failson hanging out with older relative on boat” movie this year after French Exit, a warmer and more well-adjusted role than he’s had in a while. He’s a winsome equalizer against the three older women he spends time with, spying on or for virtually every other character, depending on who’s asking for what. But he’s often wasted on a go-nowhere romantic subplot with Chan — herself stuck in the thankless role of plot facilitator. The roles are underwritten by design, but alas to a fault; it’s a credit to the masterful ease with which these performers maneuver on-screen that the dynamics work at all. 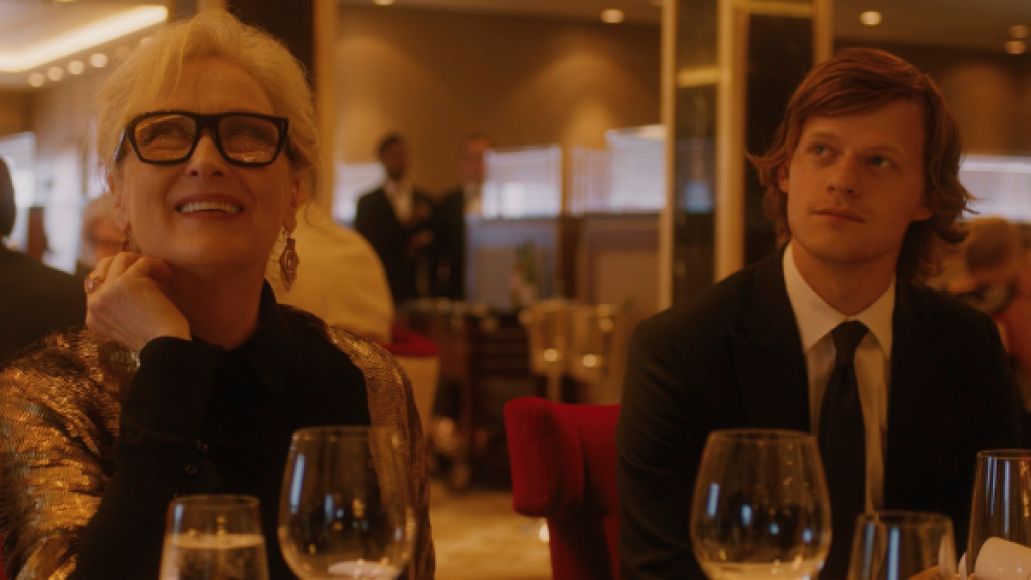 Let Them All Talk (HBO Max)

The Soft Landing: Amid the film’s leisurely pace hides some intriguing observations on the way we value art. Soderbergh, a prolific and self-made filmmaker, might have a lot to admire about Kelvin Kranz (Dan Algrant), the Dean Koontz-like “one-man publishing machine” who also makes his way onto the boat. Alice carries no small amount of animus towards him for his prolific nature and commercial success, and yet eyes him with the curious fascination that comes with artistic frustration. She’s a perfectionist, someone who can’t create unless she gets it exactly right; Soderbergh seemingly wonders why she can’t just shut up and put something on paper.

Of course, a surprise twist ending in the closing 20 minutes puts many of Alice’s idiosyncrasies into focus, a surprising moment of clarity after the hour and a half we’ve just spent vibing with some old friends on a boat. Suddenly, an aimless movie about old friends reunited becomes a testament to our human frailties and sense of rigidity. Hedges’ Tyler spends the film fascinated by Alice and her friends, people who lived their lives in a time before smartphones and false selves. But as he learns, people calcify who they are earlier than you might think, and our bad habits tend to stay with us till the end.

Netflix’s The Prom Has a Ryan Murphy and James Corden Problem: Review

The Verdict: Let Them All Talk is a bit too lackadaisical to rank as one of Steven Soderbergh’s finer works. But compared to the two films he put out in 2019, it’s thankfully a bit more on the High Flying Bird end of the spectrum than The Laundromat. There’s a mercenery, let-see-what-we-can-get-away-with nature to the proceedings, which can be exciting. But at the end of the day, it’s a movie made on the fly, and for better or worse, you can tell.

Meryl Streep Speaks For Herself in Steven Soderbergh's Let Them All Talk: Review