As our Annual Report continues, we’ll be taking several looks at how live music changed in a year where most of the world was in lockdown. Today, we share our conversation with legendary metal drummer Dave Lombardo about his incredible year playing with a reunited Mr. Bungle, his life during the pandemic, and the future of concerts.

In a year in which the touring industry came to a standstill, a reunited Mr. Bungle were able to make their mark on the concert stage, both in person and online. The band played their first shows in 20 years just before the pandemic began, completing a brief jaunt of a handful of cities in February. And on Halloween, they treated fans to one of the more memorable livestream concerts of the year.

Not only did the reunion mark the coming together of original Bungle members Mike Patton, Trey Spruance, and Trevor Dunn, but also the addition of thrash masters Dave Lombardo (Slayer, Misfits, Suicidal Tendencies, Dead Cross) and Scott Ian (Anthrax). The two metal legends not only performed with Mr. Bungle, but were also on board to masterfully re-record the band’s 1986 demo, The Raging Wrath of the Easter Bunny.

We attended Mr. Bungle’s show in Brooklyn in February, and it was an all-out thrash and hardcore assault. The band eschewed its experimental rock of the ’90s, instead embracing their early roots. Not only did they perform songs from The Raging Wrath of the Easter Bunny, but also covers of tunes by Corrosion of Conformity, Circle Jerks, Cro-Mags, and others.

More recently, we had the pleasure of viewing the band’s Halloween livestream show, “The Night They Came Home”, a highly entertaining show that added a comedy element to the thrashing concert. Amusing cameos from such music luminaries as Henry Rollins, Josh Homme, Buzz Osborne, and more added to the unforgettable experience.

Dave Lombardo has been long considered one of metal’s greatest drummers, as a founding member of Slayer, and current member of Misfits, Dead Cross, Suicidal Tendencies, and, of course, Mr. Bungle. He recently caught up with us to discuss the genesis of the Mr. Bungle reunion and the state of the concert industry. The veteran stickman also opened up about what it’s like for a lifelong touring musician to suddenly have everything come to a standstill.

Read our conversation with Dave Lombardo below, and pick up Mr. Bungle’s The Raging Wrath of the Easter Bunny Demo album here.

On the genesis of Mr. Bungle reuniting and adding Dave Lombardo and Scott Ian to the lineup

It started during the Dead Cross tour. I had asked Patton if he would be interested in joining this hardcore band called Dead Cross with a couple other musicians that he knew of, and that they played in a band called Retox, and [Patton’s] Ipecac Recordings released a couple of their albums. So, I approached Patton at the time, and he agreed to the gig. Well, we started touring and we ended up in Brooklyn and the opening band was Secret Chiefs, which is Trey Spruance’s band. And Trevor Dunn was there, he’s a resident of Brooklyn and he came out to the show, and we’re all in this backstage area. Trevor, I believe, said, just under his breath, “Is this the new incarnation of Mr. Bungle?” And Patton chuckled, and I believe Trey chuckled, and that stuck in my head. That would be so awesome if we put together Bungle and recreate that demo.

So I think the idea was just floating around in their minds for a while. And I believe it might have been February 2018, I had a crazy idea, after hearing those comments from Patton, Trey, and Trevor, amongst themselves, I kind of remembered that and kept it in the back of my mind. And around that time I hit up Trey and I mentioned to him, “Hey man, let’s put together some of those Bungle tracks, and surprise Patton with it. He was keen on the idea. He was really excited: “All right, that’d be awesome. Let’s do it.” So that’s kind of what put the gears in motion.

And then I believe I received kind of a cryptic message from Patton. I didn’t understand what he was asking, but it had to do with, “Have you been talking to Trevor or Trey?” And so I told him what I suggested, and I don’t remember his reaction, but then Dead Cross was on tour in Europe, and Patton surprised me by saying that Trey and Trevor had sent Patton lengthy letter saying that they’d be really interested in putting Mr. Bungle together again, and possibly re-recording The Raging Wrath of the Easter Bunny. And I was like, “Oh shit, here we go!” So, it worked.

On playing the Mr. Bungle reunion shows before hitting the recording studio

The idea of re-recording the demo was at the forefront of my mind, and then as we were demo-ing everything up, some shows started coming together and we felt that it would be good for us to possibly go out and play the songs live to get them under our belt, nice and tight, and then record them soon after. We did our last show on February 14th, I think in San Francisco, traveled on the 15th, and then planned to commence recording on the 16th, but there was a bit of a delay. Both Patton and I, when we were in Brooklyn, in February, we believe we caught a form of COVID, and so we had to delay recording one day. I told the guys I needed one more day to recover, and Patton as well, needed an extra day. I had a horrible fever on the airplane back from Brooklyn. And then we played our last show in San Francisco and then we started recording on the 17th. So yeah, the idea of recording the songs was first and then the shows, but somehow we chose to do some shows first. 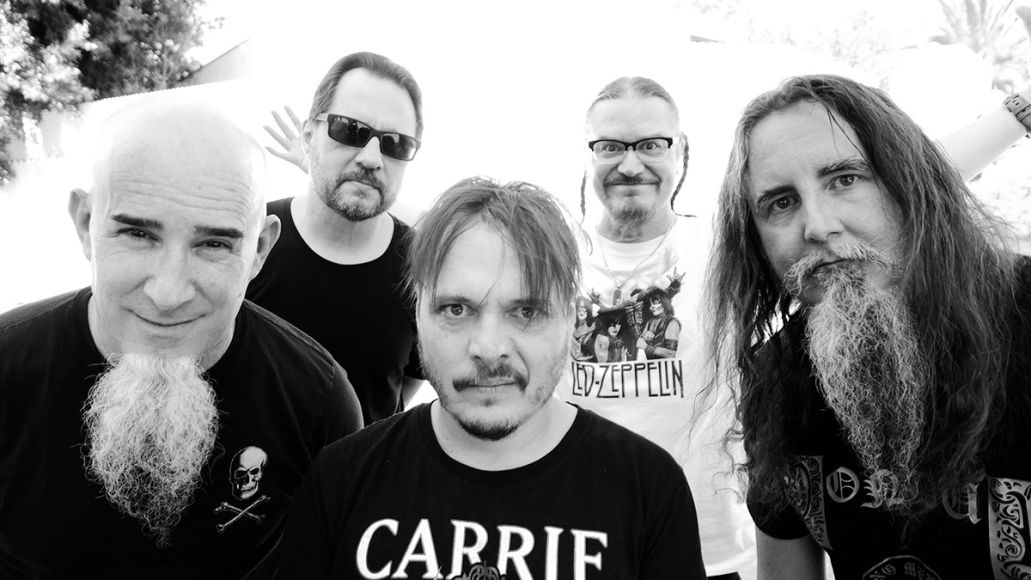 On his approach to playing drums with established acts like Mr. Bungle, Suicidal Tendencies, and Misfits

I’m trying to pay respect to the song, keeping in mind the ideas that were implemented at that time that [they were first recorded]. Where my creativity is allowed is when, for example, I write something new for Dead Cross, then I can do whatever I want. But with the Misfits, I tried to make sure that I kept things respectful to the original songs. I’m not gonna sit there and start adding crazy-ass double bass to a song that double bass, at that time, didn’t really exist. That’s not a place for me to do. I’m there to keep time, make sure that I’m solid, make sure that the band transitions from one section to another seamlessly, and to learn the songs on call. Like whenever Danzig just says, “Hey, this song” — bam, I’m ready to go. So my memory has to be on point.

For the Bungle music, I was allowed to add my drum rolls, but their structure was kept [in tact], and then I just added my style to it and elaborated on some parts. But for the most, I just kept things how they originally were.

On whether the current Mr. Bungle lineup plans to write and record new songs

I don’t think anybody’s suggested that yet. We’re still wallowing in this amazing bungle whirlpool, and enjoying it. I don’t think anybody’s thought of anything outside of what we’ve just recorded. Because of the complexity of the songs, I think we’re going to be performing these for a while. We just need to play live, and as soon as this pandemic resolves, I think we’re going to be sitting on this album for a bit. I mean, you never know, these guys might come up and say, “Hey, let’s record this song or a couple of songs and release them as singles”. You never know, but that thought hasn’t come up.

It’s a good idea. It’s a fantastic attempt to play our instruments, and give people some form of entertainment. We realize that musicians and music and movies are not as important as people on the front line, doctors and the like. Those jobs are definitely more important than ours, but we’ll probably keep trying and doing our best and finding ways to perform live and entertain people.

I’ve been playing for 40 years. Since I was 15 years old, I had drum sticks in my hand, and was searching for musicians to jam with in my neighborhood. So, as soon as I was 18 and out of high school, graduated, which was one of the things my mom said, “Just graduate from high school. I know you want to go on the road.” And I had an opportunity to go on the road when I was 17. She just said, “Just do me that favor, just finish your education in high school and then go.” So I have literally been on the road for 35 to 40 years. It’s been tough, not only on a mental level, but also tough physically.

I went into this pandemic like, “We’re gonna cook, we’re gonna drink, and it’s just going to be a straight-up party all the way through.” And all of a sudden it hit me. One, it isn’t healthy because I wasn’t active. And, two, what am I doing to myself? This is not right. So, I immediately pulled back on the gluttony and everything, and I just started focusing on health. What I did notice is that my mind wouldn’t shut down. I would feel like I had something to go to. I felt like I always had somewhere to be. There was this moment, now it’s subsided, but in the beginning I couldn’t understand where this anxiety was coming from.

Usually, in anxiety, like what I was feeling would come from, “Oh, I got to catch a plane” or “I have to be onstage” or “I’m running late” or “I might have to delay the show for a couple of minutes.” But [with the pandemic] it was happening to me for no reason. And I just couldn’t understand it. So what it came down to was realizing that I had been on the go for many years and life just stopped. Not only was I gaining weight, I noticed that my muscles were feeling different. I was feeling weak as time was going on.

And so I had to counter those feelings with playing drums, doing more cardio, walking, lifting weights, just focusing on myself and my body, because if I would have let that go, I don’t think it would be easy for me to rebound, especially at my age. You have to be very careful and conscious. So I immediately made changes in my diet and physical activity. So now, I’ve lost the weight that I had gained plus more. I love music too much to ever neglect my health over gluttony.

On what it will take for concerts to resume in earnest

It won’t be the same unless there’s [widespread distribution of the] vaccine. Sweaty bodies, people screaming out, there’s some f**ktard there without a mask just screaming his head off and infecting everybody. I don’t see it happening like it used to unless the vaccine [is widespread]. We gotta wait for science to catch up and the world to heal before we keep doing what we love to do. That’s that’s the bottom line.

Mr. Bungle's Dave Lombardo on the Pandemic: "I Had Been on the Go for Many Years and Life Just Stopped"