Our Annual Report continues today with the announcement of Steven Yeun as our Performance of the Year. Stay tuned for more awards, lists, and articles in the days and weeks to come about the best music, film, and TV of the year. If you’ve missed any part of our Annual Report, you can check out all the coverage here.

Two things you need to know about Steven Yeun: He calls comparisons “comps”, and he has a better understanding of who he is as an actor and cultural figure than many other stars his age. Of course, it helps that he’s taken the long road to stardom, breaking out in a big way as zombie apocalypse survivor Glenn for six years on The Walking Dead, before moving on to roles in films by some of our most idiosyncratic, interesting filmmakers working today: Bong Joon-ho (Okja), Boots Riley (Sorry to Bother You), and Lee Chang-dong (Burning), to name a few.

His latest, A24’s soul-stirring family drama Minari, feels like a turning point of sorts, both in the gripping complexity of his performance and the film culture that’s finally taken due notice of him. In Lee Isaac Chung’s thoughtful melodrama, set in rural Arkansas in the 1980s, Yeun plays Jacob Yi, the ambitious patriarch to a young family who’s emigrated to the United States to build a better life. They’re farmers and chicken sexers, moving from place to place to chase the American Dream.

David’s latest endeavor brings him to a ramshackle elevated trailer in the middle of a barren field, which he’s convinced will be the site of a new farm for Korean vegetables he can use to build a life for himself and his family. But for the rest of the family, it could be the thing that tears them all apart.

It’s a beautiful turn, Yeun layering Jacob’s quixotic journey with introspection, wounded masculinity, and that lingering tension between being a family man and finding one’s purpose. It’s also a performance that’s leading to a lot of Oscar buzz surrounding Yeun, which (if it came true) would make him the first Asian-American actor nominated for Best Actor. But his journey with Minari is also colored by an intense clarity about the unique space he occupies in both American and Korean film culture. It’s clear he desires, above all else, to explore his capabilities and potential as an actor, and to chase the opportunities that gave him that chance.

Filmmaker of the Year Steve McQueen: “All We Have Is Our Morality and Our Sense of Justice”

Yeun sat down with Consequence of Sound to talk about not just Minari and how he came to be involved, but the film’s place in his already multi-faceted career. Together, we discuss the ways Jacob feels like James Dean and Willy Loman, how the death and disease of 2020 has altered his relationship to the film, and how he feels about the labels — sex symbol, potential Oscar nominee — people place on him.

On Planting the Seeds of Minari

What’s the story of you coming to Minari – not just starring in it, but also executive producing it?

My agent, Christina Chao, came up to me one day and was like, “Hey, we represent your cousin.” I was like, “What? Who’s my cousin?” She said, “Isaac Chung.” I had no idea who she was talking about. And then it hit me: My wife’s cousin Isaac Chung.

I’d only met Isaac a handful of times prior, maybe at family weddings. The first time I knew of him was when my wife and I first started dating in Chicago, and she took me to Piper’s Alley to watch his first film, Munyurangabo, and it was so wonderful. But we never really connected or talked about working together or anything like that.

But Christina asked me to take a look at the script, and I was so blown away by its honesty and its unwavering point of view. It wasn’t trying to explain itself; it was just true to the experience. Whenever it’s something like that, I get excited. I said to myself, “This is incredible, I’ve gotta do it.”

I had a lot of hesitations because I knew I was perhaps touching something personal and dear to a lot of people. I was wriggling and writhing a bit. But speaking to Isaac really made me feel at ease that we were approaching something really wonderful.

I understand that it’s semi-autobiographical for Chung; what kind of responsibility did you feel, especially in conversations with him, essentially playing a sort of avatar for his own father.

What was really great was that he never placed that burden on me. He never said that this was to specifically represent his father or anything. I think the beauty of the script and his approach was that I was just supposed to service this character of Jacob. He also opened him up, knowing that I also had similar experiences, that I could also resonate with the themes and ideas. Just a Korean man of that era, looking at my own father, and the immigrant narrative.

Isaac and I connected in a lot of places — I think we really see a lot of things the same. 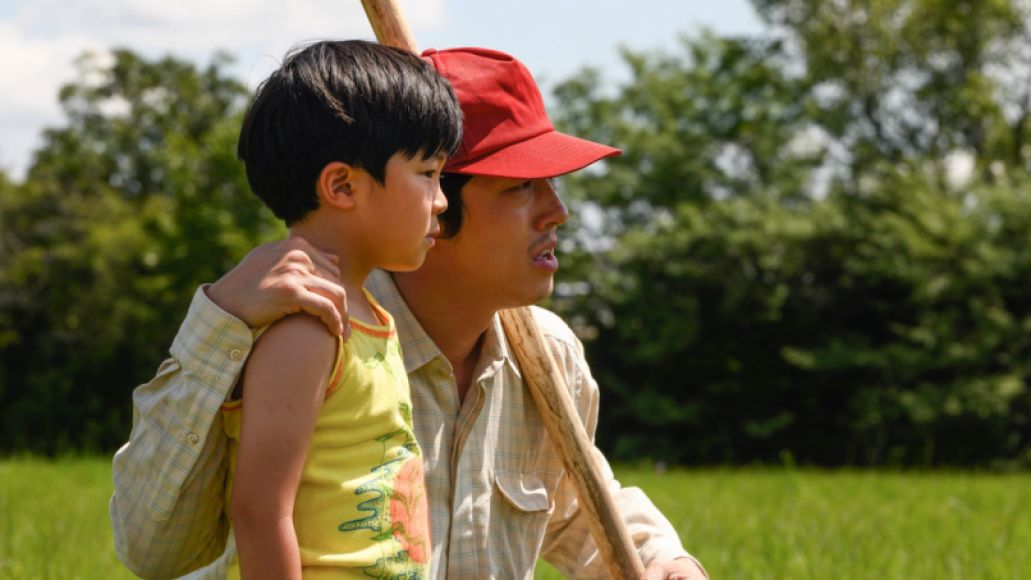 What resonated with you about Jacob as a man? Obviously, there’s a lot about the American immigrant experience in there, but there’s something of Willy Loman in him too. There’s that sense of idealism against all odds, to the point of delusion, that his plan for his family will work.

That’s a great comp — he’s caught in the process of society, I guess, of what a family must do and what each person must service and what role they must play in order for a quote-unquote family to work in this life.

Another comp I was holding dear in trying to understand Jacob was James Dean, you know? From an ideological standpoint, he was someone that I felt was trapped in the gap of things. He was able to see a lot of things for what they were but was unable to communicate them because the larger world outside didn’t understand what he was talking about. That frustration, that desire to be seen and to make himself was something that I think Jacob definitely carries.

When building Jacob’s story, what I deeply resonated with, and I think a lot of immigrant men (and specifically Korean men at the time) connected with was trying to get free of the system that you’re from. Korean culture, and Eastern culture as a whole, has within it a collective structure that sometimes determines who you are and what you can be. That exists everywhere, but maybe in Korean society that’s a bit more on the surface.

So it was fun to build the idea that Jacob, much like our fathers were people trying to break free of it and realize a dream for themselves. Then, as they come to do that, they find other things that are trying to ensnare them more and trap them in their own system.

Jacob’s a pretty crazy character, if you think about it; for him to leave his home country and then land in California, and then still feel the cage of the Korean system still upon him. So he moves deeper into a place where no one can really be with him. He’s a man trying to find himself, I think, and on a larger front, like Jacob in the Bible, wrestling with God. Try to deeply control life. 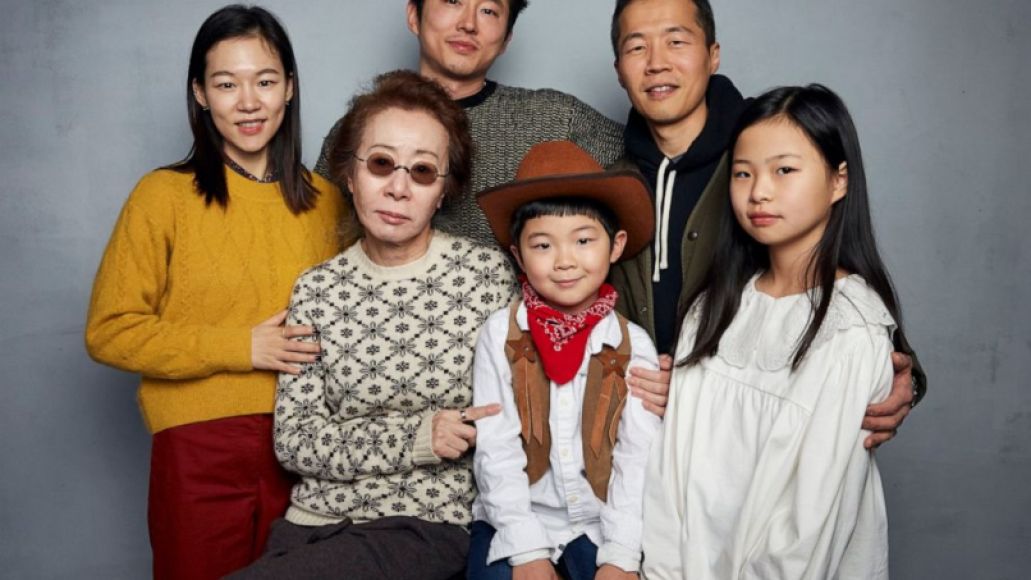 There’s that responsibility to create that sense of purpose, as well. I remember a scene early in the film where he explains to young David about chicken sexing, and about how disposable male chicks are burned because they have no purpose. So he needs to become useful.

Yes, and I think that’s kind of an indoctrination in terms of his understanding of his worth and existence. That it needs to be predicated on a function, which is something that we all hold. But perhaps the journey that Jacob goes on is more about understanding that he’s more than his role and that his family is also more than their intrinsic roles. They’re deeply connected together.

Speaking of the family, I’d love to hear more about how you engaged with all the wonderful cast members around you — Alan Kim, Han Ye-ri, Youn Yuh-jung. Was there a sense of building a family while you were filming?

We didn’t actually have much time to shoot this. We had less than a month. And people are coming in from Korea, from all over the US, just to meet in Tulsa on a tiny little set. What was really wonderful is Isaac’s incredibly wise, talented direction — he cast a wonderful family, he cast amazing actors all around that were willing to really submit to this story and come together as a unit.

Isaac says that he sees the protagonist of the film as the entire family. With that in mind, he cast actors who were not just so talented in their own right, but are also deeply humble human beings who came in service of the story. So when we did come together, it felt really natural.

Ye-ri and I spoke a little bit about our dynamic, and we expressed to each other our viewpoints about what we thought our relationship was. Even working through that conversation, you realize that we don’t totally see eye to eye, which is so perfect for this relationship. We all just leaned into it. Everyone was allowed to hold their own space, their own place in the narrative.

And the kids, you know? Kids keep you honest, I think. Alan and Noel are so pure that, when you’re acting alongside them, and if you’re false they’ll become false as well because they’re reacting to you. Or actually, come to think of it, they’ll become just as true. They’ll tell you that you’re being false.

Read ahead to hear his thoughts on current Oscars buzz…

Minari's Steven Yeun on His Performance of the Year: "I Just Want to Keep Playing My Part"