A couple of months ago, Guns N’ Roses announced a series of “Not in This Lifetime” pinball machines, modeled after the band’s mega-successful reunion tour of the same name. The arcade games were co-designed by Slash, who caught up with us to discuss all things pinball and his involvement in the creation of the machines.

The “Not in This Lifetime” machines are manufactured by Jersey Jack Pinball, and are available in three editions — Standard, Limited, and Collectors — each with a different design on its body. The machines feature a 21-song soundtrack that closely mirrors the setlists that Guns N’ Roses played on their “Not in This Lifetime” tour, which saw the return of classic members Slash and Duff McKagan.

As we learned from Slash while speaking with him about the machines, his love of pinball didn’t come during his teenage years, but later on, when he was already a world famous guitarist in Guns N’ Roses. He has since amassed an impressive collection of machines at home, and he played a major part in the design of the “Not in This Lifetime” pinball games.

Read our interview with Slash about the “Not in This Lifetime” pinball games and check out photos of Slash at the Jersey Jack Pinball factory, plus a promo video for the machines and the full tracklist, below. The Collectors edition is already sold out, but the Standard and Limited editions are still available here.

The funny thing is I never played pinball [as a teenager]. I was in high school when Asteroids and Missile Command and Galaxian and all those new video games first came out. I sort of played those on occasion ’cause there was an arcade across the street from Fairfax High, which is where I spent my last years of high school. I always loved arcades. I loved pinball from an aesthetic point of view, but I just never played games really. I was more into guitar and that was it.

I didn’t really get into pinball until the very early ’90s, suddenly I got turned onto pinball. The first game that I remember getting was “The Addams Family”. And so it was around that time, which I think was like 1993, and then it was the Data East “Jurassic Park”, and I just got so into it. I went to the company Data East and we ended up doing a Guns N’ Roses pinball machine back in 1994. So, I’ve just been obsessed with it ever since. Now I have like 17 pinball machines that I play all the time.

I can’t say that they did. I always loved the Rolling Stones, the KISS machine, there was even a Ted Nugent machine back then. One of the things that has always drawn me to pinball are the themes, that really sort of defines the aesthetics for me of a pinball machine. And then hopefully the game play is great. I always thought that was a turn on, that there was rock ‘n’ roll pinball machines, but when I got into doing the Guns machine with Data East back in ’94, I totally was going after my own idea and didn’t use any of those machines as inspiration. I don’t think I had even played them at that point. 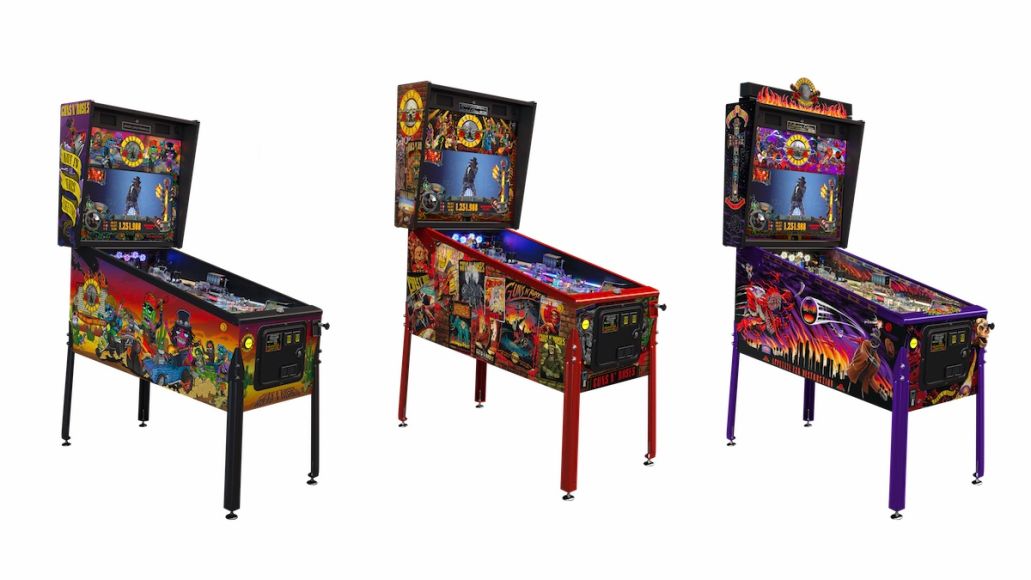 I wanted to use Jersey Jack just because they are the most original and most boutique-y of the pinball companies that are around right now. And they have that sort of hands-on, homemade, love-and-care kind of machines, and really original ideas and a lot of creative depth. And they’re just amazing. And so when I had this idea that I wanted to do a Guns machine and have it represent the “Not in This Lifetime” tour, I thought it’d be really great to do that, since [the band] had gotten back together and so on. So, I called up Jersey Jack and said, “I want to do this ‘Not in This Lifetime’ pinball machine, would you guys be into it?”

And I wanted to make it like an immersive concert experience and really bring in a bunch of the elements from our actual shows. And [the Jersey Jack rep] says, “Well, let me get back to you on that.” And a month later or something, he called me up and there was a green light. So he hooked me up with Eric Meunier, who’s the official sort of game designer or head of the team. And I started going over a lot of the different ideas that I had, about having concert lighting, and also to bring some of the content from our live videos that we have behind the stage, and to just have all these other different elements in it. And also to have all the songs — I think it’s got 21 songs in it.

So [I wanted] to have all that and to just make it as close to one of these shows and have it represent an entire tour. So, I went to them with all this stuff and Eric was just f**kin’ on it. One of the most amazing people I’ve ever worked with in any capacity. And so he put together a great team of programmers and artists and technicians, and just went to town in really putting their heart and soul into making this game great. And they did — it was way beyond my expectations.

Promo Video for “Not in This Lifetime” GN’R Pinball Machines: 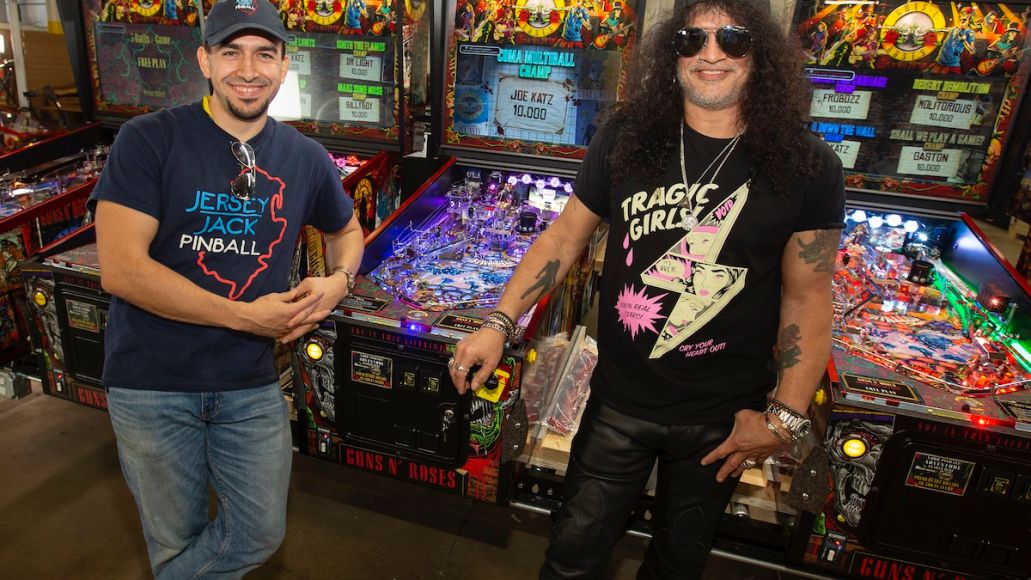 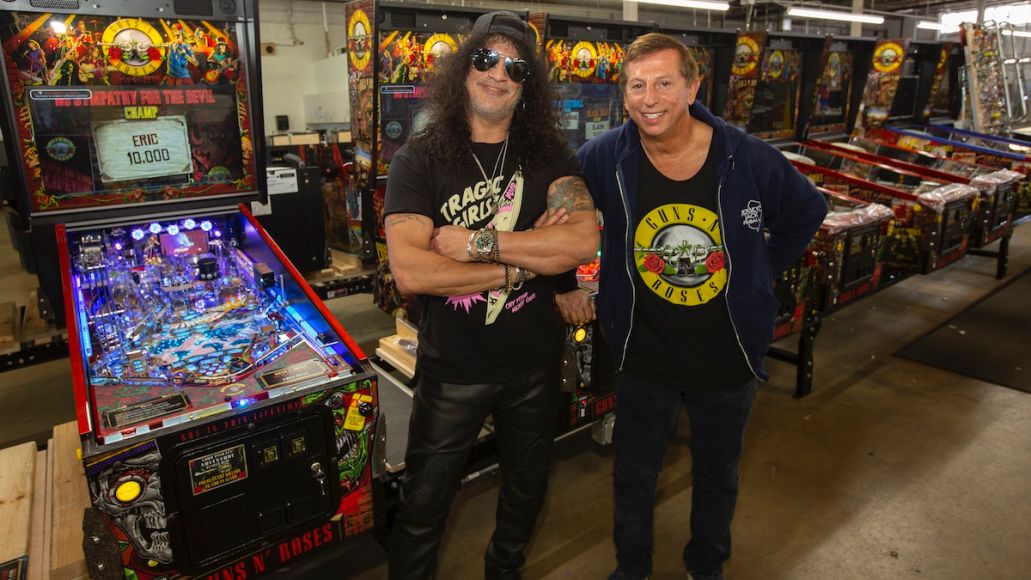 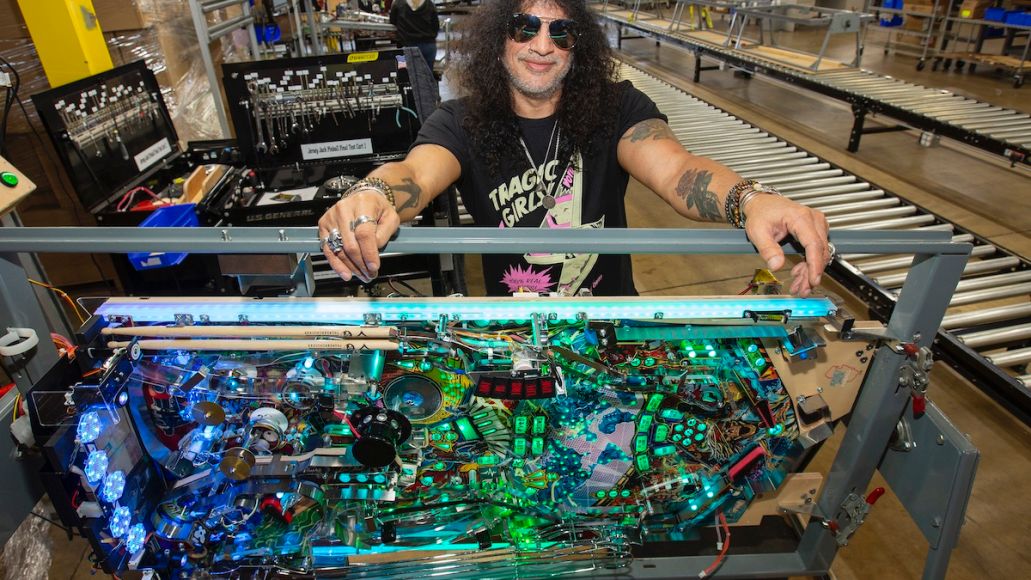 All photos by Barry Brecheisen