On Tuesday, Slash announced the latest guitar in his ongoing collection with Gibson, the “Victoria” Les Paul Standard Goldtop. What he didn’t reveal in the press release was the significance of the guitar’s name, a fascinating detail he shared with us during a new interview.

The “Victoria” Les Paul Standard Goldtop is a beautiful guitar, with a maple top, a solid mahogany body, a dark back finish, a C-shaped neck profile, and more of Slash’s personal touches. It’s available now via Gibson and authorized sellers.

We spoke with Slash about his partnership with Gibson and the “Victoria” Goldtop, in particular, and the legendary musician told us an intriguing story about the guitar’s name.

“I’ve been using a Gibson since the first [Guns N’ Roses] record [Appetite for Destruction], but I established a relationship with them starting in 1988. It’s been developing all these years. [Recently] I did this line of different Les Paul Standards that are all different colors. And at the end of that, I said, ‘You know, I’d love to do a Goldtop, as well’.”

He continued, “Back in the late ’90s, I had a bunch of guitars stolen out of my studio in my house. I’ve actually managed to get [just about] all the guitars back, but I never knew exactly who was behind the theft. And one of the guitars I didn’t get back was a Goldtop that was stolen. So, I’ve been trying to find another Goldtop to replace it over the years. Then at some point I found out who was responsible for the theft, not long ago, and her name was Victoria, so I decided to name the guitar after her!”

Stay tuned for more from our interview with Slash, including his insight into the recently released Guns N’ Roses “Not in This Lifetime” pinball machines, his life during the pandemic, and other topics. He also shared his thoughts on AC/DC’s new album, Power Up, calling it a “great f**king record.”

Check out an additional picture of Slash with the “Victoria” Les Paul Standard Goldtop below, and pick up guitars from his Gibson collection via Reverb. 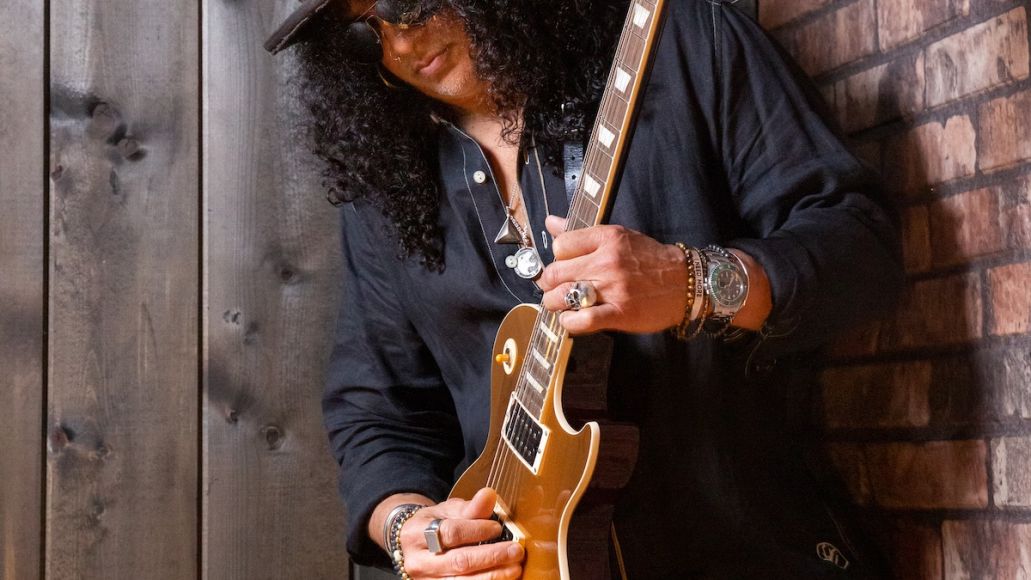 Slash: I Named My New Gibson "Victoria" Les Paul After the Person Who Stole My Old Guitars