At long last, Stephen King’s epic novel The Stand hits CBS All Access. Languishing for years in development hell, the journey from page to screen has been almost as long and arduous as the cross-country treks taken by its characters. Yet, it’s hard to think of a more perfect timing for this story of destruction and renewal than amidst a global pandemic.

Beyond the pandemic parable, larger themes of taking a stand against persuasive evil are central to this story as well. The series opens with a dire warning and call to action from an unseen Mother Abigail (Whoopi Goldberg) that not only fits King’s story, but could easily be interpreted as a message to viewers as we turn the page on a tumultuous year ourselves.

Below, we’ve broken down the essentials of the exciting series premiere, “The End”. From the big questions left on the table to the various Easter eggs littered throughout, we tackle it all. 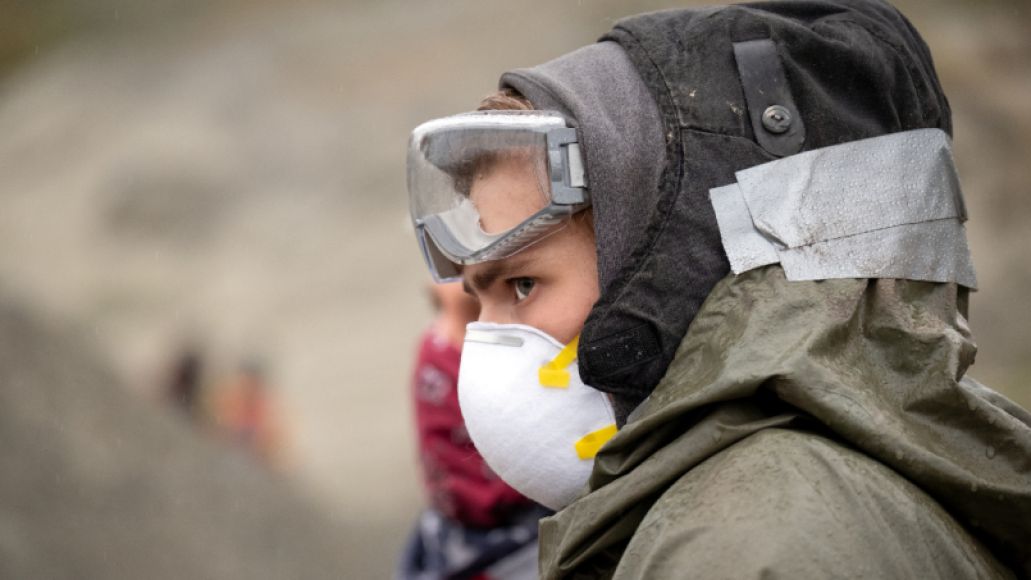 The story begins as workers in makeshift PPE clear rotting bodies from a church. One of those workers bolts outside to vomit, and Constant Readers will recognize him as Harold Lauder (Owen Teague), member of the Free Zone Body Removal Committee. It’s a bit jarring as this event does not occur until well over 600 pages into King’s massive novel; this opening scene abruptly throws us into the non-linear framework this adaptation will use. Instead of a California research facility, our story starts in Boulder, Colorado, where some of those immune to the deadly plague known as Captain Trips have gathered to reform civilization.

King’s novel begins with the outbreak and the first several hundred pages chronicle what amounts to the end of the world as we know it. The second section of the novel follows lone or small groups of survivors as they slowly make their way across the country, guided by mysterious dreams. Taking a cue from Lost, these sections will be told in a series of flashbacks grounded by life in either Boulder or Las Vegas, the destination drawing survivors who may be less than virtuous. This restructuring is a bold choice for such a dense story, and it remains to be seen if the risk will pay off. Constant Readers and King newbies are likely to experience narrative whiplash with the nonlinear format. But maybe that’s the point. 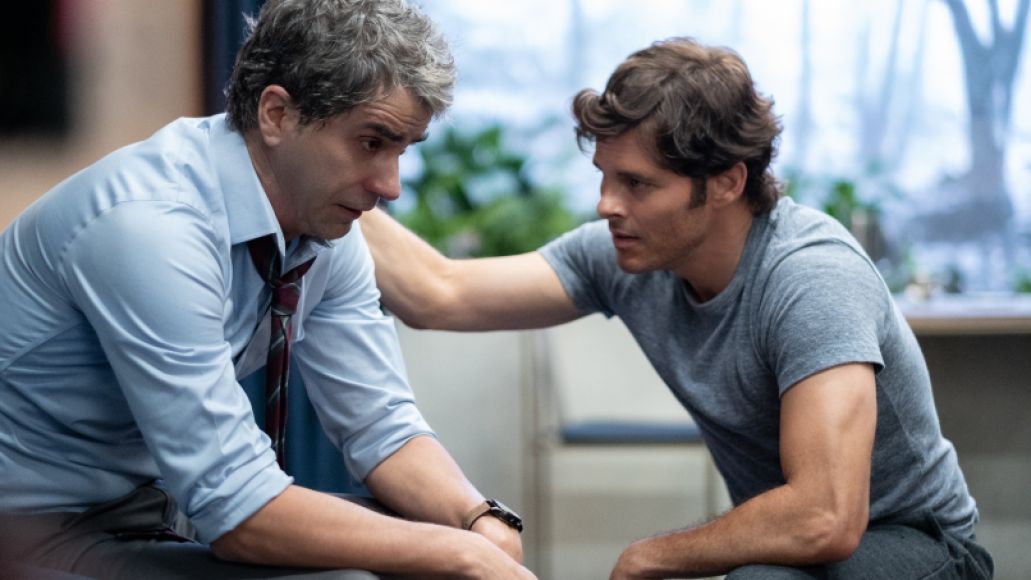 Our first encounter with protagonist Stu Redman (James Marsden) is in a government facility studying infectious diseases. Feeling more like a prisoner than a patient, Stu has stopped cooperating with medical tests in protest at being kept in the dark about his confinement. Enter Dr. Ellis (Hamish Linklater). He’s affable and honest, able to cut through Stu’s resistance with kindness and empathy. He also provides valuable exposition for viewers as we learn that nearly everyone Stu arrived with has died from a mysterious illness known as Captain Trips.

Linklater’s Dr. Ellis is a marked shift from his counterpart in King’s novel, Dr. Denninger, who treats Stu with the same amount of compassion he has for the guinea pig sharing his room. Here, Dr. Ellis builds a rapport with Stu and appeals to his sense of duty in helping others. Though probably coincidental as these scenes were written and shot before the pandemic, it’s a welcome change in a year where countless people refuse to do the bare minimum to prevent spreading a deadly illness.

On the other hand, Dr. Cobb’s counterpart in King’s novel, Dr. Elder, is equally vengeful and murderous, meeting a similar, albeit less mucus-filled, fate.

Don’t I Recognize That Voice? 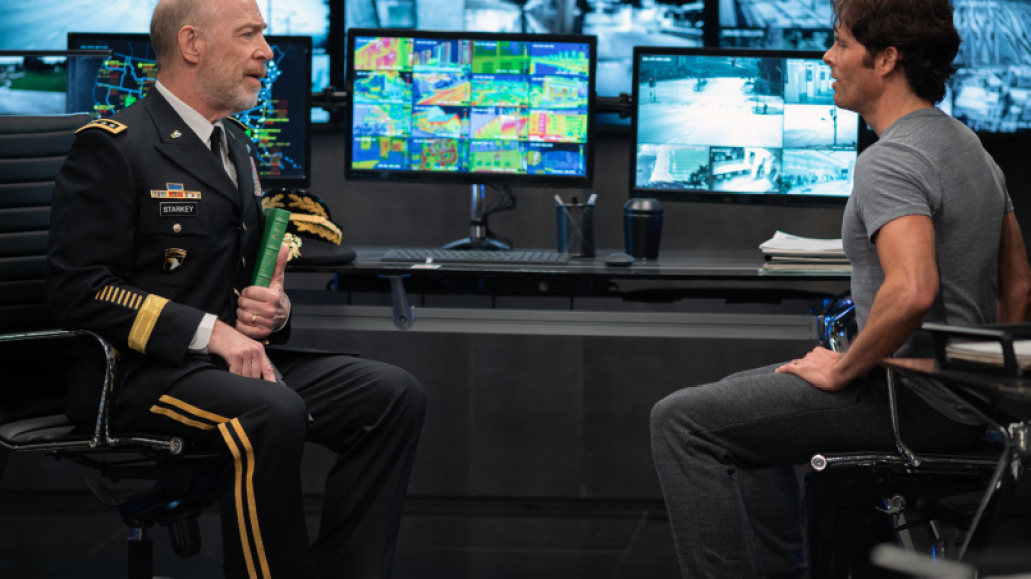 One of the episode’s major reveals is the appearance of General Starkey (J.K. Simmons), commander of the facility in which Stu is confined. It’s a small but memorable role originally brought to life by Ed Harris in the ‘94 miniseries. The casting of Simmons was kept under wraps, and though he’s a welcome presence, his brief inclusion in this adaptation lacks the emotional weight it carries in the original story.

King’s Starkey feels responsible for the incalculable tragedy and attempts to give dignity in death to some of the earliest victims. But here, he comes across as part Howard Hughes, part Big Brother, observing all from his lofty post until the virus gets to him as well. He’s not given much to do, but his reading of Yeats’ “The Second Coming” adds a tragic poignancy to Stu’s escape from the CDC.

Who’s That Soldier and Where’s He Going? 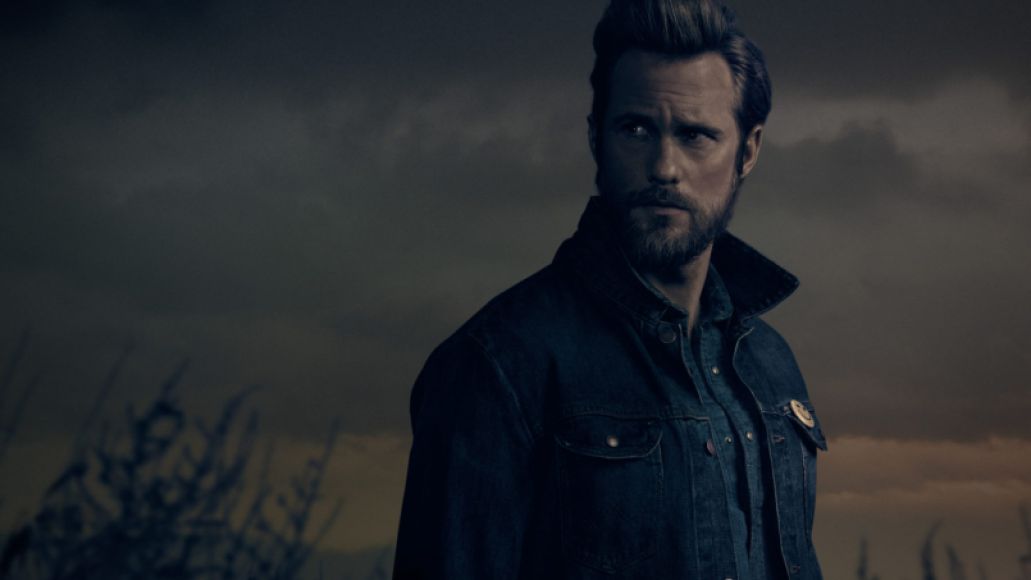 The soldier who started it all, we first meet the infamous Charles Campion (Curtiss Cook Jr.) as he’s careening into an Arnette, Texas, gas station while clinging to life behind the wheel of his car. This crash begins the chain of events that leads to Stu’s captivity, the quarantining of Arnette, and ultimately the end of the world. After a brief introduction to establish Stu’s exposure to Captain Trips, he disappears until the end of the episode when we witness his decision to run.

When the alarm signaling a containment breach goes off, Campion follows orders to shut down the base, but takes advantage of a glitch in the system (more on that in a minute) to flee with his wife and daughter. This is where the disjointed storytelling device may fail the narrative. Viewers not familiar with the book may not make the connection between the healthy character we see at the end of the episode with the driver on death’s door from earlier.

Now about that glitch: In our Losers’ Club recap episode (see above), co-host Randall Colburn points out that, in the novel, the glitch happens naturally whereas here we see that Flagg is responsible for keeping the elevator door open long enough for Campion to escape. Narratively small, it’s a seismic shift in Flagg’s motivations and power over the events of the story that could have larger ramifications down the road. We’ll have to wait and see how it shakes out.

We Need to Talk About Harold 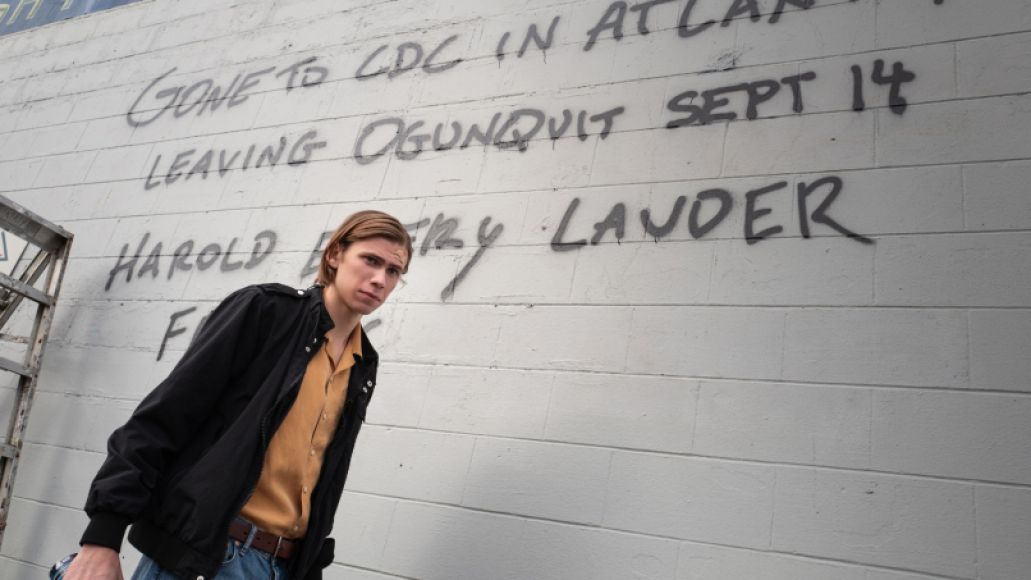 Episode 1 wisely centers around MVP Harold Lauder. Owen Teague plays him to nuanced perfection, capturing the insecurity, pomposity, and rage of one of the most dynamic characters in King’s vast tapestry. In the novel, we don’t meet Harold until the world is over and we hear his stories of being bullied secondhand. But here, we see him attacked, chased, and harassed by others and mistreated by his family. We witness the reality that has shaped Harold and the pain he finds so difficult to let go.

If not for Teague’s fantastic performance, we might be tempted to pity him, but his callous reaction to hearing a suicide combined with his vitriolic journal entries add depth to this complicated character. Teague’s shit-eating grin as practiced in the mirror is chilling as is the fraction of a second where it slips, revealing the hatred lurking beneath. In Harold, we see the payoff to the fractured narrative device framing the story. Within a single episode, his murderous tendencies are revealed, and his choice to go to the dark or the light sets up the central conflict of the story. 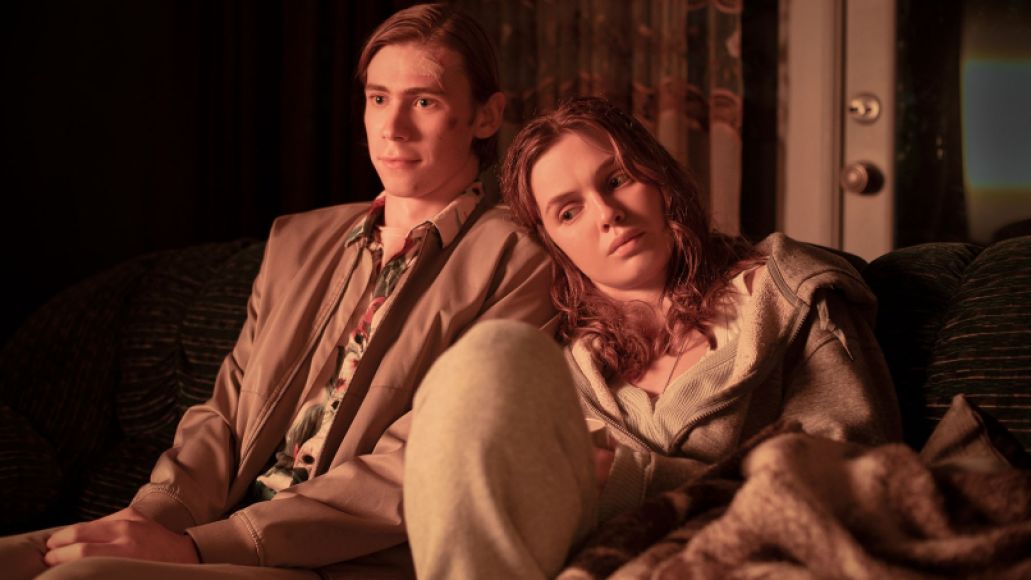 Frannie (Odessa Young) is introduced in essentially the same way as King’s originally truncated novel with one big exception. After the heart-wrenching and physically demanding job of burying her father in the garden, Frannie attempts suicide by pharmaceutical overdose before being rescued by Harold.

Though it’s creepy that he intrudes on her space while she’s in the shower (see above thoughts on Harold), this inclusion allows the two characters to bond after tense moments earlier in the episode. Combined with Young’s unflinching performance, this narrative alteration brings humanity and relatability to Frannie missing from Molly Ringwald’s perhaps miscast performance in the original miniseries. It also begs an uncomfortable question, “What if the only other person left alive is someone you can’t stand?”

Was That an Easter Egg? 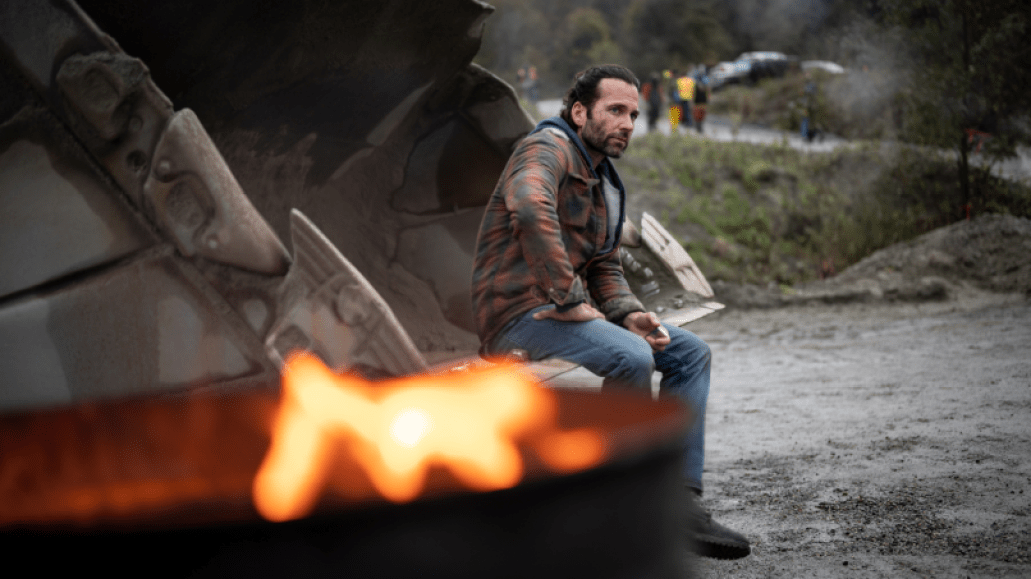 While clearing bodies in Boulder, Harold shines a flashlight on a movie poster from Sam Raimi’s 1990 superhero film, Darkman. Though not related to the story, it’s a fun reference to The Stand’s central villain, Randall Flagg, also known as the Dark Man. Gotta love that word play. What’s more, it’s also a slight nod to Raimi’s appearance in the original 1994 miniseries.

Before leaving Ogunquit, Harold receives a rejection letter from Cemetery Dance. The award-winning horror magazine and publishing company has published limited editions of King’s work, and founder Richard Chizmar co-authored the novella Gwendy’s Button Box with the man himself. Another entry in the Gwendy saga is due next year.

And speaking of that rejection letter, Harold stabs it on a large nail containing many similar letters in his bedroom. This is a reference to King’s own practice of impaling his rejection slips as a burgeoning teen author. He wrote of this practice in his memoir, On Writing, remembering that, “By the time I was fourteen, the nail in my wall would no longer support the weight of the rejection slips impaled upon it. I replaced the nail with a spike and went on writing.”

The price of Harold’s typewriter — at Derry and Sons Antiques, mind you — is listed for $217. Then, keep an eye on the countdown with Campion at the end there and you’ll see its cinematic twinner: 237.

It’s a small moment, but Stu’s pause to close Dr. Ellis’ eyes as he lays dying is reminiscent of General Starkey’s trip to the site of the original outbreak in which he restores dignity in death to the first casualties of the outbreak. It’s not only a sweet callback to a memorable scene in the novel, but it’s also a tender moment, revealing the character of a protagonist we’ve only just met, but will follow through the course of the series.

Stephen King's The Stand, Explained: We Need to Talk About Harold