Setting the Stage: KISS were smack-dab in the middle of their “End of the Road” farewell tour when COVID-19 effectively shut down the concert industry in mid-March. Instead of sitting out the rest of the year entirely, the band opted to close 2020 with a bang: a livestream of an outdoor performance from the Royal Beach at Atlantis Dubai (with more than 50 cameras in tow, and a 360-degree view of the stage) on New Year’s Eve.

And it was quite a massive undertaking, as evidenced by a near hour-long documentary that preceded the performance. The pre-show special started with footage of the band arriving at the location (without makeup), discussing Dubai and what makes it unique (Paul Stanley plans on returning with his family on vacation), and the extensive safety protocols that had to be followed by everyone involved in putting together the show on site. But probably the boldest statement of all was when the director of the show, Daniel E. Catullo III, declared that this would be the “biggest production in the history of KISS.”

Taking the Stage: The ginormous stage was set up so that instead of it staring out at a large audience — as KISS are accustomed to at their shows – it was a body of water and a large hotel building that Gene Simmons, Paul Stanley, Tommy Thayer, and Eric Singer faced as they performed. Three large screens (one behind the band, another to the left of the stage, and another to the right) showed close-ups of the band, vintage footage, and scenery pertaining to specific songs.

As KISS entered from high above the stage via “pods,” the familiar riff of “Detroit Rock City” served as a fitting opening. Setlist-wise, those hoping to experience some major shake-ups or shockers for this performance were out of luck, as the livestream gig primarily followed the same exact songs as the last “End of the Road” shows had. In other words, no surprise renditions of “Larger Than Life”, “Is That You?”, “The Oath”, etc.

One thing that the close-up shot performance afforded the viewer was to notice things they wouldn’t have otherwise spotted from the 37th row or the upper deck of an arena … such as the fact that there were thunderbolt designs on the sides of Tommy’s boots that went slightly higher than the knee-high portion; Eric wore a T-shirt rather than an expected KISS costume-top; Paul at one point played a new guitar that looked like a cross between a Les Paul and his trusty ol’ Iceman; and that Gene still sported the baddest codpiece in all of rock.

A faint audience cheer was heard between songs, which led one to believe that the crowd must have been comprised of those watching from the balconies of the hotel, and/or perhaps standing across the body of water. The lack of a traditional audience close to the stage made it a bit odd to hear the “Hey-aye-aye-aye-yeah!” call and response in the middle of “I Love It Loud” more silent than usual. And before the start of “Calling Dr. Love,” Paul was clearly heard as he voiced his support of COVID vaccinations. 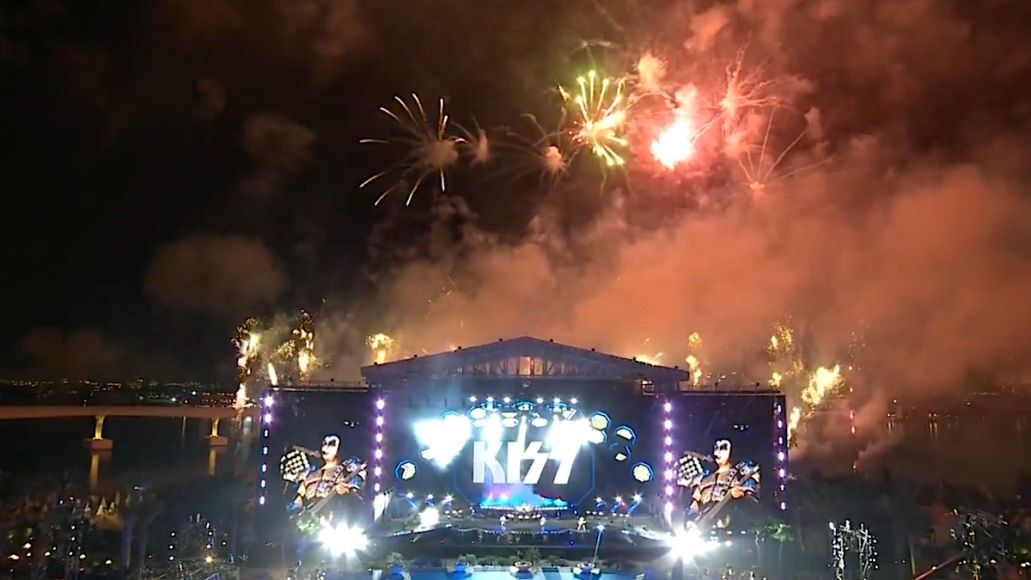 Focusing on the classics, the vast majority of the set was comprised of tunes from the makeup era, with only a trio of non-makeup tunes performed — “Heaven’s on Fire”, “Tears are Falling”, and “Lick It Up” And nearly all the expected trademarks of a KISS concert were featured — Gene blowing fire at the end of “War Machine”, Paul hitching a ride on a zip-line for “Love Gun”, and rockets/sparks shooting out of the guitar of “The Spaceman” during his unaccompanied solo (a character created by Ace Frehley, and now replicated by Tommy).

But one usual concert highlight that was noticeably absent was that “God of Thunder” (which saw Gene hoisted up above on a pod, with lightning being flashed behind him on the screen) was not prefaced by the expected blood vomiting. It turns out that Dubai is quite a conservative city, and that the band opted to avoid potentially offending the locals (although, pre-filmed images of a “bloodied” Gene were shown behind him as he was hoisted into the air). Additionally, a few song lyrics had to be altered – thus, the phrase “virgin soul” in “God of Thunder” was replaced with “sacred soul” (although it also sounded a bit like “sacred goal,” you be the judge…) and the word “bitch” in “100,000 Years” was dropped.

Two definite highlights of the evening were performances of the early classic nuggets “Parasite” and “100,000 Years,” the latter of which was complete with an extended drum solo (Alive! style) – including a bit where Eric wiped his arms with a towel while still keeping the beat with his fast-moving feet. And a close-up of one of his bass drums featured a small sticker of the “2112 man” – as an obvious nod to the late/great Neil Peart (who passed away at the beginning of 2020). Additionally, a standout effect was used during the drum solo, in which seemingly “100,000” Eric Singers flashed behind him on the screen.

Toward the end of the set, “I Was Made for Lovin’ You” was introduced as the band’s “biggest international hit.” And on “Black Diamond,” a song that used to be the very last tune of KISS concerts (but not on this night), the drum riser rose once more (the first time was during the drum solo) – showing the dual-cat design from the Love Gun/Alive II tour, back when the original Catman, Peter Criss, occupied the drum throne.

Trying to perfectly synchronize the show’s grand finale with the stroke of midnight, a bonus tune not expected to be performed, “Strutter,” was added as a special surprise (a song not performed at “End of the Road” shows earlier this year). Around that time, a chap from Guinness Book of World’s Records came out to confirm that KISS set the record for “most flame projections launched simultaneously in a music concert.” A tweet from the band later confirmed that the band also set the record for “highest flame projection in a music concert.”

And after the final seconds of 2020 were counted down (good riddance!), KISS ended the night with a bang — literally — with “Rock and Roll All Nite”, and a seemingly never-ending onslaught of fireworks and explosions going off around them and in the sky, lasting even after Paul did his ritualistic guitar smashing bit and the band had exited the stage.

Despite being off the road for nearly a year, the “KISS 2020 Goodbye” performance showed that KISS will have no problem picking up exactly where they left off once their “End of the Road” farewell tour gets fired up once again — all while providing fans a grand glimpse of their heroes from the comfort of their own homes.

If you missed the show, a replay is available here. See the full setlist, the Guinness World Record confirmation, and additional screenshots from the concert below.

Setlist:
Detroit Rock City
Shout It Out Loud
Deuce
Say Yeah
I Love It Loud
Heaven’s on Fire
Tears are Falling
War Machine
Lick It Up
Calling Dr. Love
100,000 Years / drum solo
Cold Gin / guitar solo
God of Thunder
Psycho Circus
Parasite
Love Gun
I Was Made for Loving You
Black Diamond
Beth
Strutter
Do You Love Me
Rock and Roll All Nite 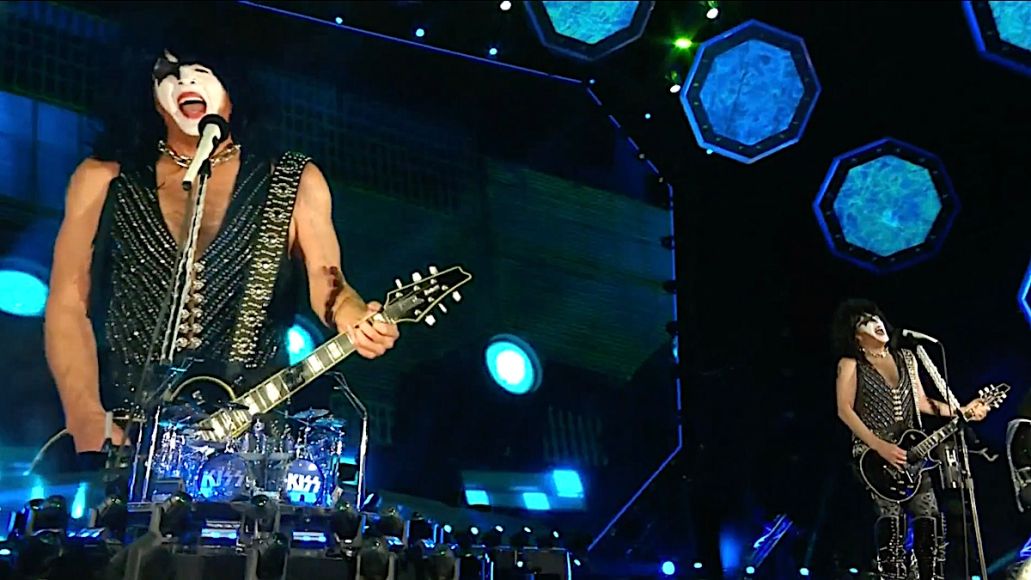 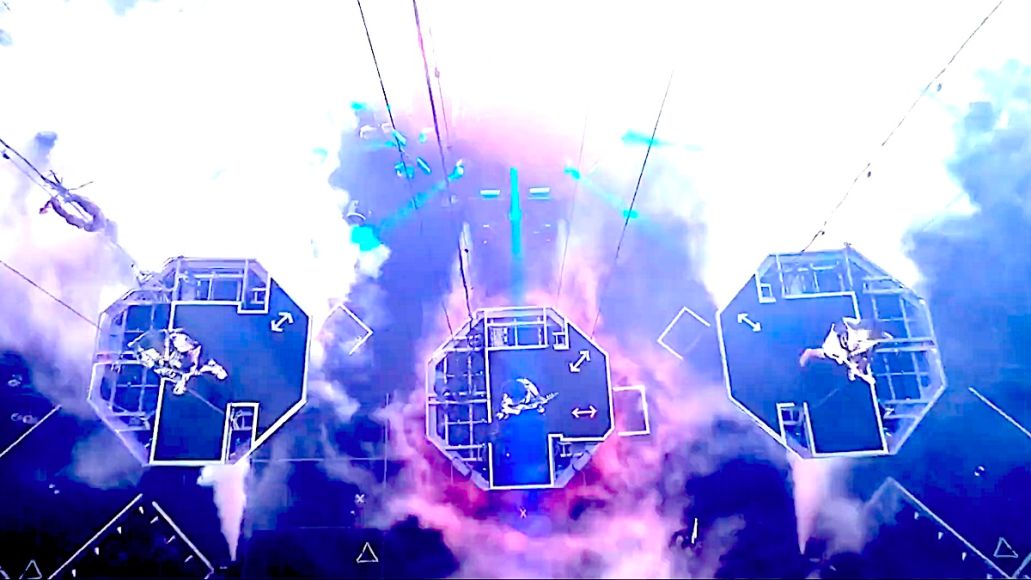 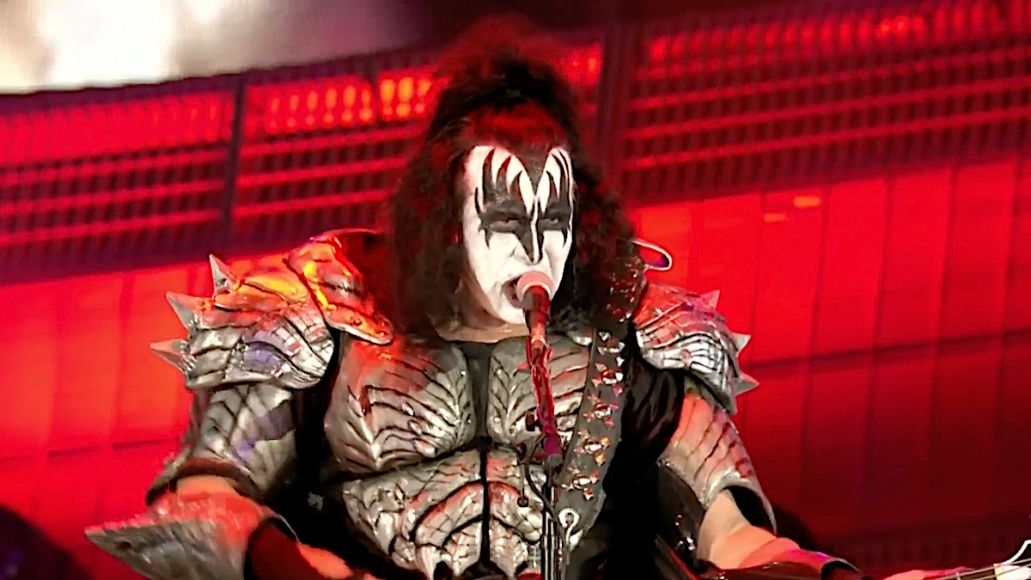 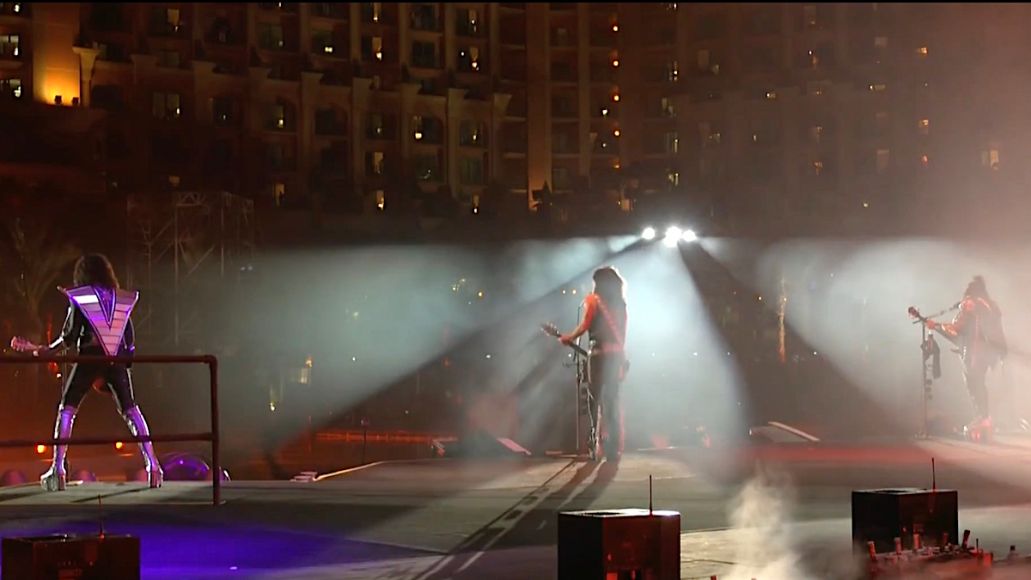