Editor’s Note: We continue our celebration of the life and art of David Bowie with our latest installment of Crate Digging, this time for 10 Ziggy Stardust-approved albums full of aliens and space travel that every music fan should own. Keep checking back all week for more new and reshared content reflecting on our favorite Starman. And, if you’ve missed anything, you can experience it all again here.

Space, as both Jean-Luc Picard and Elon Musk would say, is truly the final frontier. From the time humans could open their eyes and look skyward, we have been obsessed with getting to space, understanding it, trying to grasp the universe in our relatively simple terms. Space is still a mystery to the most informed astrophysicist, and that mystery has served as inspiration for music spanning decades. The wonder and joy of music coincides with that of discovery and challenge, lending itself perfectly to the wishes we make on shooting stars at night.

10 Progressive Rock Concept Albums Every Music Fan Should Own

Ranking: Every David Bowie Album from Worst to Best

If we are never able to explore the farthest reaches of space as sci-fi would predict, at least the music made about space offers an experience just as expansive. With the aid of their instruments, voices, and true love for the unknown, the following artists created odes to space that still stand tall despite the years that have passed. After all, space is timeless — and so are these wonderful albums inspired by it. 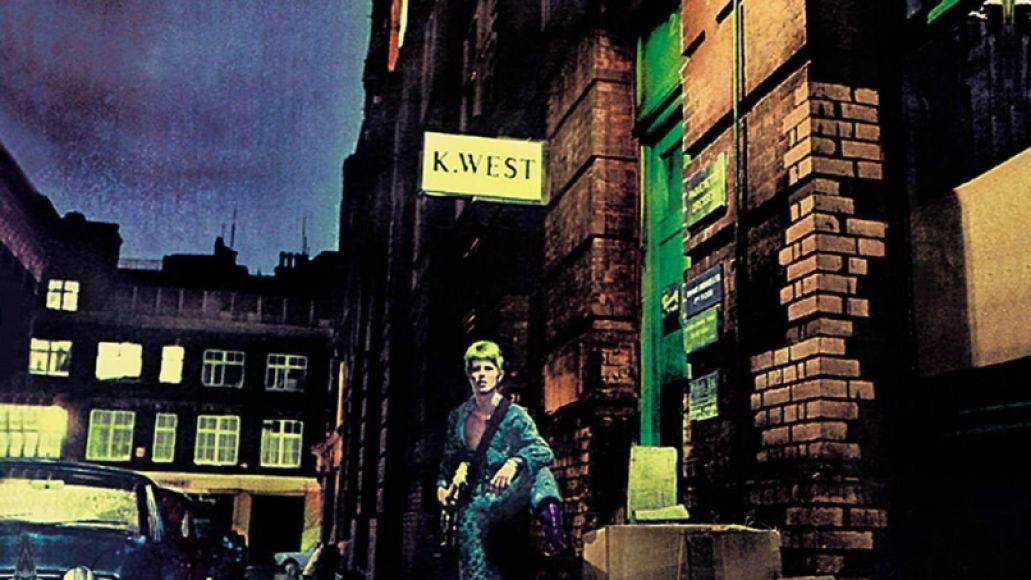 Growing up, I thought the lyric suggested that Ziggy Stardust was “making love with his eagle,” rather than his “ego,” and in an album full of Martian spiders, tigers on Vaseline, and pink monkey birds, I could’ve been right. David Bowie unashamedly embraced the alien, the absurd, at a time when rock and roll was a little too self-serious about its absurdities. On The Rise and Fall, we feel the oddity of superstardom, how it transforms a person’s identity, and if you’re not careful, leaves you alone to float in space like a leper messiah. In the end, Bowie reaches his hand out to the lonely, alienated listener with a promise not of salvation through fame, but through relationship and hope in the simple knowledge that “you’re not alone.”

Most Out-of-This-World Moment: That pinging, Morse-code-like keyboard bit before that then erupts into the symphonic, gloriously harmonized chorus of “Starman”. –Christopher Thiessen 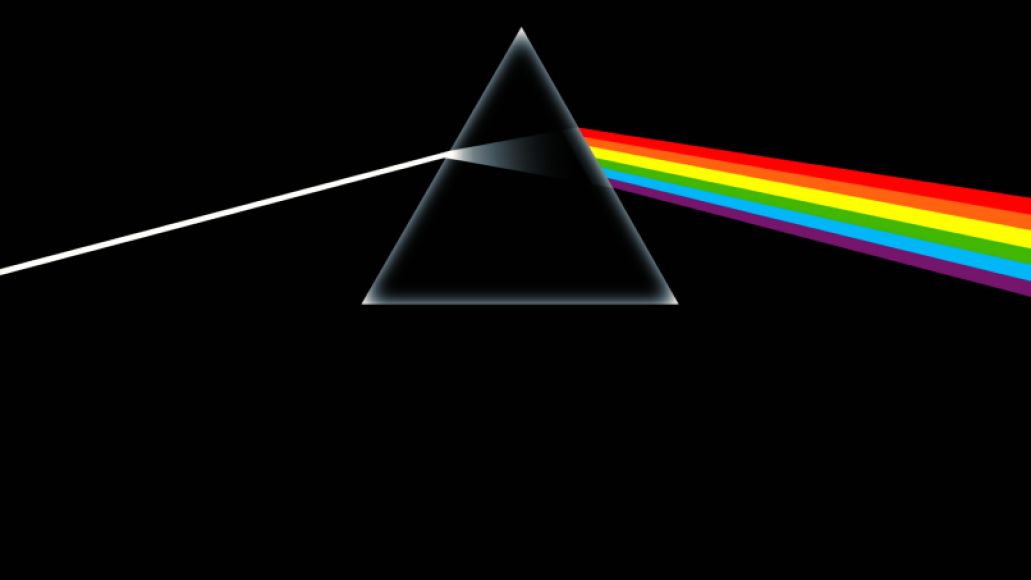 Ironically, the two subjects Pink Floyd explores on Dark Side of the Moon as sources of human madness — the limits of time and scarcity of money in a competitive, capitalistic culture — are the very things the 1973 record has perpetually defied. According to Amazon, it was still the third-best-selling vinyl record of the year, nearly 50 years after release. Unfortunately, little of our culture has changed in that period. The same anxieties brought on by scarcity remain ubiquitous, which would explain why we keep returning to this space rock classic, why together we keep trying to escape Earth and the dark forebodings attempting to explode our heads. 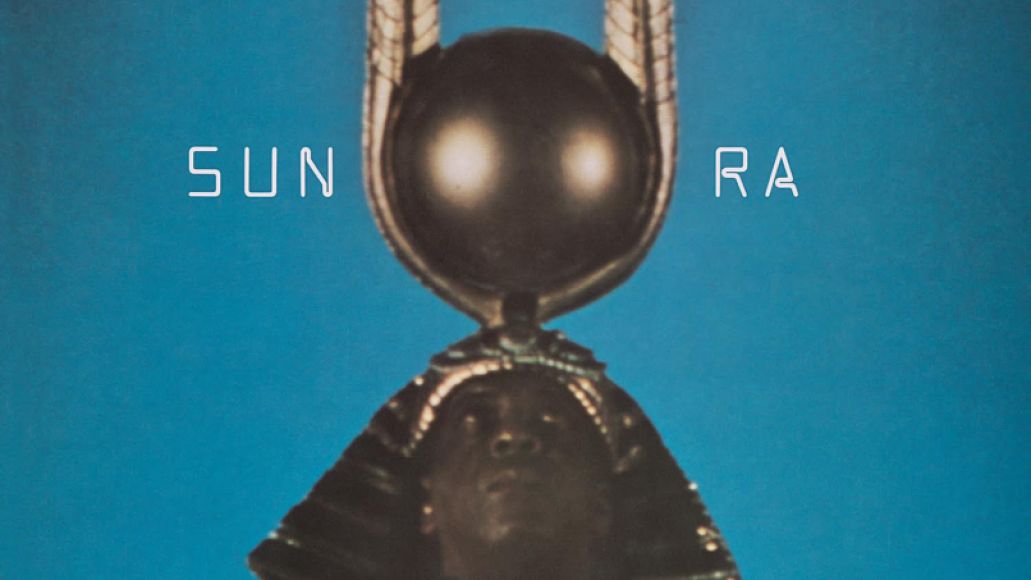 A godfather of space-themed music and Afrofuturism, Sun Ra charted a trajectory that could not be contained in this world. His music was for those who knew that there was more life, more worlds beyond the reality that they experienced on planet Earth. As a bandleader, pianist, organist, and chief interpreter of his own sophisticated cosmic philosophy, Sun Ra and his Arkestra’s recorded Space Is the Place is a masterful space-age jazz album. Space Is the Place is a spectacular introduction to Sun Ra’s free-form, experimental, space-influenced avant-garde jazz discography. Sun Ra’s influence still looms large and his vision of humanity is still captivating the cosmos.

Most Out-of-This-World Moment: The title track is an epic, 21-minute rendezvous with the galaxy where space and time are both elapsed. It’s the quintessential Sun Ra track that invites listeners to take flight into the great unknown of the universe. –Rashad Grove

Pick up a copy of Space Is the Place here… 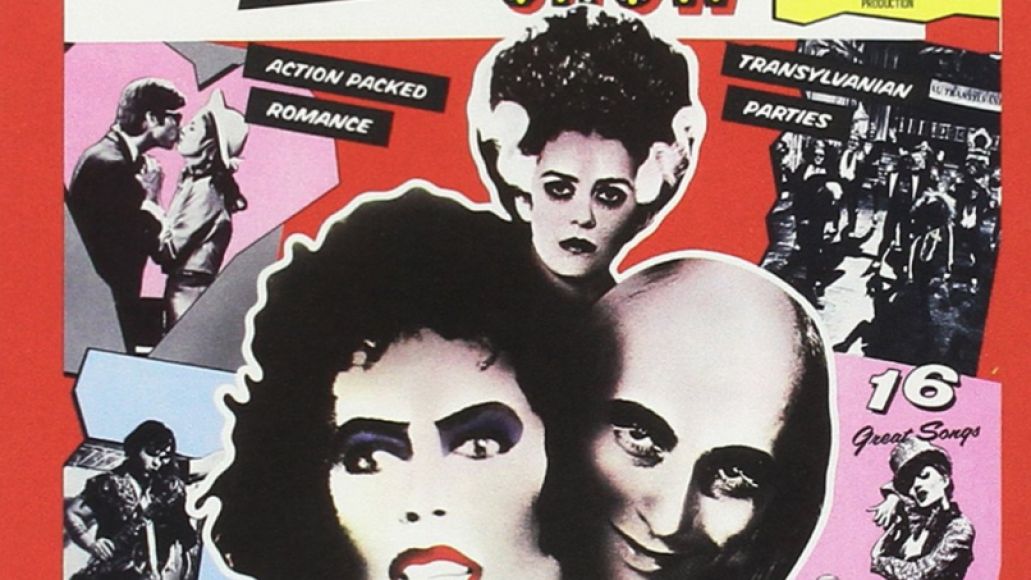 After the worldwide success of The Rocky Horror Show musical, it was adapted into a film, The Rocky Horror Picture Show in 1975,  which would eventually become a cult classic. Not only was the film light years ahead of itself, but it was accompanied by a killer soundtrack. The album adroitly blends catchy songs with themes of sci-fi fantasy under the auspices of Dr. Frank-N-Furter, the resident alien leader and the mad scientist of this group of eccentrics. It’s a non-stop rollercoaster ride reminiscent of old-school horror and sci-fi films, drenched in ’70s glam rock. How could you ask for anything more?

Most Out-of-This-World Moment: If you want to travel through different genders, identities, time zones, and universes, then “Time Warp” is the essential song for the journey. As the signature song of The Rocky Horror Picture Show, “Time Warp” captures the spirit of the musical, the film, and all the aliens across the world who love it. –Rashad Grove 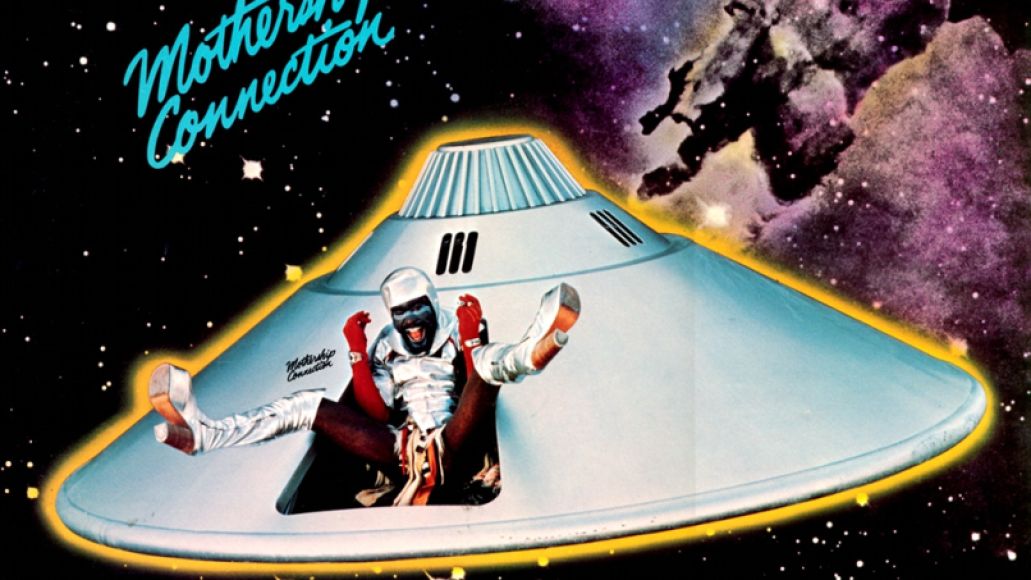 When it comes to outer space funk, George Clinton is the captain of the intergalactic mission to “Tear the Roof Off the Sucka”. As a frontman, producer, and songwriter of Parliament, Clinton merged his love of Star Trek — assembling top-tier musicians such as Bootsy Collins, Bernie Worrell, Fred Wesley, and Maceo Parker — with infectious songwriting and took the funk into another stratosphere with the undisputed classic Mothership Connection. Undoubtedly one of the crown jewels in Parliament’s canon, it was the first in a long line of concept albums to explore the P-Funk universe and cosmology. Combining science fiction and Afrofuturism, Parliament created their own mythology as aliens who have come to “save a dying world from its funkless hell.” With alter egos such as Star Child, Lollipop Man aka The Long-Haired Sucker, Mothership Connection is the tale of the funk that came to rescue planet Earth.

Most Out-of-This-World Moment: While each track serves up a funk experience that lifts listeners to another galaxy, the opening salvo, “P-Funk (Wants to Get Funked Up)”, is the mission statement of the Mothership Connection enterprise. –Rashad Grove

Pick up a copy of Mothership Connection here… 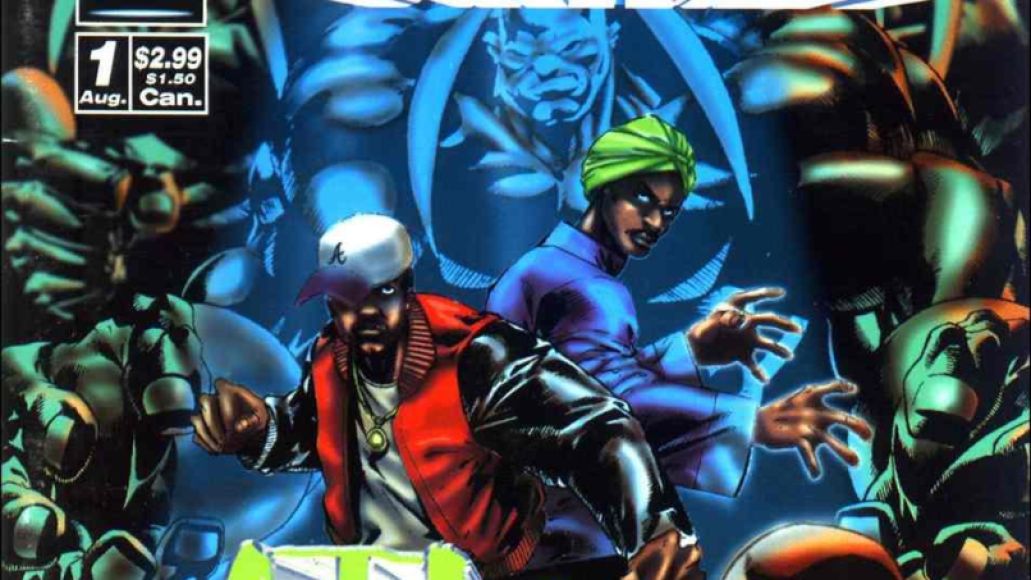 Outkast took the hip-hop world by storm in 1994 with their game-changing debut album, Southernplayalisticadillacmuzik. Removing all doubt about the possibilities of a sophomore jinx, the dynamic duo entered an alternative universe with their follow-up classic,  ATLiens. The record saw Outkast transformed from “pimped-out players” into hip-hop comic book superstars who had descended upon Earth from another planet, the ATL. ATLiens was more than a record; it was a movie with one of the most futuristic album covers of all time. With other-worldly production from Organized Noise, ATLiens remains a tour de force, where Big Boi and Andre 3000 become superheroes, and the ATL is the capital of their Black Universe.

Most Out-Of-This-World Moment: Lead single “Elevators (Me and You)”signaled that Outkast was rising into rarefied air. While the track was ATL to the bone, the sonics were giving off alien vibes. ATLien vibes to be more precise. –Rashad Grove

Pick up a copy of ATLiens here…

Spiritualized – Ladies and Gentlemen We Are Floating in Space (1997) 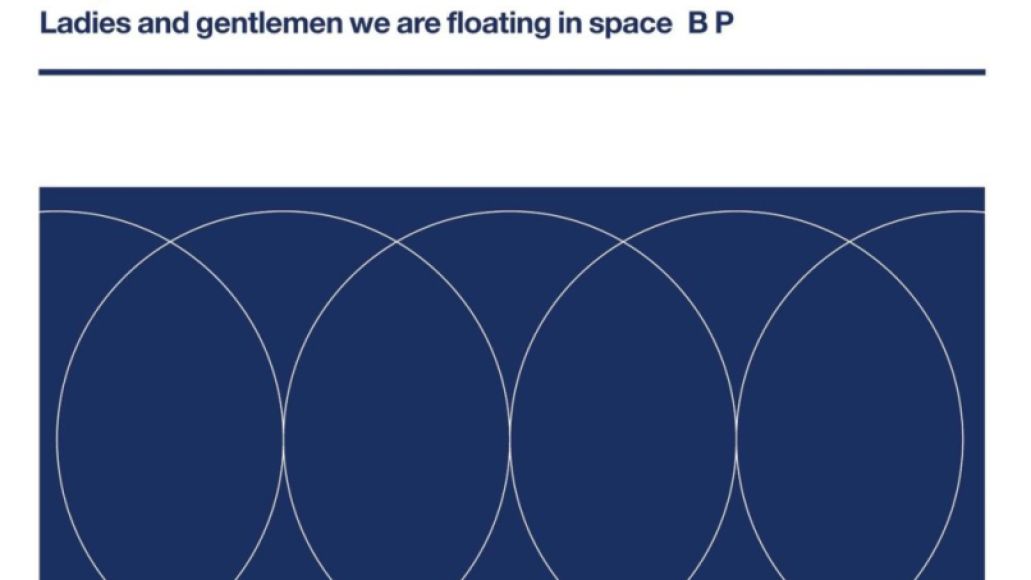 Spiritualized hit gold with the ethos and sonic comfort of Jason Pierce’s messages to the stars in Ladies and Gentlemen We Are Floating in Space. The album feels like both a hug and a sharp awakening to the realities of life, a journey towards self-understanding through equal parts slow-motion and frenetic movement. The title track lulls you into a sense of wary comfort, immediately waking you up with the raucous anthem “Come Together”, a track that I can’t fault for stealing a Beatles title because it is just that good. During songs like clear highlight “I Think I’m in Love” and “Electricity”, Pierce’s clear talent for creating indie-rock edge from his previous experience in group Spacemen 3 is indisputable. The record articulates the wild reality of living in the cosmic soup we do, and at the end, we’re left wanting even more of his extraterrestrial insight.

Most Out-of-This-World Moment: The synthy overture of “Broken Heart” prepares a listener for the eventual end of the album by letting them down slowly, cradled by Pierce’s hypnotic vocals and the horn motif beneath them. It feels like — and excuse me here — you’re floating in space for real, as the symphonic arrangement of the track leads its listeners towards a sense of some deeper awareness. “Broken Heart” is one of those songs that makes anything magical by virtue of its celestial soundscapes, one that is certainly perfect for any kind of stargazing. –Clara Scott 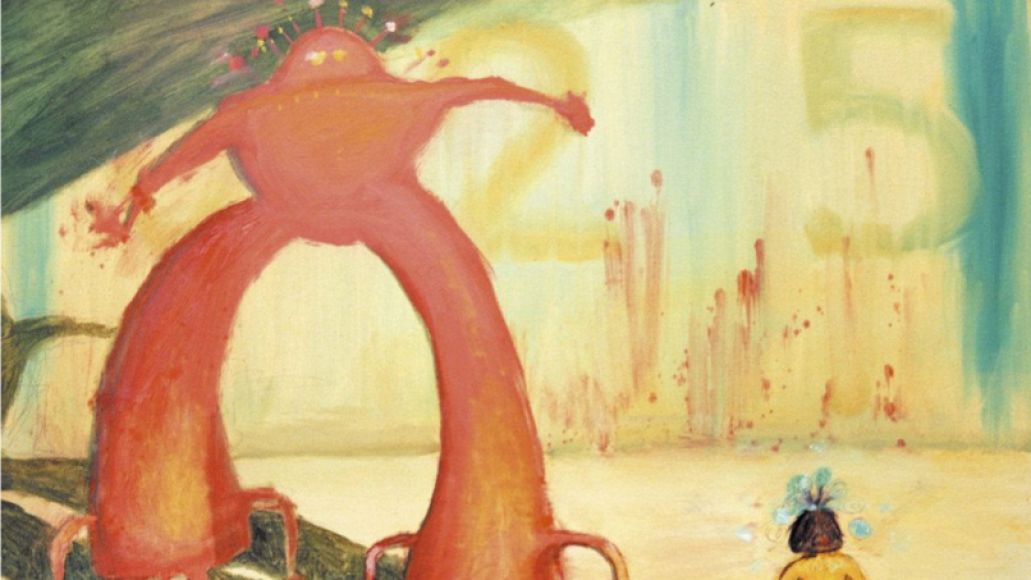 That this record hasn’t been adapted as an anime yet is a tragedy. Imagine The Flaming Lips soundtracking an onscreen, interplanetary clash between Yoshimi, a Battle Angel-esque karate master, and the extraterrestrial pink robots who represent her ongoing conflict with cancer. Imagine as they contemplate mortality alongside their young protagonist and realize the gift of the present as they float through space. Imagine the heartwarming tearfest as Yoshimi lands in the psychedelic landscape of a Martian volcano, soaks in the beauty around her, and embraces the inevitable setting sun. Well, if an adaptation never comes, at least we can return to this masterpiece, kill the lights, watch the ceiling, and defy both gravity and grave for 47 magical minutes.

Most Out-of-This-World Moment: The fat bleep-bloops of synthesizers and Streven Drozd’s cacophony of clanging percussion, interrupted by intermittent, ear-splitting shrieks on “Yoshimi Battles the Pink Robots, Pt. 2” is the most vivid musical expression of a space battle I can imagine. –Christopher Thiessen

Pick up a copy of Yoshimi Battles the Pink Robots here… 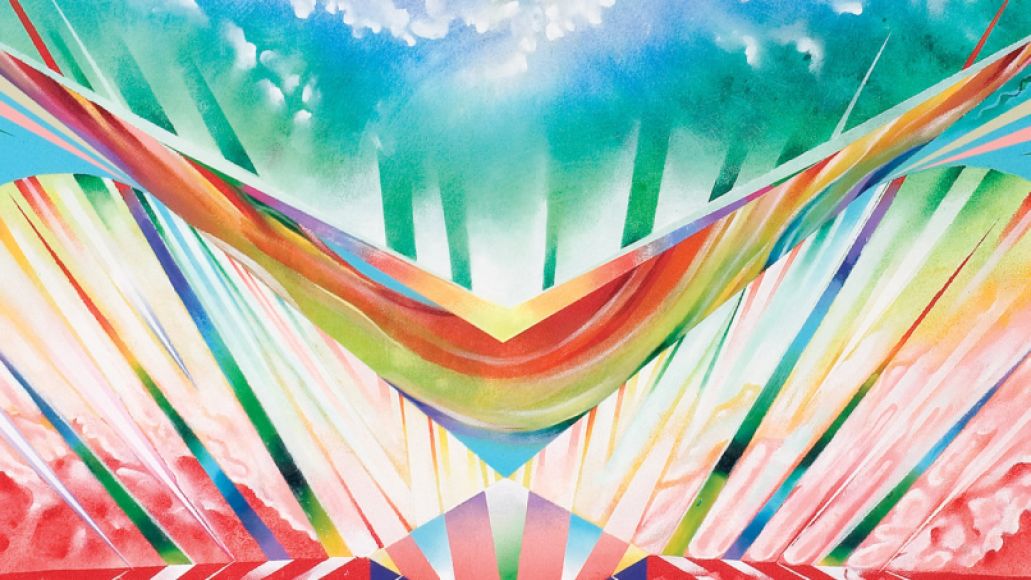 Beverly Glenn-Copeland’s 2004 record Primal Prayer is just as much of a spiritual experience as its title would suggest — his decades-long mastery of choral, ambient, and instrumental arrangements are all but obvious in every track. Released two years after Glenn-Copeland began publicly identifying as a trans man, the celestial and immersive album creates a sense of self-embrace and readiness that can only be expressed through songs like “La Vita”, in which he sings, “The heart says, ‘Seek the light within’/ The heart says, ‘Let the dance begin.’” The dance certainly began with those words, and it continues long after the final song has ended, asking listeners to break their earthly chains and discover something more.

Most Out-of-This-World Moment: Throughout the seven-minute-long track “Heaven in Your Heart”, Glenn-Copeland truly takes his listener on the trip of a lifetime. Through ambient noise and trip-hop beats, the essence of his lyrics shines through no matter their experimental bent. Think Andrea Bocelli meets 2001: A Space Odyssey — I promise you won’t be disappointed. –Clara Scott

Pick up a copy of Primal Prayer here… 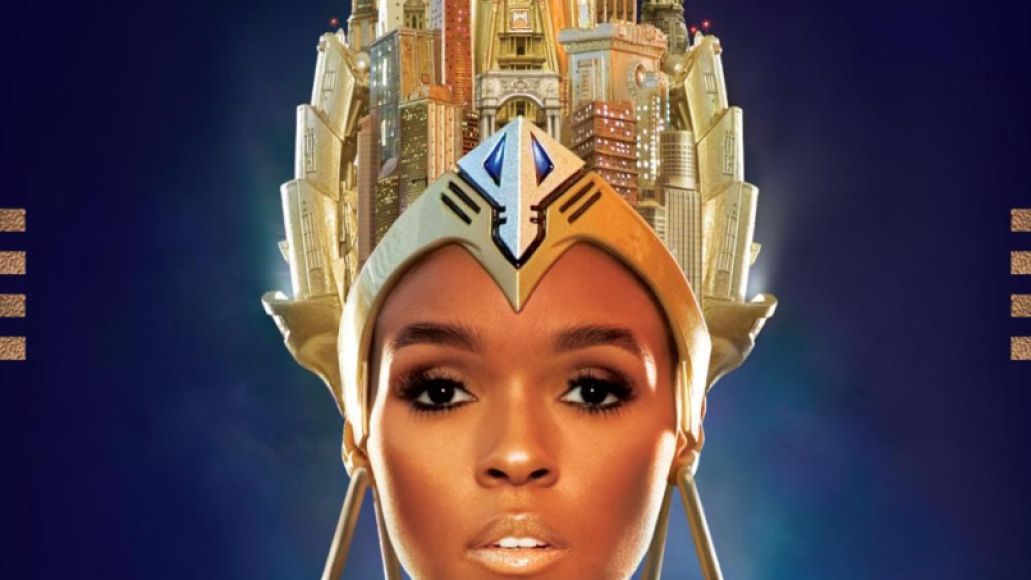 For Janelle Monáe, dance is an act of ascension. Whether it’s a “Tightrope” walk or a Sudanese-Congolese-inspired rock and roll, dance is the means by which Monáe’s futuristic android, Cindi Mayweather, rises above the “war in all the streets.” Like all great science fiction, The ArchAndroid (as well as the rest of Monáe’s Metropolis series) is deeply rooted in real-world conflicts and injustices, seeking to subvert the status quo of racial inequity and offer a glimpse of a brighter tomorrow, or as she puts it, a “Wondaland.” However, it’s not enough to get lost in a utopian future. Evil can only be overcome by acting in the present. And so we dance.

Most Out-of-This-World Moment: The psychedelic, Lucy-in-the-Sky-ness of “Mushrooms & Roses” is transcendent. Kellindo Parker’s Jimi Hendrix-via-Prince fuzz guitar solo, combined with cinematic waves of strings and Monáe’s tremoloed vocals, is the type of performance you can only give after seeing the whole of the cosmos from outer space, perhaps with some psilocybin help. –Christopher Thiessen

Pick up a copy of The ArchAndroid here…