Editor’s Note: As we continue to celebrate the life and art of David Bowie, we take a look at some of our favorite Starman’s coolest moments. If you’ve missed any of the Bowie content we shared or reshared this week, you can experience it all again here.

Five years ago, the sudden passing of David Bowie sent shockwaves through the whole landscape of popular culture. Born David Jones on January 8, 1947, Bowie was far more than just one of the most groundbreaking, expansive, and fearless musicians of his era; he was also an accomplished actor, painter, sociopolitical advocate, philanthropist, and much more. In a multitude of ways, then, his loss was so tragic and surreal because his life was so inspiring and matchless. (Hell, Flight of the Concords devoted practically a whole episode to him in 2007.)

In honor of his life and death (which happened a mere two days after he turned 69), we’ve compiled the following list of 10 times Bowie demonstrated his one-of-a-kind magnetism and talent. From a pioneering art rock alter ego and enigmatic role in David Lynch’s landmark television show to his prophetic final record and advocacy for equal racial representation on the airways, these are but a few of the many, many instances when the Thin White Duke was the coolest man who fell to Earth.

The Emergence of Ziggy Stardust (1972)

Bowie’s first official alter ego, Ziggy Stardust, was also his most timeless. Combining the androgyny present on earlier albums with the proto-punk edge of Iggy Pop and Lou Reed, Bowie joined peers like Genesis’ Peter Gabriel in bringing otherworldly theatricality to rock music. He’d been formulating the character and narrative since before Hunky Dory released in December 1971, yet he didn’t officially appear as Stardust until a February 10, 1972, performance with the Spiders from Mars at the Toby Jug pub in London. Dressed in eccentric attire and sporting a brilliant red hairdo, he announced a bold and baffling, yet crucial, step in his artistic evolution, as well as pioneering symbol of the power and limitlessness of live performance. –Jordan Blum

Bowie had been obsessed with Orwell’s novel since growing up in postwar Bromley in a house less than a mile away from the birthplace of H.G. Wells. “You always felt you were in 1984,” he said. “That’s the kind of gloom and immovable society that a lot of us felt we grew up in…” And in November 1973, Bowie told William Burroughs that he was adapting the novel for television and gave his NBC TV special the mischievous title The 1980 Floor Show. During the show, he debuted a new song called “1984/Dodo”, one of 20 he claimed to have written for the adaptation. However, attempts to write an actual script with the American playwright Tony Ingrassia didn’t turn into anything.

Orwell’s late wife, Sonia Orwell, also refused permission for his rock musical. “For a person who married a socialist with communist leanings, she was the biggest upper-class snob I’ve ever met in my life,” he told Circus writer Ben Edmonds. Sonia did hate the idea, but, to be fair, she also hadn’t approved any adaptations in any medium since the disaster that was the 1956 movie. So, Bowie’s eighth studio album, initially titled We Are the Dead, was, therefore, a final attempt. “To be quite honest with you… the whole thing was originally 19-bloody-84,” he told Edmonds. “I didn’t ever want to do Diamond Dogs as a stage musical; what I wanted was 1984.” It’s hard to believe an eccentric, hedonistic, bisexual rock star would have had any better luck with a 70-year-old Orwell. –Samantha Lopez 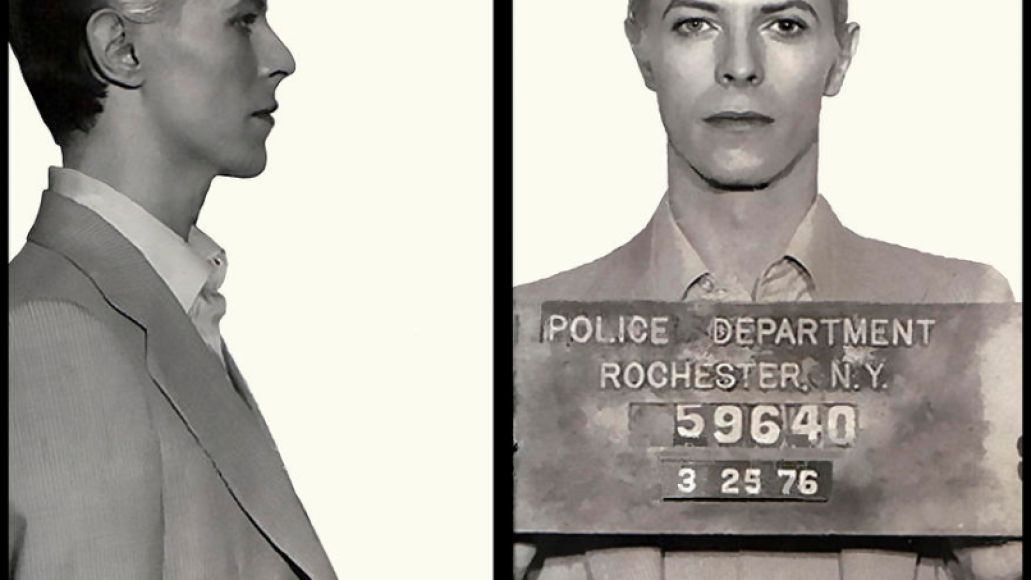 Every cool thing you think you’ve done, just remember that David Bowie did it first and did it better. Bowie spent the first five months of 1976 on the Isolar tour in support of his 1976 full-length, Station to Station. It’s the album notorious for being recorded while Bowie was living in LA, fueled in large part by extreme cocaine psychosis. On the night of March 20, 1976, after performing at Community War Memorial Arena in Rochester, NY, Bowie retired to the Americana Rochester Hotel for a party with Iggy Pop and some new friends. Included in that group of new friends were a couple of undercover female police officers who were following up on a tip that Bowie was traveling with cocaine. While they never found any blow, they did, however, stumble upon the presence of something else. The icon did pretty much everything with an effortless style and grace. Even when it came down to getting busted for weed and taking a police mugshot. Only David Bowie could take a mugshot and make it look like a centerfold. He was just that good. –Samantha Lopez

Five years since the stunning news of his death, all of us all over the world are looking back at all the reasons we love David Bowie. One of the best being a clip that recently re-emerged from MTV of an interview that Bowie did in 1983 with original VJ Mark Goodman while promoting Let’s Dance. Bowie confronts the then only two-year-old network about playing virtually no videos by Black artists. “Having watched MTV over the past few months, it’s a solid enterprise with a lot going for it,” Bowie said. “I’m just floored by the fact that there’s so few black artists featured on it. Why is that?”

People like to say Bowie was putting Goodman in an awkward position, and the VJ did attempt to defend his employers. “I think we’re trying to move in that direction,” he said. “We want to play artists that seem to be doing music that fits into what we want to play on MTV. The company is thinking in terms of narrow-casting.” But this evasive response did little to address Bowie’s valid questions. “The only few black artists one does see are on at about 2:30 in the morning until 6:00,” Bowie said. “Very few are featured prominently during the day.” The legend has many legacies he’s left behind, but being one of the few white voices in rock brave enough to take on MTV directly is one of the most admirable. –Samantha Lopez

Of all his memorable acting roles, Bowie’s portrayal of antagonist Jareth the Goblin King in Jim Henson’s 1986 dark fantasy film Labyrinth stands out above the rest. Naturally, he launches into several enjoyable songs throughout his quest to turn Toby (the infant half-brother of Jennifer Connelly’s Sarah) into a goblin; however, “Within You” is his hippest set piece. Basically, he chases Sarah around an M.C. Escher-esque room while singing a synthy ballad that’s equal parts romantic and spiteful. Both vocally and physically, it’s an evocative blend of fantastical and ominous sexuality as only Bowie could pull off. –Jordan Blum

As Phillip Jeffries in David Lynch’s Twin Peaks: Fire Walk with Me (1992)

Phillip Jeffries is a strange character — but then again, in the world of Twin Peaks, who isn’t? — so it only made sense for The Thin White Duke to lend himself to the role. Bowie’s Jeffries, who made a memorable cameo in Twin Peaks: Fire Walk with Me, ended up being one of the most important parts of the revival and a key figure in Lynch’s exploration of the larger Twin Peaks mythology. Bowie passed away a year and a half before the world got to see new episodes of the series, but it didn’t mean the character would be sitting out from the new batch of installments. Bowie was not able to appear in the flesh, but he did give Lynch and the producers his blessing to use Phillip Jeffries as needed in the reboot. Frankly, whether in the flesh or not, Phillip Jeffries, like the world of Twin Peaks and David Bowie himself, had always been an ethereal and elusive character just too magical for our world. –Samantha Lopez

Just six weeks after terrorists attacked New York City’s World Trade Center, Sir Paul McCartney, in an act of solidarity, held The Concert for New York City. That bill included a standout performance by David Bowie. The British rock star performed an incredibly emotional cover of the Simon & Garfunkel classic “America”, sitting with his legs crossed as he played the melody of the song on a keyboard and singing to the crowd in his signature style. While Bowie is a native of the UK, he spent much of the last two decades of his life living in between New York City and London with his family. He said, “It’s a bit like being on a holiday in a place [America] I’ve always wanted to go to that doesn’t come to an end. So ‘home’ is not quite right, is it? … I really am still a Brit, there’s no avoiding it. But I’ve got friends here.” Whether British, American, or alien from space, I like to think the world is just a little more bright and a lot more fascinating when David Bowie is around. –Samantha Lopez

Ricky Gervais’ short-lived series Extras was known for its humorous guests appearances by celebrities, and Bowie’s stint in the second episode of Season Two — “David Bowie” — was among the artist’s finest comedic turns. In it, Gervais’ character, Andy, receives negative critical reactions to his show, When the Whistle Blows; as a result, he tries to confide in Bowie, only to be taunted by Bowie via an operatic piano ode called “Little Fat Man”. Dozens of people sing along as Bowie delights in calling Andy a “clown that no one laughs at” and similarly visceral insults. It’s an amusing way for Bowie to partake in Gervais’ trademark self-mockery while also poking a bit of fun at his own iconic mystique. –Jordan Blum

Bowie has many screen credits, but one not everyone will remember is when the rock legend lent his voice to a 2007 45-minute episode of Spongebob Squarepants titled “Atlantis SquarePantis”, a musical special. The spaceman embellished his helmet and added a crown when he voiced Lord Royal Highness, the emperor of the Atlanteans of Atlantis: keeper and protector of riches, power, the arts, scientific achievement, and, well, the world’s oldest bubble. Like Bowie, his character had one blue eye. And like his earlier alter ego Ziggy Stardust, Lord Royal Highness was one freaky, colorful alien. –Samantha Lopez

Designed as a swan song and “parting gift” to fans (according to producer Tony Visconti), Bowie’s brilliantly multifaceted final album, Blackstar, was also ripe with reflections on mortality. As such, it’s as musically adventurous as it is posthumously haunting, and its second single/music video, “Lazarus”, is the best example of that. Directed by Johan Renck, it’s a self-epitaph in every possible way, merging wistful decrees — “Look up here, I’m in heaven/ I’ve got scars that can’t be seen” — with morose jazz instrumentation and distressing visuals of Bowie seemingly reaching out to the afterlife. It’s simultaneously beautiful and horrifying, and it shows him meeting death as he did everything in life: on his own terms. –Jordan Blum