Joe Biden will become the President of the United States in just six days, but he’ll begin the celebration a little early. Today, Biden has announced that he’s throwing a concert this Sunday called We the People, featuring performances from Fall Out Boy, Carole King, and Will.i.am.

In a campaign email that went out this afternoon, the Biden Inaugural Committee said the We the People concert will be an opportunity for Americans “to unite and come together, virtually, across the country” to usher in a new administration. “An experience usually reserved for people able to travel to Washington in person, this concert will be available to all supporters across the country, no matter where you are or what you can afford to donate,” it reads.

For the sake of healing a divided country, the We the People concert is wrangling a wide range of artists together. Joining the aforementioned artists will be James Taylor, Ben Harper, and AJR, all three of which will presumably perform live music too.

Fall Out Boys’ involvement is something of a full-circle story, as the band essentially wouldn’t exist without the President-Elect. As bassist Pete Wentz revealed in an Instagram post, his parents actually met while working for Senator Biden in the ’70s. “To me he is a beacon of empathy, compassion and kindness,” Wentz wrote. “The times we live in call for a leader with these specific traits. Proud to call Joe Biden my president.”

The We the People concert kicks off at 8:00 a.m. EST on January 17th. To stream the show, you can make a donation of any amount through ActBlue’s event page, and you’ll receive an email with a link to the concert. Check out the formal event poster below.

We the People is the latest in a string of star-studded celebrations leading up to Biden’s inauguration. Lady Gaga has been tapped to sing the National Anthem at the President-Elect’s swearing in on January 20th, with Jennifer Lopez also slated to perform. Later that night, a 90-minute TV special titled Celebrating America will air, featuring musical performances from Demi Lovato, Justin Timberlake, Ant Clemons, and Jon Bon Jovi, with Tom Hanks (!) hosting. 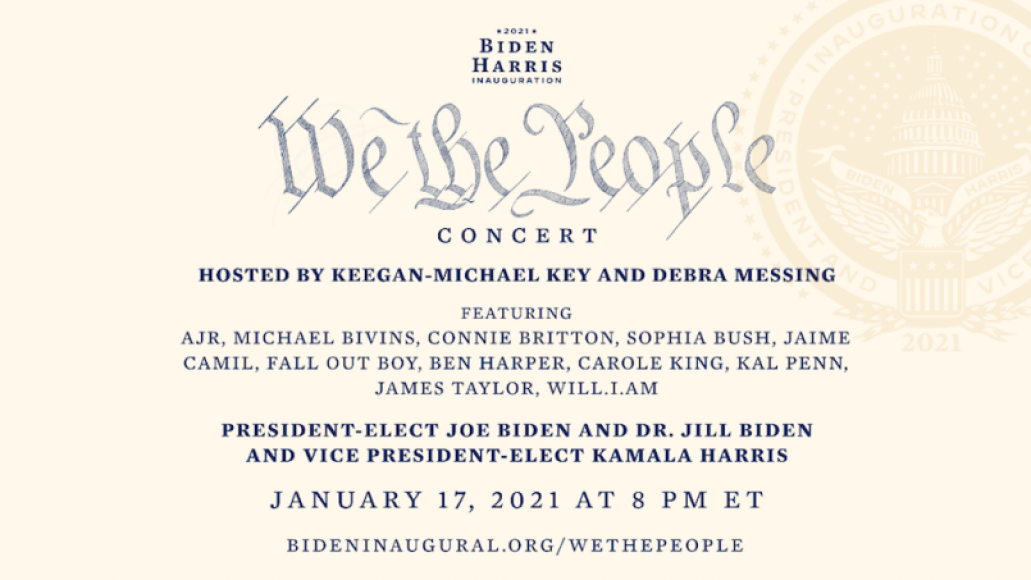