Former Two Inch Astronaut frontman Sam Woodring, aka Mister Goblin, has announced his new album Four People in an Elevator and One of Them Is the Devil. To herald its arrival on February 19th, Mister Golbin has shared the lead single “Six Flags America” featuring Sadie Dupuis.

The follow up to his 2019 solo debut Is Path Warm?, Four People… is a kind of loose concept album about right and wrong, generally, and the 2010 film Devil in particular. In a statement, Mister Goblin said it is “not an amazing movie, but I think it’s an interesting jumping off point for conversations about culpability, blame, ideas of good and evil, and just morality in general.”

The record was produced by Seth Engel and recorded at his Pallet Sound in Chicago. While ostensibly a solo project, Mister Goblin not only looped in a couple of collaborators, but empowered them to make their own decisions. “When we had the basic tracking done, I sent a couple tracks out to Matt Gatwood to add some piano and cello layering, Mike Siegel to do some standup bass, and Sadie Dupuis to add some harmonies,” he said. “Their parts were entirely their ideas.”

“Six Flags America” doesn’t have much to do with Devil. But it is sparse and sweet, with no percussion — or really any non-guitar instrumentation except for a few bars of quiet cello — and lots of Ms. Dupuis. Together, she and Mister Goblin sketch out a childhood tale of anticipation and disappointment around an aborted trip to an amusement park. “Cause I’ve got a pair of season tickets to/ Six Flags America just for me and you,” they sing. Check out the track below.

Four People in an Elevator and One of Them Is the Devil arrives February 19th via Exploding in Sound Records. Pre-orders are off and running.

Four People in an Elevator and One of Them Is the Devil Artwork: 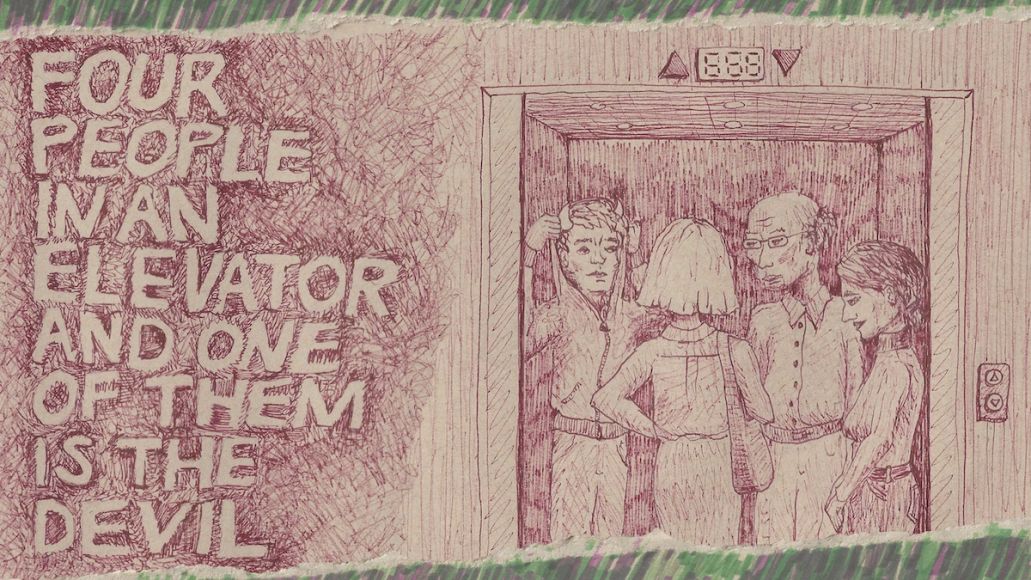