Neil Young continues to dig up treasure buried in his famed archives. The latest old material to get a new look is a 1990 concert with Crazy Horse at The Catalyst in Santa Cruz, California. The performance has now been collected on a live album and concert film, both entitled Way Down in the Rust Bucket. Audio and visual editions will be available February 26th via Reprise Records.

The November 13th show was notable for the first live performances of several songs on Young’s 1990 album Ragged Glory, as well as “Danger Bird” from 1975’s Zuma. Other live debuts included “Surfer Joe and Moe the Sleaze”, “Love to Burn”, “Farmer John”, “Over and Over”, “Fuckin’ Up”, “Mansion on the Hill”, and “Love and Only Love”. The set pushed past the three-hour mark, buoyed by ten-plus minute renditions of “Love and Only Love” and “Like a Hurricane”.

Way Down in the Rust Bucket will be available as four LPs, two CDs, a deluxe box set, and digital editions. The deluxe set contains not only a combined six vinyl and CD discs, but also a DVD directed by Young’s alter ego Bernard Shakey. The DVD boasts one additional track, a 13-minute cut of “Cowgirl in the Sand”, that’s not available anywhere else. Check out the tracklist below. Way Down in the Rust Bucket arrives February 26th and can be purchased through The Greedy Hand Store at the Neil Young Archives.

Neil Young Returns to His Hometown to Play “Comes a Time” in an Empty Theater: Watch

While many of us slowed down during the [gestures vaguely at everything], Young has been as prolific a cultural critic and archivist as ever. After a pro-Trump mob stormed the Capitol, he released a statement saying that lies and untruths are “crippling our belief system.” Besides that, he recently dropped the exhaustive Archives Vol. 2 box set, and a deluxe vinyl edition of After the Gold Rush is coming March 19th. And while the 75-year-old legend still has plenty of gas left in the tank, he’s also ready to cash in on some of his future earning potential, and recently sold 50% of the rights to his entire song catalog.

Way Down in the Rust Bucket Artwork: 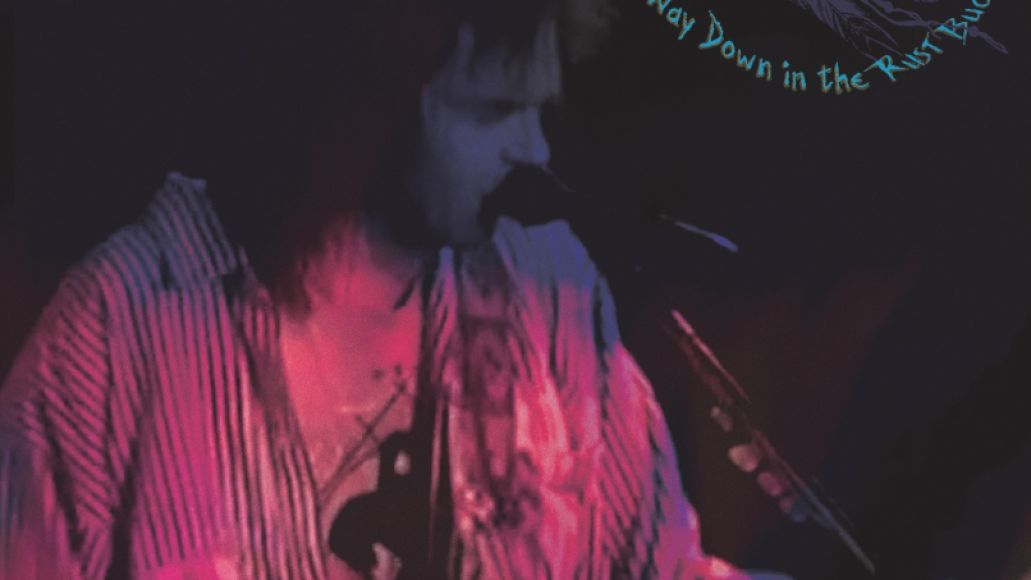 Way Down in the Rust Bucket Tracklist: