While watching Bridgerton last week, I jokingly referred to the series as “the fancy British sex show” to friends on a text thread. Although that’s perhaps reductive, the description is fairly accurate: Netflix’s new Regency-era drama is filled with sex, scandal, pearl clutching, and opulence. Yet, at the same time, it’s also a lot of fun, which is why I happened to binge most of the season in a day. (It was a welcome distraction during a stressful week.)

However, there are deeper truths underneath Bridgerton’s addictive exterior. Sure, at first blush, it’s a Regency-era romance with a Gossip Girl subplot, but the series cuts much deeper than that. At its core, Shondaland’s latest drama stealthily reveals the damaging lies and practices perpetuated by the patriarchy, particularly the struggle to conceive and the stigma of promiscuity.

That struggle mostly falls on the women of Bridgerton, who are born knowing that they have two jobs: to marry well and reproduce. In order to protect the power and property afforded to them by their family name, they must continue the biological line that holds them. Women are expected to marry a gentleman and give him babies. Men must find an approved wife to produce a recognized heir.

While many period romances stop at the wedding — or sometimes even the proposal — Bridgerton continues the narrative, showing the realities and ramifications of this limited world view. Get married and have babies, right? It sounds so simple. How magical even! Of course, the reality is anything but and there is plenty to glean from this first run. 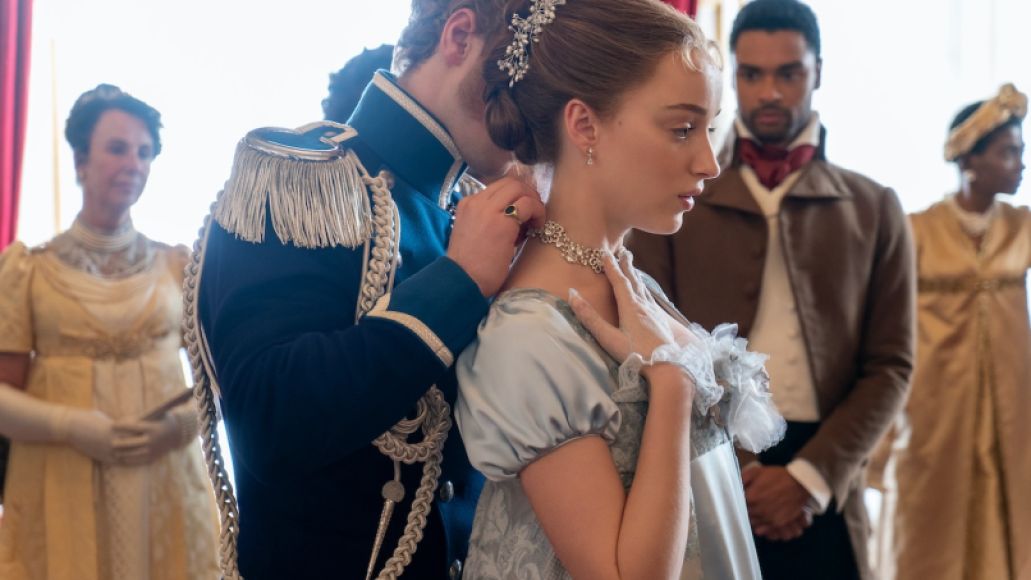 Daphne Bridgerton (Phoebe Dynevor) is the diamond of the London social season. Though her star rises and falls throughout the first few episodes, she wins the attention of a prince, and ultimately marries her true love, Simon, the Duke of Hastings (Regé-Jean Page). Before the wedding, Simon tells her that he cannot give her children. If not for a clandestine kiss that would ruin her reputation, he would not marry her at all because he knows he cannot give her what she desperately wants: a family.

Nevertheless, Daphne marries him anyway, and resigns herself to a life without children. She has fantastic sex, but soon finds her life missing purpose. Yes, she has been raised to see it as her duty to have children — furthering her husband’s family title — but she also learns that she actually wants them. After all, it’s okay to honestly want the thing that’s expected of you. The good news for Daphne is that she later learns that Simon can have children, only he’s been opting out of it.

Taking matters into her own hands, Daphne begins Trying To Conceive (something known as TTC on countless Internet chat rooms and Facebook groups). Eventually, Daphne manipulates Simon into possibly impregnating her, and now must wait to see which way her life will turn based on the arrival of her period. It’s an extremely stressful situation millions of women find themselves in every day, waiting for the first signs of blood to determine the dramatically different ways their lives will unfold. Daphne’s devastation at finally getting her period is a pain many of us can relate to. Thus, begins another cycle. 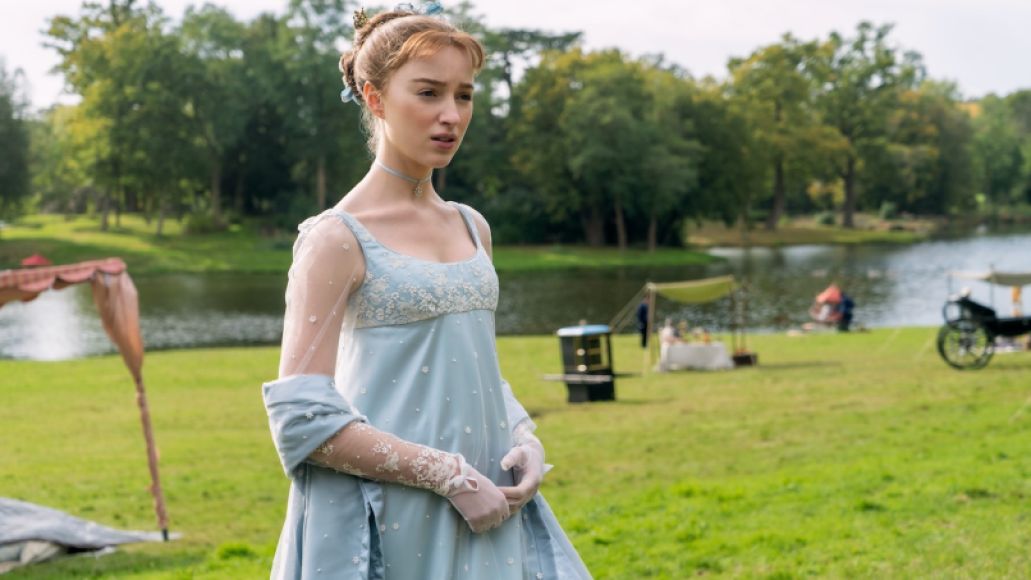 Today… Women desperate to get pregnant pore over minute medical details, trying to control the uncontrollable. Speaking candidly, I was one of these women for several years, and know well how stressful it can become. For something that’s happening inside your own body, you have remarkably little control, and because women’s health is not valued nearly as highly as men’s (that patriarchy again), there is hardly enough scientific information surrounding conception.

We’ve been told that having children is a natural gift of womanhood, something our bodies were designed to do. So, when we don’t conceive, when the month goes by, and we must buy more tampons instead of baby clothes, it’s hard not to feel like a failure with no way of knowing what “went wrong.” Similar to miscarriages, the struggle to conceive carries immense shame and so many of us suffer alone. Like Daphne, I’ve anxiously awaited the definitive arrival of a period, only to feel the heartbreaking telltale cramps. In that moment, her sorrow was mine, and it’s an honest depiction that’s relatable and cathartic. 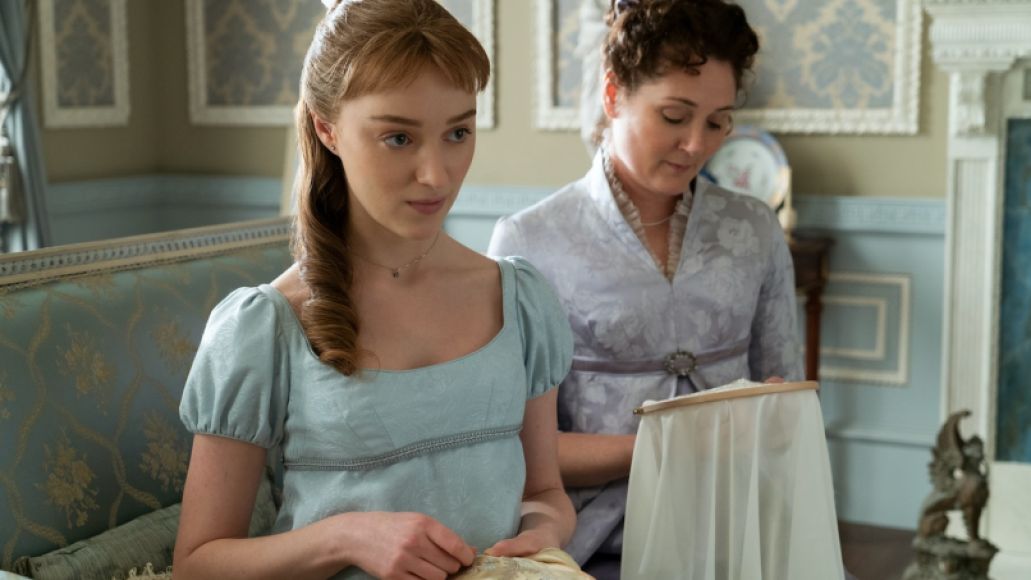 The ladies of London society have been taught that since birth it is their destiny to land a man to give him babies, and they enter the social season well prepared for the former. They learn the proper way to cast their gaze down, then look up at a potential suitor through decorated eyelashes. They learn a skill, often musical, to make them an interesting ornament. They’re taught the right way to stand, sit, walk, curtsey, and even swoon, all for the goal of making it to the marriage bed. Once there, they enter it with virtually no information about sex and conception. This thing they were bred to do is a complete mystery, deemed too shameful to discuss in polite company. Months after her marriage, Daphne has no idea how babies are made, and her younger sister and friends show shocking naivety at how a lady becomes “with child”.

By calling out this fallacy, Bridgerton demonstrates how ridiculous this sexual repression is. Unmarried women are deemed too fragile to know anything about intercourse, but the second they’re married, they’re expected to understand the details of pleasure and conception. Mothers, who have been through it themselves, fail to prepare their daughters for the life awaiting them. If new brides are lucky, they will marry a kind man who will guide them through this discovery, however the focus on pedigree and breeding leads many suitors to look at their brides as chattel to be objectified and negotiated for by their male relatives. I shudder to think of the “education” many will receive on their first night as a wife. 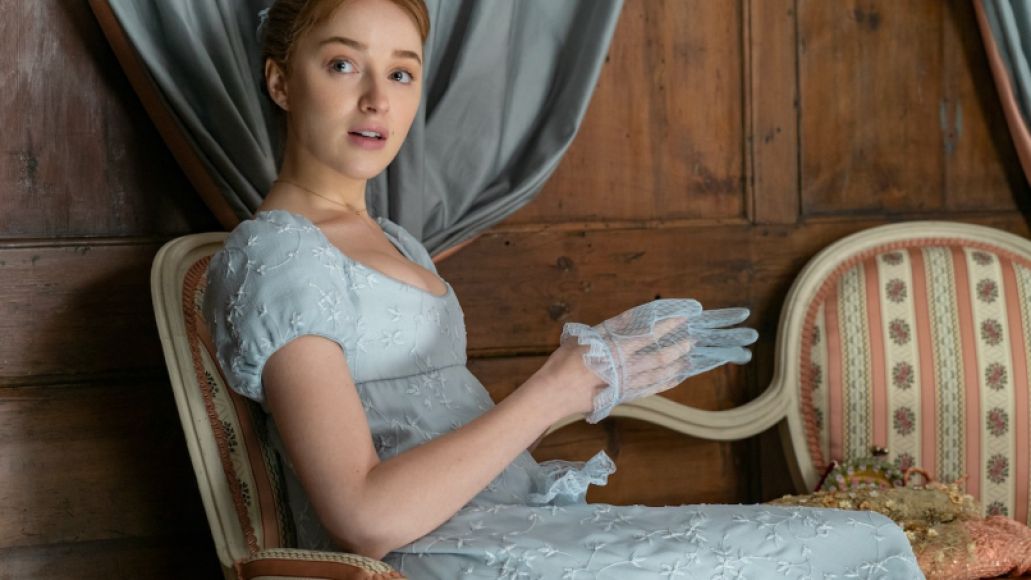 Today… Young people all over the country are still taught abstinence over sex education based on the reductive thought that the more teenagers know about sex the more they’ll want to do it. In reality, arming young men and women with accurate information about their bodies gives them information to make smart choices and ultimately protect themselves. As 90210’s Donna Martin put it when arguing for sex education in 1992, “If you know that they’re going to find a way into that water, don’t you think you ought to teach those kids how to swim?” Years later, we’re still making the same mistakes, and our children are paying the price. 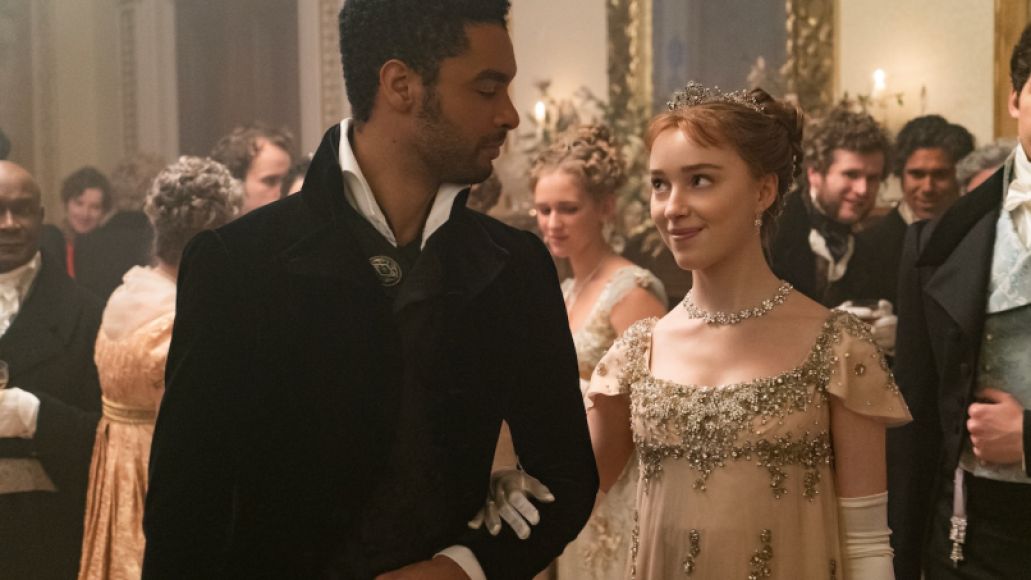 What’s more, Simon also takes responsibility for his own birth control. He is the one who does not want to have children, and he makes sure the one thing that will cause pregnancy —  his careless ejaculation — does not occur. Except for that one time, he makes sure to withdraw, denying himself pleasure because he knows what the consequences will be for his partner. Granted, his method of pulling out is notoriously unreliable (wear a condom!), but he does not shift the burden of controlling his own orgasm to her. This responsibility gives him the freedom to not only enjoy sex, but to ensure that his partner does too. 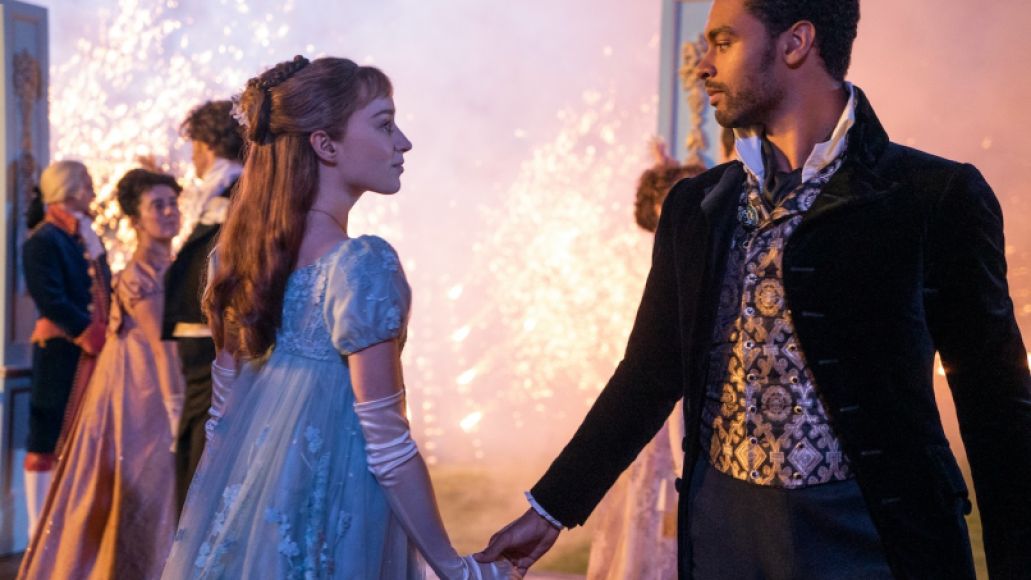 Today… It’s refreshing to see a man so concerned with his partner’s experience, and though it’s set centuries ago, Simon’s attitude feels progressive. When sex education does exist, it’s mostly focused on teaching women to defend their bodies against pregnancy rather than teaching young men about their own responsibilities.

It’s a consequence of rape-culture, where men’s desires are viewed as natural and uncontrollable (boys will be boys, right?), while young women carry the sole burden of defending themselves against their advances. Their desires do not matter because they are the facilitators of pleasure, not deserving of pleasure themselves.

Simon understands that the sole cause of pregnancy is ejaculation, and that he is the one ultimately responsible for it. How many unwanted pregnancies could be prevented if more young men understood this simple concept? 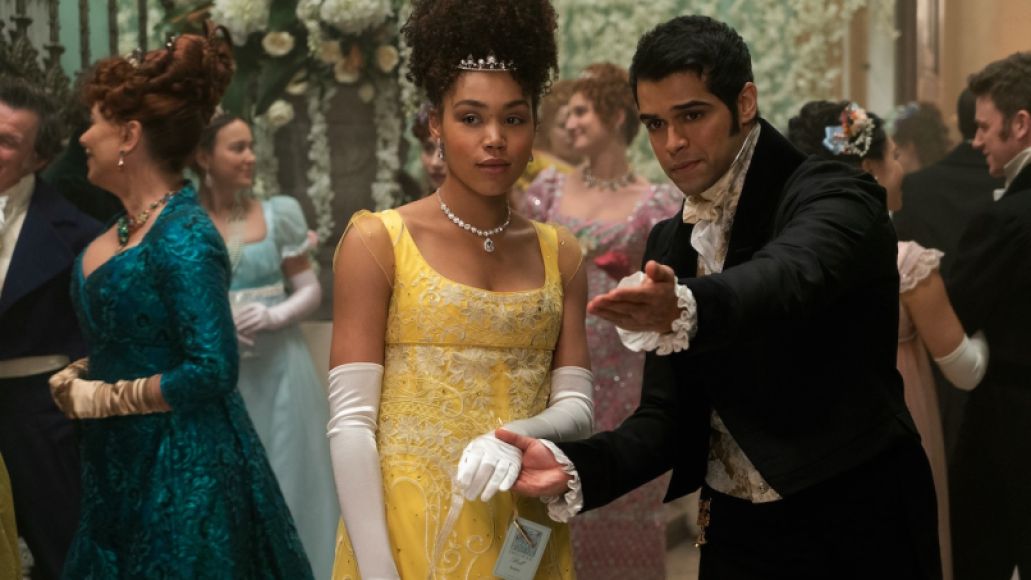 In Bridgerton’s most shockingly relevant plot line, Marina Thompson (Ruby Barker) enters the social season already with child. She tries to conceal this from the family she’s staying with because she knows it will ruin any chances of finding the husband she’s told she must secure. She is “damaged goods,” and if her secret gets out, no man will want anything to do with her. She attempts to trick a suitor into marrying her quickly, planning to tell him the child is his to avoid shame and to ensure a safe life for herself and her baby.

Marina is painted as the villain, and once her scheme is exposed, she’s shunned. But it’s hard not to empathize with her situation. If she is not able to find a man to validate her pregnancy, she will have to give up her entire life. Rather than receiving support from her extravagantly rich friends and family, she will be turned out on the street with nothing, expected to care for herself and her child with no resources or support. Marina’s entire life could hang on taking that chance and it’s easy to understand her deception. Also understandable is her choice to end her pregnancy, given the myriad no-win situations she faces. She drinks a tea intended to cause a miscarriage, and though it is unsuccessful, the attempt nearly kills her. 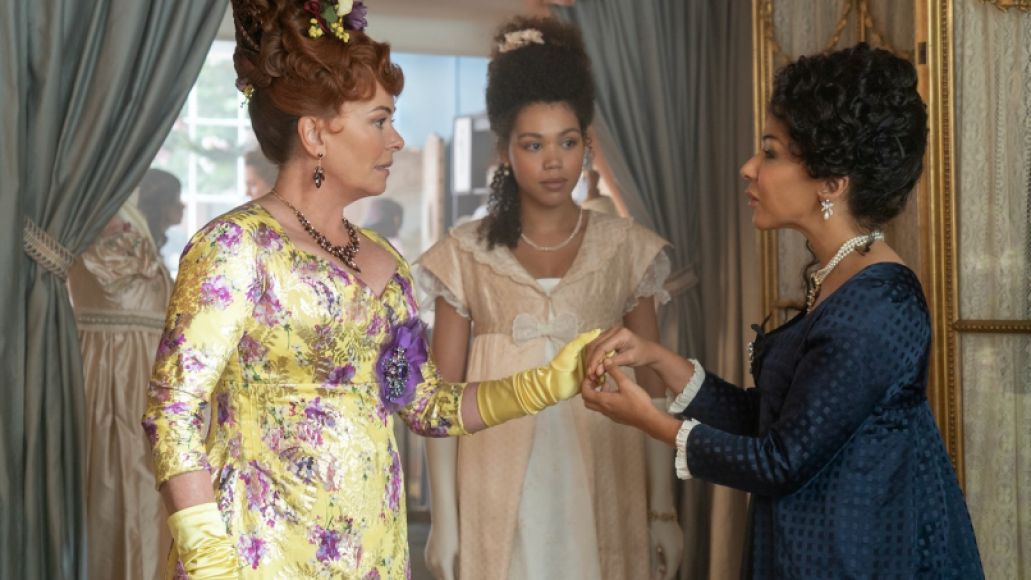 Today… This is a brutal reality many pregnant women find themselves in right now. Though abortion is legal, depending on location, women must navigate seemingly insurmountable obstacles to actually receive a safe one within the allowed window. The issue is complicated, but what shouldn’t be up for debate is the fact that abortion is health care.

Having a child is difficult, even under the best of circumstances, and young women who become unexpectedly pregnant often face heartbreaking choices. If we actually want to prevent abortion, we need to provide access to prenatal care, paid family leave, and sex education. We need to give young women the tools to prevent unwanted pregnancies, while also teaching young men that it’s their responsibility too.

Otherwise, we’ll continue to have more and more women like Marina, who put their lives at risk to avoid having them turned upside down by a baby. 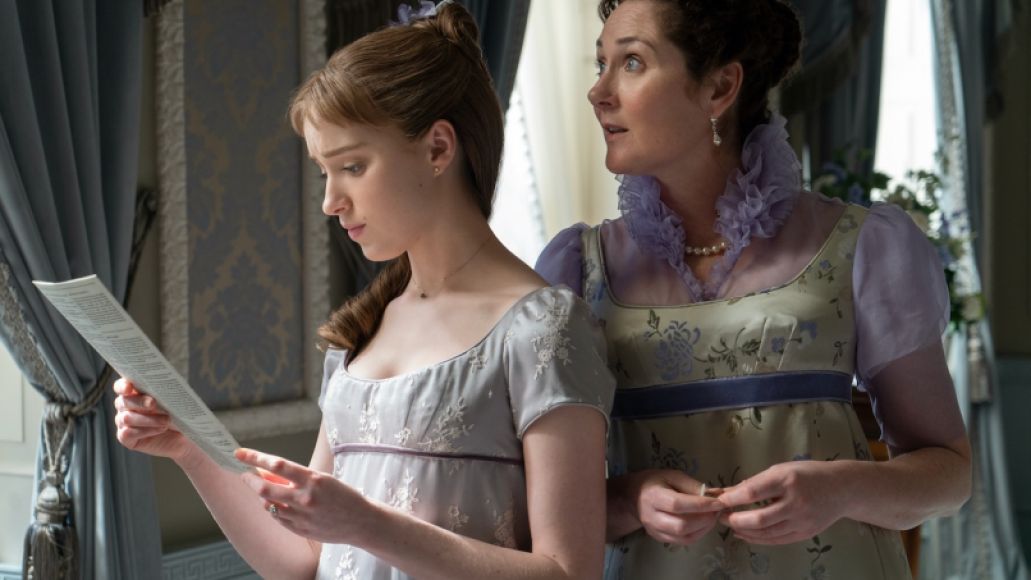 A recent Twitter kerfuffle debated the necessity of sex scenes, arguing that they don’t further the plot. While I will admit that a lot of these scenes are unnecessary (and many objectify women in damaging ways), Bridgerton is a prime example of sex scenes that don’t just advance the plot, but are its very essence. Not only are they enjoyable to watch (read: hot), but these scenes are crucial in helping young people understand what their bodies are capable of and how to use them responsibly.

More than a Regency-era Gossip Girl, Bridgerton sheds light on the toxic shame associated with sex — mostly put on women — and sparks a conversation long overdue. Though we are currently in the fourth wave of feminism, it often seems as if we have made very little progress in the 200 years since the fictitious events of Bridgerton. Many of these issues, oft-considered women’s problems, have long been kept in the shadows, whispered about in female circles, or suffered alone.

The depressing reality is that it takes a show set in Regency London to bring awareness to damaging ideas and practices still rampant today. For far too long, the patriarchy has insisted that women are valuable only for their ability to please men and continue family lines. Yet Bridgerton’s most empowering truth is that its heroines have value far beyond procreation, and that once we reject the rigid rules designed to maintain this cruel system, love and pleasure can be ours for the taking.