Editor’s Note: Today, we continue our celebration of the life and art of David Bowie with On Location, a recurring series that brings to life the places you know from songs, album covers, and music history. Keep checking back all weekend for more new and reshared content reflecting on our favorite Starman. And, if you’ve missed anything, you can experience it all again here.

While this week marks the five-year anniversary of David Bowie’s passing, it goes without saying that his indelible legacy makes his presence everlasting. Forever fueling his musicianship with innovation, Bowie left behind a tapestry of work that boasted colorful characters, imaginative lyrics, and an intoxicating nexus of fantasy and reality. In short, he was a visionary in every sense of the word. In addition to a visionary, though, he was also a Londoner. Though his magnitude reached a global level, London was where Bowie was born, raised, and experienced many of his career milestones.

10 Famous Beatles Locations You Can Visit

Throughout his career, Bowie played many roles — Ziggy Stardust, Aladdin Sane, The Thin White Duke, and more. Together, they culminated in the greatest role of all: the role his music has and will continue to play in the lives of his listeners. David Bowie’s work has woven its way into the fabric of our worlds, and now, here’s how you can step inside his.

Click ahead to discover several legendary Bowie places you can visit… 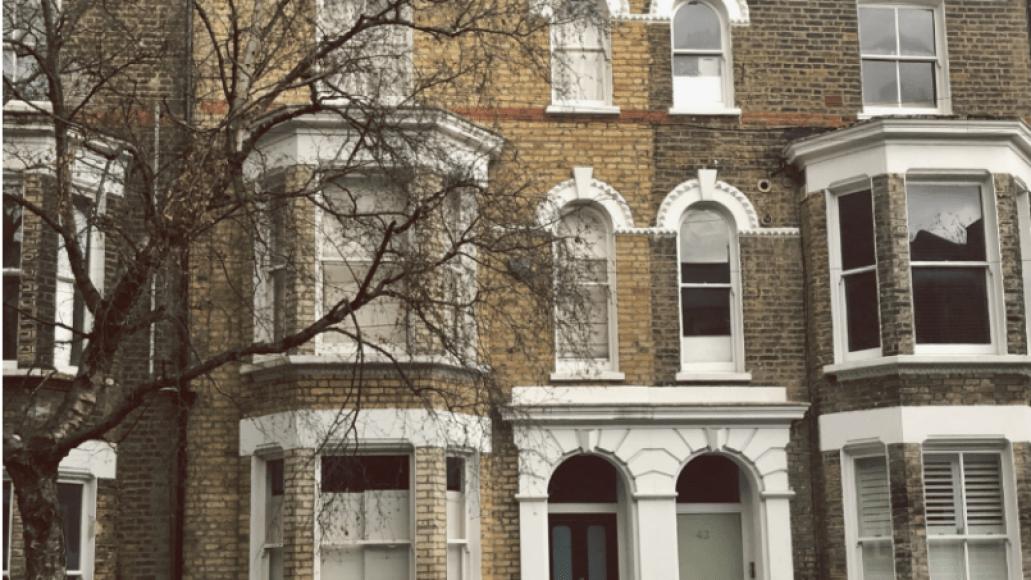 Let’s start off exactly where Bowie himself did: 40 Stansfield Road, the address of the Brixton home where he was born and lived in during his early childhood. The residence often flies under the radar of Bowie fans who make their way to the area to take in the famed mural of his Aladdin Sane persona, and its understated nature is precisely what makes visiting it so special. The home has been left largely untouched by any sort of commemorative fanfare, which allows for visitors passing by to experience it just how Bowie did — as a house on a quiet street where an incredible journey began.

Helpful Hint: In addition to being about a 10-minute walk away from the mural, the home is also just around the corner from Stockwell Primary School, which Bowie attended. 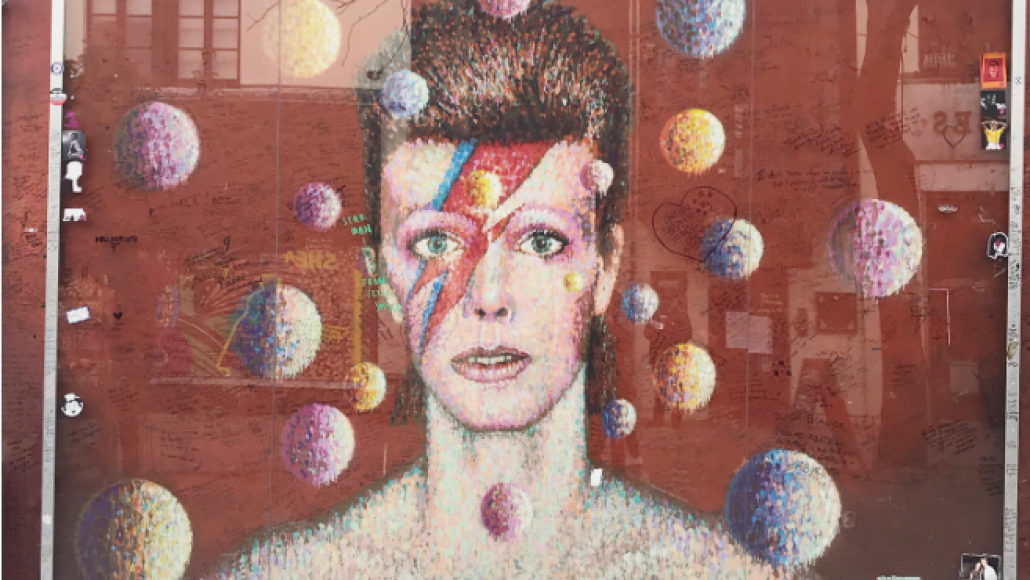 As far as David Bowie-related locales in Brixton go, the mural is the crown jewel. Painted by artist James “Jimmy C” Cochran in 2013, the work honors Bowie’s ties to the community and later took on the role of a memorial site. Since its creation, the mural has served as a place of togetherness and connection for those whose lives have been touched by David Bowie. Flowers, photos, and handwritten messages are often left on site by visitors, allowing the raw bond that Bowie’s work has had with so many to be viewed in physical form. Taking that all in for yourself can be incredibly moving, and that’s why visiting the mural is such a novel experience.

Cost to Visit: Free excluding cost of transportation (see above)

Helpful Hint: You won’t have to look hard to find the mural. If you’re coming from Brixton station, all you need to do is cross the street directly in front of it, and it’ll be on your left. 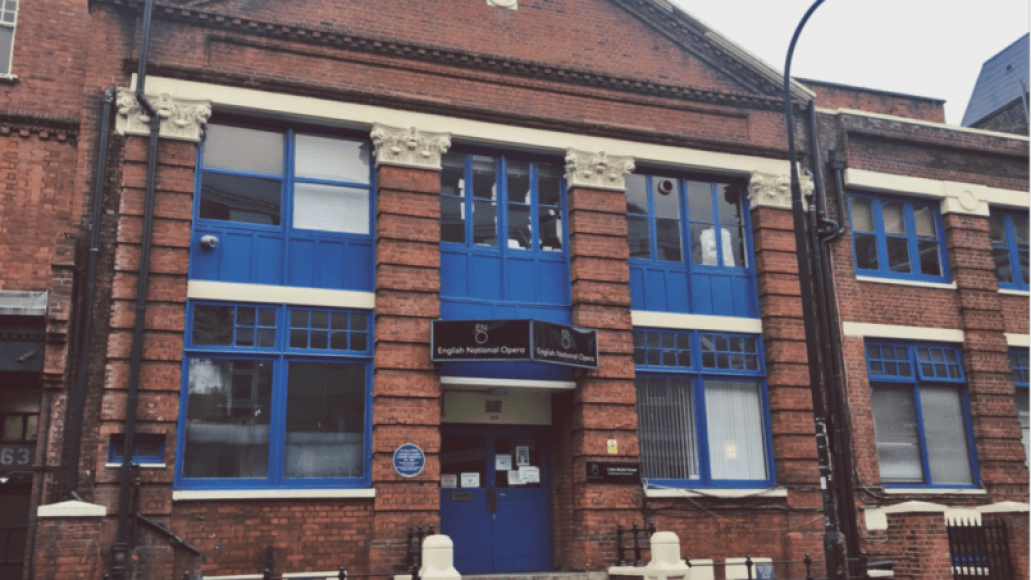 After seeing where David Bowie began his life, you can then hop on the tube and see where he began his career. One of those major early milestones took place at the West Hampstead building that used to house Decca Studios, which is where Bowie recorded his self-titled debut album. While the facility is now home to the English National Opera, you can still walk the same streets that Bowie did on his way to create one of his first recordings — something that played a role in catalyzing the legendary career we know him for today.

Helpful Hint: As long as you’re in West Hampstead, it’s worth making the short trip over to Hampstead Heath, which is arguably one of London’s best outdoor spaces. A far cry from the manicured parks that pepper the central part of the city, Hampstead Heath is packed with ponds (even ones you can swim in), gorgeous natural terrain, a café, a playground for those who may be traveling with children, and so much more to the point where it feels like a world of its own. Most notably, thanks to its hilly nature, Hampstead Heath offers one of the best views of London’s skyline. A word to the wise: Hamstead Heath can be chronically muddy, so be sure to arrive in comfortable shoes that you won’t mind rinsing off at the end of the day. You may return scuzzy and with burning quads, but it’s so worth it. 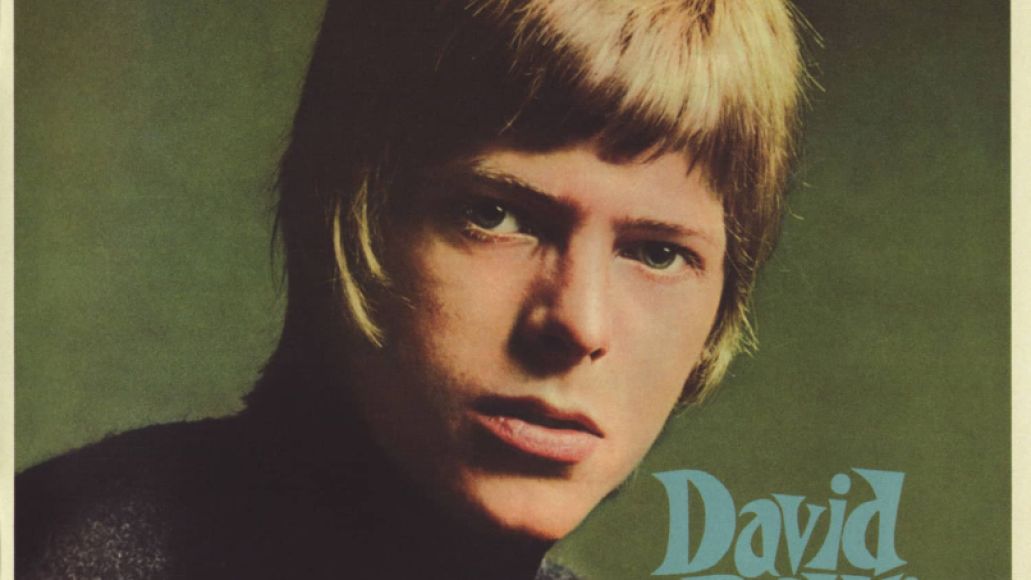 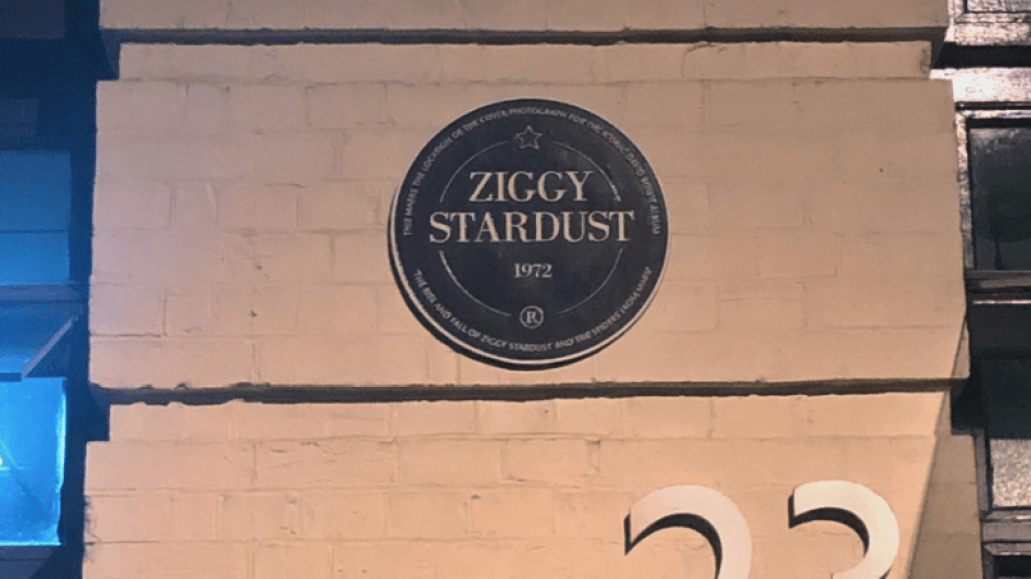 Tucked away in a blink-and-you-miss-it offshoot between where Piccadilly and Oxford Circus bleed into each other, 23 Heddon Street marks the exact spot where Bowie stood while being photographed for the album cover of The Rise and Fall of Ziggy Stardust and the Spiders from Mars. With a plaque to mark the spot to ensure that visitors don’t miss it, anyone can step inside what is arguably one of the most iconic album covers of all time.

Helpful Hint: If you want to continue to ride the Bowie wave during your time on Heddon Street and could use a pick-me-up, you can head around the corner to the appropriately named Ziggy Green restaurant. 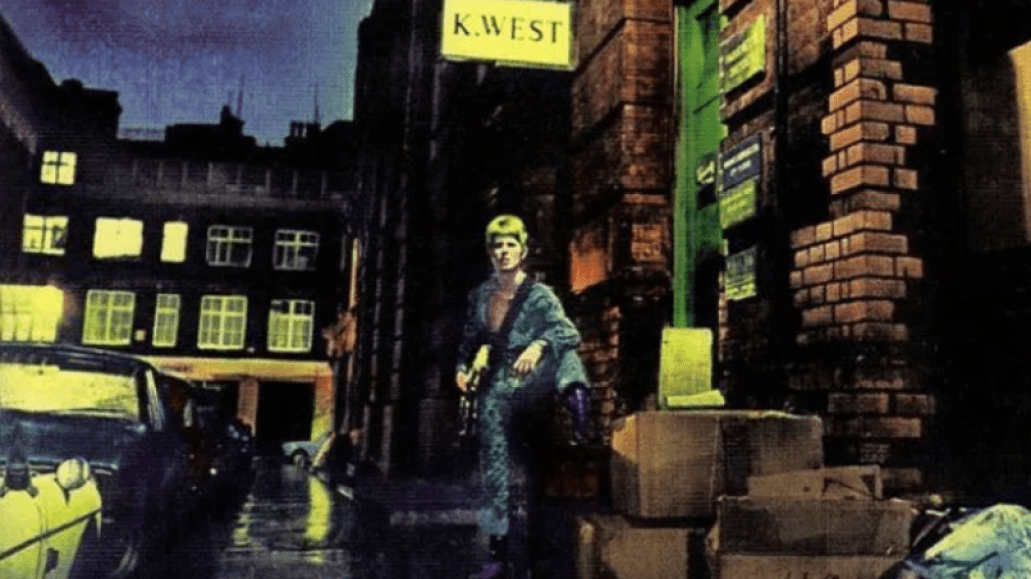 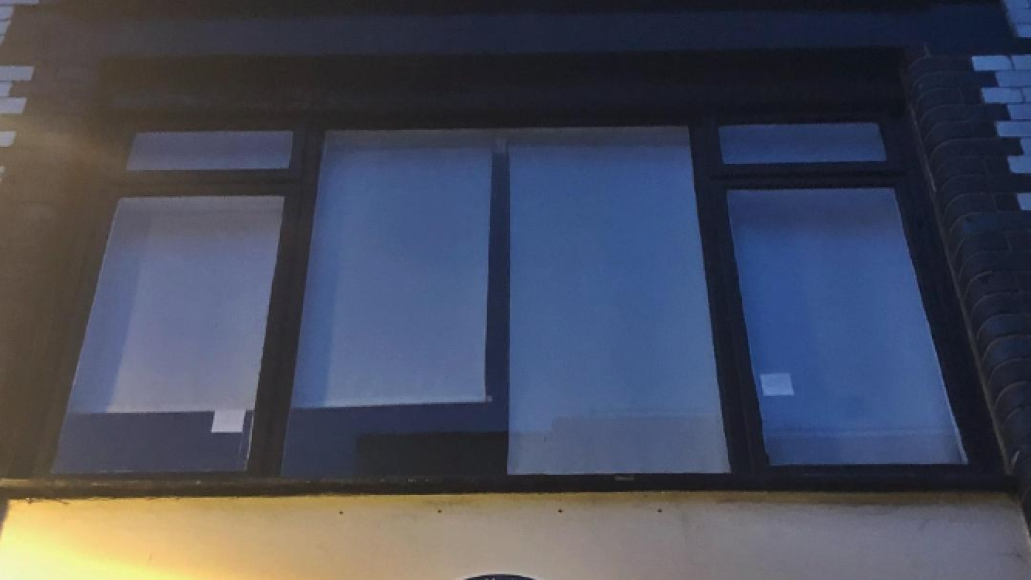 Trident Studios served as the setting where the origin stories for some of David Bowie’s most celebrated work began. There, he recorded The Rise and Fall of Ziggy Stardust and the Spiders from Mars, Hunky Dory, and “Space Oddity”. While Trident has since moved to another location in London, the studio’s signature logo and a plaque to commemorate the work Bowie brought to life there still stand as permanent, physical reminders of the caliber of history that its original location was home to.

Helpful Hint: The original Trident Studios location is within comfortable walking distance from 23 Heddon street, allowing you to fully immerse yourself in the world that built Ziggy Stardust all within a short amount of time. 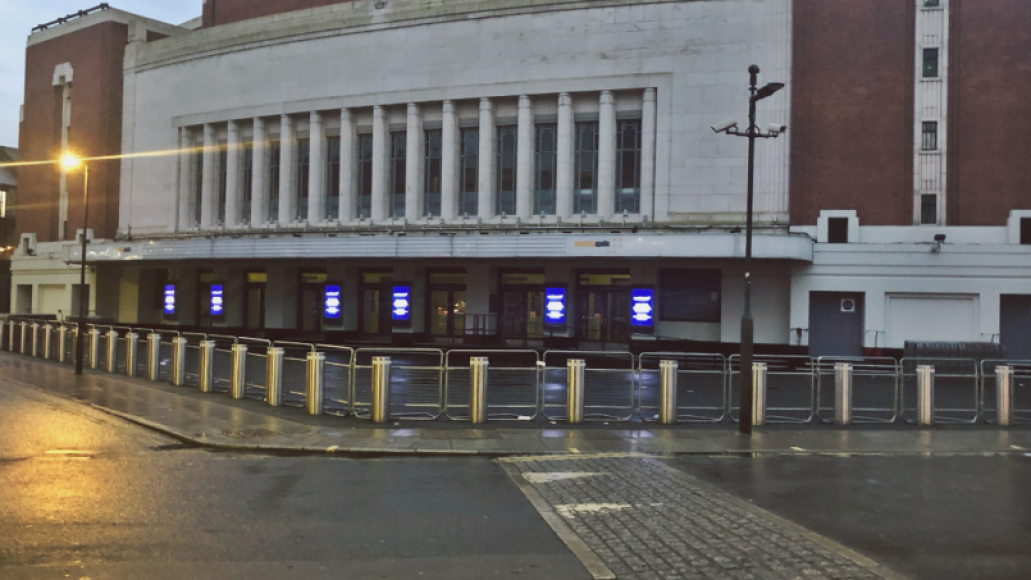 Most commonly known as the Hammersmith Odeon, its original name, the west London music venue is where David Bowie famously retired the persona of Ziggy Stardust after what had been nearly a full year of touring. With ever the flair for the unconventional, Bowie made the ominous announcement that the gig was “the last show we’ll ever do,” shocking the audience (and reportedly even some of his bandmates) and fueling concerns of a permanent retirement. Thankfully, that wasn’t the case, but the manner in which Bowie retired Ziggy Stardust — a character that had already become deeply beloved by that stage in this career — served as a microcosm of what made his music so magnetic: the embrace of spontaneity and atypicality. Should you wish to travel back in time to the evening of the gig (honestly, who wouldn’t?), the set was captured on film in the concert documentary Ziggy Stardust and the Spiders from Mars.

Cost to Visit: Free excluding cost of transportation and any event tickets purchased

Helpful Hint: The venue is listed online as the Eventim Apollo, its technical new name, so if you’re looking to snag tickets for something (and here’s to hoping we’ll all be in a position to do that sooner than later), that’s what you’ll want to type into your search engine. However, signs around the area and the Maps app still list it as Hammersmith Apollo. The revolving door of changing names could be confusing, but rest assured that they all refer to the same place. 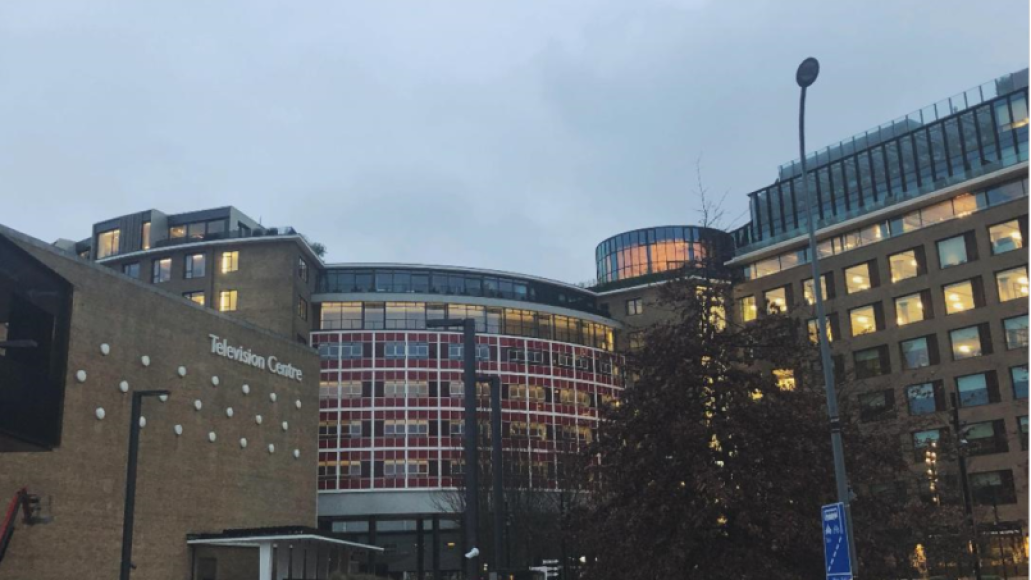 The west London studio complex is home to where David Bowie delivered his historic Top of the Pops performance of “Starman” in the summer of 1972. While many celebrated artists graced the Top of the Pops studio in its heyday, Bowie’s performance of “Starman” was bone-chilling in the best way. The consistency with which he breaks the fourth wall by stealing coy glances into the camera makes viewers feel both seen and personally involved, almost as if Bowie is the quintessential cool older kid in school who’s letting you into their world. It’s a performance where it feels like Bowie and his band have leapt out of your screen and are performing for just you in real time. The fact that he was able to make a broadcast that would ultimately be seen by millions feel like such a moment of personal, unbridled connection is a hallmark of the magnetism he possessed as an artist. David Bowie was magical, mysterious, warmly familiar, and as a result, the world’s own shared treasure. His performance of “Starman”, which was given relatively early on in his career, was a moment where all of these elements were not only wonderfully represented, but left little room for doubt that Bowie would continue to deliver great work to come.

Cost to Visit: Ordinarily, the public is able to visit the Television Centre through booking tickets to attend a tour or a taping through the ITV Daytime Studios Tour or the BBC’s “Shows, Tours, & Take Part” page. However, because tickets currently aren’t being sold at the moment, their prices are unlisted. In the meantime, you can still visit from the outside for free.

Helpful Hint: The Television Centre and the Hammersmith Apollo are close to each other, making it possible to visit both within the same day.