The Pitch: Superpowered lovebirds Wanda Maximoff (Elizabeth Olsen) and Vision (Paul Bettany) are the newlywed couple in town and attempt to hide their extraordinary abilities from their unassuming neighbors, getting into all sorts of comedic mischief along the way. But as Wanda and Vision work their way through the decades, the duo begin to realize that not everything in their reality is as it seems.

Expect the Unexpected: Though originally it would’ve reached audiences after a year’s worth of other Marvel movies, WandaVision has found itself in the strange position of being the first piece of MCU-related content not only in 2021, but the first project since Spider-Man: Far from Home back in 2019. For some fans, a year without Marvel was a long and torturous one, building up quite a bit of anticipation for a show that, had it not been for coronavirus, likely would’ve had a lot less riding on it instead being nestled between other major films.

However, while WandaVIsion wasn’t originally planned to be fans’ first taste of the MCU in over a year, it might be a good thing that it is. Because the series is such a drastic departure from anything that the MCU has ever attempted, it feels like a new era of the universe entirely. Set at an unspecified point in the MCU’s chronology, WandaVision’s first three episodes bear little to no connection (barring a few vintage commercials showcasing some exciting new products with familiar names) to the rest of the wider universe in which it takes place.

If you’re going into WandaVision expecting another typical entry in the MCU canon (or, perhaps, a movie broken into several episode-length pieces), get ready for your entire world to be tilted on its axis because the series premiere is an honest-to-goodness 1950s-style black-and-white sitcom. 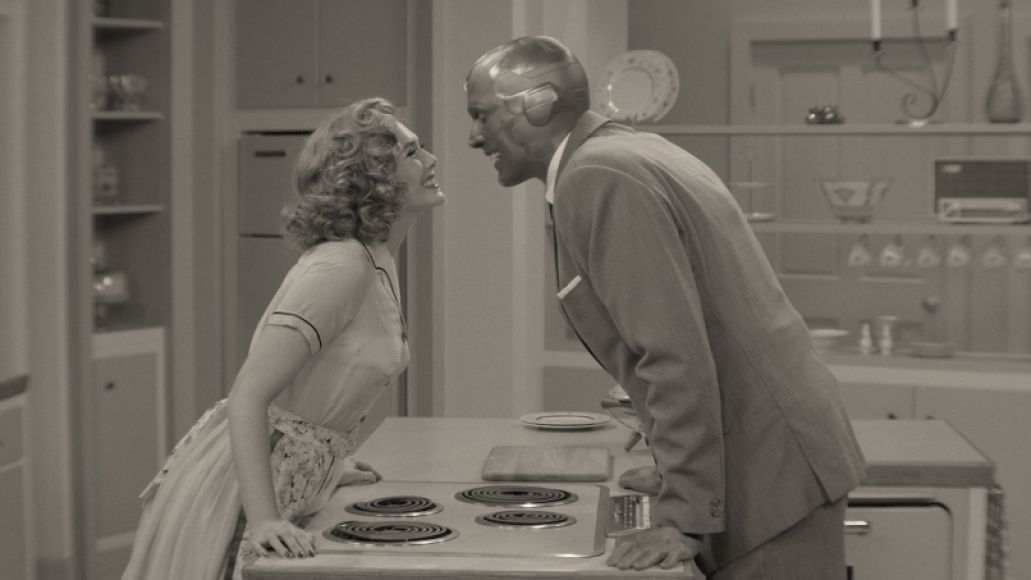 Playing House: That’s right, WandaVision is an I Love Lucy-style sitcom, filmed in front of a live audience and shot with a 1.33 aspect ratio, that not once lets the other shoe drop. The first episode finds Wanda and Vision attempting to impress Vision’s boss when he and his wife come to dinner — and everything from the shot composition to the way the jokes are structured to the pitch-perfect music queues bleeds the ‘50s.

There’s a certain point in the episode where you’ll stop and think to yourself, “Oh, this is really how it’s going to go?” But once you’ve accepted that WandaVision isn’t taking the conventional MCU route, it’s incredibly easy to sit back and lavish in the easy, nostalgic comedy that the show presents, always tinged with a sinister hint of mystery.

It’s jarring for those that expect typical MCU fare, but WandaVision is clearly (and commendably) content that is taking its time to develop a sense of self and a distinct tone/style. Unlike some other recent Disney properties (looking at you, The Mandalorian), WandaVision doesn’t feel the need to cameo beloved MCU characters or make constant references to the extended universe. Instead, it plays things straight — existing almost entirely as a self-aware sitcom hopping through the ages — and only pulls back the curtain just enough to make you uneasy about what’s really going on. 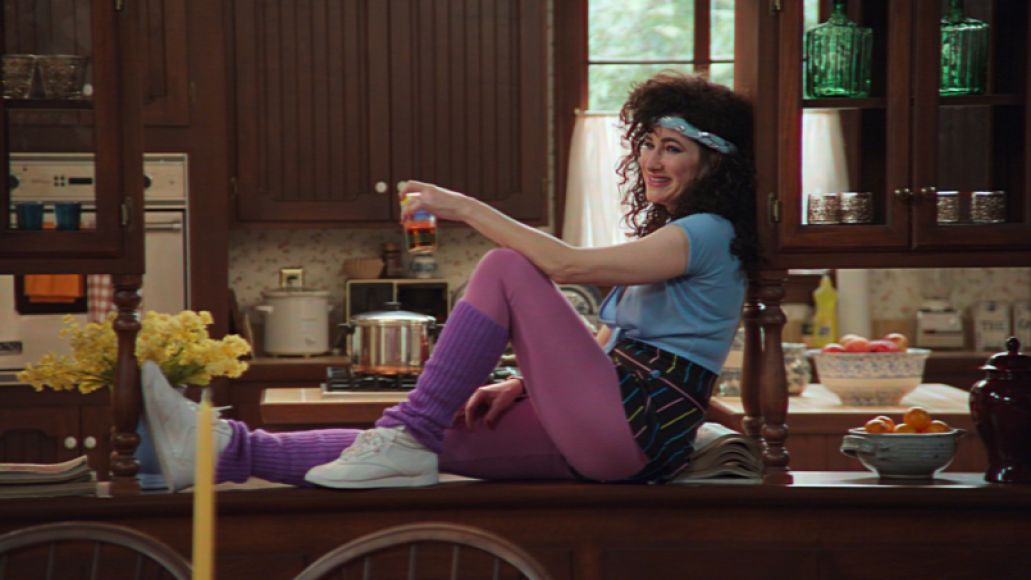 As Time Goes By: One of the most immediately dazzling features of WandaVision is the show’s commitment to honoring (and often paying homage/borderline parodying) classic American television sitcoms. Each episode moves from one decade to the next, bringing out protagonists forward in time and changing their surroundings with them. Everything from the set decoration to the costumes to the hair and makeup is tailored perfectly to the style of show they’re parodying — whether it’s The Honeymooners in the 1950s, I Dream of Jeannie in the 1960s, or All in the Family in the 1970s.

Decadent, nostalgic, but always pitch-perfect to the period, the level of love and care that clearly went into mimicking classic American sitcoms speaks to a deep love for and understanding of what made the original shows so great — but also makes the moments when things go off the rails all that much more impactful. WandaVision cleverly lulls its audience into falling into the rhythm of the kind of old-Hollywood sitcom we all know and love, and then just when you’re getting a little too comfortable, just when you’ve forgotten that yes, you are watching a piece of the MCU, it yanks the rug out from under you.

Some may find WandaVision’s commitment to being an honest-to-god vintage sitcom frustrating, especially if you’re looking for high-octane action or deep cuts in lore, but the forcefulness with which the show adheres to the formula makes it all the more impactful when the illusion shatters. At times, WandaVision almost feels like the superpowered version of The Truman Show: there are a few moments where Wanda stops and re-starts scenes with her mind because they aren’t playing out the way she wants them to. But, of course, when you think you’re finally getting a taste of what’s really going on beneath the surface, things snap back into place, and the sitcom continues once more. 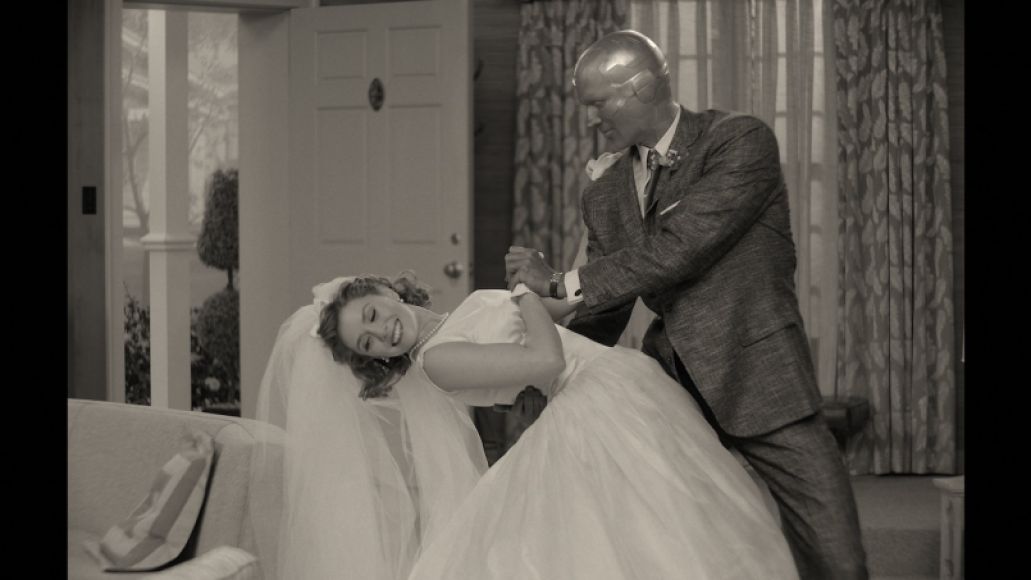 Happy Wife, Happy Life: The show’s commitment to being a “sitcom through the ages” isn’t just an interesting aesthetic choice; it also allows for Elizabeth Olsen and Paul Bettany to flex the kind of comedic muscles we haven’t truly seen from them in the MCU before. Because the first three episodes so rarely pull back the curtain on the reality in which Wanda and Vision are living, that leaves Olsen and Bettany as our two comedic leads, channeling classic small-screen stars like Audrey Meadows or John Astin with pitch-perfect comedic timing.

At first, Olsen’s borderline transatlantic accent feels a little hokey (if not true to the period) but eventually the falseness of it fades away, and what’s left is a performance so true to what it’s emulating that you could be fooled that WandaVision is actually a sitcom from the 1950s. Olsen makes for the perfect housewife: the cadence of her voice, the saccharine sweetness of her smile, all just what you’d imagine a leading lady of the era to be like. Just as the show lulls audiences into a false sense of security, though, so does Olsen’s performance, because every now and again, before she can reset things to how she likes, Wanda’s mask drops and there’s a heartbreaking confusion and terror that feels like a punch to the gut. 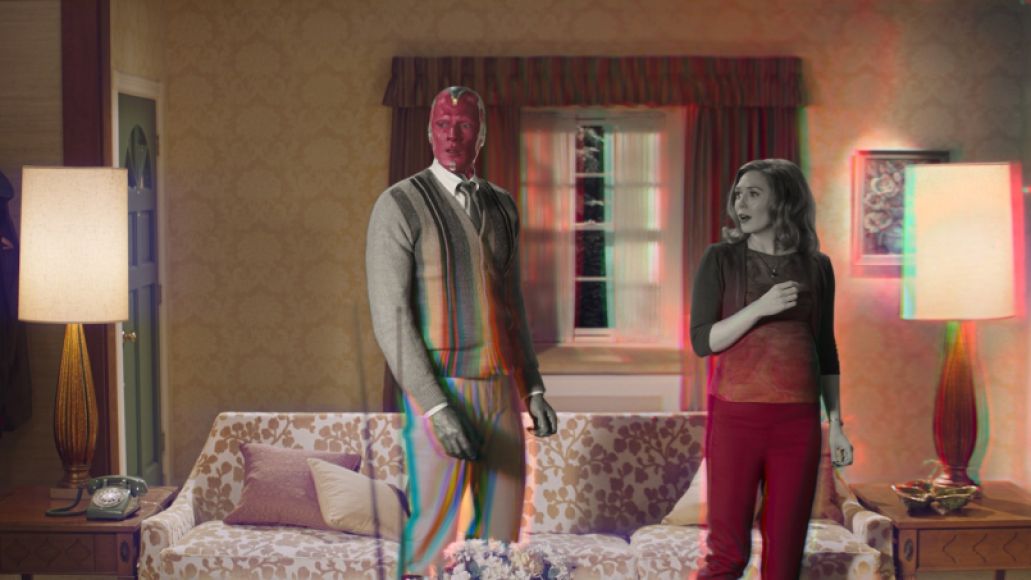 Her lovely other half is just as strong, if a little more comedically than dramatically inclined. Bettany is, somewhat surprisingly, a natural-born comedian, and to see his comedic style adjust ever-so-slightly as the show progresses through the decades is fascinating. He, too, has some moments of clarity where Vision begins to realize something is off, but they aren’t as significant as Wanda’s, and Bettany is at his best when he’s playing for laughs.

The last piece of the Pleasantville puzzle that makes WandaVision’s picture of false suburbia so mesmerizing is its ensemble cast. Just as Wanda and Vision change with the decades, so too do their neighbors, played by Kathryn Hahn, Emma Caulfield, and Teyonah Parris. Hahn and Caulfield fit the archetypal nosy-neighbors to a “T”, so much so that their characters induce a sort of a paranoia (Are they in on it?). Do they know what’s going on? But it’s Parris’ friendly Geraldine who turns out to be the key, because Episode 3 ends with her namedropping Wanda’s dearly departed brother Pietro, an act which gets her thrown into what is (seemingly) the real world. 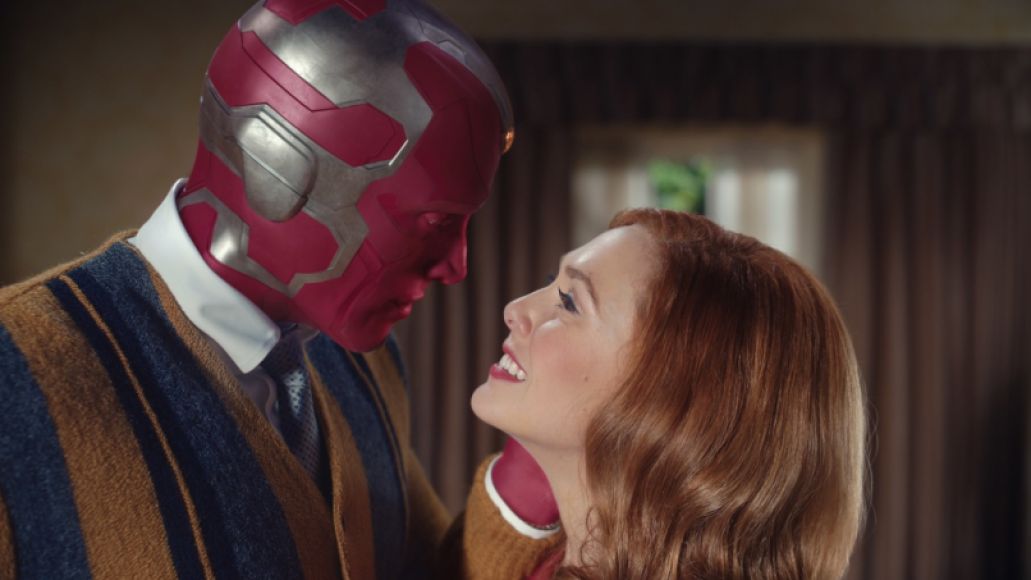 The Verdict: Though the show’s first three episodes don’t make a ton of headway in terms of plot development, WandaVision is so dedicated to being its own bizarre entity that it’s difficult to be upset that nothing Marvel-y is going down. Wandavison merges the disorienting and the mundane so effortlessly that the result is a show where every character is a possible source of suspicion, and the impending dread of Wanda’s idealistic reality shattering around her propels audiences from decade to decade in anticipation. Unabashed, off-kilter, and unlike anything Marvel has ever attempted, WandaVision is a reality-warping joy that promises a new beginning of the MCU.

Where’s It Streaming? Make yourself a TV dinner and tune into WandaVision when the first two episodes drop Friday, January 15th on Disney+.