This month marks the 25th anniversary of one of the most celebrated hip-hop records of all time: Fugees’ classic The Score. In celebration of the silver jubilee, we’re exploring the album’s legacy on the upcoming season of The Opus podcast. Ahead of the latest entry of the series from Consequence Podcast Network and Sony, we’re giving you the chance to win an exclusive Fugees prize pack, which includes exclusive vinyl, turntable, and headphones. After reading this classic review of The Score, be sure to enter here for a chance to win!

As rap music continues to dominate charts and set cultural trends when it comes to fashion, art, and how we use language, it is imperative to remember that its most powerful purpose has always been storytelling. From The Sugarhill Gang and Grandmaster Flash and the Furious Five to N.W.A and Public Enemy, evocative messaging has always been central when it comes to the role of lyrics in hip-hop. When considering classic hip-hop albums that helped define the genre while embracing this creative aspect of storytelling, Fugees’ The Score sits right at the top of that list.

Part of its lasting impact stems from the trio of Wyclef Jean, Lauryn Hill, and Pras Michel having released their classic sophomore effort in a year where the fabric of Black music was palpably changing. In 1996, the world would witness 2Pac’s last release (All Eyez on Me), the beginning of Jay-Z’s musical reign (Reasonable Doubt), and debut albums from game-changers Lil’ Kim (Hard Core) and Foxy Brown (Ill Na Na). Influential groups like Outkast and A Tribe Called Quest also released notable projects that year (ATLiens and Beats, Rhymes and Life, respectively), but the presence of women emcees in rap groups was practically nonexistent. Blunted on Reality, the Fugees’ vastly underrated debut record, had first introduced hip-hop audiences to Ms. Lauryn Hill and her New Jersey outfit back in 1994, but it would take the group’s groundbreaking follow-up a couple years later for them to gain widespread notice.

That punched ticket was 1996’s The Score, which rightfully cemented Fugees’ place in hip-hop history and boasts the hardware to prove it. The album was certified six times platinum by the Recording Industry Association of America. At the 39th Annual Grammy Awards, The Score won for Best Rap Album. The sonic eclecticism that set the group apart from their contemporaries stemmed from their Haitian roots. “Everybody seeks refuge,” Jean told Vibe magazine in 1996. “We find refuge in music.” The way the album infused Caribbean melodies and sounds with soul, reggae, pop, and R&B — in addition to their use of timeless samples and potent lyricism — made it an instant classic.

“Red Intro”, featuring an appearance from Ras Baraka (son of poet Amiri Baraka), acts as a gritty and dramatic harbinger for The Score’s esoteric and gripping themes regarding capitalism, identity, and the normalization of hyperviolent masculinity. The spoken-word dimensionality of “How Many Mics” reveals that Hill, who rips through the introductory verse with equal parts passion and skill, plays second fiddle to absolutely no one: “Laced with malice/ Hands get calloused/ From gripping microphones from here to Dallas/ Go ask Alice if you don’t believe me/ I get in her visions like Stevie /See me ascend from the chalice like the weed be.”

She continues to ride her own wave on the explosive “Ready or Not”, which boldly samples Enya’s “Boadicea”. Hill proves her mellifluous prowess as a vocalist and rapper and venomously declares: “So while you imitating Al Capone/ I’ll be Nina Simone/ And defecating on your microphone.” Jean’s precocious wordplay coupled with Michel’s knavish similes (“I refugee from Guantanamo Bay/ Dance around the border like I’m Cassius Clay”) showcases the chemistry that makes the Fugees such a formidable trio on The Score. Jean was the provocative mouthpiece that teetered between revolution and redemption; Michel was the stern, yet playful, poet who would often get enthralled with his own musings; and Hill was the unpredictable virtuoso that bonded them together so remarkably well.

“Zealots” playfully and boldly pays homage to the ’60s doo-wop era. “The Beast” treads into political territory with razor-sharp precision by bashing Republican figures like Newt Gingrich by name, calling out the disturbing regularity of police brutality and America’s racist prison problem. Jean’s poignant observation of how wealth won’t save him from discrimination since he’s still a Black man is piercing: “My inner conscience says throw your handkerchief and surrender/ But to who? The “Star-Spangled Banner”?/ Oh, say can’t you see cops more crooked than we/ By the dawn early night, robbin’ niggas for keys/ Easy, low-key crooked military/ Pay taxes up my ass/ But they still harass me.”

Hill effortlessly floats on its follow-up, “Fu-Gee-La”, as she interpolates Teena Marie’s 1988 hit “Ooh La La La (If Loving You Is Wrong)” for the chorus while adding a bit of her own pomposity: “Ooh, la-la-la/ It’s the way that we rock when we’re doing our thing/ Ooh, la-la-la/ It’s the natural la that the Refugees bring.” As the lead single from The Score, “Fu-Gee-La” epitomizes how the three artists aptly complement each other: Hill’s vocal lucidity is a perfect contrast to the ebb and flow of Jean and Michel’s forward-thinking verses.

However, the album’s signature moment remains when Hill takes center stage on the Fugees’ rendition of the 1973 Roberta Flack classic “Killing Me Softly”. It feels bare and extremely intimate even as the bass drops 90 seconds into the song. Jean’s adlibs (“One time! Two times”) add a little gusto on a record that is already perfect. In the UK, this famed cover was the biggest-selling single of 1996. It was massive in the States as well and hit No. 2 on the Hot 100. It also won Best R&B performance by a Duo or Group with Vocal at the 39th Grammy Awards ceremony. “Killing Me Softly” celebrated Hill’s powerhouse range, which remains entirely immersive whenever it is showcased.

The Score’s title track honors the boom-bap style of rap with its whirlwind delivery of bars and rugged audio appeal. Jean’s take on Bob Marley’s “No Woman, No Cry” is heart-wrenching in its maudlin sentimentality. “Manifest/Outro” ends things on quite a tense note. Jean wraps himself in biblical references while contemplating his place in the world: “My cup runneth over, pass it down, guzzle up/ The time have arrived, the prophecy will manifest/ I saw death, I got scared, butterflies on my chest/ Father, if possible, pass this up before me.” Hill muddles in the devastating heartbreak that led to suicidal ideation, and Michel stands tall in his lyrical abilities by reminding listeners of its dynamism.

From beginning to end, The Score is a cogent representation of the arduous, yet resplendent, nature of hip-hop. All of its complexities — which encompass poverty, sexism, institutional racism, and inter and intraracial violence — are harrowing to hear but necessary to know and understand. Fugees acted as truth oracles whose inventiveness went on to inspire generations of rappers to come. The Score has stood the test of time and is a necessary listen for those looking to understand the rawness of ’90s hip-hop. Reflecting on its impact 25 years later confirms something that the group knew when they started making music together: The Fugees were always ahead of their time.

Essential Tracks: “Killing Me Softly”, “How Many Mics”, and “Ready or Not” 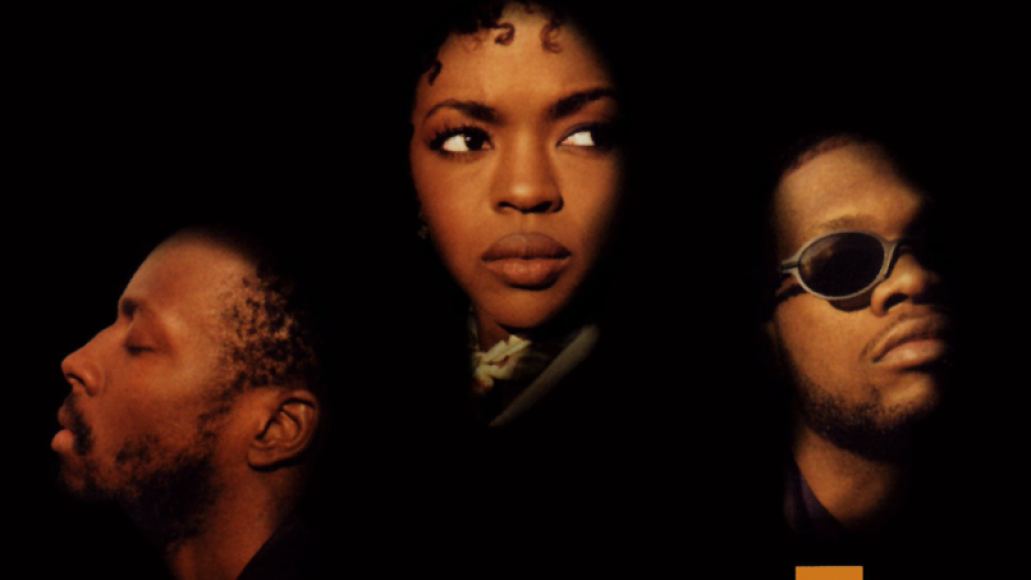 Fugees Scored Big at the Crossroads of Hip-Hop