With our Track by Track feature, artists take listeners through each track on their latest full-length. Today, Django Django shine a light on their Glowing in the Dark LP.

Django Django have today released their fourth album, Glowing in the Dark. Check out the effort below via Spotify and Apple Music, followed by a complete Track by Track breakdown of the effort.

Marking the English art-rockers’ follow-up to 2018’s Marble Skies, Glowing in the Dark tackles themes of escapism. While we all are still dealing with the unavoidable confines of the pandemic era, tracks like “Free from Gravity” and the Charlotte Gainsbourg-featuring “Waking Up” give us a chance to get lost in the band’s eclectic synthy dreamscape.

In fact, Django Django were extremely intentional about getting that point across during their songwriting process, as singer/guitarist Vincent Neff explained in a recent interview with American Songwriter’s Bringin’ It Backwards podcast:

“I think the storytelling, the themes of the tracks have kind of condensed more. In the past, sometimes we would have written songs that potentially would have been quite loose in what they were talking about — or maybe we wouldn’t have fully known what we were talking about. But I think we forced ourselves to, when we write a song, it has to be about something or otherwise it shouldn’t exist. We would have to sometimes catch each other and go, ‘What’s the track about?’ And people started hesitating or were like, ‘Well, it’s kinda about…’ You just have to say what it’s about in a sentence, because if you don’t understand what it’s about, how the hell will anybody else?”

Early singles included the title track — the Origins of which the band explored in an earlier feature, and which Hot Chip remixed back in December — and “Spirals”, which MGMT put their own spin on. Take a listen to Glowing in the Dark in full below, and read a complete Track by Track breakdown.

“Spirals”:
This is a song we designed for playing live and it’s been in the set for while. The title and lyrics are a reference to DNA. It’s really about the connections we have as humans being stronger than the divisions. We’re all connected and all related to each other no matter who we are or where we are from.

“Right the Wrongs”:
Vinny had this song kicking about for a while and Dave dug it out and put the drums on it. It was just a little synth line on a cheap Casio keyboard but had a lot of fun and energy. The lyrics are about closing the barn door after the horse has bolted.

“Got Me Worried”:
This track is just a bit of an excuse to use lots of percussion. It has some lines in Portuguese because we’d been working with a Brazilian Cuica player. It involved three people who all spoke Portuguese in really different dialects trying to teach a lad with a Derry accent (Vinny) how to pronounce stuff. A bit of a mission, but we got there in the end I think.

“Waking Up”:
This is a song about two people getting out of a small town to seek adventure. It’s probably a universal theme! It’s the romantic notion of life on the road. In our heads it was a cross between Wild at Heart and Bonnie and Clyde so we decided to invite our label mate Charlotte Gainsbourg to join Vinny on vocals.

“Free from Gravity”:
Another song about escape. This time upwards right out of the atmosphere. It’s really about the planet being in such a mess that we eventually have to leave but also just metaphorically it’s about escaping everything that’s weighing you down.

“Headrush”:
This came out of a phone recording of a live jam in the studio. The song is about the stupidity and madness of greed and war.

“The Ark”:
This was actually a song with vocals for a while but Dave stripped it back and added a Rolland 303 to make it instrumental. When we listened back something about it reminded us of being on a ship in a storm and when we added sound effects of animals in a zoo it had to be The Ark. 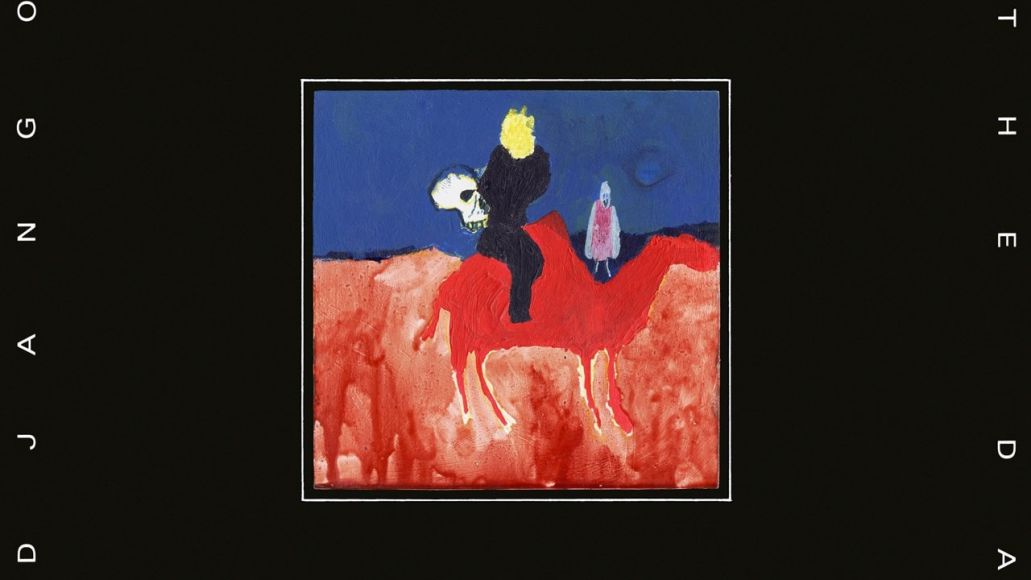 “Night of the Buffalo”:
This started as quite a different song from the finished version. Vinny had been reading how some native American tribes had sent money over during the Irish famine. Both groups we’re being forced into mass migration. The song is about resisting being driven from your homeland.

“The World Will Turn”:
It’s a song about saying goodbye to someone whilst holding onto the hope that you’ll see one another again some time down the line. It was initially meant to be a song which faded in and out between two tracks but we had Raven Bush in the studio one day playing a few violin melodies over the top and it seemed to give the track a bit more weight and purpose.

“Kick the Devil Out”:
This was a track that was knocking around for a while. Jim sang a line that sounded like he said ‘kick the devil out’ and it reminded us of the seminal ‘Kids in the Hall’ skit ‘Bobby Versus Satan’ so we went with this daft idea that the devil has come to stay with you but he’s a really bad house guest and even the most polite and hospital host ends up kicking him out!

“Glowing in the Dark”:
Just a daft little moog synth line and a looped beat. Vinny sang the line ‘now we’re glowing in the dark’ and it was chopped up and used as a chorus.

“Hold Fast”:
We were jamming and Tommy was playing a lot of arpeggio synth and it turned into this. The song is about holding on until the storm passes. Getting through rough times.

“Asking for More”:
This was a wee song that Vinny had a demo of and we didn’t change too much about the original demo. It’s about looking back at good times and being kind of stuck there in your head. It naturally had a Joe Jackson/Hall and Oates vibe to it, which we just ran with it.