The Pitch: Edee (Robin Wright) wants to get away from it all — life, family, civilization. She’s mourning something, or rather, escaping, but we don’t know precisely what. Flashbacks to a husband (Warren Christie), a son, and a concerned sister (Kim Dickens) give us plenty of clues, though. Packing up a U-Haul and driving across the country from Chicago to a remote cabin in Quincy, Wyoming, Edee makes it clear that she wants to be left alone to fend for herself.

Edee sends the truck and U-Haul away, leaving only herself and a sparse collection of canned food to fill her new home. Naturally, the city slicker doesn’t make it long before weather, starvation, and dangerous wildlife force the intervention of a kind stranger named Miguel (Demián Bichir), who helps her back on her feet and teaches her to survive the wild. Together, the two might not just bring Edee back from the brink of grief, but heal each other in the process.

Wright vs. Wild: Land is exactly the kind of directorial debut you’d expect from an actor like Wright, someone with decades of experience in the industry but without a lot of opportunities to put herself front and center. She’s long been an avatar for resilient feminine strength, and her self-reflexive understanding of her own career often finds fun explorations like Ari Folman’s puzzling but poignant The Congress, where Wright plays a digitally-scanned version of herself. Here, rather than run towards the future, Wright pulls back to the primitive survivalism of the frontiers of the past, carving Jesse Chatham and Erin Dignam’s nearly-wordless script into a showcase for her own sharp, soulful visage and the beautiful desolation of nature. 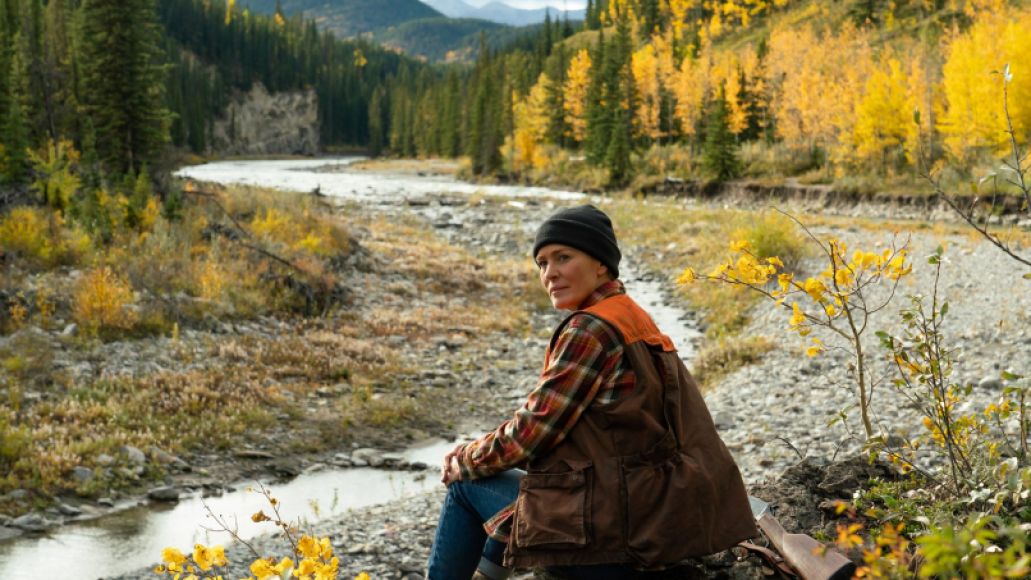 And, indeed, in the first half of Land, we get a glimmer of the minimalist splendor Wright is going for as she silently grieves and goes about her business setting up her lonely little cabin as a shrine to her anguish. Cinematographer Bobby Bukowski floats us in the crisp majesty of the Wyoming countryside, panning over the snow-capped mountains and beautifully verdant meadows, allowing us to revel in the same kind of eye-candy Edee wants to spend (presumably) her final days in. It’s a gilded tomb Edee wants to slowly die in,

Time for Three: Aiding Bukowski’s sun-dappled visuals is the score by Ben Sollee and Time for Three, a lush collection of folk-soaked cues that both immerse viewers in Edee’s neo-Western environment and touch on the aching, unrelenting pain Wright stuffs into every wounded gesture and expression. Plucked strings and double bass permeate the score’s texture, the occasional discordant string leaving a pang of unease in the film’s otherwise-lush textures — echoing, presumably, Edee’s aimless drifting through the rocky currents of her grief. 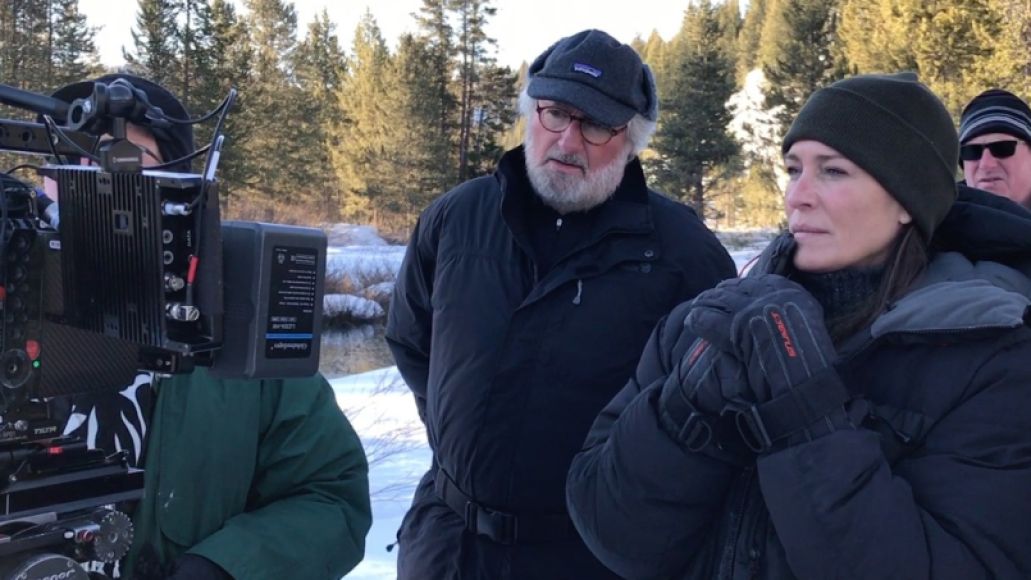 See Ya, Yoda: But of course, it’s when Bichir arrives as Edee’s wise but unassuming platonic mentor and friend that Land both opens up and closes down, lending some much-needed dynamism while paradoxically highlighting the film’s disappointing nudge into formula. To his credit, Bichir is a welcome screen partner with Wright, both of them saying volumes with little more than knowing glances and the occasional a capella rendition of Tears for Fears’ “Everybody Wants to Rule the World.” (What is it with Sundance flicks and that song?) He’s kind, helpful, and curious about Edee, though more as a reflection of his own grief — the two bond over lost family — than anything resembling romance.

Unfortunately, as winsome as they are together, these acts are when Land largely abandons its formal ambition for more conventional sentiment, leading up to a mawkish conclusion as tearjerking as it is manipulative. Suffice to say, Land‘s final scenes cement Miguel largely as a narrative device to help a white woman heal from tragedy and move forward on her own, which feels a disservice to the actors’ impressive work (and Wright’s deft direction of them both).

The Verdict: In a way, we’ve all spent the last year as Edee — locked away from everyone else, mourning the loss of the lives we used to have, and learning how to exist in our own thoughts and spaces in ways we never had to before. At its best, Land nails that contemplative sense of loss, and our collective yearning to connect with others. But for all its gorgeous visuals, comforting score, and strong non-verbal performances, there’s just not quite enough there at the script level to make Land‘s broader points, well, land. Capturing the tedium of solitude is certainly a deliberate aim, and Wright shows a deft hand in the director’s chair (one wonders what she’d do with a sophisticated ensemble drama or thriller; she strikes one as a skillful actor’s director). But as a 21st-century retread of Jeremiah Johnson, Land is a bit too nonspecific to invite you in.

Robin Wright Tries to Ground Herself in the Sumptuous But Hollow Land: Review