The Pitch: Did you read that Vulture interview with David Fincher where he described Alien 3 as making “a library title for a multinational, vertically integrated media conglomerate”? And you know how Scorsese reasonably tsk-tsked the usage of the word “content” because of how media companies and journalists have been using that condescending term to describe works of art?

Ladies and gentlemen, here’s the latest piece of content for vertically integrated media conglomerate WarnerMedia’s library, Tom & Jerry. Yes, Tom & Jerry 2021 arrives this weekend on HBO Max, and answers the age-old question of what a Tom and Jerry ‘toon would be like today, and whether they could fight to Eric B. & Rakim’s “Don’t Sweat the Technique”.

The Short, Short, Short of It: Your kids will probably like this fine, although, come to think of it, my kid wanted out pretty fast (he watched after embargo). And he loved “Mouse Trouble”. You know, the one where Jerry socks Tom in the eye? It won an Oscar.

Skinning the Cat: If you have any passing familiarity with MGM’s Tom and Jerry, Looney Tunes, cartoon violence, or more specifically any of the live action animation revamps of the last 20 years (Robert DeNiro’s Rocky and Bullwinkle, Dan Aykroyd’s Yogi Bear, Tracy Jordan’s Garfield 3: Feline Groovy), you know what’s up. Uncannily high-definition re-skins of crudely drawn favorites – here, homicidal blue cat Tom and punchy tan mouse Jerry – interact with doddering humans. There’s a wedding and a hotel or something and they’re all up in it. Sure, we could cover the ins and outs of the plot and these animals’ motivations. But again. You just know. “Jokes”. Attitude. Wooden people. Bonk and repeat. 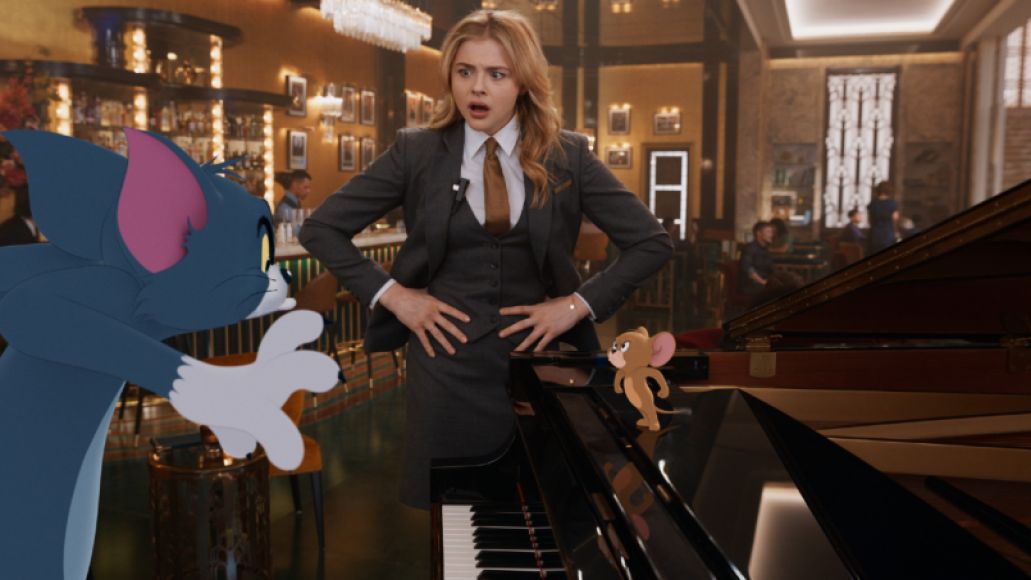 For the kids, there’s borrowed slapstick. Tom, Jerry, and a mastiff voiced by Bobby Cannavale trade hands in a swirling cloud. Tom, in an homage, straps on bat wings and tries to assassinate Jerry from the night sky. Jerry turns his hole in the wall into a swinging lounge and answers the door in an alluring towel. Add some puns, some sound effects, and some lingering anxiety that bigger laughs will never come and assessing this movie is meaningless and my life is leaving me.

And what of those silly humans? Which familiar comedians were invited to receive delicious studio paychecks? Ken Jeong, Michael Péna, Rob Delaney, Colin Jost – all playing to stereotypes. Gentlemen, you’ve done better, but I envy your new second homes.

Don’t Make Yourself a Mouse, or the Cat Will Eat You: The very few highlights include some Rube Goldberg machinery, Tom pulling a Steve Bartman at Yankee Stadium, and plentiful hip-hop and R&B. But for a movie inspired by a prized minefield of sillies, Tom and Jerry pulls punches. The danger is declawed. The animation’s bright, smooth, and safe. Like something a toddler would want to stick in its mouth.

The old cartoons were rough and a little dangerous, and it’s strange to watch a new Tom & Jerry and think, Man, your grandparents’ cartoons were wild compared to this. That’s not to say that Tom shouldn’t have had his old guns taken away. You can do zany without murder weapons! More to the point, this is a thin brand exercise: IF YOU LIKE TOM AND JERRY MOVIE ON HBO, YOU MIGHT ALSO LIKE THE ORIGINAL ANIMATED CONTENT ALSO HOUSED ON THE PLATFORM.

Verdict: If theaters were open, you’d drop the kids at this flick and check out a political thriller next door, hoping for the best. For now you’ll leave this on an iPad, while enjoying your docuseries about murder in another room. Your comfort with allowing tots to take in poop humor and feline brutality may vary. But the dispiriting thing is that Tom & Jerry is far from the worst family film in the world. It’s just a familiar, by-the-books, vertically integrated product to ensure continued IP visibility for the film and television arm of a corporate portfolio. Here’s the latest and laziest IP for you to become disenchanted by, should you feel so inclined.