The Academy of Country Music has barred Morgan Wallen from “potential involvement and eligibility” in the upcoming 2021 ACM Awards after he was caught on camera using a racial slur. The ban will prevent the country singer from appearing on the show or competing for any awards.

Wallen has since apologized, telling TMZ, “I’m embarrassed and sorry. I used an unacceptable and inappropriate racial slur that I wish I could take back.” But that didn’t stop radio stations from pulling his music, Spotify and Apple Music from removing his songs from their country playlists, or his record label from suspending his contract.

After reviewing the footage, ACM issued a statement on Wednesday afternoon, writing, “The Academy of Country Music will halt Morgan Wallen’s potential involvement and eligibility for this year’s 56th Academy of Country Music Awards cycle. We have made his management team aware of this decision. The Academy does not condone or support intolerance or behavior that doesn’t align with our commitment and dedication to diversity and inclusion.” Read the full statement below.

Shortly after ACM announced its ruling, the CMA Awards — which are not affiliated with the Academy of Country Music or its awards show — announced that it’s “removing [Wallen’s] digital content” from its platforms. “We support our Country Music partners for taking swift action,” the CMA said, adding that it will consider additional measures after speaking with the Board of Directors.

Wallen’s new album Dangerous: The Double Album has been the No. 1 record in America for the past three weeks. He earned a coveted spot performing on Saturday Night Live a few months ago, but he was dropped as the musical guest after footage surfaced of Wallen inside of a bar without a mask, a violation of the show’s COVID-19 protocol. He later was re-booked to play SNL and parodied the incident in a sketch. 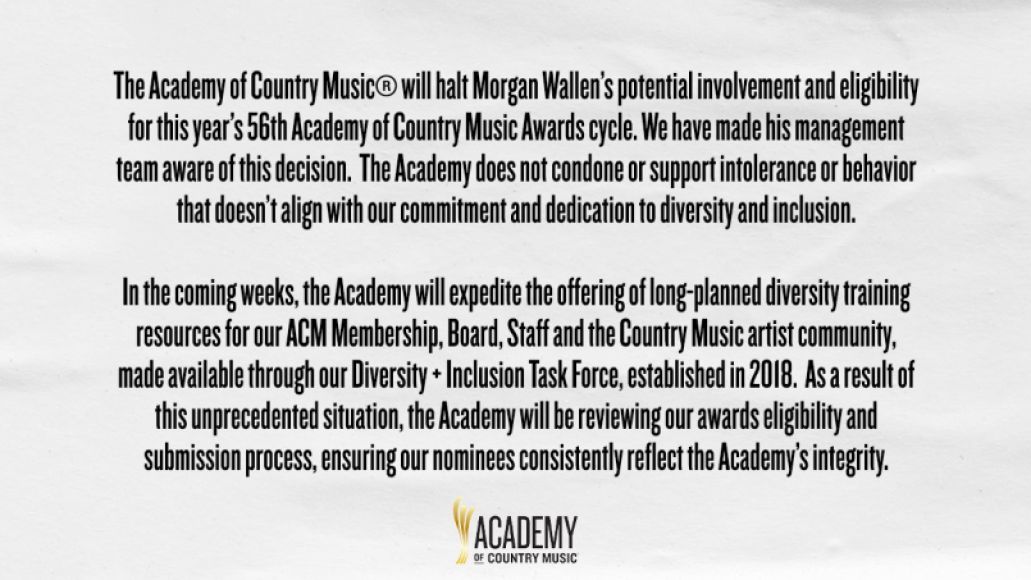 Morgan Wallen Barred from Academy of Country Music, Not Eligible for 2021 Awards