In our Track by Track feature, we ask musicians to take listeners through the stories and meanings behind each song on their latest album. Today, NOFX’s Fat Mike explains the group’s Single Album.

NOFX are due to return with their 14th full-length record, Single Album, on February 26th. Ahead of the release, the Los Angeles punk veterans are premiering the LP early, along with a complete Track by Track breakdown of the effort.

Single Album was initially supposed to be twice as long, with the band having tracked some 23 songs. “I wanted to make a perfect double album, and I didn’t accomplish that,” Fat Mike says. “So I decided to just make a single album, hence the title.”

The effort may be thinner than intended, but it’s also far more personal. It finds the band’s frontman confronting everything from his drug addiction (he entered rehab last fall) to humans’ mortality (“Doors and Fours”), sometimes all at once (“Grieve Soto”). Lead single “Linewleum” (featuring Avenged Sevenfold) takes a meta look at NOFX’s own legacy, while “Fuck Euphemism” turns an examination of Fat Mike’s sexuality into a “pronoun bar fight.”

It’s a darker record, for sure, but it thrashes just as hard as ever. Over three decades since their debut, and following some of the roughest patches of their career, perhaps that’s exactly what we should expect from NOFX in 2021.

Take a listen to Single Album in full via the YouTube playlist below, and pre-order it now via Fat Wreck Records. As you listen to the stream, read along to Fat Mike’s super in depth Track by Track dissection ahead.

“The Big Drag”:
“The Big Drag” was influenced by “Rotten to the Core” by Rudimentary Peni. What is interesting about the guitar riffs is that every time the chord changes, so does the rhythm. Every C has the same rhythm, every G has the same rhythm, but each chord rhythm is slightly different. As for the bass, it never really lands on any one note. When the drums kick in, the bass pretty much just slides up and down the neck causing the listener to feel on edge the entire time. That kinda thing makes me very happy…

Another interesting fact about this song is that no measure is the same length. I wrote the lyrics first, and then I just made them fit melodically with the chords by playing the single chords for as long as I felt they should go. Once again, it’s supposed to give the listener a sense of uneasiness. BTW, this is one of my favorite NOFX songs I’ve ever written. It is next to impossible to play live because there are no rules and no patterns. It’s a free-form song. I can’t name another song that sounds like it… but then again, I hardly ever listen to music. Oh, and around 1:30, it modulates a half step down. This is another way to make a listener uneasy…. Yes!

“I Love You More Than I Hate Me”:
I like the acoustic version of this song better than the version that’s on the album. The lyrics are more poetic, and there are some sweet piano notes. This might be the saddest song on the album. There’s a video for it that got more views than any other song on the album, but the video has nothing to do with the theme. The first few lines of this song are about me, but then it turns to a different protagonist who shall remain nameless.

Also, most of the chords are played inverted, which gives the song a kinda different feel.

“Fuck Euphamism”:
This is a cool punk song that I came up with at rehearsal, and the band and I went to town with it. It wasn’t written in advance, which is weird for NOFX. We just jammed it, and it sounded just right. When I got around to writing the lyrics… It was the easiest song I ever wrote. Sometimes lyrics just happen. Some songs take two months to write. This song took two hours. I just wrote what was on my mind and in my vocabulary. If you’re gonna take one thing away from this song, don’t let it be that I am a cross-dresser. What’s relevant is the term “per.” It is a great pronoun for anyone who is non-binary or gender non-specific. It is certainly less confusing than “they or them” unless, of course, you are from the split personality tribe or a Siamese twin.

“Fish in a Gun Barrel”:
What makes “Fish in A Gun Barrel” unusual is that while the guitar rhythm is fairly straight, the vocals come in, in a different place every time I sing a new stanza. The first time the listener hears the song, the guitar and vocals sound like they’re off time. They’re not; it just took me hours and hours late at night to figure out what the time signature was gonna be. I actually felt like I was going crazy while writing this song. Right at the beginning of the song, I start singing one-quarter note too soon. It’s all done for a reason. To make the listener feel like the guitar didn’t play the correct amount of strums. Ha!

“Birmingham”:
What can I say about this song? It’s pretty neat when you have a realization about yourself, and at the same time, you come up with a lyric that hasn’t been sung before. Or at least you never knew it had been sung before. Then while you’re singing it in the studio, you get the words a little wrong but keep that take because it’s in key, and it proves the point of the lyrics.

I should note that Bill Stevenson was not stoked on my not quite sober behavior. However, being one of the best producers on the planet, he worked with the band that hired him. (I bet he was thinking of how cool it is to produce Rise Against many times during this recording session).

I must give credit to BAZ, the Frenchman who really helped with the arrangement of this song….. I gave him a demo of the acoustic version, and he gave me a whole bunch of cool ideas. Thanks, BAZ!

“Linewlium”:
“Linewlium” is a unique song because it’s about retiring NOFX’s most favorite song “Linoleum.” I don’t know if that’s been done before. The main guitar riff is kind of the NOFX signature super-fast palmed metalish riff…but it’s played on two strings instead of one. The weirdness comes when the first two chords and melody are the same as the original song, then the chord progression, melody, and lyrics suddenly change. It was written to fuck with people’s brains, and it worked. The guitar sounds and melodies are so familiar, but they keep changing. This song makes me happy for the same reason “The Big Drag” does… it confuses people.

It also confuses people that NOFX is bros with Avenged Sevenfold… well, they are the coolest metal band that we’ve ever met… Sorry, Deftones and Slipnot. Close second…

“My Bro Cancervive Cancer”:
This is probably the least important song on the album, but the story is kinda rad because it’s all true! Like most of my songs, it all really happened. I loved it!

I played this song for my friend Jeffery from Tilt one day, and he said, “Is that Brett from the East Bay you’re talking about?” I said yeah, that kid with brain cancer. Jeffery told me that Brett had been telling bands that he had terminal brain cancer for 10 years!!!! Apparently, Brett got free T-shirts and merch and records from everyone from My Chemical Romance to Lagwagon! I fell for the sad story, too, but he got a whole song from me! Fair enough, Brett. Respect! You fooled me and many others, and I say, “You fucking out punked us all!” Nice work! But wait till you hear “The Fake a Wish Foundation” on our next album…ouch!

“Grieve Soto”:
Of course, I had to write a song for the best guy in punk rock! But I lost my train of thought halfway through it, and it turned into a meta song about who fucking knows what. There are like five versions of the ending. I don’t think any of them really worked. The L.P. version is different from the CD version, which is different from the acoustic version…. Nuff said…. Steve Soto was an amazing human that we miss very much! 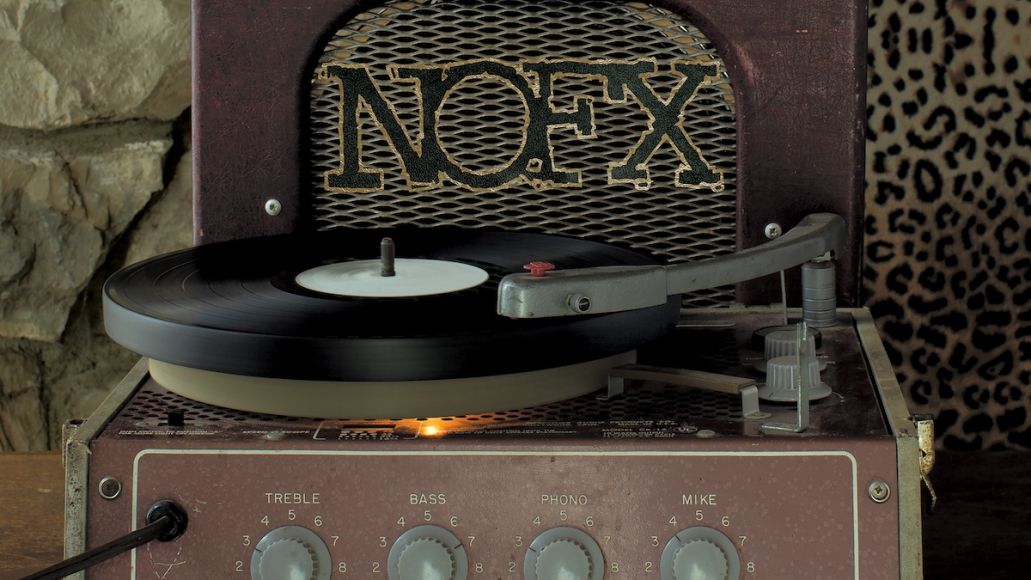 “Doors and Fours”:
This song is good, but not as good as the video of this song… which was directed by Dave Markey from Sin 34 (a great L.A. hardcore band that I went to high school with). Funny story, Fletcher from P.W. wrote me earlier today telling me how much he dug the video. Normally that would be pretty dang cool until I got this other text this evening: “Loads, Haha, Been a while!…. Love the song and the video! P.S.: it’s P.S.”

Fletcher… you’re cool n all, but I got a text from P.S., who is actually in the video! P.S. who is not only as nice as Steve Soto, but is cooler than Steve Soto cuz his band was cooler than the Adolescents. Hard to imagine, but that’s just how it was.

Back to the song….I got the idea to write this song from the intro to the Fatty Arbuckle autobiography “I Fatty.” I don’t know why the introduction to a book about the biggest and most infamous American comedic film star of the 1920s would be about a lethal drug from the infamous L.A. punk scene in the early 1980s…. but that’s just how it was.

“Your Last Resort”:
The last song on the album is called “Your Last Resort.” This was recorded 8 months after all the other songs. BAZ recorded this song, but Jason Livermore mixed it. My favorite part of the song is when I sing the line, “We were strapped down with minor cords as we set sail into the dark and sharpest sea”. The cool part is that I hit a C sharp minor chord at the end of the line. Get it… sharpest C. Seems obvious now, but if I didn’t mention it, would you have noticed? Well, I thought it was pretty cool. Also, towards the end of the song, we hit some crazy drum rhythms that make it super hard to pull off the matching guitar riffs. Definitely the most difficult and time-consuming guitar playing on the record. It took hours to play a 15 second part. Was it worth it?