This past weekend, Phoebe Bridgers made her eagerly anticipated debut as the musical guest on Saturday Night Live. During the final moments of her performance of “I Know the End”, a track from her buzzy sophomore album, Punisher, Bridgers went out with a bang — literally — when she repeatedly smashed her guitar into a monitor onstage. Unfortunately, the Internet being what it is, Bridgers’ epic moment of punk euphoria was clouded by curmudgeonly chatter.

A simple search of “Phoebe Bridgers guitar” on Twitter brings up a litany of comments wondering why “that woman” had the nerve to “damage expensive property.” Others called the act pointless and even poked fun at Bridgers for apparently not being strong enough to have done more physical damage to the instrument. No matter how much doom scrolling is done on the topic, the bottom line remains: Phoebe Bridgers, a young female rock artist, was picked apart for doing something that scores of male artists who came before her were heralded for.

Historically, male rock artists have been praised for subversive behavior — and this includes instrument smashing on far more grandeur levels than what Bridgers displayed over the weekend. The Who guitarist Pete Townshend made it a habit, YouTube montages exist of Nirvana’s Kurt Cobain thrashing and tossing his guitar about, and a photograph of The Clash’s Paul Simonon crushing his bass onstage later became iconic when it graced the cover of their magnum opus, London Calling. At the time, very few were likely piping up to wonder if Townshend, Cobain, and Simonon “knew how much they were ruining their own gear.” Rather, these acts were viewed as bold, cool, and pure rock and roll. It still very much was when Bridgers did it, but unlike her male peers before her, she doesn’t fit the mold (that is, check the proper gender box) of what society deems normative for a guitar-smashing rock star. That shouldn’t be Bridgers’ problem, but it is a sobering reality check that large pockets of the world still harbor backwards views when it comes to frontwomen and female guitarists.

Why did this woman, Phoebe Bridgers, destroy her guitar on SNL?

I mean, I didn't care much for the song either, but that seemed extra. pic.twitter.com/ayXgFXtex4

Bridgers’ guitar-smashing incident is a microcosm of the perpetually unequal playing field female rock artists are subject to navigate. Unlike a handful of other genres, perhaps most notably pop, rock has always remained a very heavily male-dominated space. This is largely due to the fact that many of the genre’s defining characteristics, such as anger, angst, subversion, sexuality, rebellion, and all around heavier soundscapes, have a longstanding history of being societally coded as belonging to males or being for males. While women obviously hold no shortage of those traits themselves, the reality of that has long proven to be a tough pill for certain circles of society to swallow. From The Runaways famously being put through hell before they were even old enough to receive their high school diplomas to the Haim sisters receiving enough sexist coverage to the point where it fueled their Women in Music Pt. III track “Man from the Magazine”, history is peppered with instances of women in rock being treated as if they’re wrongly taking up a space that is not meant for them. Bridgers smashing her guitar was only “controversial” for this reason. By performing an action that is traditionally coded as male in a male-dominated industry, she claimed that space boldly and asserted her right to have that moment.

A reason the criticism surrounding Bridgers’ performance feels frustrating is because it puts a damper on celebrating what was otherwise an effortlessly cool rock and roll moment. In addition to delivering the significant imagery of a young woman smashing her guitar on national television, Bridgers took a risk in a situation where many would have likely opted not to. Saturday Night Live has an enduring reputation for being one of the most highly sought after performance slots for artists of varying backgrounds and career scales. It’s a big deal for Bridgers, a relatively fresh face, to land the gig just less than a year after releasing the album that really began to fan the flames of her work. This is a situation where many artists would have likely felt pressure to deliver the most polished performance possible, particularly young artists like Bridgers who have a career and connections to maintain for many years ahead. That said, on paper, a Saturday Night Live  performance isn’t one where artists would be typically encouraged or inclined to color outside the lines. Instead, Bridgers brilliantly flipped the script and delivered a moment that felt refreshingly unvarnished, raw, and dangerous. It was a breath of fresh air in a climate where most new rock that’s greenlit for mainstream consumption tends to feel a little overly manicured. It also placed her in the company of artists like The Replacements who took a gamble and marched out of line on their respective Saturday Night Live debuts. It was a move punk enough to dispel any wallowing of how the idea of the rock star is dead and underscored the ever-important message that young women in rock deserve to be loud, chaotic, and destructive, too. 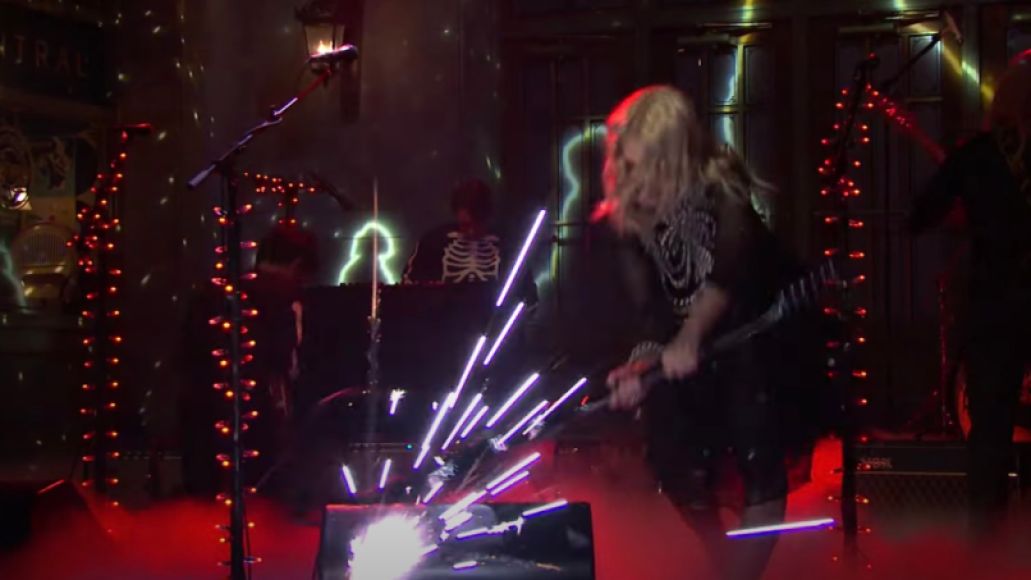 When all was said and done, it was Bridgers who had the last laugh. In response to the gear warriors who zeroed their criticism in on the destruction she caused to the guitar and monitor, she revealed that the moment had actually been carefully thought out all along. Her plans received advance blessings from guitar manufacturers Danelectro, and she was even given a fake monitor to smash it against. So, rest assured: Phoebe Bridgers did, in fact, know exactly “how much she was ruining her own gear.” And we thought she looked damn cool doing it, too.