If you find yourself stressed out, you may want to pop in a song by Pet Shop Boys … or Megadeth! According to a new study, ’80s pop and heavy metal are the two best genres of music to listen to when it comes to reducing blood pressure, heart rate, and anxiety.

Turkish hair restoration company Vera Clinic, in an effort to look at the connection between music, stress, and hair loss, conducted a study of 1,540 people. The volunteers, aged 18-65, listened to various Spotify playlists as they completed non-verbal tests that were designed to produce low levels of stress.

On the opposite end of the spectrum, techno was the worst at reducing stress. In fact, listening to techno increased heart rates by an average of seven percent, with 78-percent of respondents showing a rise in blood pressure.

Doctor Ömer Avlanmış, who conducted the study for Vera Clinic, explained: “The results may seem surprising on first inspection – but medically they make a lot of sense. ’80s pop hits could have positive nostalgia attached to them for many people, and their upbeat, party-like sounds can induce the release of endorphins and serotonin in the brain, both increasing feelings of happiness and calm.”

He continued, “In terms of heavy metal, I’d observe that angry music can help listeners process their feelings and as a result lead to greater well-being.”

Study shows listening to metal can cause bad driving

While metal may reduce stress levels, it apparently isn’t the safest music to listen to while operating a vehicle. A 2019 study showed that blasting heavy metal in a car leads to an increase in erratic driving as compared to mellower tunes.

See the full results of the Vera Clinic study on how various genres of music affect blood pressure and heart rate below. 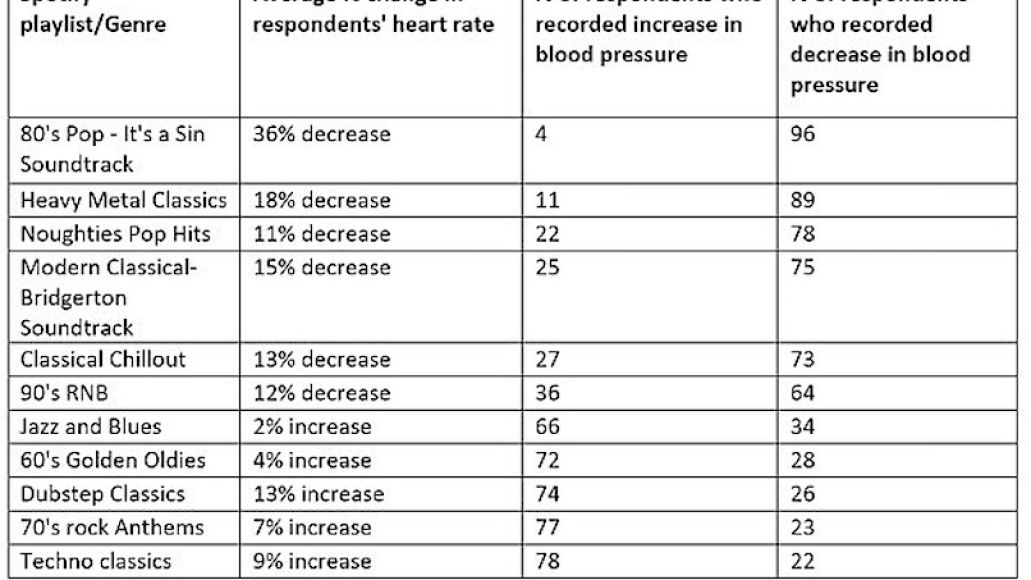