The Pitch: 17-year-old Ruby (Emilia Jones) doesn’t have your typical adolescence: the child of a Massachusetts fishing family, she splits her time between the awkwardness of high school and helping her family out on the boat, doing her best to help her family keep the business afloat amid union disputes and predatory fish buyers who try to take advantage of them.

There’s another complication: Ruby is the only hearing member of her family, the rest of whom — father Frank (Troy Kotsur), mother Jackie (Marlee Matlin), and brother Leo (Daniel Durant) — are deaf. This places added pressure on her as the one person who can translate ASL to the world around them; she’s inexplicably tethered to them.

Of course, Ruby soon discovers she has dreams of her own. After joining the high school choir class to be close to a cute boy named Miles (Sing Street star Ferdia Walsh-Peelo), she begins discovering her gift for song thanks to the Sundance-mandated Inspirational Teacher, Mr. Villalobos (Eugenio Derbez). Will she give up her dreams to support her family? Or will the one hearing member of this deaf family — forgive me — find her voice? 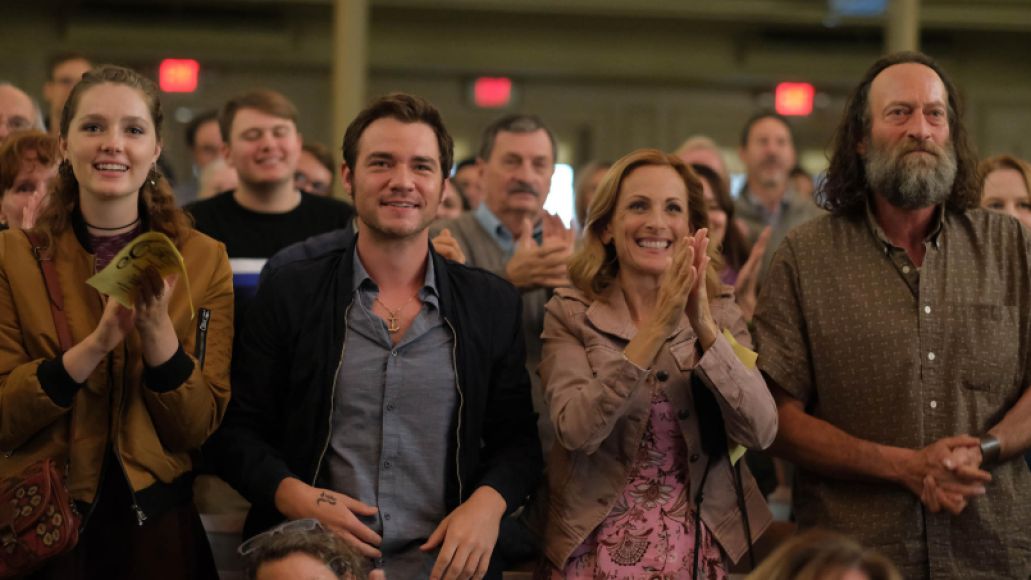 Double Heder: From Smooth Talk to Hearts Beat Loud to a dozen Sundance movies since, the indie teen coming-of-age drama is a staple of Park City’s favorite film festival. In a lot of ways, we’ve seen almost every beat Sian Heder’s second feature (her first after Tallulah, another Sundance fave from 2015 about teenhood) has to offer: the endearing teen protagonist, the navel-gazing romance, the charismatic mentor figure who helps our hero find their muse, with bittersweet but uplifting final moments where our family finds peace with each other.

And granted, the first act of CODA throws one red flag after another at us, from Derbez’s scarf-swishing supporting turn (threatening to turn him into a flamboyant stereotype) to the way Miles does little but shrug his shoulders and sing, remaining firmly out of reach from Ruby except as an object of affection. Each of the creaky tropes of the Sundance family dramedy line up after one another like dominoes; more cynical audiences might find it easy to disengage at this point.

Matlin and Kotsur are incredibly vivid and charming, eking out funny, heartfelt performances that benefit from the specific ways they communicate. Both actors say more with their faces and hands than some do with their voices, particularly Matlin (who’s long been one of the most talented and high-profile deaf actors in Hollywood, winning an oscar in 1987 for Children of a Lesser God).

Kotsur, a deaf actor who’s been working in relative obscurity for 20 years, gets a hell of a breakout here, crass and heartfelt in equal measure, a real gruff softie whose only crime is being a bit too enamored of his wife in public. Durant’s Leo gets a bit less to do, but his subplot where he tries to fit in with the alpha-male fishing community — and help the family set out on their own with a co-op initiative — explores some of the insensitivity the hearing world has to even the simplest accommodations for deaf and hearing-impaired people.

Heder never makes any bones about this being the Universal Deaf Experience, but she approaches the tribulations of this specific deaf family with heart and authenticity. Moments where Ruby’s parents attend a recital, only for them to struggle to know when to clap on rhythm or understand the words, are relatable and effecting — especially when Heder drops the sound mix to give you a glimmer of their disconnect with their daughter’s newfound passion.

Staying On Key: Like Ruby’s family, much of CODA‘s emotional appeal rests on Jones’ capable shoulders, and it’s an incredibly charming turn for the breakout star. She’s got the voice of an angel, to the point where it almost feels like more work for Jones to perform the act of singing poorly (she just doesn’t have confidence, you see!).

But she admirably conveys the push and pull of her varying obligations, reaching right up to the edge of pathos without tilting over into melodrama. She keeps up with her family’s occasionally-tense scraps, but also adorably melts in the presence of Miles as they bond over music. And the film’s final moments, where she finally gets her Big Moment in the spotlight, will make you reach for the tissues.

The Verdict: It’s tough to ding CODA too hard for its faults. After all, its adherence to formula feels like the point: “See, deaf and hard-of-hearing people can have their own treacly, Sundance-ready family dramedy!” But considering the film’s record-breaking $25 million acquisition at the festival by Apple, it’s clear there’s something to appeal to a wide audience. And who knows? Maybe the formulas we’re so used to will be exactly the vehicle to introduce general audiences to the lived experiences of a community criminally underserved in media.