The Pitch: Impossible as it is to describe the story of a Sion Sono movie, here goes: Hero (Nicolas Cage), a bank robber imprisoned after a botched robbery that got several people killed (including a small child offering up a gumball), is released by the sadistic Governor (Bill Moseley) of Samurai Town, a bizarre mish-mash of Eastern and Western that looks like a soundstage for a cowboy vs. samurai TV show, for a strange mission. You see, his daughter Bernice (Sofia Boutella) has gone missing, having ended up in the Ghostland, a Thunderdome-like wasteland whose irradiated residents spend their time dressing in the fragments of broken mannequins and pulling on a giant rope to keep the town’s giant grandfather clock from ticking, lest they trigger a nuclear holocaust.

To ensure compliance and speedy delivery of Bernice back home, the Governor outfits Hero with a black leather jumpsuit outfitted with bombs attached to his neck, arms, and testicles (one for each ball). If he even thinks about doing violence to women, one of his arms will explode; if, uh, he gets too excited, guess which ones will go off?. And before his journey will be done, he’ll wrestle with his demons, work with cybernetic tinkerers named Rat Man and the Rat Clan, and forge an erstwhile rivalry with a samurai (Tak Sakaguchi, essentially reprising his role as Musashi Miyamoto from last year’s Sion Sono-penned Crazy Samurai Musashi). There are also toxic waste zombies who drive a school bus and are led by a severely burned man played by the director of The Notebook. You get all that?

Scion of Sion: If Prisoners of the Ghostland is your first exposure to Sion Sono, heaven help you. The director, who’s made more than 50 films in his 35-year career, is the poster child for the bizarre, idiosyncratic, and gonzo sensibilities of subversive Japanese genre cinema, at once indebted to American pop culture and cinema while also filtering it through the hyperkinetic sensibilities of his home culture. From Antiporno to Love Exposure to Tokyo Vampire Hotel, Sono’s works throw everything at the screen — buckets of sex, violence, gore, and surreal imagery — and don’t much care if you can’t keep up. Prisoners of the Ghostland is his first English-language feature, and his excesses come right along with him, for both better and worse. Sono’s stuff has always been weird, but his best works channel that cinematic anarchy into bubblegum thrills that at least take you along for the ride with him, or make clear their grander subversions. Ghostland, at best, could be read as a tongue in cheek perversion of Western blockbuster cinema, what with its bizarre blend of East and West, but little is done with that apart from the immediate visual treat of seeing samurais and cowboys pointing their weapons at each other. 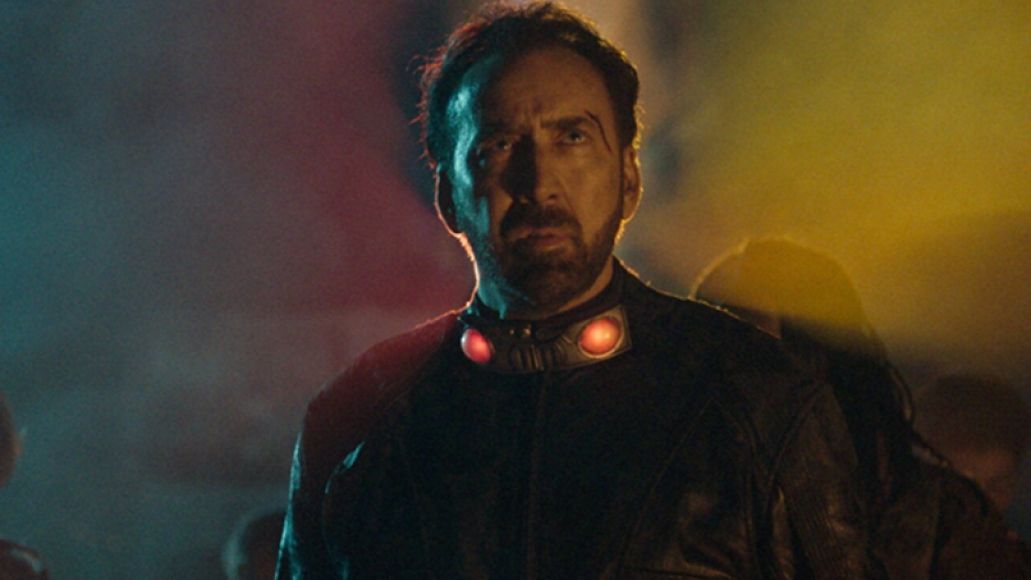 Kept In His Cage: Of course, the appeal for American audiences is seeing Cage, one of the nuttiest and most memed actors of all time, in such a crazy, self-aware role. To his credit, just taking the role itself evinces the kind of knowledge of himself and his brand, and his love of taking out-there roles (see recent turns in Mandy, Mom and Dad and Color Out of Space for more evidence). But in terms of sheer wildness, Cage is comparatively muted and disappointing here; like so many American actors at the mercy of foreign directors bringing stars into their weird sensibilities, he feels a bit lost in the weeds, forced to do little but glower for much of the runtime. Granted, the final act crystallizes into a roaring rampage of revenge that gives Cage plenty of fun things to do (including shouting “TESTICLE!” at the top of his lungs in the middle of an inspiring speech), but you’re very much left unmoored up to that point.

It’s a fascinating performance from the perspective of Sono, who clearly wants to play with the wacky, Drive Angry version of Nic Cage who’s graced many a Redbox cover in the last couple of decades. It’s a role that merely requires Cage to show up and Do His Thing, which leaves little to challenge him. When you can feel Sono all but poking him with a stick and asking his monkey to dance, it takes some of the fun out of seeing Cage holding an exploded testicle aloft or squaring off with samurai with a katana arm.

The rest of the cast suffers similarly, especially Boutella, stuck as a mute damsel in distress for the vast majority of the runtime until that bonkers final act (give her more action roles, Hollywood!). At least Moseley is having a ball, slathering on the mow-lasses with every line he mutters in a gleeful Southern drawl and white three-piece suit, his Governor feeling like a Colonel Sanders who’s started an authoritarian dictatorship. Most of the time, they (and Cage) feel like strangers in a strange land, doing their own thing in the middle of Sono’s more deliberate narrative anarchy — focused more on bold colors and shouted lines than crafting those elements into a coherent scene or story.

The Verdict: Nic Cage has described Prisoners of the Ghostland as “the craziest movie he’s ever done,” and there’s an element of truth to it: fitting for Sono, the film is a cavalcade of anime-inspired extremity, filtered through American cinema as it restyles one of America’s most iconic figures through the lens of his own previous roles. But it’s tough to parse how much of Ghostland‘s joys are Sono’s cheeky prods at American culture (see the on-the-nose cultural pulls to Drive Angry and Mad Max, as well as cheeky signs like “Make Our Country Great Again” on a park bench in Samurai Town) are interesting, or merely appealing to Western audiences for their novelty. It’s a film that makes no pretensions towards making sense, and you can’t watch it on that level. The question is whether its lol-random approach will appeal to you, or whether its giddy need to throw everything at the wall just flattens into an obnoxious desire to please. Prisoners of the Ghostland knows exactly what it is, but that may not necessarily be a good thing.

Nicolas Cage Goes Nuts and Blows Nuts in the Bonkers Prisoners of the Ghostland: Sundance 2021 Review