While Fastvolds direction centers on the two central characters Abigail (Katherine Waterston) and Tally (Vanessa Kirby), it’s no surprise Shepard and co-writer Ron Hansen penned the script. They do well to capture the gaze, but the story misses key goals that exist outside the world of the patriarchy. One wonders what Fastovold’s interpretation of the material would look like.

The Female Gays: Abigail is an unhappy housewife mourning the death of her daughter. Most of her days are spent moping around the house, milking the cows, cooking, and cleaning. The only thing that brings her real joy is creative writing. As a self-taught academic, she journals everything she thinks and feels, in addition to writing poetry.

Abigail’s forlorn husband, Dyer (Casey Affleck), tries to help her heal through the tragedy, but she’s indifferent to his affection. However, a spark ignites when new neighbors Finny (Christopher Abbott) and his wife Tallie arrive. Before the two women even speak, they have a staring contest, making it quite clear there’s a connection between them.

From there, the two women begin seeing each other every day, developing something that goes beyond friendship. They recite poetry to each other and love spending time together, but their husbands always kill the vibe with their patriarchal expectations. Dyer suspects something more is happening between Tallie and his wife, but he seems content with seeing her happy. 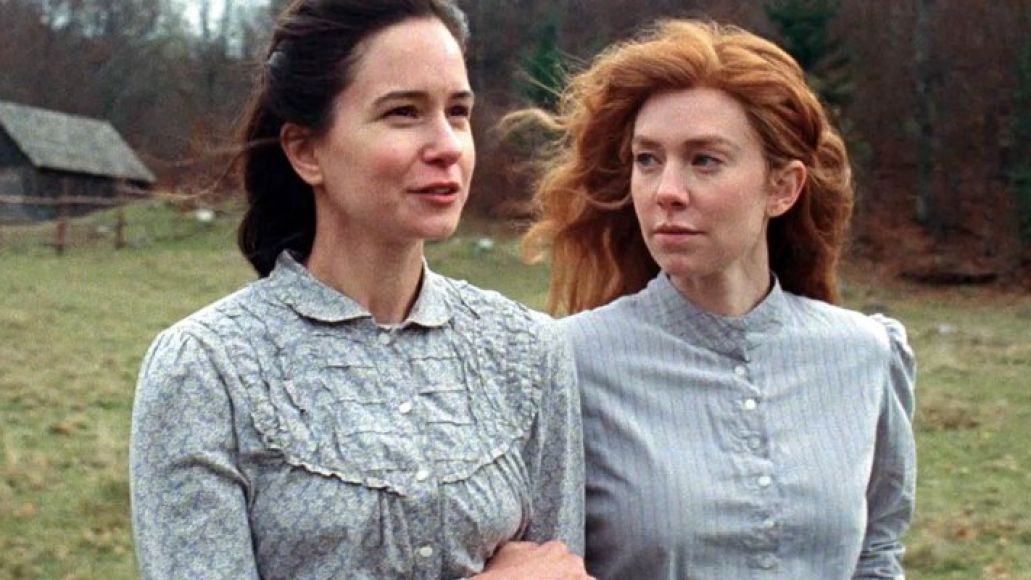 The World to Come (Sundance)

On the other hand, Finney is an emotionally abusive, controlling zealot who monitors Tallie’s every move. He tolerates Tallie’s defiance but ultimately sees her connection to Abigail as a threat. To avoid getting caught, the duo begins using their imaginations and creativity, and finds solace in each others company. Needless to say, the women have incredible romantic tension.

Fastvold choreographs these intimate scenes with empathy and compassion. One of the more tender moments is in the third act when Abigail and Tallie are relaxing in the forest. With big eyes and wide smiles, they play with each other’s hair, recite poetry to one another, and have a few laughs. In the comfort of each other’s company, they can finally discuss their goals for the relationship.

Tallie wants to use the power of her imagination to find a way out of her situation to be with the woman she loves, while Abigail wants to find a way to exist within the circumstances they’re in. It’s an intoxicating and lyrical exchange between two women who represent two sides of the same spectrum. Unfortunately, it’s the first and last time this conversation happens as the film does a complete 180 and shifts into something sinister.

The Female Gaze:There are hints of themes that could be explored in the film. Like how one uses their imagination to find happiness within the constraints of 19th-century politics, or how power in solidarity can rejuvenate one’s lust for life. The ideas are there, but they both feel circumstantial and lead to dead-ends. Instead, Shepard and Hansen are more preoccupied with torturing its characters in the last 30 minutes of the movie.

This shaky foundation, however, is leveled by Waterston and Kirby’s performances. Kirby approaches the role of Tallie with a sultry reserve, her smoky voice lending a deeply reflective and honest characterization of a woman who wants happiness outside of the system of patriarchy. While Waterston uses the character’s sense of imagination to breathe life into her character, creating a rhythm that gives Abigial a unique and somewhat eccentric identity. Indeed, a career-best.

The Verdict: At the climax, moments of happiness and tragedy are wrangled together, but there just isn’t enough time to process what’s happened before it all comes crashing down. Because of this, the ending usurps all the loving tenderness that came prior, leaving a sour aftertaste. It’s a shame, too. The performances and Fastvold’s poetic and intimate direction make it worth the watch. Perhaps next time, though, she’ll write the script.

The World to Come Struggles to Dream Beyond Its Source Material: Sundance 2021 Review