When rock and roll evolved from the harmonious sludge of ditties about loving a gal from down the street or how kids wanted to rebel against their parents, The Beatles and Stones pushed our consciousness. Those bands dared us to see the emotional and sonic boundaries via large, orchestrated movements with Sgt. Pepper’s Lonely Hearts Club Band or the smooth but malicious undertones of Let It Bleed. These two bands broke the mold. They accelerated what the culture and artform were, but even as the Stones dipped their toes in dark water, it was still palatable to the masses, selling millions. But soon, new bands pushed harder. They came at the culture like a brick to the teeth: Jimi Hendrix took us to a different plane of existence, Black Sabbath dared us to see the devil and dance with him, and Zeppelin riffed hard and heavy along to Robert Plant gyrating in skintight trousers, begging listeners to squeeze the lemon “till the juice ran down his leg.”

These bands gave rock and roll new possibilities, but the stages got higher, the piles of cocaine came in suitcases, the groupies followed in droves, and bank accounts fattened. Some guys bought castles while others wound up playing in nerd aggregate bands like King Crimson and Yes, noodling for the sake of seeing how far they could take the genre. Rock and roll became a business of image and slick sounds fueled by hot pants and cheap smack. There wasn’t any danger.

And then, in 1969, The Stooges came swinging. These kids from Detroit wanted to give you scars. They cranked their amps, opting for a dirty tone with an edge that sounded like Harleys roaring rather than the silk Eric Clapton was pumping out. The Stooges were a pack of misfits while their singer, some weirdo calling himself “Iggy Pop,” screamed at the top of his lungs, daring God to fuck with him. Throughout their three records — The Stooges, the delirious Funhouse, and their final and most important record, Raw Power — The Stooges gave the Ramones the blueprint to create what came to be punk rock. And now, celebrating 48 years, Raw Power is viewed as one of the most influential rock and roll records ever. Without it, there is no Clash, no Ramones, and certainly no Sex Pistols. (Steve Jones even admitted he learned how to play taking speed and listening to Raw Power.)

The most significant difference between Raw Power and its predecessors is the arrival of guitar player James Williamson, who joined The Stooges in 1970 as the second guitarist. When the band landed in London for their recording session, they were already a skeleton crew ravaged by heroin and dead broke. They’d already broken up once, but David Bowie had found them a label and management after seeing the impact of Pop. Raw Power was actually supposed to be a strictly Iggy Pop record, but having recruited Williamson and then trying out some English musicians who weren’t working, Williamson and Pop arranged for The Stooges’ Ron and Scott Asheton to fly over from Ann Arbor, Michigan. Ron had to move to bass.

The band worked around the clock for six months, with Iggy coming up with the iconic line of “I’m a street walkin’ cheetah with a heart full of napalm” while high as horse nuts on Chinese heroin. Because the record is so dark, the label, along with Bowie’s management, didn’t know what to do with a band releasing songs like “Your Pretty Face Is Going to Hell” or “Penetration”, complete with a maniac singer and guitar player writing these virulent riffs unlike anything happening in the mainstream. Because Williamson wasn’t restrained by Asheton’s slower, groovier playing, Raw Power is more aggressive with Iggy left plenty of room to snarl and growl. With his cherry red Les Paul Custom and Vox AC30, Williams sounds like pure rock and roll fury. When asked about Raw Power, Iggy Pop put it bluntly: “It was done with drugs, youth, attitude, and a record collection.”

Bowie’s management hated the record, of course. When The Stooges bailed from England to return to the States, Bowie had to flex his star power and mix the record, ultimately the only reason it was released. Given how huge he was coming off Ziggy Stardust and Aladdin Sane, the suits couldn’t say no. Rolling Stone understood the record saying, “There are no compromises, no attempts to soothe or play games in the hopes of expanding into a fabled wider audience. Raw Power is the pot of quicksand at the end of the rainbow, and if that doesn’t sound attractive, then you’ve been living on borrowed time for far too long.”

Raw Power is over the top, fueled by speed, lust, and whatever else the band could find to power their machine of loathing, desire, and violence. At a slim 33 minutes, the record isn’t an easy listen. Instead, it goes straight for the neck, wolf teeth exposed. It’s jagged, harsh, wiggling a finger at the listener, daring them to come into the gloom, snarling, “Gimme danger, little stranger/ And I feeeel your disease.”

The Stooges only played one gig while in London at the King’s Cross Cinema in June 1972, coming out on stage looking like a pack of psychos, wearing messy, glam-inspired clown makeup and Iggy shirtless in silver pants and black lipstick. Iggy climbed all over the audience, freaking everyone out. The band tried to tackle America, but it was a disaster, culminating when Pop attempted to fight the whole audience in Detroit and subsequently got his ass kicked by bikers. There’s a bootleg, Metallic K.O., where you can hear people screaming at the band and throwing beer bottles, which prompted Iggy to yell back, “You can throw your goddam cocks for all I care.”

After the tour went in the toilet, with their records viewed as carnival barker mayhem, the band called it quits, again. Williamson went with Pop back to LA, but Iggy descended further into drugs, which resulted in a few stints in mental hospitals. After Iggy cleaned up, Davie Bowie swooped in again, taking him to Berlin, where the two of them pumped out The Idiot and Lust for Life. The rest of The Stooges were broke and had to return to some semblance of normality. Williamson quit music and quietly got into tech, eventually working up the ladder with Sony. The Asheton brothers both tinkered in music, but neither found projects as fruitful as Iggy’s solo career.

As the years clicked by and punk proved its staying power, everyone discovered The Stooges. Fans who grew up worshiping the Misfits and Fugazi were now gobbling up Funhouse and Raw Power. We owe so much to The Stooges for their chaos, unyielding fury, and, yes, Iggy in those silver pants.

Pick up a copy of Raw Power here… 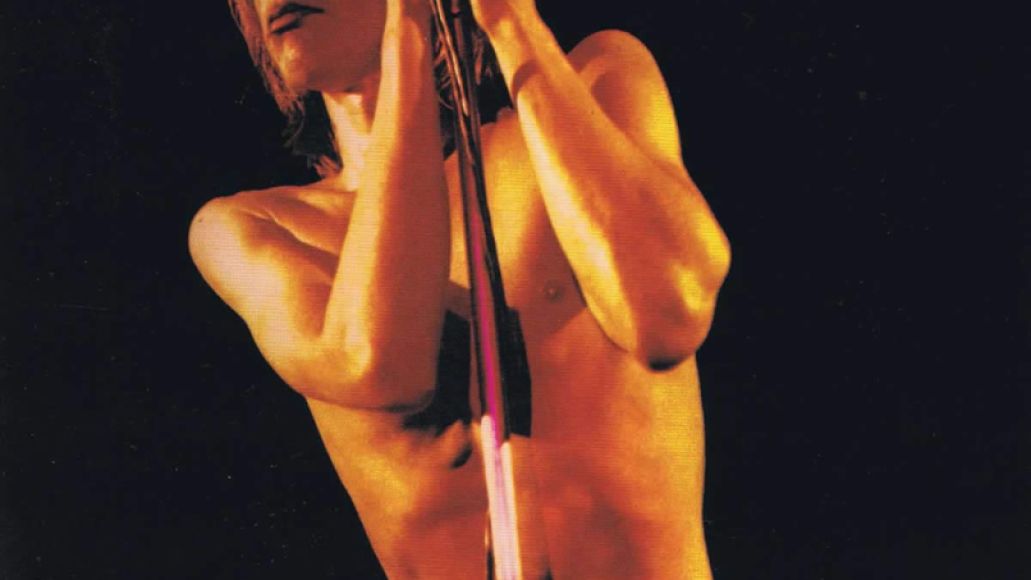