Editor’s Note: Nickelodeon’s Are You Afraid of the Dark? returns tonight with the second installment of its revival: Curse of the Shadows. This review/preview is based on the first episode of the new season. Be sure to tune in to Nickelodeon each Friday night starting tonight (February 12th) to watch the rest of the six-part season unfold.

Doddering Disclaimer: Adults my age have a lot of nostalgia tied to Are You Afraid of the Dark?. For most of us, the Saturday night Nickelodeon spooky anthology series was our first water-cooler show. And for all of us who didn’t have parents, older siblings, or cousins who were horror buffs or buffys, those tales were our introduction to the idea that being scared could actually be a lot of fun. Most of us, even as adults, can still name the episode — and we all had one — that stuck with us and kept us reaching for the light switch days, if not weeks, after it first spooked the snot out of us.

Admittedly, the early ’90s were a much different time. The Cold War had ended, Congress could balance a budget (it’s true), and television writers were making a mint coming up with 22-minute (w/commercials) tales that tip-toed that fine line between making us fall asleep with one eye open and waking our parents up all night with our screams. Shows like Are You Afraid of the Dark?, Goosebumps, Eerie, Indiana, and several others took turns creeping out a generation of kids still allowed to walk to school, bike to a friend’s house, and trick-or-treat without wearing a parental tracking device. Basically, they knocked us down a peg with a good scare once in awhile.

Ranking: Every Are You Afraid of the Dark? Episode from Worst to Best

That seemed to change post-9/11, though, and the scary children’s shows mostly dried up. In some ways, that makes a lot of sense. With adult horror anthology shows all but dead at the time, kids didn’t need the training wheels anymore. Many skipped the step altogether and simply graduated to adult horror fare earlier. Fast-forward another 20 years, and today’s kids are staring at a shit show we never thought possible: they’re living on a climatic knife edge, routinely dodging bullets in school, trying to make sense of a reality television presidency, and surviving a plague and public health scare so bad that most children are actually begging to go back to school (again, where the bullets fly). Hell, when we were growing up, supervillains wore the masks. Now, it’s mandated for everyone.

All that said, maybe it’s time that a series like Are You Afraid of the Dark? step out from the shadows to once more teach us that a good scare can be just the thing to distract us from the real perils out there. A lot of these ideas were on my mind back in 2019 when the show returned for a special three-part revival. Rather than rehash all those concerns I had as a longtime fan of the series, I’ll leave them buried in that review to be read or to rot; it’s up to you. This isn’t my Are You Afraid of the Dark? anymore. With the Curse of the Shadows as a likely template for any future seasons, it’s safe to say that it’s a new campfire reimagined for a new generation. In other words, this 37-year-old will write this review knowing full well that Curse of the Shadows wasn’t submitted for his approval at all. There’s a new Midnight Society … and it ain’t us. 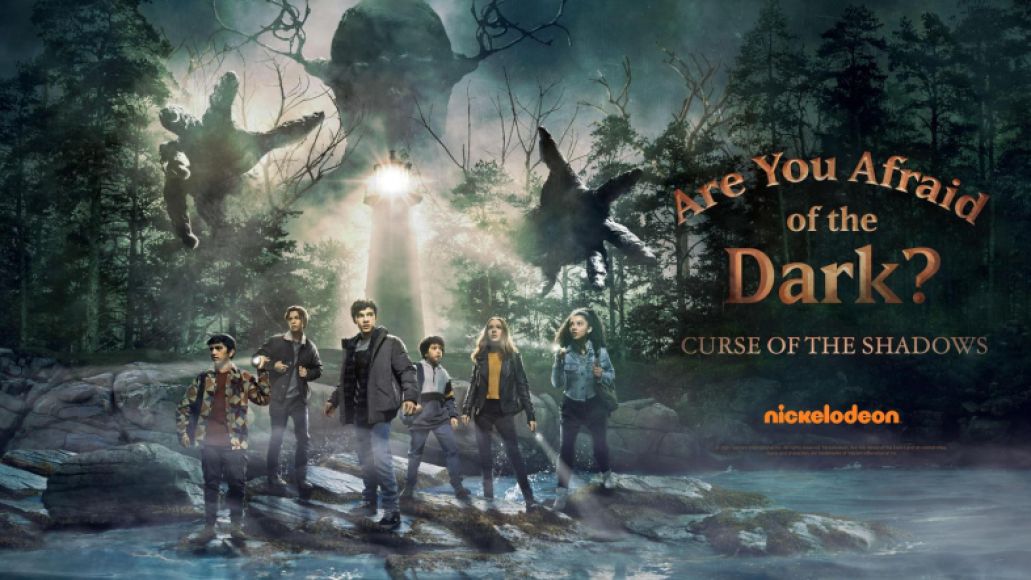 Are You Afraid of the Dark? (Nickelodeon)

Submitted for the Approval: Luke (Bryce Gheisar) awakens to find that his best friend and the leader of The Midnight Society, Connor (Parker Queenan), has gone missing the night before. The other three members of The Midnight Society — Gabby (Malia Baker), Hanna (Beatrice Kitsos), and Jai (Arjun Athalye) — set out together with Luke to solve the mystery of their friend’s disappearance. However, the only clue that they stumble upon are some chilling social media pictures and surveillance camera footage of Luke stealing a rare spell book from Sardo’s (“that’s Sar-DO … no Mister … accent on the -DO”) Magic Mansion. In both, the image of a strange, shadowy creature can be seen following Connor. According to Sardo, who technically submits the story “The Tale of the Haunted Woods” to the group, Connor is being stalked by “the shadowman,” part of an old curse that haunts their seaside town of Shadow Bay. Armed with the knowledge of what they’re up against, the group (and Hanna’s annoying kid brother, Seth) begin their mission to save Connor.

Once Around the Campfire: As mentioned above, the new Midnight Society are Connor, Luke, Gabby, Hanna, and Jai. So, what ever happened to Rachel, Gavin, Akiko, Graham, and Louise from the 2019 reboot? Gone. Forgotten. Kaput. Actually, I think we’re supposed to assume that they’re still telling stories in their MS chapter in Argento, Oregon. That said, while it’s interesting to think that Midnight Societies exist in every town (kinda like Fight Clubs) and each season can presumably focus on a new campfire gang, there is definitely something lost when having to re-establish characters from scratch each time out. It almost seems wasteful. But it also makes sense given the structure that these first two rebooted seasons have assumed. While a group of kids — like the original Midnight Society of the ’90s — can go on telling scary stories week after week, if the Society themselves, and not the characters in their stories, are going to be the main characters in these tales, we can hardly expect them to fall into a brand-new horror story each season let alone each week. After all, how many curses can Shadow Bay possibly have? It looks like it’ll be six episodes and done for this Midnight Society. Don’t get too attached.

TV Review: Nickelodeon’s Are You Afraid of the Dark? Reboot Gains Approval of The Midnight Society

This Is How We Do It Now: A lot has changed since the ’90s. Are You Afraid of the Dark? has officially scrapped its anthology roots in favor of being more like, say, Stranger Things, in that each season, despite having different characters, takes the viewer on one multi-episode adventure. In many ways, it’s following a proven formula like the one used in The Haunting of Hill House and The Haunting of Bly Manor, respectively. We also can assume going forward that the various Midnight Societies will be the ones finding themselves inside scary tales rather than simply telling them. Both these updates can work if done well, though both take the show far away from its origins. There’s a novelty and excitement to the one-off, hit-and-miss nature of an anthology series, just as a season-long tale can go places the anthology can’t. As for the idea of the Midnight Society being stars of the stories rather than storytellers, that’s a little trickier. It was an interesting twist in Season One, which only had three episodes, but there’s no real way to make the old format work if each season will be one narrative. It almost makes the whole Midnight Society angle moot.

Hey, The ’90s Called: Fans of the original show will enjoy little details like Jai’s favorite comic being The Ghastly Grinner, and it’s inspired to find ourselves not only in Sardo’s magic shop again but also in the harmless huckster’s comical company. While it’s strange to see Gary’s used car salesman in magician’s clothing (presumably outside one of his stories) as the main adult ally of this new Midnight Society, it’s too good a character to leave on the shelf forever. That said, it would have been great to have seen Richard M Dumont reprise the role of Sardo. He was absolutely magical in the part. Likewise, it’s a shame that Aron Tager, who died in 2019, never got to play kooky (kinda evil) Dr. Vink (“with a Va-Va-Va!”) one final time. Still, Ryan Beil’s own take on the frantic, easily annoyed Sardo suffices here. He might even save the series (literally and figuratively). 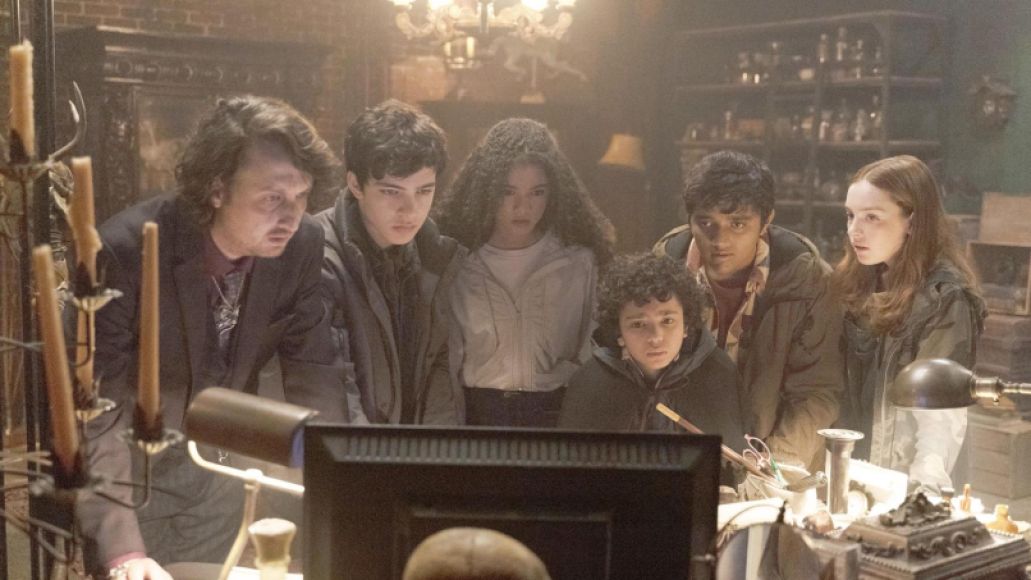 Are You Afraid of the Dark? (Nickelodeon)

Verdict: There’s a lot going for Season 2, aka Are You Afraid of the Dark?: Curse of the Shadows. The production value and acting are far better than anything we’ve seen before, and the return of Sardo, if written and performed well, should balance out the screams with some chortles. Pacing may be a bit of an issue, though. One episode into Season 2 and we more or less already know what has happened (or do we?) and what the latest Midnight Society is up against (the shadowman has been revealed several times already). It does make us wonder where both the scares and surprises will come from going forward. The good news is they have five episodes left to figure out how to do that.

Nickelodeon's Are You Afraid of the Dark? Returns to the Woods for Curse of the Shadows: Review