The Lowdown: In 2019, Lana Del Rey released Norman Fucking Rockwell! to critical acclaim, an album that integrated her long-running motifs of allusive Americana, melancholy femininity, and seedy glamor with more memorable melodies and legibility – a full execution of the vision she’d been expressing since 2012. Now, on Chemtrails over the Country Club, the singer-songwriter and pop icon continues to weave sharp referential lyrics with atmospheric set-pieces. The album is a cohesive extension of NFR!, but the sound is more overtly connected to California country-folk, built around shimmering guitars and gentle pianos. She teams up with Nashville artist Nikki Lane while name-checking her forebears Joni Mitchell, Joan Baez, Stevie Nicks, and Tammy Wynette. Del Rey still addresses tragic romance and fame, but the lyrics seem less concerned with pitching every scene into melodrama. It’s a marvelous collection of mood-songs, both cinematic and emotional, full of what the great critic Ann Powers called “that morning light quality: a woman sitting at a keyboard, singing what she needs to say.” Amid Del Rey’s public clapbacks at admirers of her performative persona – tweeting “Never had a persona” – this album seems to insist on life before and beyond notoriety.

The Good: Like the best poets, Del Rey’s content is inseparable from its form. She is the ultimate interpreter of her own lyrics, and she and producer Jack Antonoff have figured out instrumentation that provides maximum atmosphere while not drowning her voice in distortion. Her references to Laurel Canyon and “Summer of Love” San Francisco are more obvious here, but the sound doesn’t read as pastiche or parody. Del Rey, 35, has rarely sounded as robust, her vocals not submerged in a champagne bubble bath or drifting into the dusty-rose horizon. On single “Let Me Love You Like a Woman”, the title/chorus lyric is not a plea but a directive, delivered crisply, her voice uncrowded at center.

Her voice is more chameleonic on Chemtrails than any other album as she swerves from her usual delicate croon into more playful tones, background babble, and electronic harmonies, as on the memorably titled “Tulsa Jesus Freak”. The song is one of several that reference escaping LA, finding respite on windblown ranches in un-sexy places (“we should go back to Ar-kansas”). In 2019 and early 2020, Del Rey was dating cop and former host of Live PD, Sean “Sticks” Larkin, spending time in his home of Tulsa, Oklahoma (even popping up at the city’s Oktoberfest). Some of her best lines take place far from the faded sheen of Hollywood: On acoustic, sunny-harmony-laden “Wanderlust”, she sings, “I been wearing the same damn clothes for three damn days/ Lincoln, Nebraska’s got me in a haze/ The thing about men like you is that you’ve got a lot to say.”

Del Rey’s lyricism remains strong, and she mediates emotions through cinematic images, surprising references to modern Americana and light subversion. On “Wild at Heart”, she sings, “I left Calabasas, escaped all the ashes, ran into the dark…/ The cameras have flashes, they cause the car crashes, but I’m not a star/ If you love me, you’ll love me/ Because I’m wild, wild at heart.” Those lines conjure a David Lynch remake starring any number of Kardashians set amid the West Coast’s ever-lengthening fire seasons. The song even samples her own song from NFR! – what’s more America 2021 than sampling oneself?

“Dark but Just a Game” sounds like a beguiling combination of ’90s Fiona Apple and Beatles piano-pop over a light beat. The song was reportedly sparked by a party Del Rey and Antonoff attended – “Something happened … don’t meet your idols,” she told MOJO – that dropped another bloom from the rose of fame. Another song that makes more incisive observations about the industry is album opener “White Dress”. Built around a simple piano and Del Rey’s high-strained whisper, the song is a portrait of a complex, formative moment in the musician’s young life: “When I was a waitress, wearing a tight dress, I wasn’t famous … Down at the Men in Music Business Conference/ Down in Orlando, I was only 19 … I only mention it ’cause it was such a scene/ And I felt seen.” It’s a complex dynamic that recurs regularly in Del Rey’s lyrics — the limitation and high of attention from powerful men — and the shades of power that swell within that gaze. It’s complicated and her music always errs on the side of romanticizing rather than condemning.

The Bad: To be honest, the only things Del Rey seems interested in condemning in recent days are an unforgiving spotlight and her own potential haters. Though Chemtrails does not address the controversies spurred by Del Rey’s social media posts and press statements since NFR!, it’s impossible to ignore in the context of a new release. I’d prefer not to write about how she lashed out on social media, defending herself against criticism and praise alike – often baffling audiences with public takes on feminism, abusive relationships, Black Lives Matter protests, diversity and inclusivity, Trump’s complicity in the Capitol attack, and the existence – or non-existence – of her own persona. It’s difficult to reconcile the emotional-intellectual cohesion of Del Rey’s music and performance with the repeatedly tone-deaf, defensive, haphazard, and sometimes harmful nature of her public posts.

It’s tempting to search for echoes of Del Rey’s social media in her music, spinning out with questions like: Is it significant that Chemtrails over the Country Club references both a government conspiracy theory and elite white social institutions? Is it a coincidence that one review’s tepid comparison between her songwriting and that of Joni Mitchell is followed by this album, which closes with a cover of Mitchell’s “For Free”?

I want to write about the art and not the celebrity. Del Rey wants to write her romances without everyone making it political. But neither of us live in those vacuums, nor can we pretend we do. Del Rey’s actions as a celebrity and her artistic choices flow through each other. When you maintain a platform as massive as hers, to quote her own songs – you “ain’t no candle in the wind.”

The Verdict: Chemtrails over the Country Club is a gorgeous listen: charming, clever, and vulnerable. Del Rey is as effective as ever in painting American fantasies, evoking nostalgia for realities always out of reach. For all her allusions, she recalls Whitman – the potent and contradictory center of her own iconography. She may sing about escaping fame, but she’s also finely attuned to the fact that tragedy is sweeter if you never escape and sweetest if you gilded the cage yourself.

Essential Tracks: “White Dress”, “Chemtrails over the Country Club”, and “Let Me Love You Like a Woman”

Pick up a copy of Chemtrails over the Country Club here…

Chemtrails over the Country Club Artwork 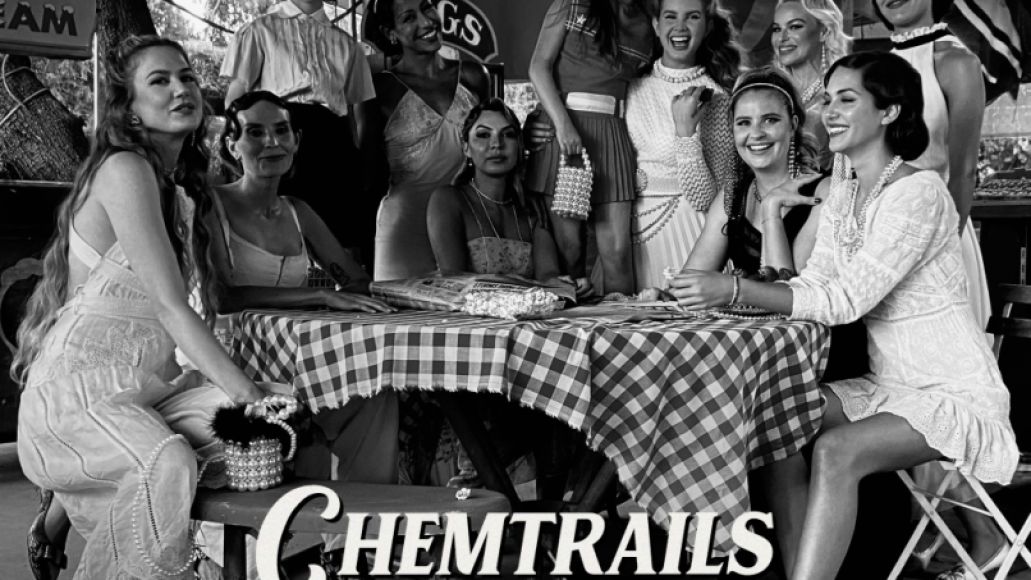 Lana Del Rey Strips Back the Glamour on the Charming Chemtrails over the Country Club: Review