This week, Flying Lotus made headlines not for music, but for visual arts; on Wednesday, the electronic producer shared the first images of his long-simmering Netflix anime series, Yasuke (starring LaKeith Stanfield as Japan’s first African samurai), across his social media accounts. Initially announced in 2018, Yasuke is the latest in a recent string of crossovers between the worlds of Western popular music and Japanese animation, joining fellow Netflix projects such as 2017’s Neo Yokio (from Vampire Weekend’s Ezra Koenig) and 2020’s Sturgill Simpson Presents Sound & Fury. It, like those other series, also owes a debt to Daft Punk, whose seminal record Discovery celebrates its 20th anniversary this week as well.

In addition to popularizing French house and salvaging disco’s mainstream reputation, Discovery also had a hand in cementing anime’s crossover appeal within the world of Western pop music. As such, a celebration of the record’s milestone birthday wouldn’t be complete without commemorating the anime that accompanied it: 2003’s Interstella 5555: The 5tory of the 5ecret 5tar 5ystem. Conceived as a pop-star pipe dream, produced by a Japanese animation legend, and beloved by a generation of fans, the film also holds a few secret insights into the subsequent career trajectory of the world’s most famous French robots.

First, some history. Anime music videos were nothing new in 2001, at least not among those within the fandom. The genre got its apparent start in 1982, when Fairleigh Dickinson student Jim Kaposztas made a supercut of violent scenes from Leiji Matsumoto’s Space Battleship Yamato set to The Beatles song “All You Need Is Love”. AMVs, as they came to be called, flourished among the fandom in the ensuing decades, made unofficially using both existing footage and fan-drawn animation to accentuate their chosen songs. Lacking anything in the way of rights clearances, these videos often traded legal distribution for cult wish fulfillment; in the case of the legendary opening video for 1983 anime convention DAICON IV, that meant scenes with Godzilla, Darth Vader, and Spider-Man play out while the Electric Light Orchestra’s extremely unauthorized “Twilight” plays in the background.

While the pairing of popular music with Japanese animation became common among anime fans, the Western music world was slow to reciprocate. When anime did appear in the music videos of the United States and Europe (such as the videos for Matthew Sweet’s “Girlfriend” or the Michael and Janet Jackson song “Scream”), it was generally relegated to use as window dressing. Like most AMVs, these videos also made use of footage from existing series rather than all-new animation.

Daft Punk Are Calling It Quits

Then came Interstella 5555. In this dialogue-free Daft Punk visual album, an intergalactic pop band from an unnamed planet is kidnapped and brought to Earth by a nefarious record mogul (and secret alchemist) whose plot for world destruction involves wringing gold records out of enslaved alien musicians. Over the course of a tight 66 minutes set to the music of Discovery, the film packs in a tragic rescue mission, a trip to a ghoulish castle, and a spacefaring homecoming aboard a starship shaped like a Gibson Flying V before revealing that the whole thing was just the dream of a very young (and very sleepy) Daft Punk fan. 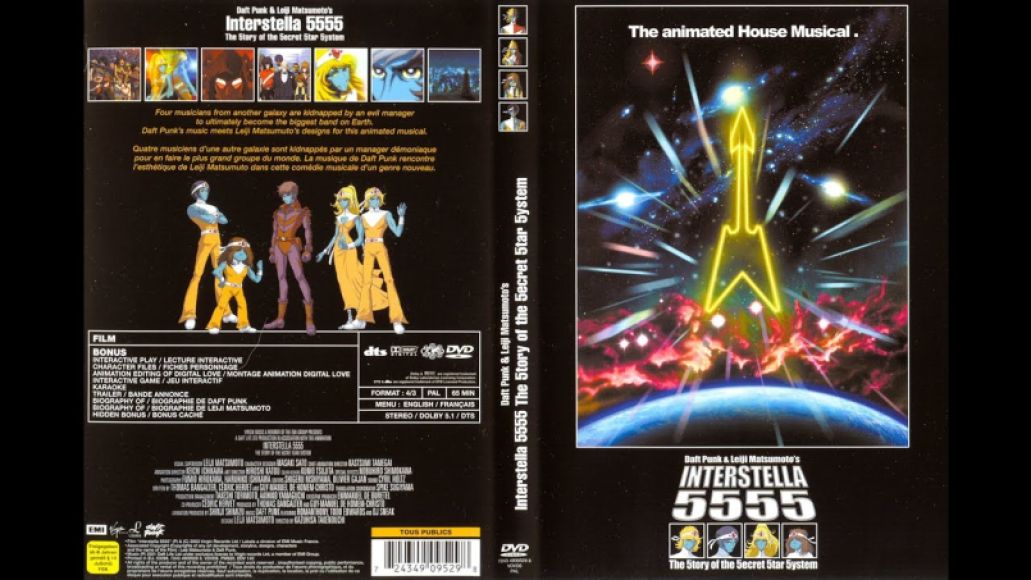 The project was originally released in two parts; the segments covering “One More Time”, “Aerodynamic”, “Digital Love”, and “Harder, Better, Faster, Stronger” debuted during a special edition of Cartoon Network’s Toonami Midnight Run on August 31st, 2001, with the complete film debuting at Cannes on May 18th, 2003.

The first-of-it-kind collaboration that produced Interstella 5555 brought together two sets of generational talents in their respective fields. On one side, there was Daft Punk, the young French house legends in the making. On the other sat Matsumoto, the creative mind behind Toei Animation hits of the ’70s and ’80s including Space Battleship Yamato, Galaxy Express 999, and Space Pirate Captain Harlock. After seeing his work used in the very first AMV, Matsumoto was about to add another history-making imprint to the intersection of anime and popular music.

The work on Interstella 5555 was also the culmination of a multi-decade chain of influence between the nations of its two principal artists. In a 1996 interview with Animerica, Matsumoto described his boyhood fascination with French films of the 1950s such as Marianne De Ma Jeunesse, whose star, Marianne Hold, became a visual inspiration for characters including Space Battleship Yamato’s Yuki Mori and Maetel of Galaxy Express 999. Three decades and 6,000 miles away, Matsumoto’s retrofuturistic space operas had a similar impact on Thomas Bangalter and Guy-Manuel de Homem-Christo, who used their newfound fame and resources as a chance to work with a childhood hero.

“When we were children, Japanese animation was really big in France, so we’ve been loving it since we were five or six years old,” Bangalter said in a video interview that appeared with the Japanese deluxe edition of Interstella 5555. “This is a big present from Paris and Tokyo, and we hope you like it.”

The Past, Present, and Future of Daft Punk’s Homework

The influence of animation wasn’t limited to the film itself; Daft Punk’s love of Matsumoto’s work (in particular, the adventures of Captain Harlock) acted as a central influence on the music that became Discovery. Arriving four years after their breakout record, Homework, the duo’s sophomore album was their first since adopting the robotic personas that would become their trademark. In addition to providing some much-desired anonymity to a pair of rising stars, this new life behind the mask also gave them the artistic detachment needed to consider the same questions of human joy and emotion at the heart of Matsumoto’s greatest works.

To rediscover that humanity, Bangalter and Homem-Christo returned to their childhood, filtering memories of the favorite cartoons and ambient disco hits of the era through their newfound techno-organic filter. The result is an album preloaded with longing and an instant nostalgia of the type that usually comes years after the fact. Much like Tetsuro, the Galaxy Express 999 protagonist on a quest for an undying machine body, Discovery finds the duo coming to accept, appreciate, and accentuate the fragile humanity and the fullness of feeling that comes with it. The record pulses with its own kind of cinematic motion, one that propels itself with shimmering funk samples and Vocoder instead of an intergalactic steam engine but reaches the same destinations nonetheless. Even if the collaboration with Matsumoto hadn’t materialized, it’s easy to imagine an AMV maker pairing songs like “Face to Face” or “Superheroes” with scenes from his work anyway.

One More Time, Twenty Years On

Twenty years after its release, we’re still feeling the pop cultural impact of Discovery and Interstella 5555. Greeted as a cool, if unexpected, novelty at the time, the film is now rightly hailed for its significance in advancing anime’s crossover appeal to Western audiences, especially in America. The film heralded anime’s impending arrival in the mainstream, as well its greater reach within Western music, whether in videos from acts Linkin Park and The Weeknd or bars from rappers like Thundercat and Open Mike Eagle.

Thanks to their premiere on Cartoon Network, the initial segments of Interstella 5555 also acted as a legitimizing musical gateway for young anime fans. Writing for Slate in the wake of Daft Punk’s retirement announcement in February, critic Allegra Frank spoke of staying up past her bedtime to see videos that captivated her in much the same way Matsumoto’s work grabbed the boys who would become Daft Punk two decades earlier.

“The pairing of the visuals and the music was astounding at the time, something that I, as an elementary schooler, had never conceived of,” Frank said. “Anime, my favorite thing, could be set to … real, popular, legitimately great English-language music? Who knew?”

Speaking of that retirement: rewatching Interstella 5555 now also drives home the uncompromising (if occasionally frustrating) integrity with which Daft Punk approached their subsequent career. “What we consider success is being able to enjoy ourselves, and have fun making music,” Bangalter said upon the film’s release, when it was unthinkable that the duo’s career would come to a close with just two more albums and one international tour to their name. Despite reaching levels of critical and popular adoration unrivaled by most of their dance music peers, Bangalter and Homem-Christo avoided giving themselves over to the commercial temptations that drove the villain of their story. Instead, they seemed to take a page from Captain Harlock himself; in that same Animerica interview with Matsumoto, the titular space pirate is described as “[living] by Matsumoto’s ideal of how life should be lived — under debt to no man, no cause, and with no code to guide him but his own.”

Sounds familiar, right? Whether it was retaining their anonymity, refraining from over-touring, or refusing to release undercooked material for the sake of contractual obligations, the men of Daft Punk used their fame to rewrite rules rather than play by them. A final version of that ethos might read something like the following: create music for pleasure instead of obligation, honor the influences that made us what we are, and know when it’s time to ride off into the starset.

The Defining Influence of '70s Anime on Daft Punk's Discovery