The Pitch: High school junior Vivian (Hadley Robinson) is struggling to find her voice. In response to rampant misogyny and lack of support from her school’s administration, she takes inspiration from her mother’s Riot Grrrl past and creates an anonymous zine called Moxie, attempting to unite students under a banner of feminism. But like many before her, Vivian learns that effective feminist activism requires more than buzzwords and good intentions.

Director Amy Poehler attempts to pass the torch from third to fourth wave feminism and delivers an empowering and cathartic look at the complexities of Girl Power. Adapted from Jennifer Mathieu’s inspirational novel, Moxie is a love letter to young people struggling to find their own voices and create the changes they want to see in the world.

Rebel Girls: Inspired by her mother, Lisa’s (Poehler) own teenage activism and Bikini Kill’s iconic song, “Rebel Girl”, Vivian takes action after an anonymous list is posted to social media ranking the school’s female students by their appearance and perceived attitude. The disgusting categories include Best Rack, Most Obedient, and Most Bangeable. Equally disturbing is the administration’s flat out refusal to do anything about it. Fed up, Vivian publishes her zine anonymously sparking new friendships and activism, such as dress code protests and schoolwide walk-outs. True to life, these actions yield varying and often frustrating results, but Vivian and the new Moxie club are committed to moving forward showing a willingness for self-reflection that was arguably the key to undoing past feminist movements. 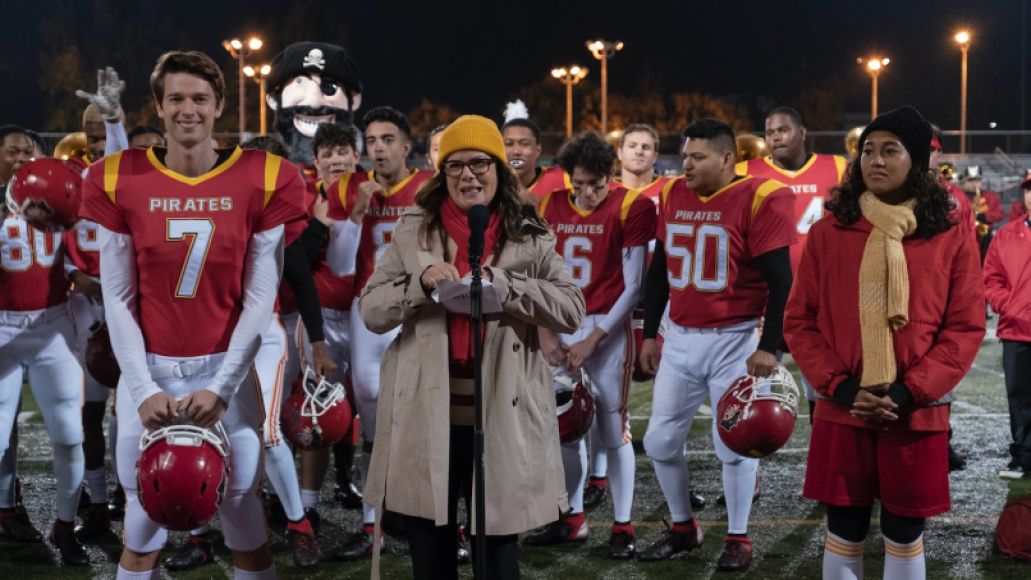 The Patriarchy: The Patriarchy is presented with infuriating authenticity through school jock Mitchell Wilson (Patrick Schwarzenegger). Weaponizing his privilege, Mitchell mocks, interrupts, and touches female students without their consent, laughing off their concerns and minimizing their feelings when they object. A true narcissist, he flips everything around to serve his own needs and dismisses anyone who doesn’t play along as either difficult or insecure. His current target is Lucy (Alycia Pascual-Pena), a new student immune to his familiar brand of bullshit. She is quick to point out that while everyone else may laugh off Mitchell’s behavior, dismissing his actions as simply annoying is overlooking dangerous dehumanization.

When Lucy reports this harassment, she quickly learns that Principal Shelly (Marcia Gay Harden) prefers to let her female students continue to be victimized rather than rock the boat, thus essentially supporting his abhorrent behavior. She dismisses the demeaning List as “sticks and stones” social media and English teacher Mr. Davies (Ike Barinholtz) refuses to state an opinion about a sexist dress code because it’s a “woman’s issue.” Poehler calls out this variation of rape culture, making clear that the responsibility should be on boys to treat women with respect rather than on girls to ignore their harassment. By refusing to take a stand, Shelly and Davies are essentially giving Mitchell permission to continue victimizing women in increasingly dangerous ways. 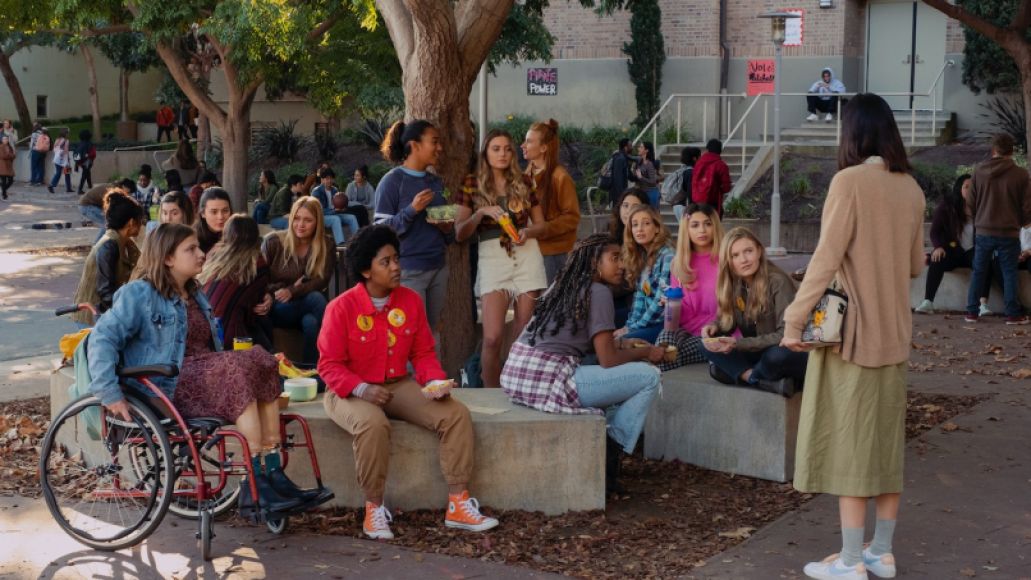 Intersectionality and Inclusivity: Arguably the biggest mistake plaguing earlier waves of feminism was a lack of intersectionality and cultural sensitivity. Moxie attempts to reckon with this history through a diverse cast and acknowledgement of varied and complex oppression. Non-white characters explain to their white friends how Black women experience a different kind of objectification due to racial stereotypes. Also represented are the unique challenges faced by members of immigrant communities who do not have the same risk taking freedom that Vivian does.

However, the focus is heavily on racial inclusion with little attention given to queer and disabled representation. Poehler alludes to trans and queer stories but never fully develops them. Similarly, a character with prosthetics is present in many scenes, but never interacts with the other students in a meaningful way. She’s treated with respect, but her inclusion in the story feels more like checking a box than an authentic attempt at representation. 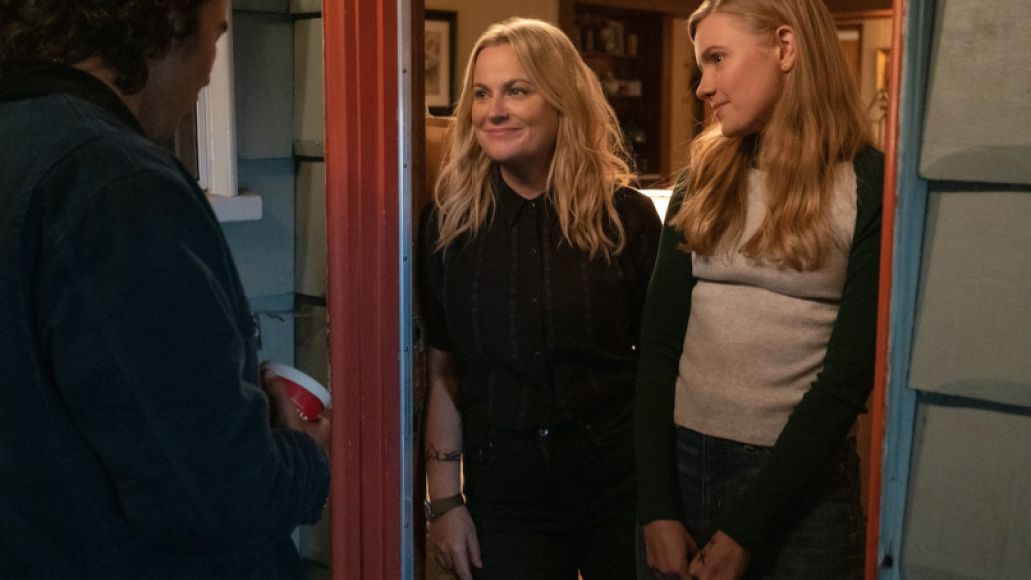 White Feminism: Moxie confronts the toxic side of white feminism through Vivian. She lights the match that starts the revolution, but she does so anonymously. It’s an apt commentary on many white feminists whose skin color allows them to safely navigate a variety of circles in a way non-white women cannot. Their privilege allows them to choose when and where they want to be “political” and affords them the ability to hide within the dominant culture when speaking out would be too risky. There are legitimate reasons for remaining anonymous when challenging such a powerful system, but Poehler makes clear that Vivian has a responsibility to use her privilege to not only help herself, but to amplify marginalized voices who don’t have access to the same platforms and resources.

Allies and Co-Conspirators: Vivian’s boyfriend Seth (Nico Hiraga) is an endearing example of effective male allyship. He supports Vivian but honors her wish to stay anonymous even when he disagrees. He participates in protests and offers to spread the word to his male friends, thus giving them permission to enter the conversation as well. He steps up and acts when he sees an opportunity to do so, but never tries to guide the conversation. It’s a welcome change from men who would either dismiss feminism outright, or try to signal their wokeness by taking charge and overpowering female voices. Seth is not just an ally, he’s a co-conspirator. 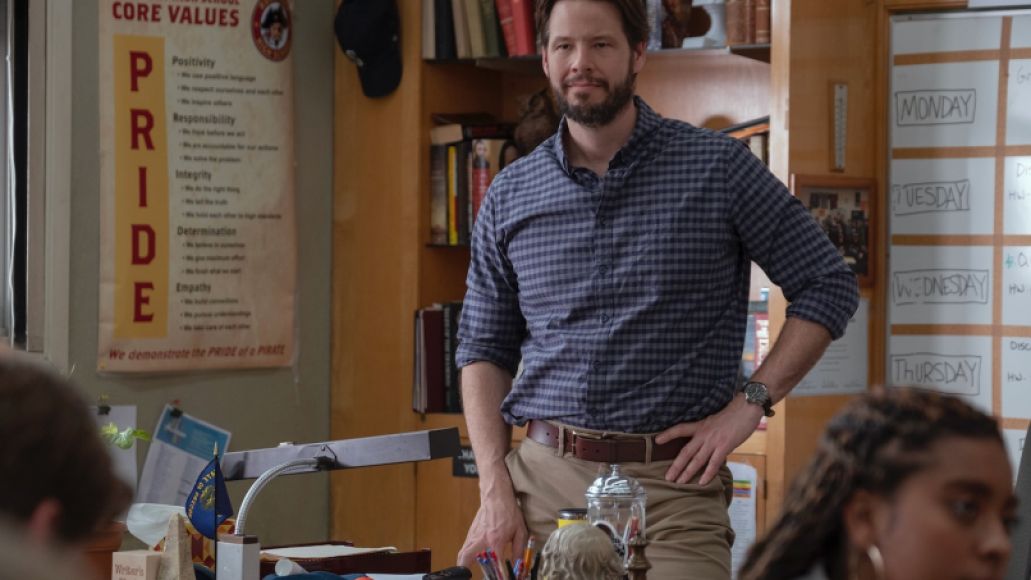 Finding Our Voices: In its most powerful scene, Moxie concludes with a moment of catharsis culminating in a young woman reporting her sexual assault publicly for the first time. It’s a stunning moment of visibility and will likely be uncomfortable for any survivor who’s ever had to decide how to come forward. But it’s also empowering. She is given the space to share her story on her own terms. She is not questioned and her report is met with immediate action. It’s an example of showing the world we want to see rather than the one we have that is simultaneously inspiring and heartbreaking. Though perhaps naive, this scene holds space for hope that a new generation of feminists will lead us into a future where women can safely say hard truths out loud.

What’s Streaming on Netflix in March 2021

The Verdict: Moxie is an inspirational and cathartic journey, representing a dilemma most feminists have faced at one point in their lives. The question of how to use our voices is an important one and Moxie shows that the answers are as varied as the women and men making them. But it’s also an honest look at the challenges and frustrations on the road to gender equality.

The roots of the patriarchy are deep and we will likely not live long enough to see it completely destroyed, but we can’t afford to do nothing. Moxie gives feminists, new and old, permission to make mistakes along the way, but requires fearless reflection on the impact of our actions. It won’t be easy, but we can keep moving forward together if we are brave enough to try.

Where’s It Streaming? Netflix. Wednesday, March 3rd. Be there.