The Pitch: It’s another SpongeBob movie—what do you need, a road map? Actually, maybe: This newest adventure is an underwater road trip, with SpongeBob (Tom Kenny) and his starfish pal Patrick (Bill Faggerbake) on a mission to save Gary, SpongeBob’s beloved pet snail, who’s being used as part of a skincare regimen for King Poseidon (Matt Berry). This snailnapping was engineered by the scheming Plankton (Mr. Lawrence), who wants SpongeBob to stop (inadvertently) interfering with his plans to ruin the Krusty Krab, the restaurant where SpongeBob happily toils away. There are also two different robot assistants, one amusingly voiced by Awkafina.

A Brand New Sponge: This is the third SpongeBob film, following 2004’s The SpongeBob SquarePants Movie and 2015’s The SpongeBob Movie: Sponge Out of Water. It’s not a reboot—the core voice actors remain the same, and writer/director Tim Hill has worked on both the TV show and the films—but it is the first SpongeBob movie that uses exclusively CG animation. (The last movie only switched to CG when its characters entered the live-action world.)

While that sounds potentially nightmarish, given the show’s idiosyncratic 2D charms, it turns out to be a novel and eye-pleasing change. It uses an intentionally choppy style reminiscent of The Lego Movie, which gives the familiar characters a bit of faux-stop-motion texture, rather than computer-generated slickness. Purists may shudder, but it’s pretty fun to look at, especially when the heroes confront Poseidon in the bright lights and seedy attractions of the Lost City of Atlantic City. 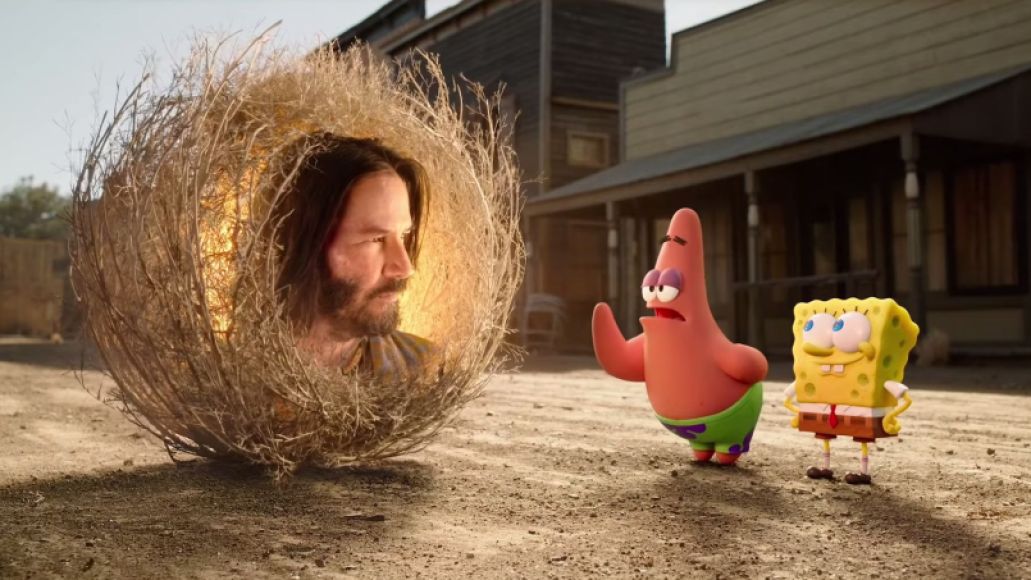 The SpongeBob Movie: Sponge on the Run (Paramount+)

Whoa: Sponge On the Run also features Keanu Reeves, in which seems, at first, like a fun one-scene cameo but turns into a full-on supporting role. He plays Sage, so-named for his sage advice as well as his (live-action) face materializing in a ball of sage, and he counsels SpongeBob and Patrick to stay on task as they search for Gary. Why does Sage appear to them in the first place? Well, they’re in a mostly-live-action Old West-style town populated by zombie cowboy-pirates, which the friends first assume is a long dream, but turns out not to be, and … honestly, it’s not really clear, and a cutesy Snoop Dog cameo doesn’t help.

Even for a freewheeling cartoon adapting a shorter-form kids’ cartoon, Sponge On the Run rambles on at times. Instead of using the road trip to impose some nominal structure on the characters’ antics, it lampshades the subgenre’s formulas, rushes through some half-assed sorta-lessons, and takes a lot of detours that are sometimes more lengthy than fun. Is this movie following its creative whims and maintaining a sense of short-attention-span play for its young audience, or is it just kind of slapped together? 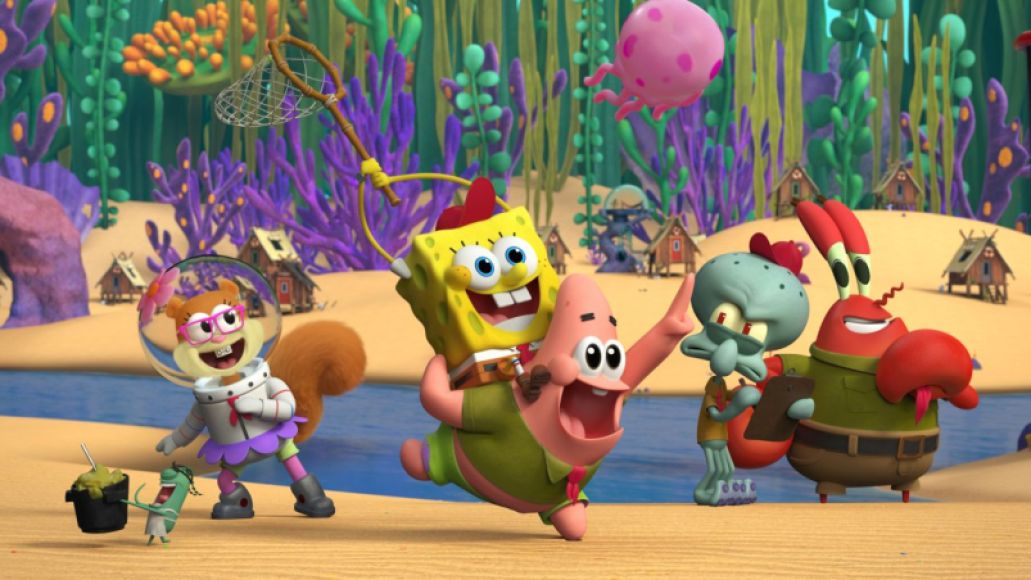 The SpongeBob Movie: Sponge on the Run (Paramount+)

Stay Tuned: What ultimately tips Sponge On the Run from agreeable silliness into feeling slightly mercenary is its use of flashbacks to the childhoods of SpongeBob, Patrick, Squidward (Rodger Bumpass) and squirrel Sandy (Carolyn Lawrence). Apparently they all met at summer camp, which happens to be the setting for Kamp Koral, a new prequel/spinoff series about the characters as kids, which premieres simultaneously on Paramount Plus. The flashbacks are cute enough, but they don’t add much to the narrative, and feel like an attempt to reverse-engineer Muppet Babies, the Saturday morning cartoon based on a beloved sequence from The Muppets Take Manhattan.

The Verdict: SpongeBob fans of all ages will find plenty to like about Sponge On the Run: It’s funny, well-animated, and high-spirited. But it’s ultimately more of a franchise play than a creative endeavor.

Where’s It Playing? The SpongeBob Movie: Sponge On the Run is out on Friday, March 5th on VOD and the new Paramount Plus streaming service.

The SpongeBob Movie: Sponge On the Run Is a Total Franchise Play: Review