The rallying cry of DC fanboys for nearly half a decade, Zack Snyder’s original version of the DC cinematic universe’s Avengers equivalent before studio meddling and a tragic death in the family led the oft-maligned director to step away and let Joss Whedon get his grubby, quippy little hands all over his self-serious, baroque baby. The 2017 version was visibly, obnoxiously, the product of two directors with warring approaches wrestling with a single project: Snyderesque aesthetics clashed mightily with repetitive, snarky repartee that didn’t seem to befit the DC verse’s grumpiest heroes. It was a bit more fun, but incredibly uneven, and featured one of cinema’s most horrifying upper lips.

But now, amid enormous, organized fan fervor (and the well-documented online harassment of critics and skeptics, which the release of the film worryingly normalizes) and a coronavirus pandemic that gutted the movie industry and sent streaming services clamoring for premium content, HBO Max and Warner Bros. have thrown $70 million at Snyder’s way to finish the version of the film he set out to make in the first place.

Don’t Count On It, Batman: The bones of the story are the same as in 2017’s: A big silver baddie named Steppenwolf (Ciarán Hinds) searches for the Mother Boxes, three ‘change engines’ that he seeks to use to destroy the world and remake it for his own purposes, forcing Batman (Ben Affleck) to gather a team of superheroes — Wonder Woman (Gal Gadot), The Flash (Ezra Miller), Aquaman (Jason Momoa), Cyborg (Ray Fisher) and, eventually, Superman (Henry Cavill) — to stop him.

But with the added runtime and Snyder’s original plans restored, the details are dramatically different: characters’ motivations are more fully fleshed out, entire members of the team get more to do, and the story is stretched to lend more pretense and grandeur to it. It may not be a miniseries anymore like was originally planned, but Justice League helpfully splits its grandiose four-hour story into six chapters — each with its own ostentatious subtitle, like “Your Father Twice Over” — so you can watch it like TV if you like. (Your bladder will thank you.) 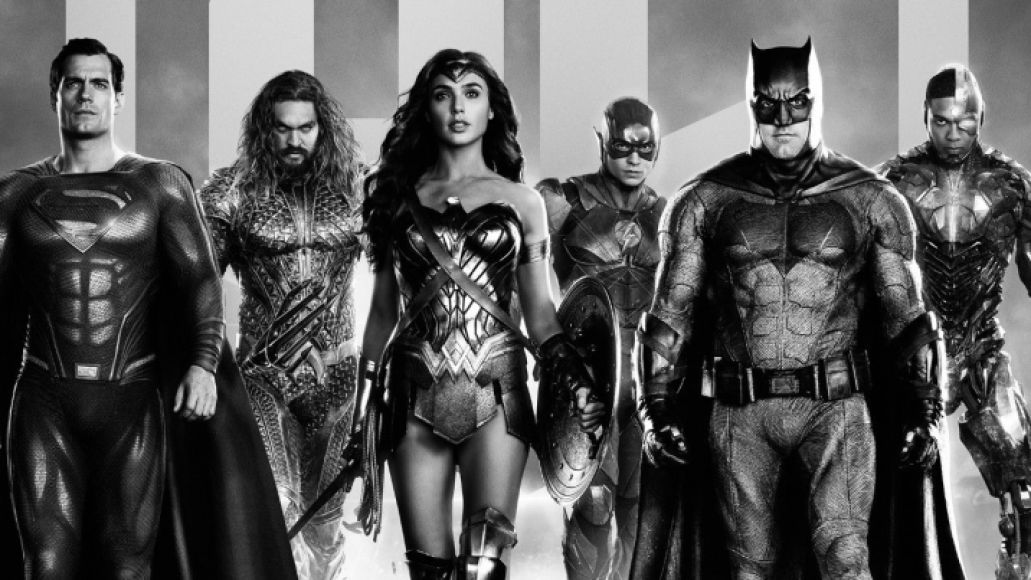 You won’t find a whit of Whedon’s whimsy in this version of the film. Snyder practically rips out every self-referential witticism or goofy sight gag he brought in (bye-bye, that awkward moment when Flash lands on Wonder Woman’s boobs! Arrivederci, the trite Russian family who lived near Steppenwolf’s Russian nuclear stronghold!). Flash and Cyborg still dig up Supermans’ body in real time, but a well-placed remark (“You know we could do this in a nanosecond, right?”) and the accompanying, loaded silence make the gesture more powerful — the slow labor is the point.

The result is something much more operatic in intent, even if it doesn’t wholly work: Miller’s Barry Allen is still a mugging quipster, but his anxious optimism feels like a refreshing contrast to everyone else’s glower, rather than the typical Joss Whedon Funny Sidekick. It may not achieve the giddy comic-book fun of Marvel, but it feels like its own animal, and a bit more cohesive as a result.

He Will See My Worth Again: The story itself remains glorious nonsense, but the nuts and bolts at least make more sense now, and each member of the League gets more interesting things to do. Gadot’s Diana raids a tomb for info on the Mother Boxes while wearing six-inch heels and a trenchcoat; Barry saves Kiersey Clemons’ life in his introduction; Arthur Curry gets not one, but two virtually identical scenes where he connects with his Atlantean brethren/future co-stars of his solo film to talk about his upcoming struggles for the throne. (Willem Dafoe’s version of Valko here sports an incredible mane of long hair.) There’s no CG Cavill lip to be found, and he even gets a few more moments post-resurrection to reconnect with Amy Adams’ Lois Lane and Diane Lane’s “Save” Martha Kent.

But the biggest improvements to the story come with Justice League‘s two chrome-clad boys: Steppenwolf and Cyborg. The former is still the main baddie, but his motivation and look have been changed dramatically; rather than the generic-looking cave troll of the 2017 version, ol’ Step is now a brutalist minotaur with armor made entirely of morphing silver shards that shift and jut out as the situation demands. Rather than worshiping the Mother Boxes, this Steppenwolf is a spurned acolyte of world-ending despot Darkseid (who makes a few cursory appearances), hoping to conquer the Earth to make it up to the master he simps for. Cyborg, for his part, feels much more the heart of this version of Justice League; rather than the mopey sad-sack of Whedon’s cut. Fisher gets much more screentime to explore the alien-ness of his new being, and how it affects his relationship with his scientist father, Silas Stone (Joe Morton, here much more than a glorified cameo). 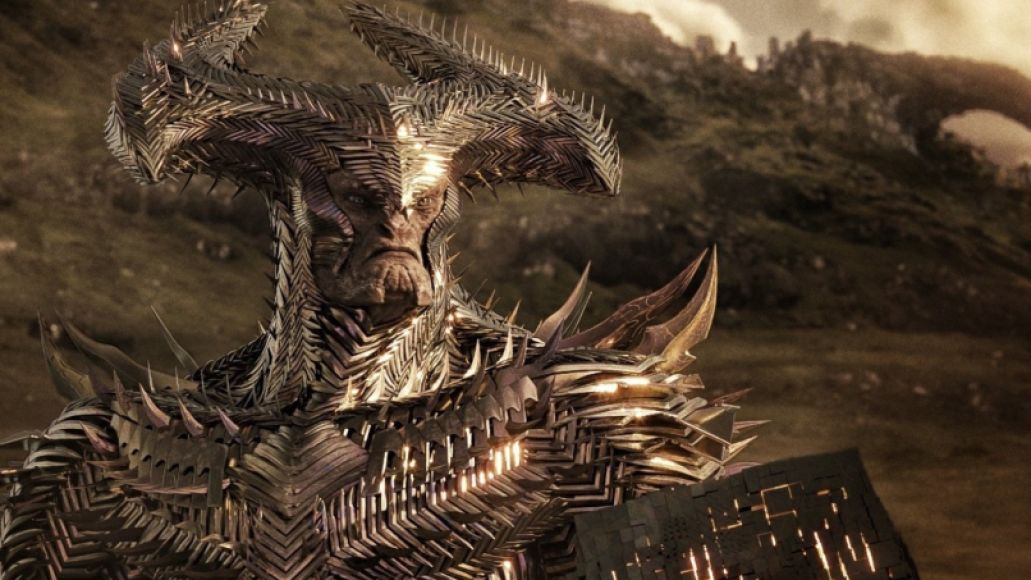 With the added space to explore it, there’s also more of a thematic throughline here than Whedon’s Saturday morning cartoon, with a few more meditations on grief and trauma (a superhero property exploring trauma? Call the New York Times!) underpinned by a yearning desire for our protagonists to reconcile with their new realities. At least here, everyone gets to touch on their longing for home and normalcy — Wonder Woman pines, though great distances, for her sisters on Themyscira, while Arthur grapples with his deliberate rejection of his throne. That said, some of these moments get swallowed up in the repetition and bloat of it all, and there are moments in the first and second acts that feel included to pad out the run time. You don’t have to put everything in, Zack; sometimes, less is more, even when your goal is simply more.

“It’s Toxic… That’s Good”: I’ll say this for Zack Snyder’s Justice League: It may be the purest distillation of Snyder’s concerns and stylistic tics as a filmmaker. I don’t even mean that in a bad way; say what you will about the hokiness and self-seriousness of the scripts (and Justice League‘s is no exception), Snyder has one of the most interesting visual eyes in blockbuster filmmaking. Every shot, every emotion is amped up to 11, every sweaty Amazon swinging a hammer or speed-ramped superhero move captured by Fabian Wagner’s ostentatious 4:3 frame in a testament to Snyder’s love for maximalism. Tom Holkenborg’s booming, percussive score feels much more simpatico with Snyder’s approach (the callbacks to Zimmer’s Man of Steel score are incredibly welcome) than Danny Elfman’s lazy reprises of the old Burton and Donner themes in 2017.

Granted, these improvements should be graded on a curve. Zack Snyder’s Justice League is hardly the full-on revolutionary redo of the original that makes it the best superhero film ever made, and everything you love and hate about his works is all right here. Four hours is bloated, even beyond the scope of what Snyder wanted to do, with repetitive scenes and indulgences galore. (Get ready for a lot of Nick Cave songs on the soundtrack.) And whatever goodwill the previous three and a half hours have built up will be massively tested by a 20-minute epilogue that offers up more teases for a non-starter sequel, and decidedly unwelcome cameos from the DCEU’s most polarizing characters, than you can shake a society at. 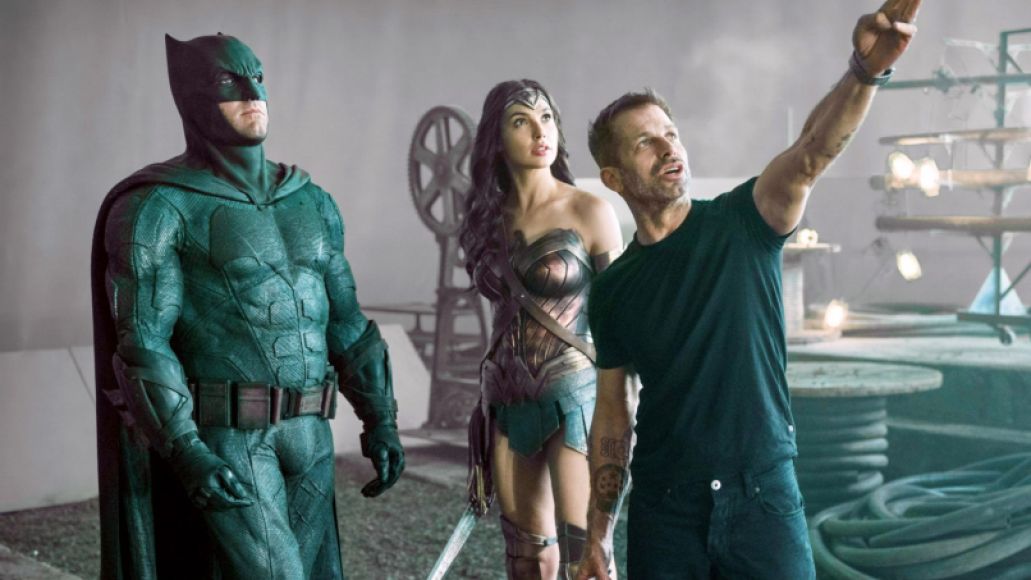 But considering the Frankenstein’s monster we got a few years ago, and a pop culture that’s seemed to gravitate more towards Snyder as an interesting stylist and pushed away from the witty, but formless Whedon (especially in the wake of allegations of abuse and harassment, whether on the set of Justice League or off), this could have gone way worse. Snyder is less a deconstructionist (much as he’d like to think) of the superhero mythos as he is a celebration of superheroes’ outsized place in our own modern mythology. There’s a reason he films Superman like he did Leonidas in 300; in his eyes, their power and kaloskagathos are one and the same. Frankly, I’d rather watch a messy, earnest exercise in baroque craft than a half-formed golem uncomfortable in its own skin.

The Verdict: While I’m really not happy about how we got here (fewer world-endangering pandemics and frothing fanboy mobs in my future, please and thank you), the work is here now, and we must reckon with it. And honestly, as someone who’s attracted to ambitious messes, I look at Zack Snyder’s Justice League with the same kind of fascination I have for David Fincher’s Assembly Cut of Alien3. It’s rough, messy, and overlong, but may well capture the well-intentioned spirit of what it’s trying to do better than the compromised version we got at release. It may even be something I revisit in the future — just maybe not all in one sitting.