By the end of the 1990s, both Damon Albarn and Jamie Hewlett were at a bit of a professional crossroads. Although Albarn’s main outlet — Britpop darling Blur — was still going strong after some stylistic reinventions, he wanted to expand his creative horizons even further and challenge assumptions about himself that arose from Blur’s many successes and controversies. Likewise, Hewitt was feeling increasingly disinterested in continuing his most fruitful comic book series — Tank Girl — after working on it for about 10 years (and seeing how disastrous the 1995 film adaption turned out).

Thankfully, a series of serendipitous events led the two artists to collaborate on something that would not only provide the solution for their restlessness but also yield arguably the most adored and daring project either has ever worked on: Gorillaz. Once cited as “Britain’s first virtual pop stars,” the cartoon quartet (vocalist Stuart Harold “2-D” Pots, bassist Murdoc Faust Niccals, drummer Russel Hobbs, and guitarist Noodle) allowed the duo to explore a vast array of styles — alternative rock, art pop, electronica, funk, soul, rap, folk, and even self-proclaimed “zombie hip-hop” — while working with myriad other musicians and producers. Along the way, they derived a wildly expansive multimodal pop culture universe through which they interacted with fans and perpetually fleshed out Gorillaz’s backstory.

Of course, the pair weren’t the first to hide behind drawn or digitized avatars (rather, they were following in the footsteps of acts like The Archies, Josie and the Pussycats, The Muppets, and Fire Bomber, albeit in markedly different ways); however, they were the first to push it this far and achieve such remarkable artistic freedom and mainstream fame as a result. In fact, their creative, critical, and commercial prosperity have only grown over the past two decades, and they owe it all to the global phenomenon that was their first LP, 2001’s Gorillaz.

Despite getting on quite well by 1998 — when Gorillaz began — Hewlett and Albarn weren’t on friendly terms when they first met in 1990. As the story goes, Hewlett interviewed Blur for Deadline magazine and found Albarn to be “arsey” and “a wanker”; afterward, Hewlett started dating guitarist Graham Coxon’s ex-girlfriend, Jane Oliver,  which contributed to why “all of them” started to “hate” him. That is, except for Albarn, who’d recently broken up with Elastica singer/guitarist Justine Frischmann and invited Hewlett (who’d since split with Oliver) to live with him in a flat in London’s Westbourne Grove. Naturally, the two bachelors spent a lot of time throwing extravagant parties (with guests including members of Radiohead, Pavement, and The Spice Girls) and watching television.

One afternoon, they were gazing at MTV and noticed how (as Hewlett puts it) there was “nothing of substance there.” Albarn explains, “This was the beginning of the sort of boy band explosion … and it just felt so manufactured. And we were like, well let’s make a manufactured band but make it kind of interesting.” So, they set out to create Gorillaz, a darker, edgier, and more developed take on their animated predecessors whose purpose was to combat the hollow, disingenuous, and “sinister” aspects of popular culture. Outside of their musical variety, the faux quartet’s humorously twisted histories and characterizations (such as Murdoc hitting 2-D with his car and Russell getting possessed by demonic spirits) aided in Gorillaz’s ingeniously transgressive purpose. (You could even say that they’re like a perverse mockery of how each Beatle was marketed with a designed personality.)

Interestingly, Albarn claims that Blur’s song “On Your Own” (from 1997’s Blur) was really the start of Gorillaz. By the end of 2000, he and Hewlett had their first official collection, the Tomorrow Comes Today EP. It contains three songs that would appear on Gorillaz — the title track, “Rock the House”, and “Latin Simone (¿Qué Pasa Contigo?)” — and their first music video (for “Tomorrow Comes Today”, which Albarn still loves). The EP also saw them begin collaborating with hip-hop producer Dan “The Automator” Nakamura, whom Albarn had previously worked with on Deltron 3030’s eponymous debut album and who was brought along for Gorillaz.

Obviously, they wanted their initial full-length release to be bigger and better in terms of scope and lineup. That meant delving deeper into styles like lo-fi, trip-hop, punk rock, alternative rock, psychedelia, and Latin music, as well as bringing in a host of guest players. Namely, Deltron 3030’s Del the Funky Homosapien and DJ Kid Koala contributed, as did Ibrahim Ferrer (Buena Vista Social Club), Miho Hatori (Cibo Mato), Junior Dan, Jason Cox, and husband-wife duo Tina Weymouth and Chris Frantz (Talking Heads and Tom Tom Club). To record and complete it, they split their time between Albarn’s Studio 13 in London and Geejam Studios in Port Antonio, Jamaica.

In addition to the usual promotional tactics, they doubled down on their multimedia ambitions by having Hewlett design a website to serve as the virtual home of all things Gorillaz (primarily, the fictional Kong Studios and each member’s personal living space). “[W]e just basically said we’re going to build [it] and slowly … fill it with more and more crazy stuff. There’s going to be no rules to it and it’s going to be like some mad shopping mall,” Albarn stated at the time. While it was never intended to appeal to children — as already mentioned, Gorillaz was a fairly adult concept — Albarn saw an added benefit in having the website “get kids into some of the best music around that they are never going to hear,” like hip-hop and reggae.

Although the subsequent singles (“19-2000”, “Rock the House”, and “Tomorrow Comes Today”) were highly successful, too, it was the public’s first taste of Gorillaz — “Clint Eastwood” — that truly opened the flood gates. Named after its use of the theme from The Good, The Bad, and The Ugly, it arrived on March 5th, 2001, and peaked at No. 4 on the UK Singles Chart and No. 57 on the Billboard Hot 100. Its exceptional music video (which references Resident Evil, Dawn of the Dead, and Michael Jackson’s “Thriller”) was played constantly on TV as well. Years later, Albarn named it as the best Gorillaz song, and deservedly so.

As for the album itself, it dropped on March 26th, 2001, and fared even better, landing at No. 3 in the UK (and going triple platinum) and No. 14 in America. (Unsurprisingly, it did well across Europe, too.) Expectedly, a multitude of special editions was offered — including ones for the UK, US, Korea, Malaysia, and France — each with their own set of bonus tracks, remixes, music videos, screensavers, video games, and other inventive incentives.

As for reviews, it received extremely positive feedback from Alternative Press, L.A. Weekly, AllMusic, Slant, and The Guardian — to name a few magazines — and was eventually ranked highly in year-end and/or decade-end lists from Spin, Q, Complex, and Kludge. It even earned them a nomination for the 2001 Mercury Music Prize (which was withdrawn at Gorillaz’s request because, as Murdoc supposedly saw it, winning would’ve been like “carrying a dead albatross round your neck for eternity”).

A big part of Gorillaz’s appeal has always been their live shows, and the brief tour for Gorillaz (across Europe, America, and Japan) was no different. Whereas Albarn and company are happy to perform as themselves today — as demonstrated by their December 2020 concert streams for Song Machine — they tried their best to uphold the façade of being a virtual band back then. That meant that Hewlett projected visuals onto a large cinema screen while the musicians remained hidden behind it. (Of course, the voice actors for the characters contributed, too, to really make audiences feel like they were watching 2-D, Murdoc, Noodle, and Russell.) Although it wasn’t the easiest or cheapest way to take Gorillaz out on the road, it was ultimately worth it.

In contrast to how many debut albums are almost rendered obsolete by the improvements of their successors, Gorillaz — like most of its distinctive follow-ups — remains very special, idiosyncratic, and worthwhile. Specifically, “Tomorrow Comes Today” is full of lo-fi purification that hints at the gloomier nature of Demon Days (just as “19-2000” foreshadows the electronic glossiness of their latest collections). Elsewhere, the alternative rock/trip-hop splendor of Plastic Beach clearly has its roots in the brilliantly schizophrenic “Clint Eastwood”, just as the folky poppiness of opener “Re-Hash” sets the stage for Gorillaz’s most song-driven side before “5/4” introduces a patchwork of punky bizarreness. The hip-hop symphony “Song Check (Gravity)” also stands out for its emotionally powerful emptiness prior to the joyously orchestral funkiness of “Rock the House”.

Two decades later, Gorillaz remains one of the band’s most cleverly and enjoyably eclectic sequences, with every track — mentioned above or not — revealing new sides of the duo’s wide-ranging adventurousness and aptitude. That feat, coupled with how it helped inspire the sounds and/or sights of names like Tyler, The Creator, The Amazing World of Gumball, Dethklok, Foster the People, and Flatbush Zombies, means that Gorillaz should still be celebrated for accomplishing precisely what Hewlett and Albarn set out to do 20 years ago.

Pick up a copy of Gorillaz here… 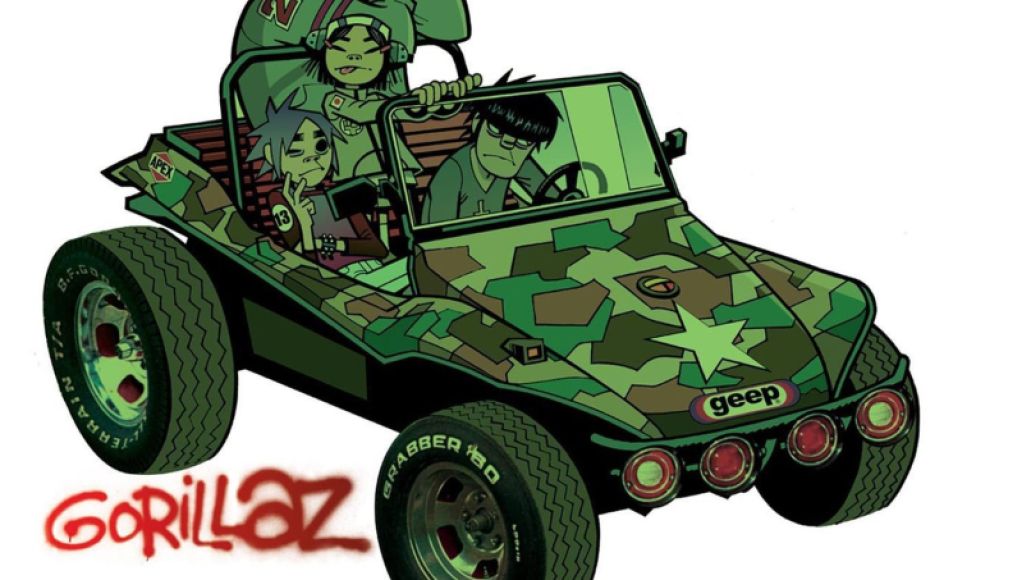