Led Zeppelin’s 1969-1975 run is one of the most electrifying in music history. As the London quartet evolved from earth-shaking proto-metallurgists to veritable gods among mortals, they redefined what it meant to be a rock and roll band, constantly torching and rewriting the rules on a whim. Volcanic guitar riffs, orgiastic vocal squeals, chest-beating swagger, quasi-spiritual musings — every classic rock convention that endures today, both brilliant and cringeworthy, either originated with or was perfected by Led Zeppelin.

The release of 1975’s mammoth, genre-hopping double LP, Physical Graffiti, consummated what Pitchfork’s Mark Richardson described as Led Zeppelin’s “imperial phase” — the moment when their stratospheric fame and unbridled creativity simultaneously peaked, cementing their status as the zeitgeist-defining rock band of the era. But no sooner did Zeppelin reach the pinnacle of their stardom than personal catastrophe threatened to destroy everything they had worked for. In August of 1975, singer Robert Plant and his wife, Maureen, were in a horrific car accident that left Plant with a broken ankle and required Maureen to get a blood transfusion in order to survive. The band canceled its massive US fall tour, and Plant decamped to Jersey in the Channel Islands to recover. He and guitarist Jimmy Page then relocated to Malibu, California, where they began writing material for Led Zeppelin’s seventh studio album, Presence.

Forty-five years after its release, Presence remains Led Zeppelin’s most obscure album, insofar as a chart-topping, triple platinum album can be obscure. Commandeered by Page, the LP contains Zeppelin’s hardest rockers since 1969’s Led Zeppelin II. Recorded at Musicland Studios in Munich, Germany, in 18 breakneck days so the band could clear out before The Rolling Stones began making Black and Blue, Presence finds Zeppelin at their most brooding and insular. It’s a taut, abrasive album whose seven songs are split between grinding, progressive epics and short, punchy blues rave-ups, with spartan production highlighting some of the band’s most blistering performances. It offers a lonely view from atop the misty mountain, as the band members reflect on what it took to build their empire — and whether they can possibly hold onto it for much longer.

Page’s influence is immediately evident from the seismic lead riff of album opener “Achilles Last Stand”, a 10-and-a-half-minute epic in the spirit of “Stairway to Heaven” and “Kashmir”. The guitarist frantically recorded a symphony of roughly half a dozen overdubs in one night; his dueling leads stab and slash through thick rhythm tracks while his solos soar heavenward, playing counterpoint to Plant’s anguished howls. The singer weaves the mythological tales of Albion, Atlas, and Achilles into his own story of he and Page traipsing through Morocco as tax exiles in 1975. (The title itself is a wry nod to Plant’s car crash injury, which rendered him immobile for a year and forced him to record his vocals from a wheelchair.) Drummer John Bonham and bassist John Paul Jones hold down a breathless, galloping rhythm that practically invented a new style of heavy metal and could be heard everywhere from Heart to Iron Maiden. “Achilles Last Stand” is a masterclass in composition, dynamics, virtuosity, and raw, unadulterated emotion. It proved Led Zeppelin could still go toe-to-toe with the fresh crop of rockers who had drawn influence from them and were now vying for their throne.

The labyrinthine guitar harmonies on Presence were some of the most ambitious Zeppelin ever attempted, but the actual sound of the album is almost sinister in its sparseness. The studio wizardry of Physical Graffiti is largely absent; the instruments explode out of the speakers and pummel the listener, with hardly a trace of reverb, delay, or even distortion to blunt the impact. This bone-dry production highlights the otherworldly chemistry between Page, Bonham, Jones — one bum note and their tightly coiled grooves would collapse. It also keeps Presence from sounding like a mere nostalgia exercise. The rollicking “Royal Orleans” and funky “Hots for Nowhere” evoke the band’s more direct, blues-rock jams of yore, but they lack the brightness and immediacy of “Communication Breakdown” or “Living Loving Maid”. Every song on Presence is engrossing, but it’s a stretch to call them catchy in the conventional pop sense.

Much of this change falls on Plant, who gives what may technically be his weakest — and certainly most exhausted — performance in Zeppelin’s discography. He sticks largely to a gravelly mid-range and hits high notes in the pinched wail that became more common after 1972 — likely side effects of recording from a wheelchair, but also years of debauchery. Yet, Plant’s weathered delivery serves the songs on Presence better than the full-throated roar of his youth, lending a credible paranoia to the lurching blues inferno “Nobody’s Fault but Mine” when he laments, “Got a monkey on my back, m-m-m-m-monkey on my back, back, back, back.”

First-time listeners may be tempted to dismiss album closer “Tea for One” as a tired retread of “Since I’ve Been Loving You”, but Plant’s vocals are the key to understanding both songs as mirror images of each other. “Since I’ve Been Loving You” crackles with sexual tension and fury as Plant rages against an unfaithful lover. On “Tea for One”, he bemoans the time spent away from his family while recording and touring, his voice cracking to devastating effect as he sings, “Time moves so slow.” It’s easy to imagine Plant striking a pose like Michael Corleone at the end of The Godfather Part II: perched in his wheelchair and gazing out a window, alone with his memories of sacrifice and loss, fighting a losing battle against the unstoppable march of time.

It’s plain to see why Presence polarized Zeppelin fans upon its release and continues to do so to this day. It lacks the grandeur of its immediate predecessors and the gut-busting hooks of the band’s earliest records. It requires listeners to sit with its songs, to untangle their gnarled riffs and evocative lyrics. Those who put in the work will discover some of Zeppelin’s most majestic compositions and spontaneous performances.

The years following Presence threatened to destroy Zeppelin, as Plant’s five-year-old son, Karac, died of a stomach virus, and Page and Bonham spiraled deeper into heroin addiction and alcoholism, respectively. The blues-rock titans sounded nearly unrecognizable on their keyboard-heavy 1979 swan song, In Through the Out Door, and in 1980, following Bonham’s untimely death from choking on his own vomit, they decided to call it quits. Led Zeppelin’s tenure ended with a sigh rather than a roar, and their tragic final years belied their unparalleled commercial and artistic hot streak in the late ‘60s and early ‘70s. The writing was on the wall as early as 1975, when the hobbled quartet began working on material for Presence. Yet, even as Led Zeppelin threatened to implode, they triumphed over adversity once more to deliver one of the most challenging — and rewarding — albums in their discography.

Pick up a copy of Presence here… 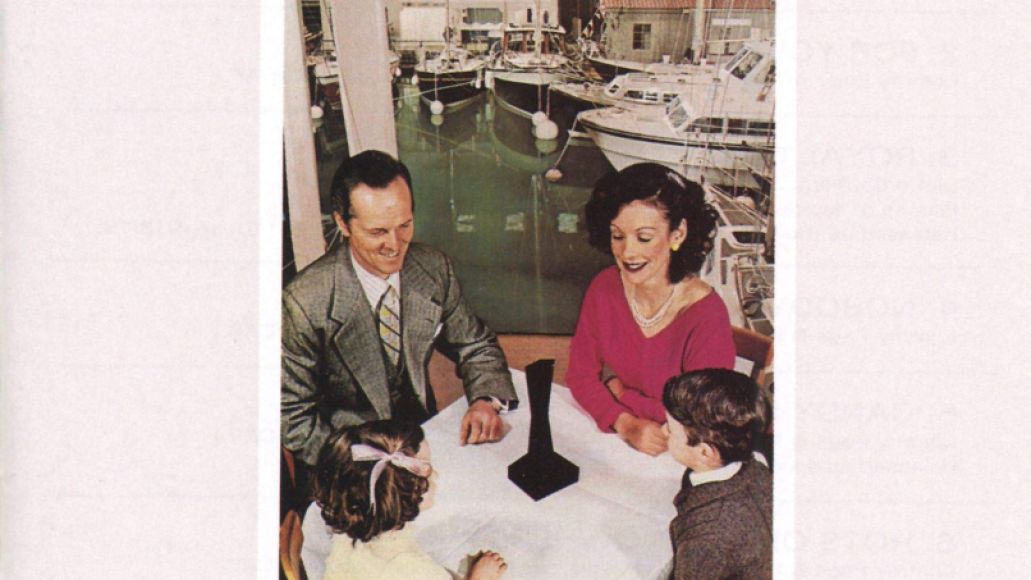