Last year, legendary Nigerian drummer Tony Allen was working on a new album when he suffered an aortic aneurysm and passed away at the age of 79. His collaborators have finished what he began, and the posthumous release There Is No End will arrive on April 30th, the anniversary of his death. You can catch a preview with lead single “Cosmosis”, which was co-written by Damon Albarn and features Skepta and Ben Okri.

Allen pioneered the Afrobeat sound, drawing influences from American jazz, Ghanian highlife, and Yoruba polyrhythms to develop new grooves that continue to resonate today. He built his towering reputation by collaborating on over 30 albums with Fela Kuti, and his skills were so advanced that when he left to pursue a solo career, Kuti hired four drummers to replace him.

Allen had intended There Is No End to become a platform for the next generation of rising rappers, and while he didn’t live to collaborate with all of them, he did lay down the beats with producer Vincent Taeger. In a statement, Taeger said, “Tony’s idea was to give rappers the space to breathe and freely create. He wanted really not to just do Afrobeat, but rather something new and open, with very different sounds for the drums for each song and feels and tempos that were really grounded to the core in hip hop.” In addition to Skepta and Albarn, There Is No End also features contributions from Danny Brown, Sampa the Great, and more.

Nigerian novelist and poet Ben Okri, whose words are heard on new single “Cosmosis”, was lucky enough to work with Allen. He recalled, “We were in the studio with Damon Albarn and Remi Kabaka and Tony said, ‘I lay out this universe in which dreams can come forth,’ and then I understood that for him the beat he lays out is like this textual landscape. It has a psychic structure or DNA of a universe of music for which Tony had worked out a kind of mathematical basis for it in his elliptical beats, and then an invitation to dream could be given.”

You can hear one of those “textual landscapes” on “Cosmosis”. It begins, as the whole project began, with Allen’s drums. Okri recites poetry about science, art, and fire, and Skepta spits a verse that covers aspirational love and spirituality. The backing track is sparse enough to hear every strike on the drum kit, as Allen toggles between  a deceptively-complex riff and near silence. The accompanying music video was directed by Navire Argo, and shows footage of the great man playing “Cosmosis”. Check it out below.

There Is No End Artwork: 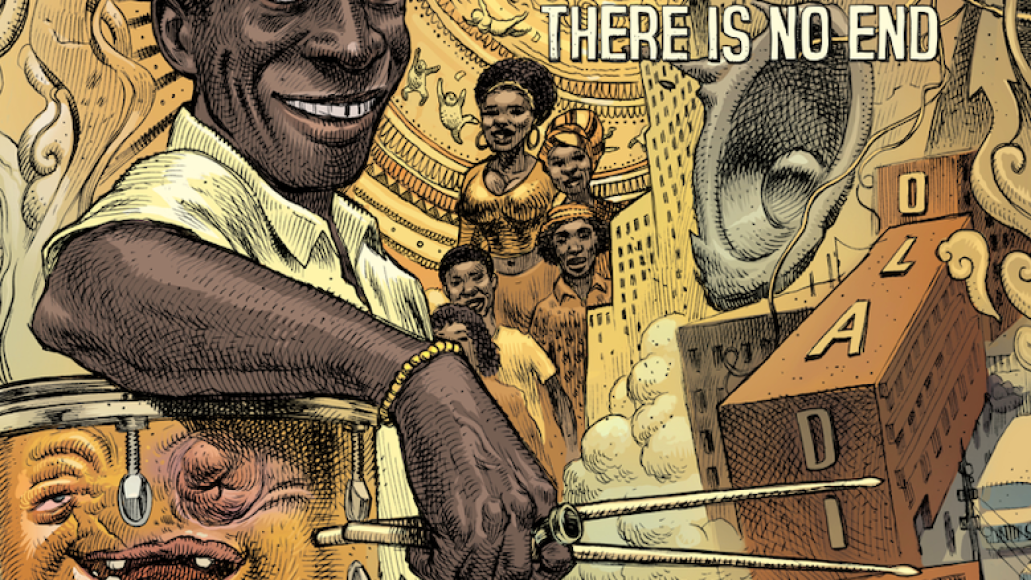