The Pitch: In the wake of the blip and the events of Avengers: Endgame, Sam Wilson, aka The Falcon (Anthony Mackie), has settled into a modest life of crimefighting with his signature wingsuit.

Why isn’t he the new Captain America?, eagle-eyed Endgame viewers might be asking; after all, Old Cap handed him the signature star-spangled shield the last time we saw him. Well, Sam feels uncomfortable with the weight and responsibility of the title — it feels “like someone else’s.” Meanwhile, former Winter Soldier Bucky Barnes (Sebastian Stan) is wrestling with his own post-terrorist trauma, struggling to reintegrate into society after ninety years of cryogenically-frozen evildoing.

But the two might get drawn back into each other’s orbits with the arrival of a mysterious flash mob-fueled radical movement (the leader of whom exerts mysterious super-strength), not to mention the U.S. Government’s decision to hand the shield Sam rejected off to a focus-tested, lily-white new guy (Wyatt Russell). Oh, and Baron Zemo (Daniel Bruhl) is set to show up at some point.

Seeing Past WandaVision: The Falcon and the Winter Soldier will either benefit greatly or suffer mightily from following up Disney+’s WandaVision, one of the most talked-about new shows of the past year. Say what you will about that show by its finale — which succumbed to the same CG laser fights as its cinematic predecessors — but its early stretches touched on some interesting experimentation with form and genre that even that show couldn’t sustain. From its early stretches, Falcon and the Winter Soldier is proper, meat-and-potatoes Phase 2 Marvel, drawing heavily from the house style Joe and Anthony Russo established from Captain America: The Winter Soldier onward — competent, albeit unremarkable action, coupled with ’70s-style conspiracy plots and a soupcon of four-quadrant humor. 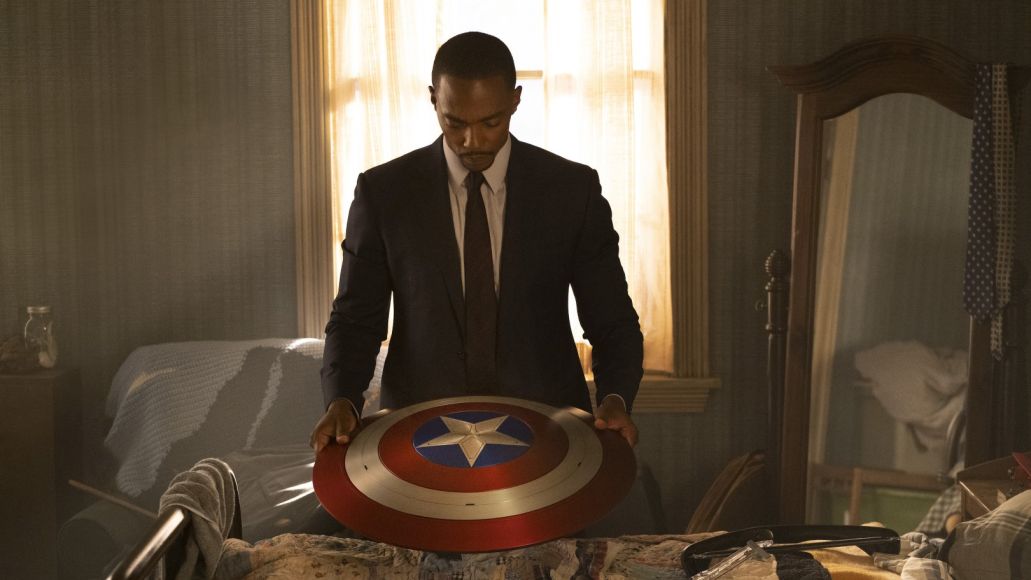 #NotYourShield: Where Falcon and the Winter Soldier succeeds is in its smaller, more intimate moments, particularly the ones involving Sam’s sister, Sarah (Adepero Oduye), and her family, which lets Marvel touch on issues of race in ways they hardly approach outside Black Panther. The pressure Sam feels to take the mantle is made even greater by his status as a Black man; it’s no accident that showrunner Malcolm Spellman has Sam hash out these issues with one of the only other Black Avengers, James “War Machine” Rhodes (Don Cheadle) as they walk through Cap’s exhibit at the Smithsonian. “We need new heroes. Ones suited for the times we live in,” Sam says; it’s a not-so-subtle reminder that superheroes shouldn’t just come in one color. The added sting of Cap’s eventually-anointed replacement being a white guy, then, is sure to complicate things as the series moves forward.

Those struggles extend to Sam’s family, too; turns out that being an Avenger doesn’t exactly pay the bills, and the fishing business his family has had for generations (and which sister Sarah has been keeping up while he was away) is in danger. The show explores (though doesn’t satisfactorily answer, at least yet) the socioeconomic effects of “The Blip”, which seems to have exacerbated the existing practices of financial institutions to discriminate based on race (aka redlining). It’s hard to get a loan if you’re Black and poor, even if you saved the world, as an uncomfortable scene with a supercilious loan agent proves. These elements are sure to be Falcon’s most intriguing additions to the Marvel Universe, especially given the power of Oduye’s screen presence. 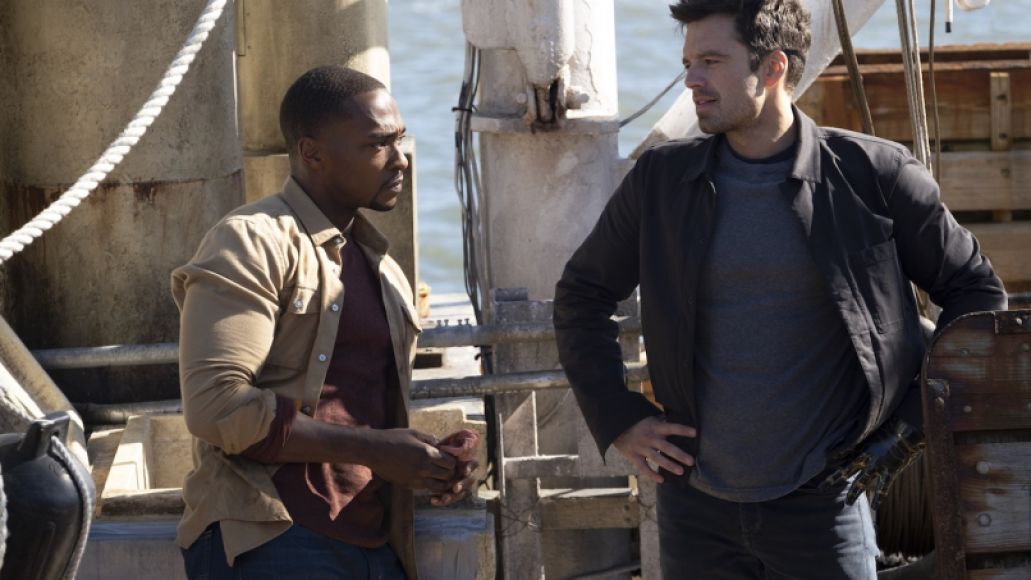 So Much Trauma! Less interesting, at least thus far, is Bucky’s half of the story, which essentially repeats Cap’s struggles to acclimate to the 21st century from Winter Soldier but from the perspective of a former bad guy. There are creaky, confrontational chats with snarky therapists, the furtive attempts to date, reconnections with old folks who don’t even know the extent of their connection to Bucky’s past, and so on. Stan tries to infuse these interactions with a give-no-shits gruff humor, but the material around him doesn’t give him much to do besides glower. Right now, we’re seeing both Sam and Bucky off on their own without the alchemy of their interactions to leaven their specific characters, which leaves their scenes comparatively flat.

An-TEEfa: But unlike WandaVision, this is an action-oriented spy show first and foremost, and the creeping threat promised by the series so far seems to be the “Flagsmashers,” an anarchist group who assembles courtesy of social-media gatherings, wearing black masks with red handprints over them so they can wreak anonymous havoc. So far, they’re comparatively unimpressive, doubly so when you start clocking the connections to cultural depictions of antifa as a roving mob of anarchists who just want to smash stuff for no reason. It’s a move that feels cloudy and a little disingenuous, not to mention dangerously playing into right-wing boogeymen of antifa anarchists trying to destroy the social order. 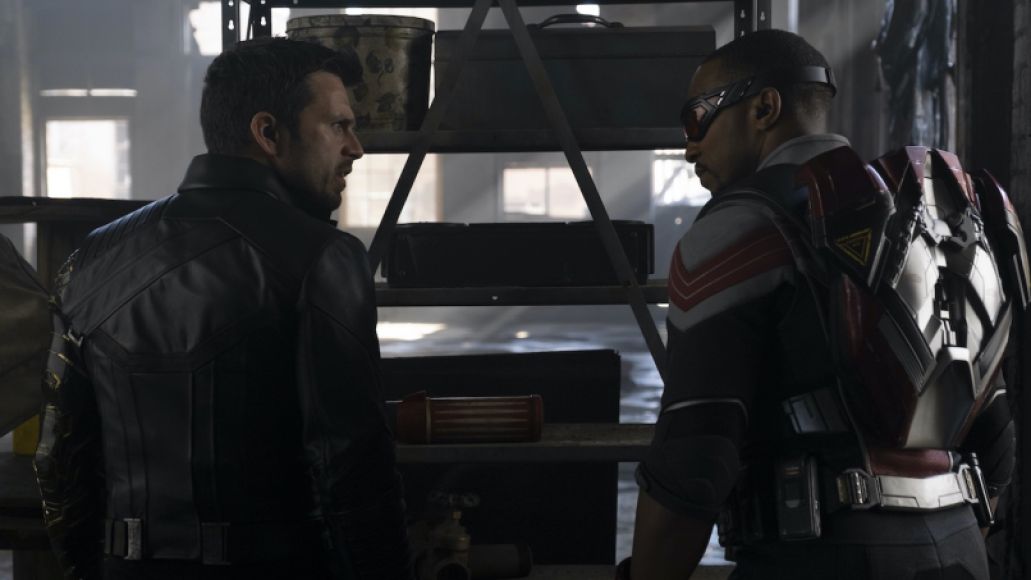 The Verdict: We’ve only got the first of the series’ six episodes to work from, but so far Spellman and director Kari Skogland have something winsome, if slightly average, in store for our heroes. There’s still a lot of ground to cover before the series gets humming — episode one gives us zero Zemo, not to mention bupkis from Sharon Carter (Emily VanCamp), who’s meant to appear — so let’s hope that the show picks up steam before its six short episodes run out. As is, it feels like the kind of average, franchise-placeholder fluff we’ve been expecting from Marvel’s Disney+ output, something which the big swings of WandaVision makes doubly disappointing.

Where’s It Playing? The Falcon and the Winter Soldier takes flight on Disney+ March 19th, with new episodes airing Fridays.

The Falcon and the Winter Soldier Stumbles Slightly on Takeoff: Review