Boris have announced a stream of their NO private release party performance, which was shot with a 360-degree camera. The “World Tour in Your Head” stream premieres on May 1st at 11 a.m. ET and will be available for viewing through the 10th.

Following the physical vinyl/CD release of their album NO, which landed on our list of the top heavy albums of 2020, the Japanese experimental band performed the record in its entirety behind closed doors at the Tokyo venue Fever in November of last year. A 360-degree camera captured the performance, which will finally be unveiled on May 1st.

Similar to virtual reality, viewers will be able to adjust their perspective freely in any direction during the streaming performance (pinch-in/out on tablets and smartphones or using the mouse to zoom in/out on desktops and laptops). Boris refer to this as a “tour in your head”, mimicking the participatory aspect of being an audience member at an actual live show.

“You will experience a Boris show where YOU are at center stage,” the band commented in a press release.

No two viewing experiences will be alike, giving the stream added replay value. Perhaps the first time you’ll want to gaze at the magnificent guitar playing and pedal work of Wata and Takeshi; maybe the next time, you give added attention to the charismatic drumming of Atsuo. The possibilities are unlimited as Boris seek a truly interactive “livestream” experience.

Boris on the Making of NO, Pandemic Existence, and the Uncertain Future of Touring

The band has been one of the most active heavy acts during the pandemic, releasing NO to acclaim in July 2020, opening a vast archive of rare and unreleased music, and dropping a new collaborative LP with noise legend and frequent co-conspirator Merzbow.

The 360-degree show will be free to stream on Boris’ YouTube channel with a $10 suggested donation that can be made directly to the band’s PayPal account. In addition, Holy Mountain Printing is currently taking pre-orders for a limited-edition T-shirt, which can be seen below. More information on the shirts can be found at this location. 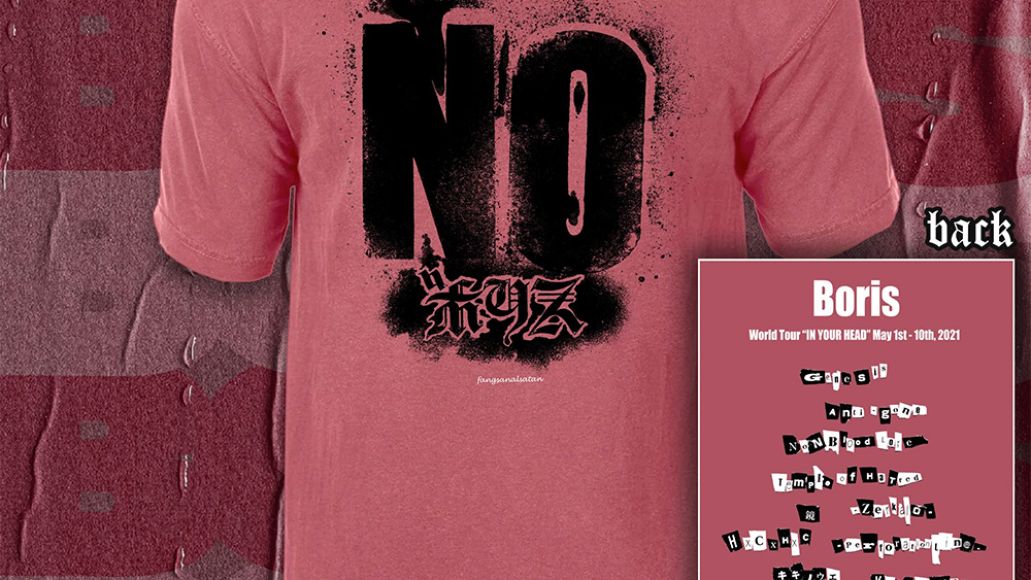