Setting the Stage: Like most artists who released new albums in late 2019, Korn did not get the opportunity to mount a widespread tour in support of The Nothing – as the COVID-19 pandemic took care of that (particularly a summer 2020 outing that would have seen them co-headlining with Faith No More). So, why not a global streaming event? Titled “Korn: Monumental”, the performance was broadcast Saturday (April 24th) from the set of the interactive Stranger Things: The Drive-Into Experience in Los Angeles, and produced by Danny Wimmer Presents (known for rock festivals like Sonic Temple, Aftershock, Louder Than Life, and more).

Taking the Stage: Beginning with a skyline shot of Los Angeles’ tall buildings at night, the camera shifted to the stage and close-ups of the un-manned drum kit and a guitar pedal board. Then the members of Korn — singer Jonathan Davis, guitarists Brian “Head” Welch and James “Munky” Shaffer, bassist Reginald “Fieldy” Arvizu, and drummer Ray Luzier – entered the stage against a white backdrop. And the “white backdrop” wasn’t just your average, ordinary prop. It soon turned out to be a ginormous video screen in back of the stage, which stretched far beyond the stage to the left and the right, and curved around the sides (a setup that Korn obviously would not have been able to utilize if they were playing in an arena where it would block the view of the attendees).

On the first song of the night, the live debut of “Victimized”, Davis sported a long black leather coat, while Welch displayed his long, flying dreads. Also immediately detected was that all five members were dressed all in black. Heck…even both 7-stringed guitarists played black guitars. Additionally, a lot of the trademarks remained, including Davis’ HR Geiger mic stand and Munky hunched over as he jumped up and down with guitar dangling.

From the get-go, the sound quality was impressive, particularly Davis’ vocals. However, one complaint was that for the first few songs, the performance fell victim to a camera style that has plagued other filmed concerts of recent times — quick edits that were only a second or two long before rapidly jumping to the next shot. So, it was difficult for the viewer to focus on any specific performer for a substantial duration of time (in other words, not like you would have been able to do if you were attending an actual concert by the band). But as the show went along, the shots became noticeably longer.

In time for the third song, “Insane”, Davis lost the long leather coat, and on “Falling Away From Me,” there were some great shots of the entire stage from far back, which once again gave visual evidence that the band was performing outdoors, as you once more saw the city skyline off in the distance behind the stage. By “Thoughtless”, Davis’ long coat reappeared (perhaps evidence that the setlist may have been rearranged after the fact).

Throughout the performance, graphics were continuously flashed on the screen behind the band, including images of what appeared like red mountainous terrain of Mars, the Korn logo, and other eye candy. Also, at various points of the performance, all three guitarists tested out the “spaciousness” of the stage behind where Luzier was situated — particularly during “Throw Me Away” (Fieldy) and “Can You Hear Me” (Head and Munky). Another cool-looking effect occurred at the start of “Coming Undone,” when colored lights were lit up up through the grating of the stage.

As pioneers of nu-metal, Korn have always been about uncommon sounds and sonics (particularly from their 7-string guitar duo), and “Justin” began with some sublime wah-processed guitars, while “Black Is the Soul” was undoubtedly the hugest-sounding selection performed of the entire set. “Alone I Break” also made good use of dynamics, while Fieldy danced and pranced during “Narcissistic Cannibal”.

After the final song, “Here to Stay”, the performance (which lasted slightly over an hour and ten minutes in length) ended with a bird’s eye view of the stage, which then expanded to an aerial view of the city.

Out of the several livestream shows we’ve witnessed over the past months, Korn definitely deserve kudos for offering up the best sounding one of them all — with specific props to Chris Collier (audio mix and mastering) and James “Fluff” Harley (audio engineer).

If you missed the show over the weekend, there’s still time to tune in. The concert is available on demand through Tuesday night (April 27th) at 11:59 p.m. ET). See the full setlist and gallery below (photos by Stever Thrasher).

Setlist:
Victimized
Cold
Insane
Falling Away From Me
You’ll Never Find Me
Thoughtless
Coming Undone
Throw Me Away
Justin
Black Is the Soul
Freak on a Leash
Alone I Break
Dirty
Can You Hear Me
Ball Tongue
Narcissistic Cannibal
Here to Stay 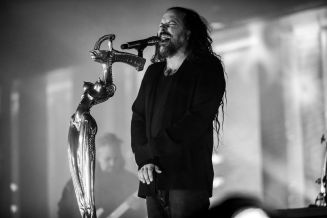 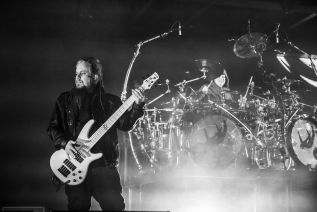 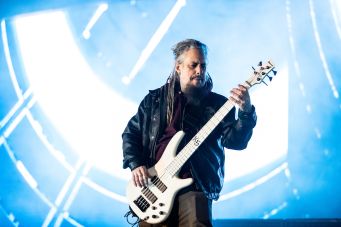 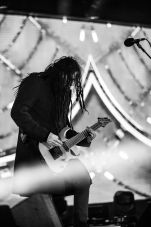 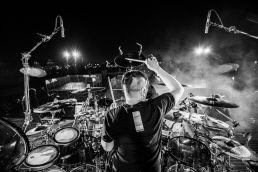 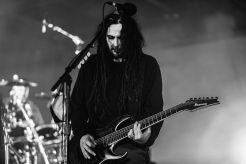 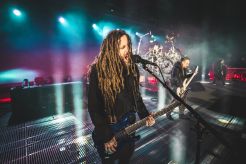