The Pitch: A bisexual college student struggling to figure out her career path (Rachel Sennott) attends a Jewish funeral service with her parents, where she attempts to juggle well-meaning family friends, a run-in with her ex-girlfriend, and an accidental encounter with her sugar daddy.

Social Anxiety on Steroids: Never have I wanted to attend a family function less than in Shiva Baby, Emma Seligman’s grand-slam of a feature directorial debut. Old flames, sugar daddies, and painfully awkward altercations with relatives are the sparks that set this 75-minute marathon of full-body-cringe rolling — and from the second Danielle sets foot into the Shiva, neither Seligman nor the torrent of stressors lets up.

To create genuine anxiety and stress in an audience is no easy task, and to sustain that tension throughout an entire feature is another feat in and of itself. Seligman conquers this feat by weaving together a violent, string-led score and a deliberate, headache-inducing sound design with frequent, sustained close-ups to create a debilitating, suffocating environment. This careful cacophony perfectly places us in Danielle’s shoes; it’s difficult to recall the last time a film grabbed me this brutally by the throat and refused to let go.

Beyond the stunning sound design and cinematography, the script itself is razor-sharp and eerily close to conversations one could picture themselves having in day-to-day life. It’s stuffed with breakneck dialogue between Danielle, her parents, and her ex Maya (Molly Gordon), leaving the cracks to be filled with the kind of bland, droning chatter you’d find at any family event. The film’s witty dialogue also helps to sustain its airtight pacing. With a runtime just north of 85 minutes, Shiva Baby doesn’t waste a single second, nor does it ever feel repetitive or dragging, despite taking place almost entirely in one location. 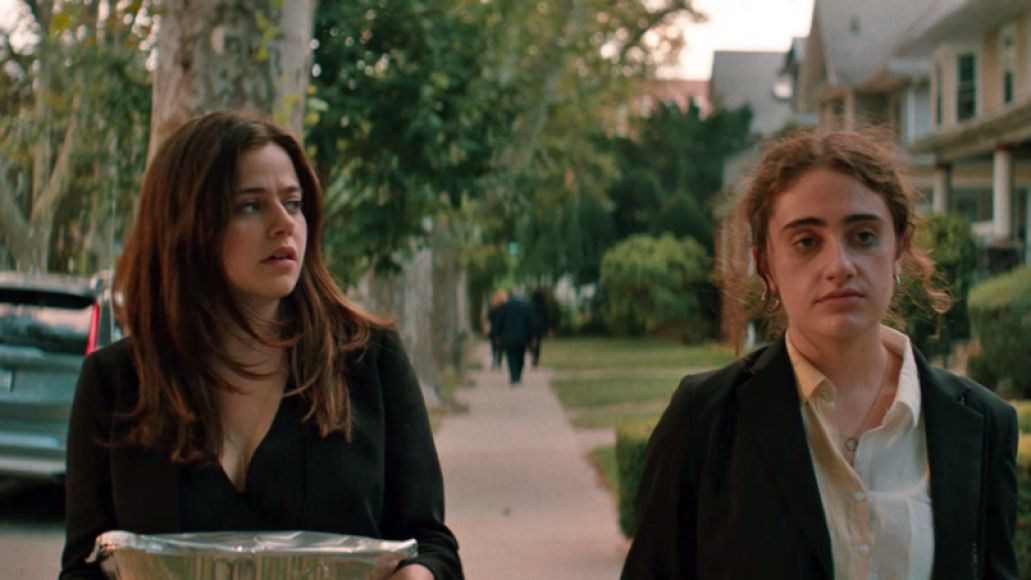 Sennott’s Star Turn: As excellent as the filmmaking itself is, though, a film like Shiva Baby lives or dies by the merits of its lead actress. Rachel Sennott’s eerily hypnotic and often far-too-relatable turn as Danielle takes an already excellent script and elevates it to the status of — dare I say — an instant classic. Danielle is a character thoroughly rooted in her Jewish identity and upbringing (the circumstances which set the tone for the film to exist in the first place), but you don’t need to be Jewish to appreciate and relate to her ever-growing horror at the nightmare of a Shiva unfolding around her as the day goes on.

Sennott carries Seligman’s slice-of-life dialogue with practiced ease: Danielle doesn’t feel like a film character so much as a girl you might know from your Intro to Gender Studies course. She’s grounded, relatable, easy to root for, and yet also unmistakably flawed in a way that sets the scene for Senott to showcase her dramatic muscles when the time arises. Sennott has a remarkable duality in her performance as Danielle, so much so that it’s difficult to pick a favorite between her comedic moments and her dramatic, heart-wrenching ones. She’s just that good.

Though, as sharp as Seilgman’s dialogue is, some of the film’s most devastating and brutally relatable moments are when she isn’t saying anything at all. Sennott has mastered the art of the disbelieving deadpan, and she can say more with a blank stare than most actors can with an entire monologue. Whether it’s munching on a bagel or eavesdropping on a father talking about his newborn child, Sennott naturally conveys the melancholy and despair that seemingly lingers under the film’s witty surface. 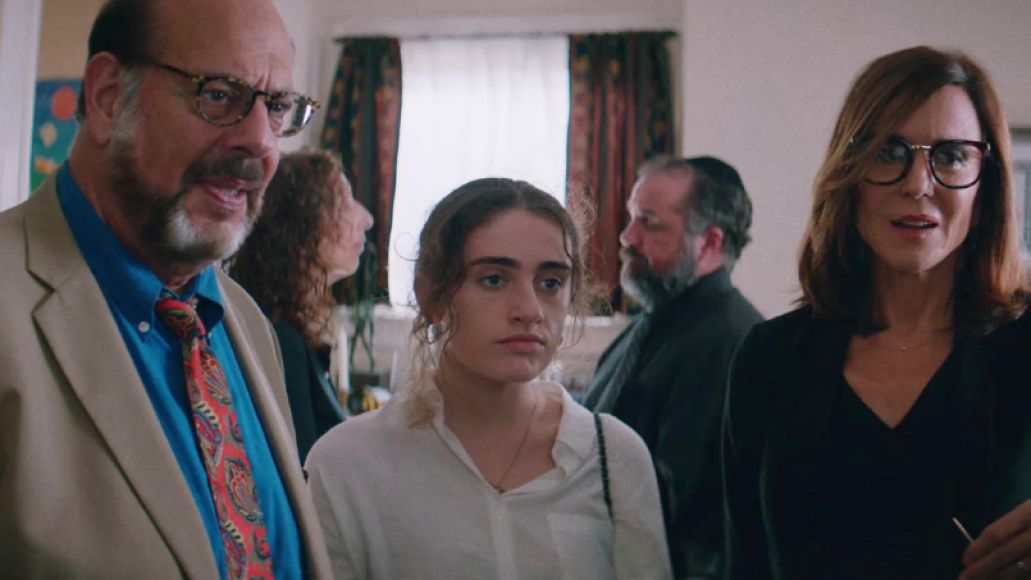 Friends and Family: Of course, though, a lead is only as good as her supporting cast, and Shiva Baby is filled to the brim with memorable funeral attendees and remarkably well-developed supporting players. Constantly keeping Danielle on her toes is childhood best friend/ex-girflriend Maya, with whom Danielle frequently clashes but even more frequently flirts with. Sennott and Gordon have an easy, natural chemistry that makes them believable as both friends and exes. Though Maya only pops in to up the dramatic tension, Gordon shimmers with depth and electricity that elevates would could have otherwise been a flat character.

Also tugging at Danielle’s many, many loose strings are Max (Danny Deferrari) and Kim (Dianna Agron) — Danielle’s sugar daddy and his beautiful young wife, respectively. The reveal that Max is not only a.) present at the Shiva, b.) taken, c.) MARRIED, and d.) a father is a brutal onslaught that collides with both Danielle and the audience with some delicious tension. As Max, Deferrari brings a brand of empathy and sadness that makes him an oddly endearing figure, while Agron serves as the perfect foil between the two as she slowly puts the pieces together amidst the Shiva. 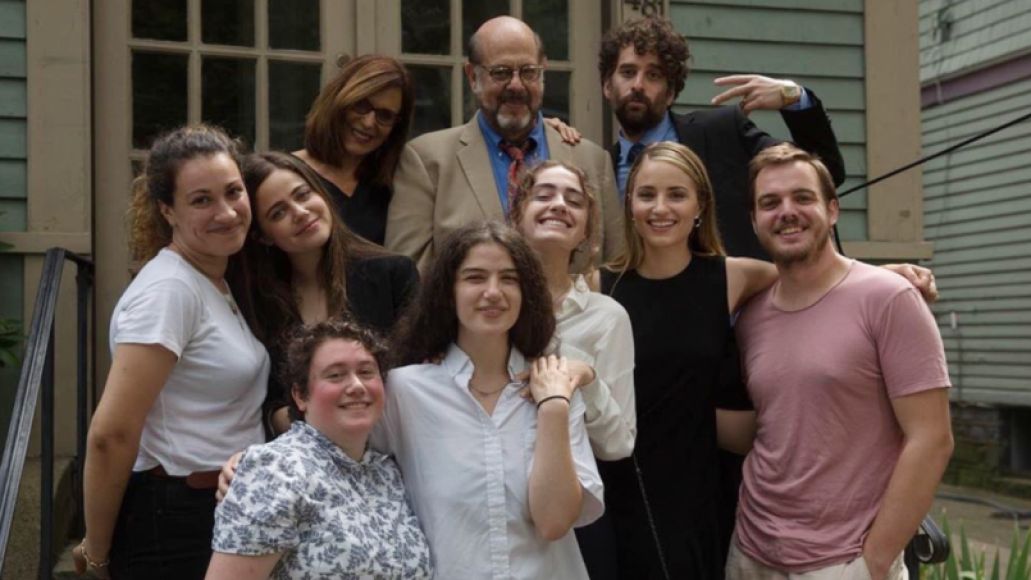 Rounding out the bunch are Danielle’s parents, Joel (Fred Melamed) and Debbie (Polly Draper), who effortlessly walk the line between annoying and endearing — the perfect balance for a pair of mischief-making parents. Joel provides some of the film’s most lighthearted moments with his hapless dad-joke humor, while Debbie’s dialogue is much more cynical, often critically so, of her daughter. Shiva Baby manages to pack a number of thematic layers in its compact runtime, but the emotional core between Danielle and Debbie is an unmistakable root that provides for some of the film’s most quietly tear-jerking moments.

But even the oddball attendees who only have a line or two every now and then are perfect. The mostly elderly ensemble is just the right mix of grating and well-meaning to instantly drum up memories of your most awkward family gathering. It’s an eclectic, charismatic cast that’s perfectly suited to handle Seilgman’s mammoth of a script — working in perfect harmony to create a maelstrom of anxiety-inducing nightmare fuel for Danielle to navigate.

The Verdict: Between its airtight script, claustrophobic visuals, and dizzying sound design, Shiva Baby is an assault on the senses that takes the stress of socializing and dials it up to 11, all the while telling a deeply personal and grounded story about a young woman struggling with identity. Paced to perfection and grounded by a magnetic leading performance, Shiva Baby is as painfully awkward as it is impossible to look away from.

Where’s It Streaming? Load up a bagel with plenty of schmear and catch Shiva Baby on VOD now.