“What stands out in my memories about the early Who? Well, Keith Moon, for one thing,” Roger Daltrey said with a hearty laugh during a 2018 interview when I asked him about his memories of the raucous, early days of The Who.

The peak of that pre-Tommy period is now celebrated in a new, expanded version of the band’s 1967 album, The Who Sell Out. It’s an astonishing look into a band at the first of many crossroads. Across the 112 tracks – including both the mono and stereo mixes of the album proper, singles and B-Sides from the period, as well as its post-Sell Out/pre-Tommy recordings, and Pete Townshend’s demos from the era – The Who shed the trappings of their My Generation-era Maximum R&B sound. They invent the rock opera and concept album; pay tribute to the Pirate Radio of Swinging London; dabble in product jingles, anti-smoking commercials, and spirituality; not to mention pay homage to the Pop Art movement with the album’s legendary artwork. All the while setting themselves apart from the then all-too-significant Beatles/Stones axis and setting the stage for their next act: Tommy and world domination.

But that day in 2018, having just finished writing his memoir and in the midst of promoting an album full of the kinds of songs he loved before he joined the band that made him a household name, Daltrey was all too happy to boil it down to remembrances of his late bandmate, who, along with guitarist and songwriter Pete Townshend and bassist John Entwistle, truly found a collective voice and purpose on The Who Sell Out.

“I think Keith had what you would now call some quite serious mental issues,” Daltrey went on that day, recalling Moon, who died in 1978 of a drug overdose. “Today he would probably be diagnosed maybe autistic, or even Asperger’s. But he was wonderful, and the most fantastic mimic I’ve ever known. He could vacuum someone’s personality off them, almost. He was one of the few people who could make Peter Sellers laugh. And that was something. Where the fuck did it come from? Because he was a working-class boy, like me, from Wembley. He had this vocabulary that was well beyond his education. He was extraordinary. He was incredibly talented and just the perfect drummer for us. Everything came together when he joined the band, and on The Who Sell Out, because we’d all gotten more comfortable in the studio by that time – he really shined.”

Daltrey’s bandmate Pete Townshend recently spoke with Consequence in detail about those heady days of 1967 that birthed The Who Sell Out, the spirituality and Pirate Radio that inspired it, plus what comes next for The Who. 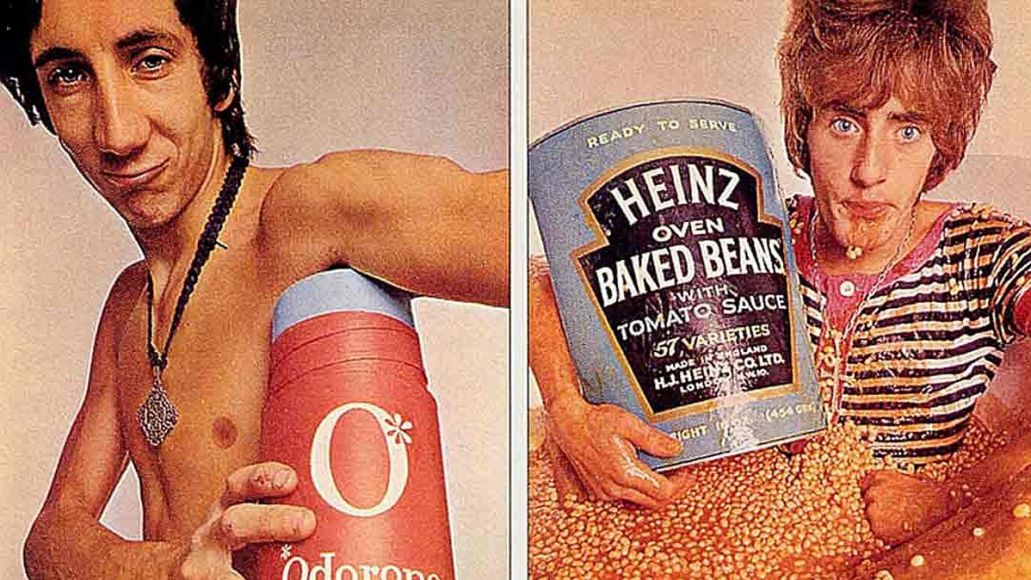 The Who Sell Out

2019 was incredibly busy for you. You had Age of Anxiety and WHO, and there was a lot of touring. This release isn’t around an anniversary of any sort, so did this project come out of the lockdown? Because it’s huge and I was wondering, did it come together because it was an archival project you could focus on during this period of relative downtime?

No, the work was done in 2017. It missed its anniversary because of the (then) forthcoming Who album. I don’t know when it was supposed to be scheduled, but subsequently COVID happened, and so it’s kind of been issued in the middle of nowhere. [Laughter]

The album is a turning point in so many ways. You say in the liner notes how it was a really momentous time for the band, but also I see it as peak Who, because everything flows from this moment. “I Can See for Miles” is very much a turning point. Do you see it that way from the inside looking out?

I don’t know. I think one of the difficulties for me is that The Who made so few albums – we were making less albums than other artists even back at that time – and because this album is indicative of a management and a record company putting immense pressure on us to release an album that we didn’t really feel was worth releasing. Not the finished album as it is — because it turned out to be a really cohesive idea – but the basic songs that I had didn’t feel, to me, to fit what The Who were doing or hoping to do at the time.

Richard Barnes (Townshend’s 1960’s art school roommate) took credit in his book for coming up with the idea of linking the songs together with radio jingles and ads. Is that true?

It’s been ages, but I think he told me he had the idea after you guys recorded Batman and told Roger at the time.

We all have ideas. I think the important thing is sharing them. And committing to them. I don’t know. Barney and I, funnily enough, we weren’t close at that time. He and I got back together as friends after my wife and I did Monterey. We had our acid trip, and we came back, and we’d got into Meher Baba, and if you read between the lines with Barney, he talks about coming to our house, finding us greatly changed, finding us both accessible and kinder and less stressed, and I think that was true at the time. Then, Barney was back in my life again.

But prior to that, there had been two years where I was living in London and Chelsea and Belgravia, and living my life, to be honest, either on the road with the band or hanging out in Chelsea with Chris (Stamp) and Kit (Lambert). And so, I didn’t see much of him at all. So, if he did have the idea, I don’t think that I knew. I can remember the moment it came into my mind, though. I was sitting in the Track (Records and Management) offices with Chris just desperate to find something. And, of course, the seed could have been planted by anybody anywhere. But a couple of other people have said to me, “Wasn’t it inspired by Sgt. Pepper’s?” I find myself thinking, “Fuck! No.” [Laughter]

It’s funny, too, that Chris pushed you so hard for a release. Listening to Disc 4 – which is all the post-album sessions, all that stuff that ended up on Odds & Sods – the band really caught fire then. If he’d waited just a few months, it could’ve been an even greater album.

And it then became an homage to Pirate Radio, because Pirate Radio had become significant at that time in England because BBC One was not playing, for the most part, pop radio.

It wasn’t playing any! There was one show, on Friday nights, hosted by a DJ named Brian Matthews. He was an avuncular figure wo would chat to pop stars about their process and he had The Beatles on, and he had The Who on. And you had to do live sessions. They wouldn’t play your records. And, of course, when we came to the States, FM radio had just started, and it was mind fucking. Hours of amazing American and modern music and old music, or even some jazz and classical music mixed in, on a radio station in the middle of the night, with no commercials at all! We longed to have that. So, when Pirate Radio started, it was like, a liberation. It must have helped everybody. It must have helped The Beatles.

You mentioned Meher Baba, and I want to pick up on that, because your writing becomes more expansive here. Early on, you were trying to write hit singles, and there was the R&B model, and then everyone was working in the Ray Davies/Lennon/McCartney model, too. But by the time of The Who Sell Out – and especially on the bonus tracks here – you’re doing your own thing. The subject matter becomes broader and more introspective, but macro, too. There’s an elegance and a seeking nature to the lyric writing that shifts in this moment, pre-Tommy. Talk a little bit about what following Meher Baba brought to the table, or was it just sort of the times and where you were headed as a writer generally?

Well, I think I might have discovered Meher Baba a fair few months later than these sessions. The fact is that what was actually going on for me was that, even before I heard about Meher Baba through Mike McInnerney, who was the artist who drew the Tommy cover, I was starting to feel that there was something missing. But the metaphysical, esoteric dabbling stuff, it was sort of the fashion of the time. The Moody Blues had just formed and were writing lots of stuff about it. The Beatles had their guru. It was just starting to happen.

And one of the things that was happening to me, of course, is that I was starting to track into the fact that the way that my mind worked, and the way that my personality worked. You know, I think it’s possible that I have some kind of dissociative personality disorder. I don’t know, but I really don’t know who I am when I perform on stage. I don’t even sort of like that person very much, besides the fact that he is the person that people know me as. So, I was just beginning to delve into that stuff. And I think when I found Meher Baba, he answered some of the questions that I was carrying.

So, let’s end where we began: The Who – and you in particular – were really busy pre-pandemic. What do you think the state of the business will be once things get back to some sense of normalcy?

I don’t think anybody really knows what the hell is going on. Live Nation have told us that next year, between April and September, when they normally have 25 big tours going out, they’ve now got close to 50. And also, there’s a demographic thing that’s just being felt out, which is if older audiences will be willing to put their dollars into buying tickets, because they can get burned. Because they’ve not had their money back, specifically in Europe. Or they just won’t feel safe and won’t flock back to shows the way some people think. So, yeah, there’s a temptation to just say, “Fuck off.” But it’s what I do, so we’ll just have to see.

Pick up The Who Sell Out (Super Deluxe Edition) here…