After 12 long years of occasional shows but mostly relative silence, Kings of Convenience are finally back. The Norwegian folk duo, comprised of Erlend Øye and Eirik Glambek Bøe, has returned today to announce a new album. It’s called Peace or Love and it’s due out June 18th via EMI. Celebrate the news by streaming the lead single “Rocky Trail”, which they’ve shared alongside a video, below.

Peace or Love is the band’s fourth studio album overall, following 2009’s great Declaration of Dependence. The new record spans 11 tracks in total, including “Rocky Trail” and two other songs — “Love Is a Lonely Thing”  and “Catholic Country” — that allegedly see Kings of Convenience teaming up with the one and only Feist, according to Apple Music.

“Rocky Trail” picks back up right where Kings of Convenience last left off. It’s breezy, detailed, and beautifully intimate — the type of single where acoustic guitars blossom into stunning floral bouquets alongside delicate vocal harmonies. “Another classic Eirik composition that skillfully ignores the verse-chorus-verse blueprint,” Erlend said of the song in a press release. “It’s pop music, but not as we know it.”

In the song’s accompanying music video, directed by Detour, Kings of Convenience can be seen performing the song together in an open, white studio space. The building is full of minimalist artwork, burgeoning plants, and smiling friends who twirl around the band as they go about rearranging various items in the room. It’s all shot in one take, giving the feeling of a dizzying hangout that leaves you feeling charmed by the little moments in life.

Pre-orders for Peace or Love are currently ongoing at the band’s website, including a limited-edition white vinyl pressing. Check out the cover artwork and full tracklist after the jump. 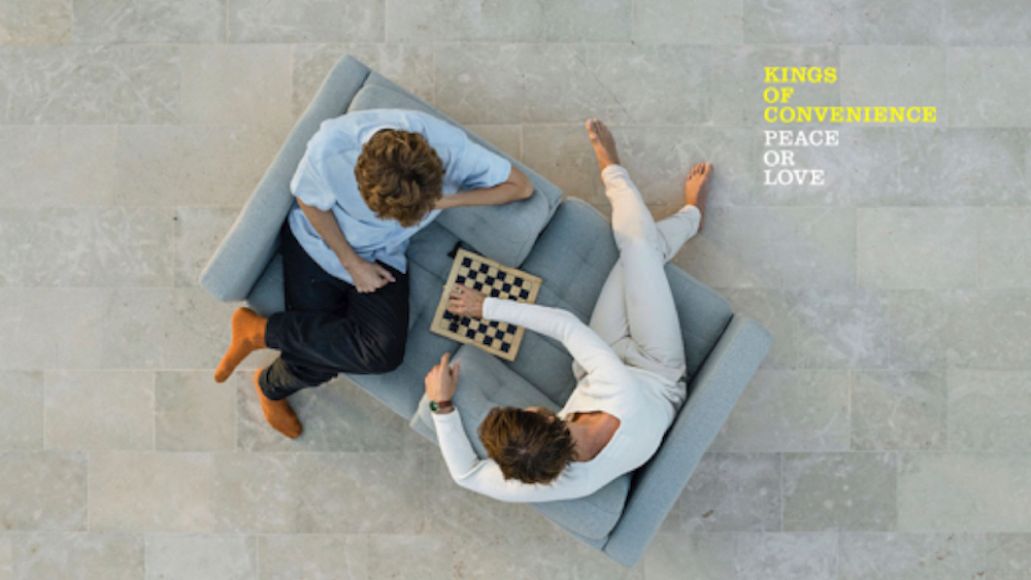