Livestreaming has been embraced out of necessity over the last year, but even when things return to “normal,” it doesn’t look like the format is going anywhere. In fact, it’s only going to become more advanced. Live Nation and the Veeps platform have announced a partnership that will equip over 60 US venues with turnkey livestreaming capabilities. Launching the new joint effort will be a series of livestream concerts broadcast from Los Angeles’ The Wiltern.

The innovative deal finds Veeps, co-founded by Good Charlotte’s Joel and Benji Madden, installing their livestreaming setups across a number of venues at which bands frequently stop on their tour routing. Should the artists so choose, they’ll be able to broadcast their concert to fans around the world, vastly extending their reach far beyond the in-person capacity.

Venues that are part of the early rollout include both The Fillmore in both San Francisco and Philadelphia, Chicago and New Orleans’ House of Blues, the Bay Area’s Shoreline Amphitheater, and George, Washington’s The Gorge.

The first location to send shows out on the digital airwaves will be LA’s The Wiltern, which will host The Wiltern Livestream Series from May 7th through July 8th. Performers taking part in the 10-show series include Freddie Gibbs, Young Thug, Young M.A, Breland, JP Saxe, LANY, Waterparks, Lucky Daye, Eyedress, and Chase Atlantic. The full schedule can be seen below, and virtual tickets going for $15 can be purchased via The Wiltern’s website.

“Amongst artists, it’s often said that the one side of our careers that truly belongs to us is touring. To help an entirely new touring vertical become readily available to artists is such a huge win for our community and we couldn’t be happier. It’s the exact type of thing that shows what our partnership with Live Nation can really mean for artists. Now, with the flip of a switch, every artist playing in these venues can make their show a global event. We’ve already seen how livestream shows drive engagement across every other area of an artist’s business and the added ticket revenue will allow them to re-invest in their art and make what they’re offering their fans even better. It’s a real dream come true for us at Veeps and our mission to help empower artists in their careers.” 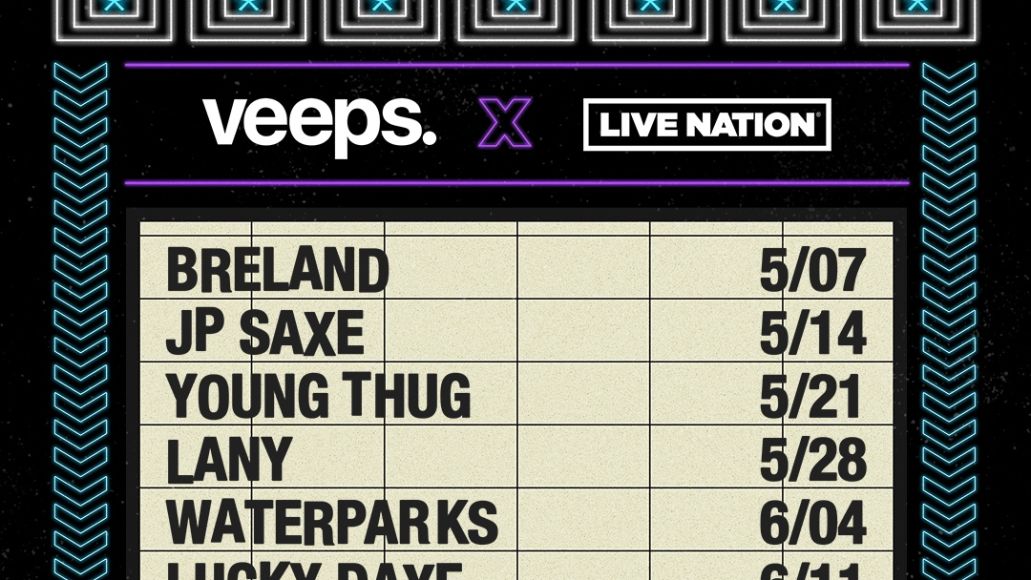