With our new music feature Origins, musicians give intimate insights into what inspired their latest single. Today, Spud Cannon reveal how they made “Juno”.

There’s a familiar, joyous tension just before a college night out. As you’re getting ready with your friends, the electricity of possibility crackles like the laughter of pre-game drinks. The city outside the door feels wide open with possibility, evening air beckoning for carefree rambunctiousness. A year into the pandemic with a swiftly approaching summer and hope on the horizon, it’s like we’re all university students again, waiting for that wild weekend freedom.

It’s a feeling that’s gratefully creeping back into our world, and one Spud Cannon captures with playful immediacy on their new single “Juno”.

The Poughkeepsie five-piece of recent Vassar grads chug out frantically fun riffs like they’re downing shots before heading out the door. Breezy in its tautness, the track barrels forward into the night with openhearted potential. “Got a feeling I could be someone/ Got a feeling that I’m never gonna give it up,” sings lead vocalist Meg Matthews, as if she’s pulling her jacket on like a superhero’s cape.

Take a listen to “Juno” below, followed by the band’s Origins of the song. 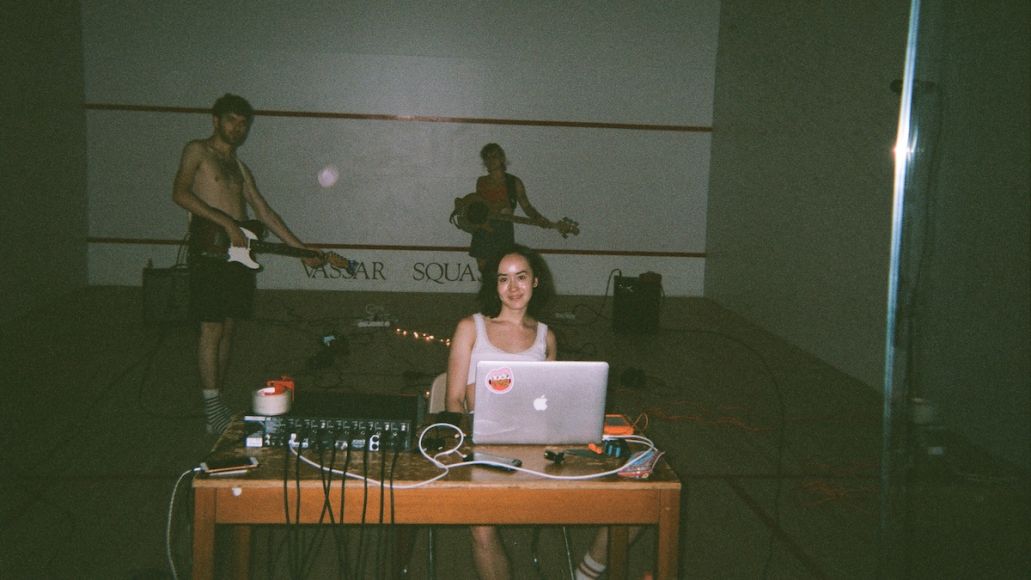 It was the spring of 2019: we were on the verge of breaking up, I was on the verge of graduating, and we had no budget for a third album. After every legitimate venue on campus was booked up, we opted instead to throw a secret show in the squash courts at the suggestion of Lucy, who thought the court’s location would make it easier to evade security. The show sounded terrible, but during our ‘soundcheck’, I thought the court sounded magnificent. I’ve always adored the Beach Boys wall-of-sound style, and suddenly the mere thought of recording an entire record in the squash courts consumed our imaginations. That summer, we’d hang out at Meg’s house in Poughkeepsie, write, party, and on the final day of each ‘mini-vacation’, head to the courts. We’d wedge a door, wait till after closing time, and then sneak in with all of our gear and record from 12am-6am before they opened in the morning. We wanted to capture our live sound, so we recorded together, sans metronome, and decided we’d need to get pure takes of each song. While some came easy, “Juno” was arguably the hardest. It took two separate nights, and I think in the end we did something like 70 takes overall to get one we were happy with. — Jackson Walker Lewis (guitar)

A Thunderstorm Outside the Mug: 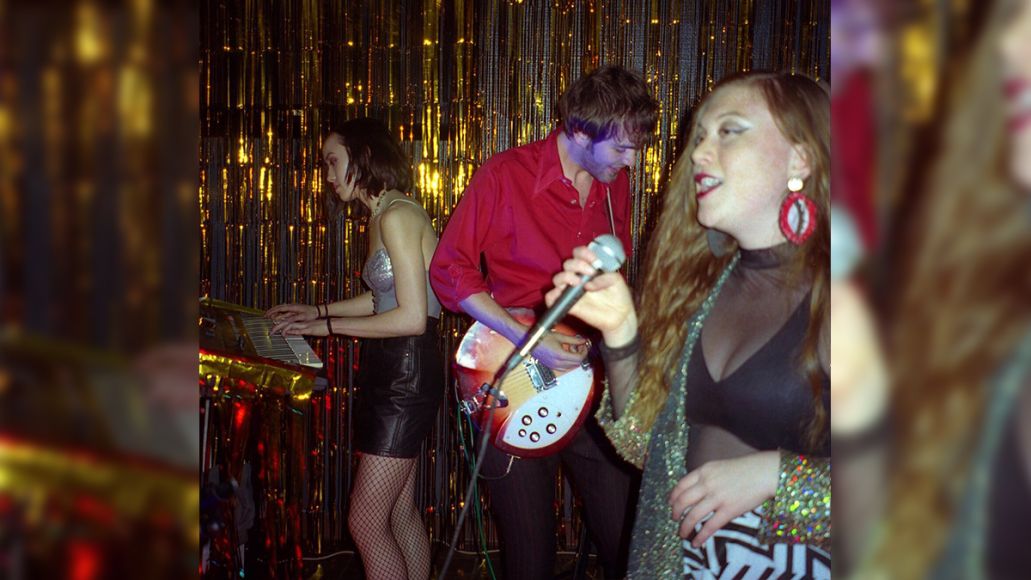 The Mug, photo by Ella Baum

We started writing this song during an intense thunderstorm in The Mug, Vassar’s underground venue/used-to-be-bar/“practice space”. In retrospect this is quite fitting, as “Mug Nights” are known for attracting sweaty hoards of hopefuls looking for a wild night of drinking, dancing and making out… Maybe leftover party vibes were lingering in the air, maybe it was the lightning above — but I remember being stoked on this song from the first run. The chorus locked in pretty quickly, and the words I mindlessly put to its vocal melody were, “Had a feeling he could be someone, had a feeling and da da da, da da da” — so from the beginning, it was about some kid with potential. It took a year of occasionally returning to this song to iron out the verses, and I had a hard time settling on a verse melody, which I wanted to feel playful and punchy — letting the chorus lift off into a total release of any bad energy. Like the night imagined in the lyrics, the process was full of ups and downs, fun and frustration. — Meg Matthews (lead vocals)

Coming-of-age movies in general have always been a large inspiration for our sound, but I love this movie in particular. It was my junior year winter break and I vaguely remember hurriedly writing the intro riff and chorus chord progression in my parent’s basement. To be quite honest, I didn’t think much of it at the time — the only reason I remember writing it at all is that right afterward my friend Jared Hoffman took me to this fantastic pork bun place called Oi in LA. I don’t think it’s there anymore, but it became one of our favorite places to eat. When Jared was picking me up to go, he came down to the basement, I played him a quick demo of the two parts, and he remarked that it sounded like “it could be in one of those coming-of-age movies.” I must’ve rewatched Juno on TV the night before because that’s the first one that came to mind. Though most demo titles don’t stick, this one did. — Jackson Walker Lewis (guitar) 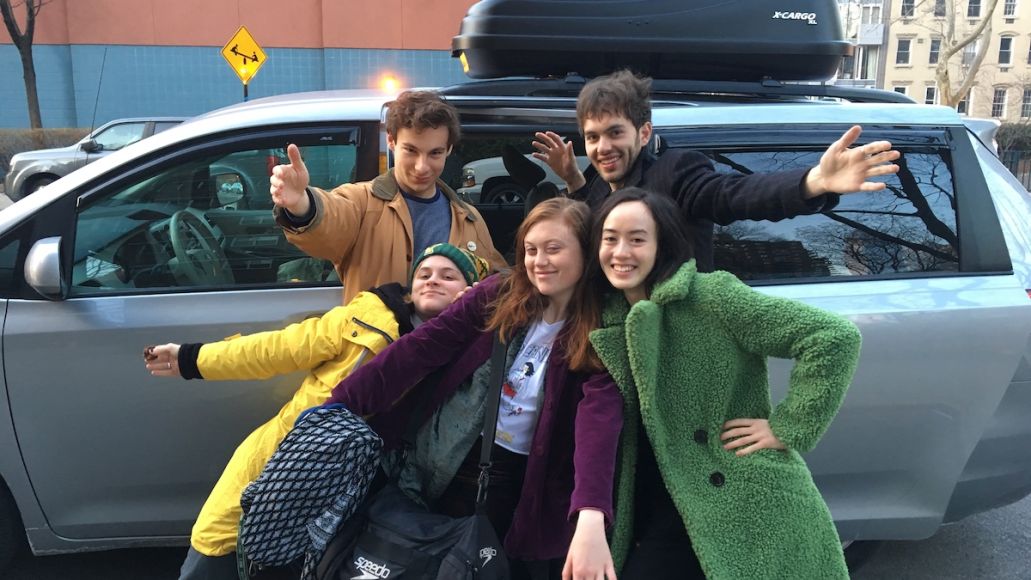 On the road from Portland, ME to our last tour stop in Montreal, we set out to write lyrics for “Juno”. During a pre-tour jam session, Meg came up with the line “Had a feeling I could be someone” and the song quickly became a story of a chaotic night out. We each drew on memories of bad club experiences: missing your cab, spilling your drink, getting rejected. Once the lyrics started coming together, the song became a composite story of rolling with the punches. Unlike the majority of our songs, Ben and Jackson contributed lyrics for the verses on “Juno”, and in a way I think the song takes on a sense of our collective personality. At the end of the day, it’s that feeling of being intent on having a good night out, and coming out victorious even when the odds are against you. — Ariana Bowe (keyboard) 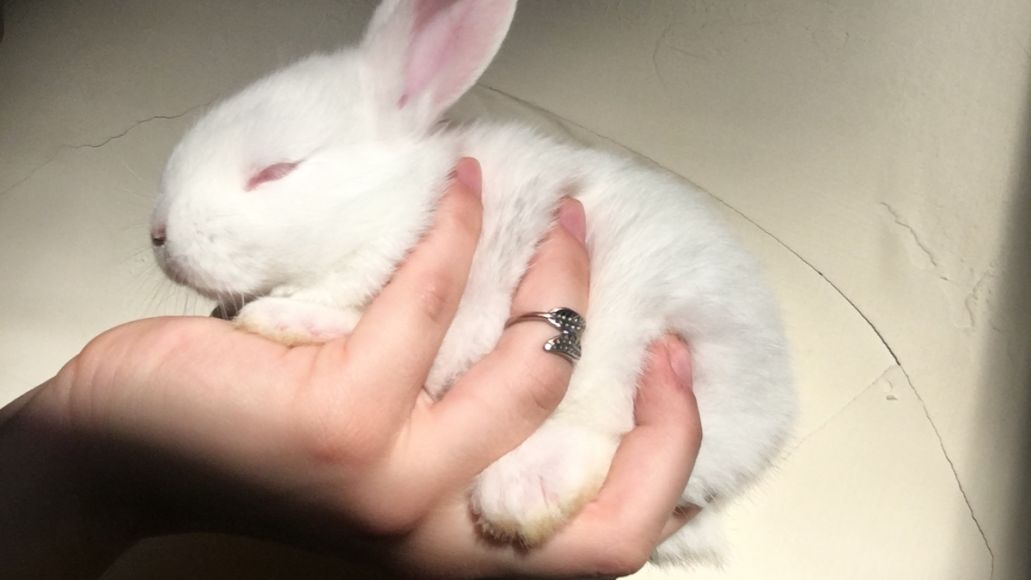 At the end of the school year I adopted two rabbits off of Craigslist. They did what rabbits do and I ended up with six more adorable little buns. Sentimental about the classic coming-of-age movie, I named the mother Juno. Funnily enough, I had no idea Jackson was also inspired by the movie, and my decision to name the bunny was completely independent. She was sweet, affectionate, fun-loving, and a perfect model for our cover photo shoots. I think of her whenever we play the song. — Lucy Horgan (bass)